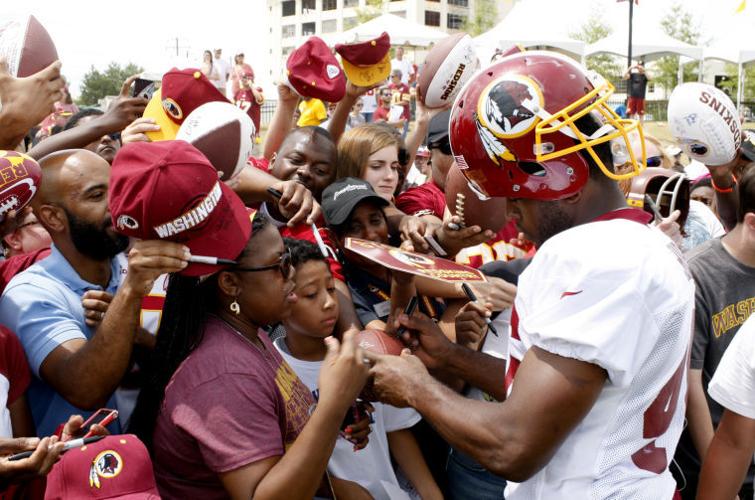 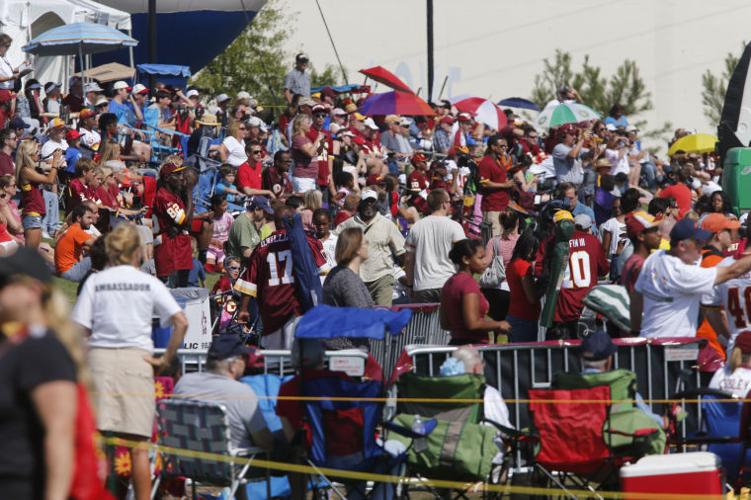 Fans continued to flock to the Redskins during second day of training camp in Richmond, Va. 7/26/13 At Bon Secours Washington Redskins Training Center.

The opening whistle blows on training camp at 8:35 this morning, and new Washington Redskins coach Jay Gruden won’t waste time getting down to business.

He wants to use his time in Richmond to install plays and build team cohesiveness. Almost a third of the roster has turned over from last year.

Add workouts with the New England Patriots, and there will be no shortage of on-field competition.

The workouts differ from watching a game on Sunday afternoons, though. Here’s a guide for the eyes.

Cornerbacks will do footwork drills, linebackers will work on stripping the ball from a tackling dummy, and quarterbacks will practice throwing the ball.

Two of the more animated coaches are outside linebackers coach Brian Baker and secondary coach Raheem Morris — both can be heard if you’re close enough to the field. You’ll also want to keep an eye on the quarterbacks, who are wearing yellow jerseys (indicating that they are not to be hit during full-contact drills).

Many days, the position drills will be followed by a period of one-on-one competition.

This is the best time to watch the offensive and defensive linemen, particularly on full-contact days, when they go head to head and work to gain leverage. Unlike most drills, during which it can be tough to distinguish good and bad performances by a lineman, it immediately becomes clear during individual competition.

The receivers and cornerbacks are also worth watching, as cornerbacks try to maintain one-on-one coverage. Things can get particularly contentious on days when NFL officials are monitoring the workout and calling pass interference.

While the Redskins won’t play a full scrimmage, coach Jay Gruden will put the team in different situations to test plays — offensively and defensively.

That’s why you may see the team often repeat a third-and-long situation, testing different personnel groupings and plays.

Often, a coaching assistant will show the play on paper so other teammates can mentally follow the action.

Gruden won’t allow full tackling during most workouts. He’ll blow the whistle as soon as a player is touched or wrapped up.

Interspersed with the workout will be a handful of special teams sections. Players not involved with the units will take a water break during this time while the punting and kicking units get their work.

Some coaches will save field goals for the last session of practice, and put stakes on the kick — usually, the players can skip their final running drills if the kicker makes his kick.

Coaches do this to simulate the pressured atmosphere of an in-game field goal — or at least come as close as possible.

The optimal viewing location depends on why you’re visiting camp. If you’re after autographs, the best place to be is the first row, standing closest to the ropes where the players walk around and sign after workouts.

From the first row, however, players, team employees and media all obstruct the view.

If you’re there to watch the practice, it’s best to sit on the hill that runs parallel to the fields. Most fans on the hill bring lawn chairs, blankets, or other seating, as opposed to the fans up front, who stand for the entire workout.

Like a game, the best view is closest to the 50-yard line, where you can see both ends of the field. At last year’s practices, the hill filled first on the side closest to the entrance, with the opposite site reaching capacity much later.

Because the action doesn’t precisely resemble a game, it can be tough to follow the ebbs and flows of practices.

There are advantages to attending camp. Media are prohibited from reporting anything that might compromise the team’s game plans for the season, so being there is the only way to see key details that will go unreported.

This season, one of the biggest things to watch will be how many running plays are installed for quarterback Robert Griffin III. Route running will also be interesting, as Griffin learns to distribute the ball between star receivers DeSean Jackson and Pierre Garcon.

On defense, training camp will be an opportunity to see some of the blitzing schemes coordinator Jim Haslett has cooked up for this year. Watch for rookie Trent Murphy, who may share the field with Brian Orakpo and Ryan Kerrigan on third-down, pass-rush situations.

With so many versatile offensive linemen fighting for jobs, those players should experience an unusual amount of competition.

But don’t overanalyze. With 10,000 fans in attendance, sit back, follow the cheers and enjoy your day at training camp.

The Washington Redskins expect to turn over as many as 20 of their 53 roster positions this year, but the personnel shift doesn’t correlate wi…

Learn where the Redskins have held their training camps over the years.

Washington Redskins coach Jay Gruden led his players through conditioning drills in the heat of the day Wednesday afternoon, clearing 86 of th…

Fans continued to flock to the Redskins during second day of training camp in Richmond, Va. 7/26/13 At Bon Secours Washington Redskins Training Center.