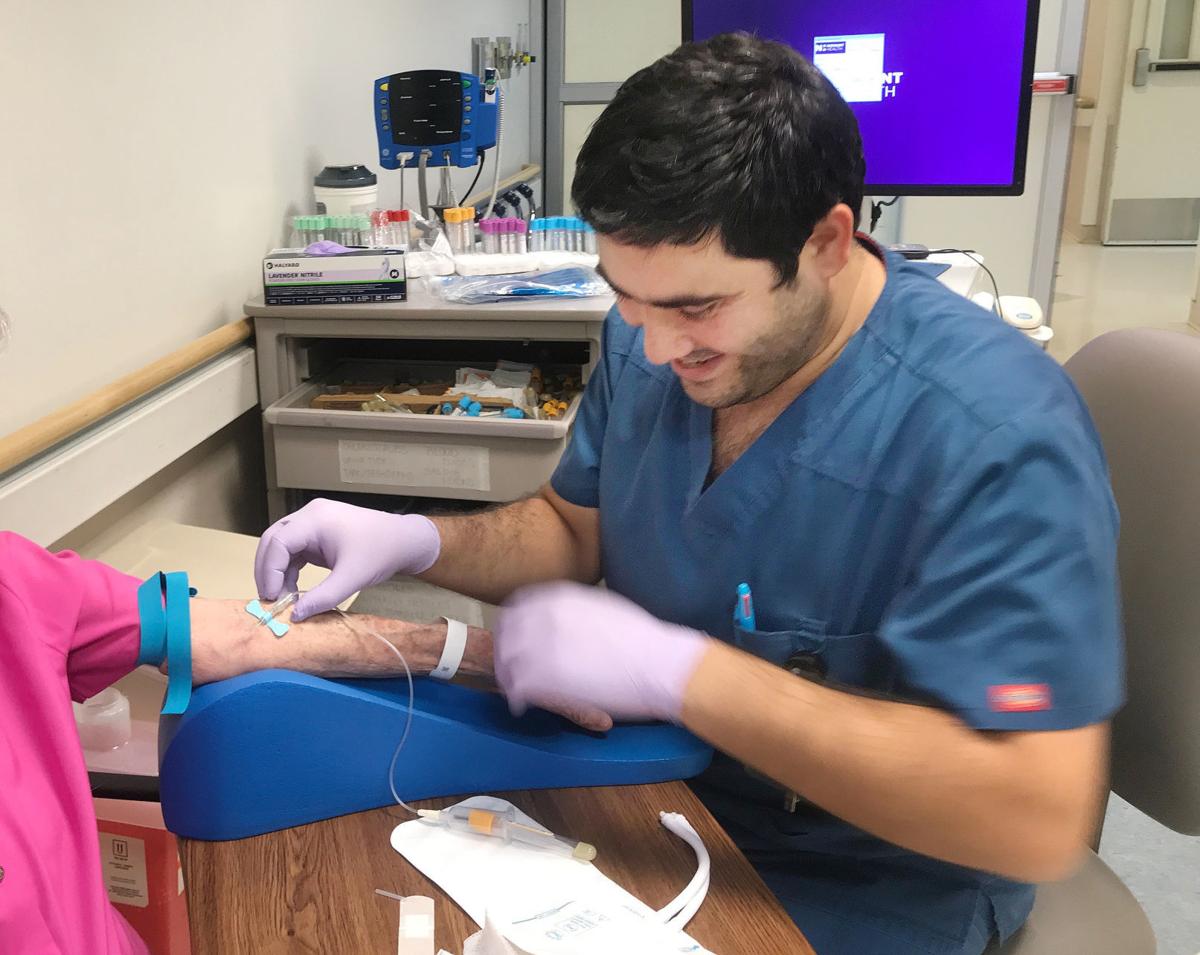 Ahmad Javed Momand, who was an anesthesiologist in Afghanistan, takes a patient’s blood at one of his two jobs as a phlebotomist. Momand, who lives in Manassas, has faced barriers to pursuing his medical license in Virginia. 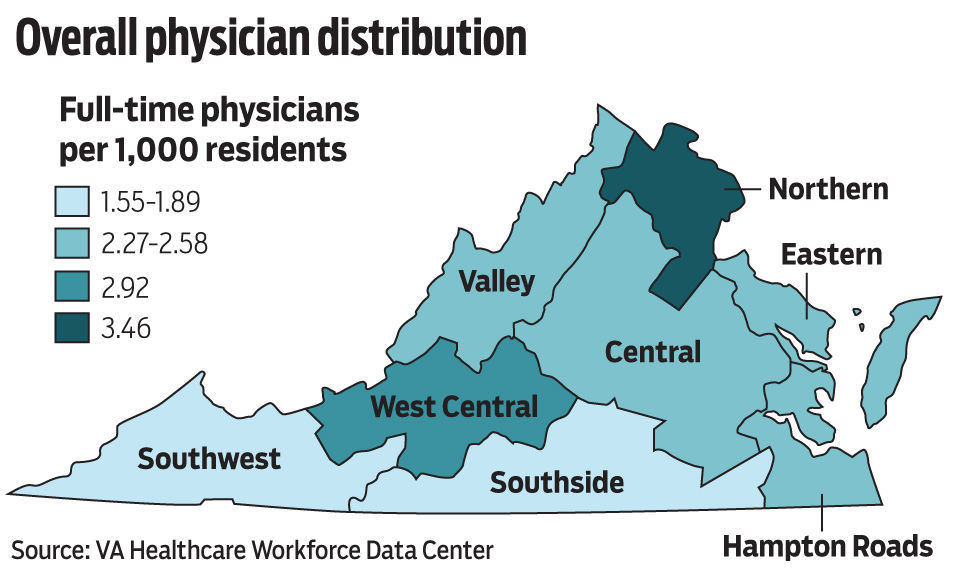 In his native Afghanistan, Ahmad Javed Momand held the most respected position in society: physician.

As a boy, his mother and eight siblings encouraged him to pursue the career, and at 11, he made up his mind that he would.

He was first in his class in high school and went on to complete seven years of medical school and three years of residency to become an anesthesiologist. He worked in a hospital in Kabul, the nation’s capital, where he served the poorest of the poor and treated hundreds of war victims with missing limbs, severe burns and extreme bleeding. Momand liked being able to comfort his patients and help relieve their pain.

But, after moving to Virginia on a Special Immigrant Visa he earned for his family by helping the U.S. Army to train the Afghan National Army’s medical personnel — making him a target for the Taliban — Momand found that his professional experience no longer counted.

It would take him about eight years to qualify for a license in his expertise — four years of studying and four years of residency — all time he couldn’t spare because he’s providing for a family of four.

Instead, he took a 10-week course to become a phlebotomist, a person who takes blood, and now works two jobs, earning $16.58 an hour. It’s barely enough to cover his rent in Manassas, he said.

State officials don’t know how many people like Momand — foreign-trained physicians facing barriers to gain a license — currently live in Virginia, but a new state work group convened at the request of Del. Kathy Tran, D-Fairfax, and Del. Bobby Orrock, R-Caroline, has been tasked with finding out. The group is also charged with assessing options for helping them overcome barriers and considering how they might be used to address health professional shortages in underserved parts of the state.

The Office of Newcomer Services with the Department of Social Services has identified 63 medical professionals — not all physicians — who came to Virginia as refugees or seeking asylum while fleeing danger in their home countries in the past three years, but the number captures only a portion of foreign-trained physicians.

At the same time, many counties in Virginia, particularly in Southwest, Southside and rural areas, are facing health care shortages.

While Northern Virginia has about 3.5 full-time physicians per 1,000 residents, Southwest and Southside have fewer than 2 for every 1,000 residents, and the rest of the state falls somewhere in between, according to the Virginia Healthcare Workforce Data Center.

Tran, whose family came to the U.S. as refugees from Vietnam when she was an infant, saw an opportunity to seek solutions to two problems facing Virginia residents when she requested that the Virginia Department of Health Professions look into options.

“The commonwealth is facing a shortage of physicians in our rural and underserved communities. It is critical that we explore all possibilities to help ensure Virginians have access to high quality, affordable health care,” Tran said in a statement. “At the same time, we have immigrants currently living in Virginia who are trained physicians in their home countries, but are not licensed to practice here.”

The challenges that Momand has faced also hit home for Tran because her father, who was a dentist in Vietnam, was unable to obtain a license to practice in the U.S. for many years, she said.

“This is an issue that my father and other internationally trained health care workers and professionals face,” Tran said. “Many end up in lower-wage jobs that do not reflect their full potential, affecting their abilities to support their families and contribute to the economy.”

There are three pathways for foreign-trained physicians to become licensed to practice in Virginia: They can obtain a certification from the Educational Commission for Foreign Medical Graduates, which certifies readiness to enter American residency or fellowship programs, pass the U.S. Medical Licensing Examination and complete one year of graduate medical education in the U.S.; they can go through the Licensure by Endorsement process, which allows them to be licensed in Virginia if they have been licensed for at least five years in another U.S. jurisdiction; or they can apply for a University Limited License, which allows a physician trained abroad to join a medical school faculty.

Nearly a quarter of practicing physicians in Virginia are foreign-trained, coming from over 130 countries and graduating from more than 700 medical schools, according to a report for the state work group compiled by the Virginia Department of Health Professions.

Of those who went to medical school abroad, about 21%, or 1,068, were U.S. citizens when they entered medical school. The greatest percentage, 24%, were Indian citizens, and the third-largest group, accounting for 8%, were Pakistani citizens.

But for many refugees and immigrants, particularly those who did not plan to leave their native countries, meeting the requirements for medical licensure can be especially challenging.

“When you come to flee, your career is not first on your mind,” said Michelle LaRue, Virginia director of the Court Appointed Special Advocate program and a member of the work group. LaRue’s family left Guatemala unexpectedly because her father’s job as a human rights attorney jeopardized their safety.

At a meeting on Tuesday, LaRue urged the other members of the state work group to remember that those in the U.S. because they were fleeing danger in their native countries face more barriers than those who come on visas granted for educational and occupational reasons.

For Momand, finding the time to study for the license exam while working two jobs and raising two young children has proven one of the greatest barriers. His wife is attending community college to become an accountant and works at a furniture store on the weekends. Although he has little spare time, Momand manages to squeeze in four to six hours of studying each day.

The cost also creates a major burden. Most residencies require clinical experience, which is often unpaid, and it costs more than $3,000 to take the license exam.

When Momand realized how difficult it would be to become licensed as an anesthesiologist again, he looked into applying for a two-year nurse anesthetist program, but found he’d need to have a bachelor in nursing degree.

So, for now, while he studies and considers his options, Momand is trying to make the most of his work as a phlebotomist. He enjoys talking with his patients, who, he says, often compliment him on his technique.

And he’s grateful for the opportunity to live in the U.S. He waited four years in Afghanistan for his visa and was ecstatic when he finally arrived in September 2017. It was as if he had died and gone to heaven, he said. In the U.S., he had hot and cold water, consistent electricity, access to a library and fast internet connection. Even the weather was amazing.

But he can’t help but feel the loss of a career he loved and the stress that comes with struggling to make ends meet.

While working in the emergency room, Momand often sees low-income people come in for treatment. Many times, they have traveled from a rural area to get the care they need.

“Some of them are lonely, very sick and they say they are poor and that they need help,” Momand said. “And, when they see me, they say I am so different than others. So many times, I was [told] I was an angel. But I am not. But I am from a very poor country. I know how [it is when] others are in need and you can help. So I do all I can, and that is how I stand out among other workers.”

Momand believes that if he and other international medical professionals were given the help they need to become licensed to practice in Virginia, it would help improve the quality of health care in the state while allowing him and other qualified physicians to have more fulfilling careers.

The Virginia Department of Health Professions work group is set to provide recommendations to the House Committee on Health, Welfare and Institutions by Oct. 1.

Ahmad Javed Momand, who was an anesthesiologist in Afghanistan, takes a patient’s blood at one of his two jobs as a phlebotomist. Momand, who lives in Manassas, has faced barriers to pursuing his medical license in Virginia.