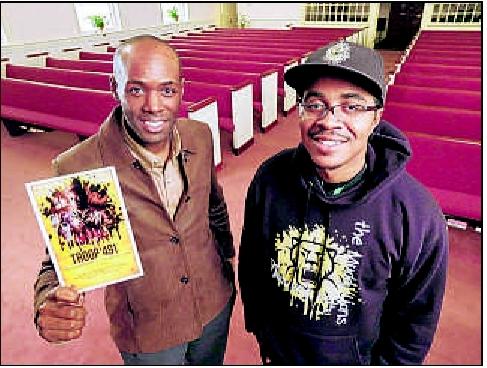 Patrick Ricks (right), director of "Troop 491: The Adventures of the Muddy Lions," was a Boy Scout as a child. Rich Bell was an associate producer of the film.

For Richmond filmmaker Patrick Ricks, the cable television debut of his feature film last week was uplifting, to say the least.

"Troop 491: The Adventures of the Muddy Lions" premiered Friday on UP - short for Uplifting Entertainment - a cable network originally known as the Gospel Music Channel.

The national exposure comes after a yearlong push that began last May during the film's premiere at the Byrd Theater.

Ricks, who goes by the name Praheme, said he's not allowed to disclose details of the deal with UP, which is available in 61 million households. For the next couple of years, UP will air a slightly sanitized version of "Muddy Lions," with some PG-level profanity and grit cut for the sensibilities of the UP audience.

Ricks is OK with that.

"It gives us the opportunity to showcase the movie to millions of people at one time," he said in an interview at an Arts District coffeehouse.

The movie, his first feature film, was co-produced by actor and director Tim Reid. Set in Richmond, it's about a mother's desperate attempt to keep her middle-school son out of trouble by signing him up for the Boy Scouts. Trouble nonetheless finds the youth, who must choose between the Scouts'

code and the code of the streets.

It's a contemporary take on Scouting with an urban spin. If Boy Scouts of America is intent on growing its ranks of minorities, "Muddy Lions" is a logical update of Walt Disney's paean to Scouting, the 1966 film "Follow Me, Boys!", which starred Fred MacMurray, Vera Miles, Lillian Gish and a young Kurt Russell.

If it's looking for ambassadors to succeed Macmurray and Russell, the Boy Scouts could do far worse than Ricks, a member of the original Troop 491 at Providence Park Baptist Church in Richmond's North Side.

"Scouting is part of my DNA. My brother's an Eagle Scout. My cousin's an Eagle Scout. Unfortunately, I didn't finish it, but I think I started when I was about 7 years old," he said. "You say that Scout Law every single meeting, over and over and over, and next thing you know, it starts to be second nature."

He hopes to screen the film in as many as 25 major cities, not only to promote the movie but to sell scouting. "I just realize it's a process, and I'm taking it slow and understanding things may not happen on my timeline."

The process got a boost after Reid arranged in October for the film to screen at Bow Tie Criterion Cinemas at Movieland at Boulevard Square.

"Really, when they gave us the one week, we were happy with that," Ricks recalled. But the film sustained enough of a following for a five-week run. "From that point, it was like, 'OK, how can we try to get into some other theaters?'"

He began charging license fees for churches and other organizations to screen his film, with him there for Q&A sessions, at such venues as the Anacostia Arts Center in Washington, the Henrico Theater in Highland Springs and the Byrd Theater. Word of mouth and online trailers and viewings took it from there.

A breakthrough occurred in late February when the film was shown at the Houston Museum of African American Culture, where it was seen by members of the Sam Houston Area Council of the Boy Scouts of America, one of the nation's largest. The council brought it to the attention of national Scout headquarters.

Following more local screenings, Reid arranged a viewing in March at the British Film Institute in London. A trip to the Arizona International Film Festival followed in April before Reid set up the UP TV deal.

Ricks' first task is repaying his father, Joseph Earl Ricks, for his investment in the film, which Patrick views as an homage to his mother, Shirley Mae Ricks. His mother, a retired state employee who'd raised money for Troop 491, died in a 2009 car crash as she and her husband headed to visit their son in Tallahassee, Fla.

Eventually, he intends for 10 percent of the film's profits to go toward a scholarship fund, with the first recipients being the 10 young actors in the film.

Ricks has drawn from Reid's four decades of experience in the entertainment industry. "The amount of support and the credibility that the movie gained with his association, that can't be minimized."

His relationship with Reid and his actor wife, Daphne Maxwell Reid, dates back to research Ricks did for a Richmond Community High thesis on the underrepresentation of blacks on prime time TV. She urged him to learn his craft and "just kind of gave me the foundation for my career."

He went on to study film production as an undergraduate at Howard University and earned his master's from Florida State University. Knowing that Ricks wanted to show a different side of the black experience, a friend suggested a film on their childhood as Scouts.

"Truth be told, when I wrote this script, all those kids' characters were black. They were all originally black characters," he said. After prodding from others, he diversified his cast to include a white, a Hispanic and an African immigrant in the Muddy Lions troop.

He calls that decision fortuitous. If he needed confirmation of the film's universal appeal, it came in the form of an inquiry from Utah.

"The Scouts are loving it, period, because it's selling their message to a broader audience, and it just happens to have some black people in it," he said.

He has been in communication with the Boy Scouts of America national office in Irving, Texas, and said the organization is interested in selling his film in Scout stores. He's in the process of producing DVDs to sell on his own or directly to the Scouts, with the hopes of someday hooking up with a large distributor such as Wal-Mart.

He envisions "Muddy Lions" as a franchise, with lunch boxes, a book and a TV cartoon that follows troop members on their path to Eagle Scout.

"To be completely honest, this has just been an awesome experience for me. This is my first movie. I'm looking at this as the long game."

And he's clearly living by the Scout motto: "Be prepared."

In one of the most significant shifts of the pandemic, federal officials announced Thursday that fully vaccinated people no longer need to wea…

Patrick Ricks (right), director of "Troop 491: The Adventures of the Muddy Lions," was a Boy Scout as a child. Rich Bell was an associate producer of the film.