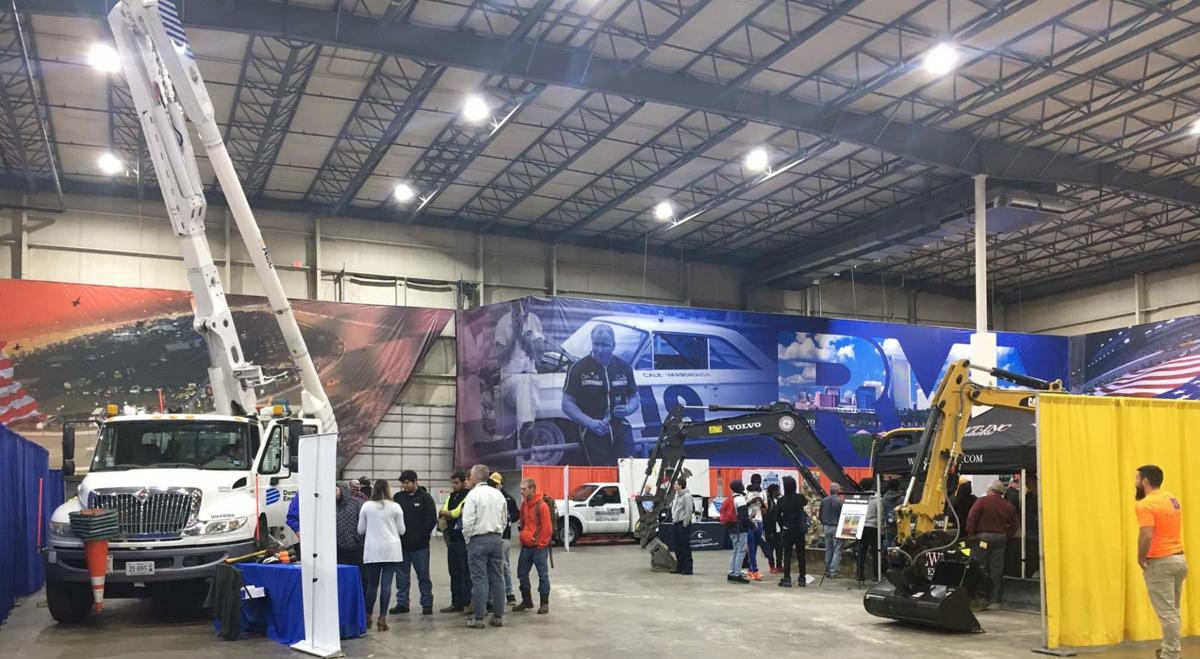 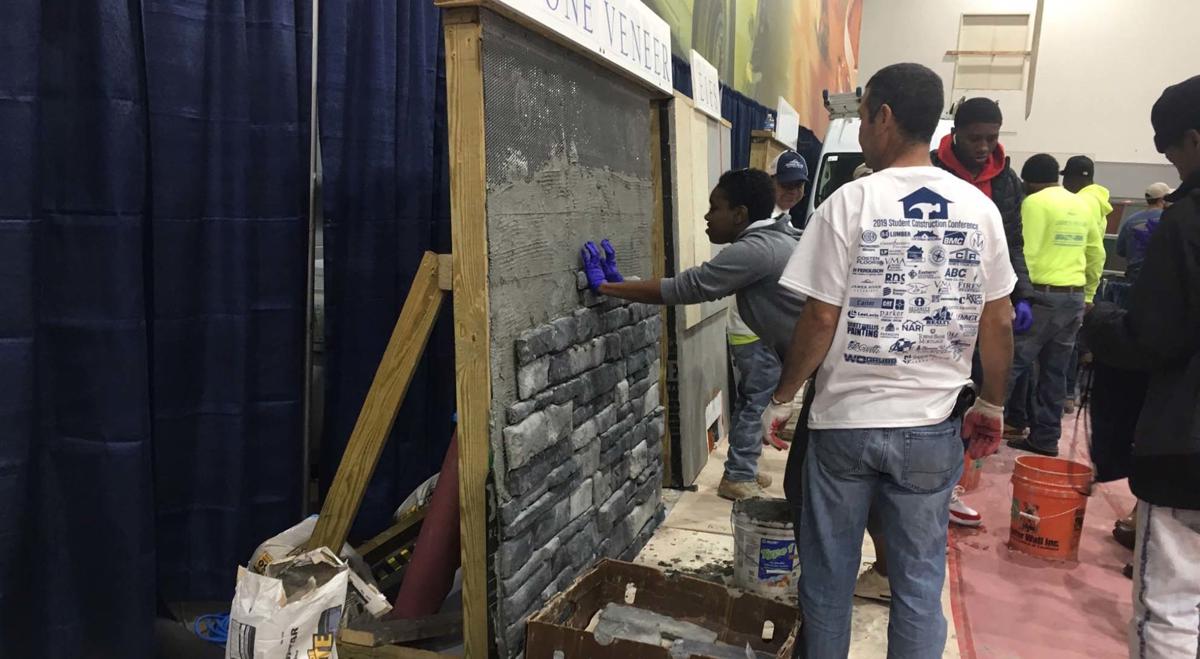 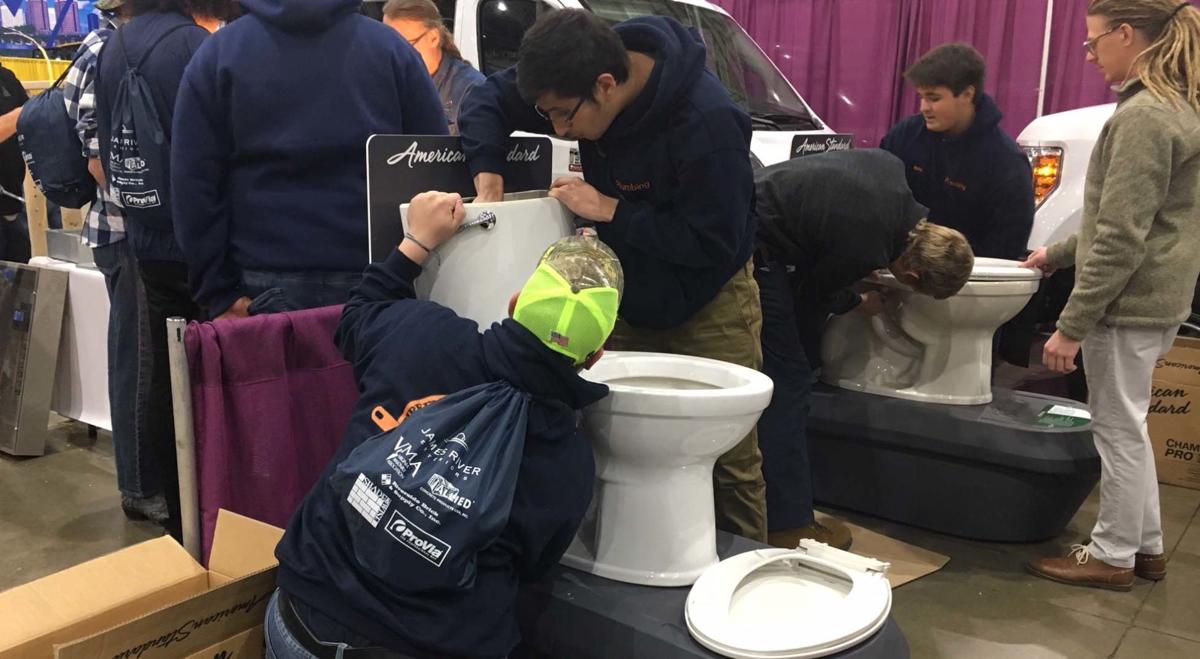 A festive, field trip-like air filled the Richmond International Raceway exhibition hall in November 2019 as students from across the Richmond area came to learn the benefits of a career in the construction industry. Students sported pink or white plastic hard hats as they toured demonstrations representing different industry trades at the second annual Student Construction Conference, hosted by the Home Builders Association of Richmond (HBAR).

The conference was initially conceived as a way to face the shortage of skilled labor that has plagued the industry nationwide, according to former HBAR President Scott Sleeme. This lack is the “number one threat to the residential construction industry and its ability to keep up with new construction demand,” stated HBAR’s website.

More than 35 companies participated in the conference, representing such diverse trades as plumbing, painting, masonry, electrical, and equipment technology. And this was not your average career fair – instead of just quiet booths where students could collect brochures, the hall was filled with the sounds of hammering, drilling, and even beeping horns from the large trucks parked in the room. Volunteers led groups from the more than 800 students representing eight schools in the region around the room to various hands-on demonstrations.

Carter Machinery displayed a skid steer and a mini excavator. The company also had an engine on which students could make valve adjustments. Eddie Pickering, human resources generalist for Carter, was on hand to tell students about the firm’s 15-month apprenticeship program, which leads to a certification as a construction equipment technician.

“If you’re selected, you actually come on board as a full-time employee, so you get full-time benefits and compensation. That really starts your journey with us into a long-term career,” said Pickering.

Plenty of laughter rang out from the Dominion Energy demonstration, as students tried to put together a nut and bolt while wearing the unwieldy gloves that linemen use in their work. Staffing Specialist Hilary Throckmorton said many students don’t realize how hard it is with the different-sized gloves. “Some of the students say you can’t even make a fist with them on, but this is what the line workers use in their daily tasks. It really shows them what it’s like to get in there and do the work,” she said.

Now is the best time for students to get into the industry, according to James River Exteriors founder Mike Chaney. “Unfortunately, in a room of most of my masons, which is 50-something people, I’m one of the younger guys in the room,” he joked. Many older workers are retiring, so if students want to join the industry now, “in a fairly short window, they’ll be in charge.” Last year he signed five students straight out of the Henrico Career & Technical Education (CTE) program.

Lauren Gray, branch manager for Ferguson Enterprises says that retirement is affecting the plumbing industry too. Ferguson employees were showing how to install toilets and adjust water heater elements. Gray said that Ferguson, which is a plumbing supplier, is looking to hire warehouse workers and counter associates. “But I’ve brought along the cards of some of our top plumbers who would be looking for helpers,” she said.

One major factor that may help attract students to the industry is the lack of student loan debt needed to enter the workforce, which they likely would have if they went to college after high school. “Earnings potential used to be the argument for a college degree. The national average for student loan debt is roughly $30,000 per graduate, and rising. That’s a hefty loan payment to start out in life with at an entry-level position and a liberal arts degree,” said Sleeme.

Marketing the earning potential of a career in construction may be the key to attracting new workers in the future.