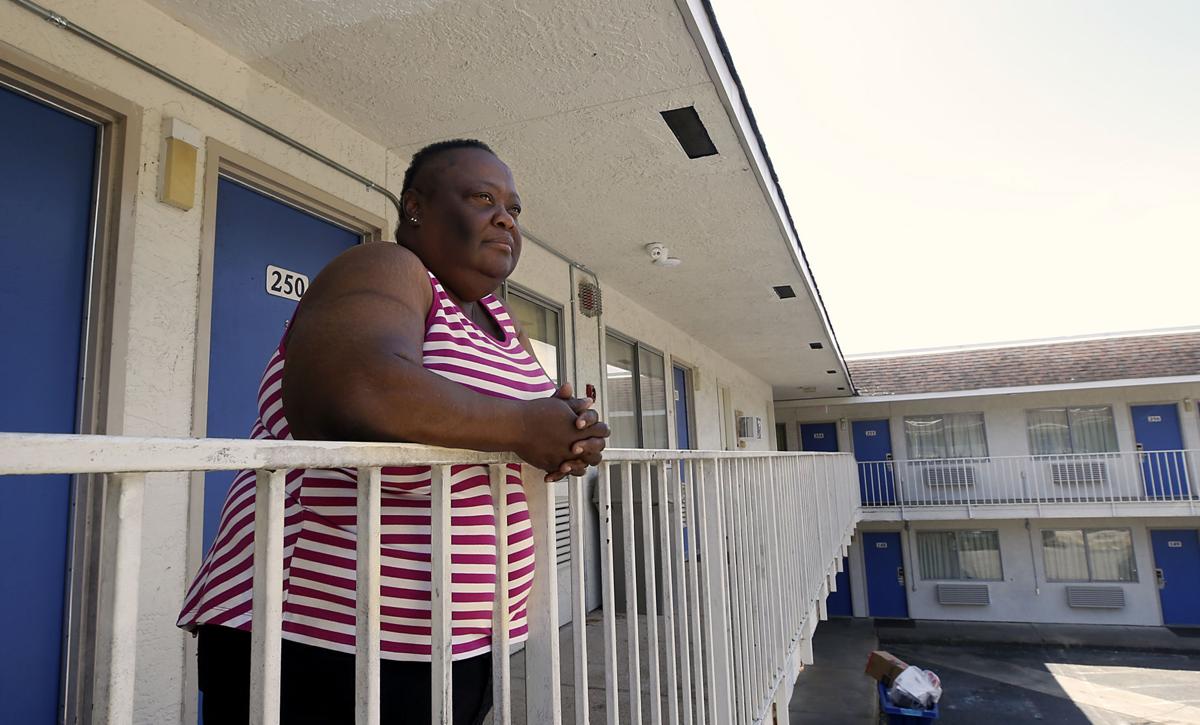 Garlena Williams-Pierce (above), stands in front of her room at the Motel 6 near Richmond International Airport. 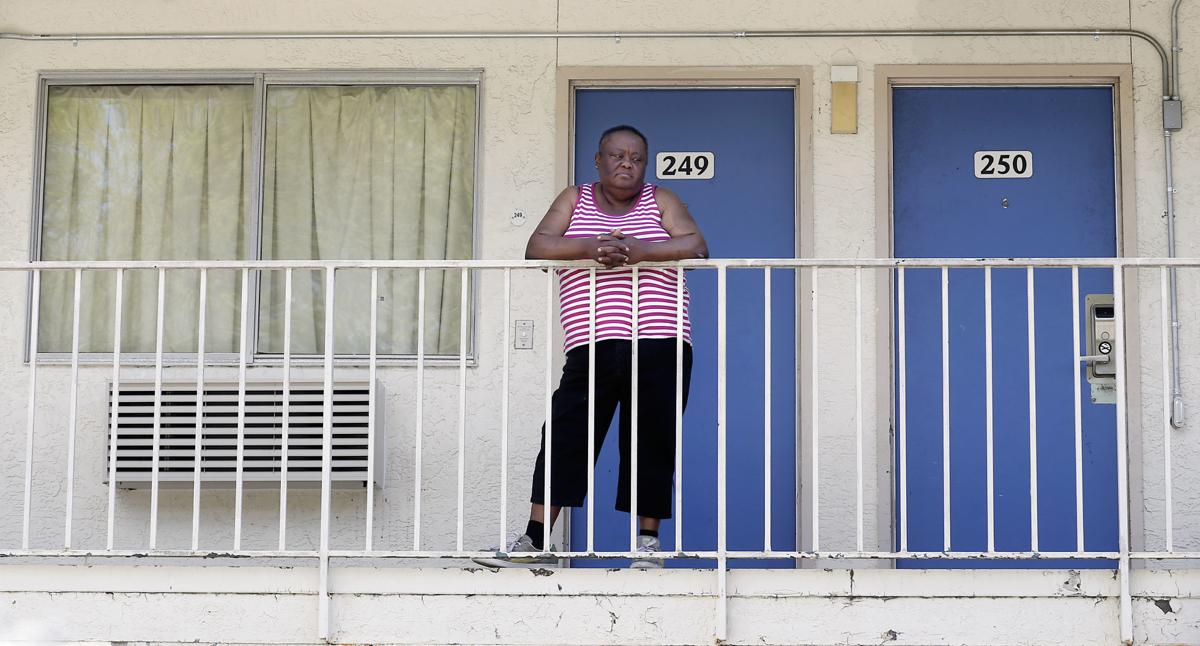 Garlena Williams-Pierce, outside her Motel 6 room in Sandston, received an outpouring of support after an April news report on her plight. 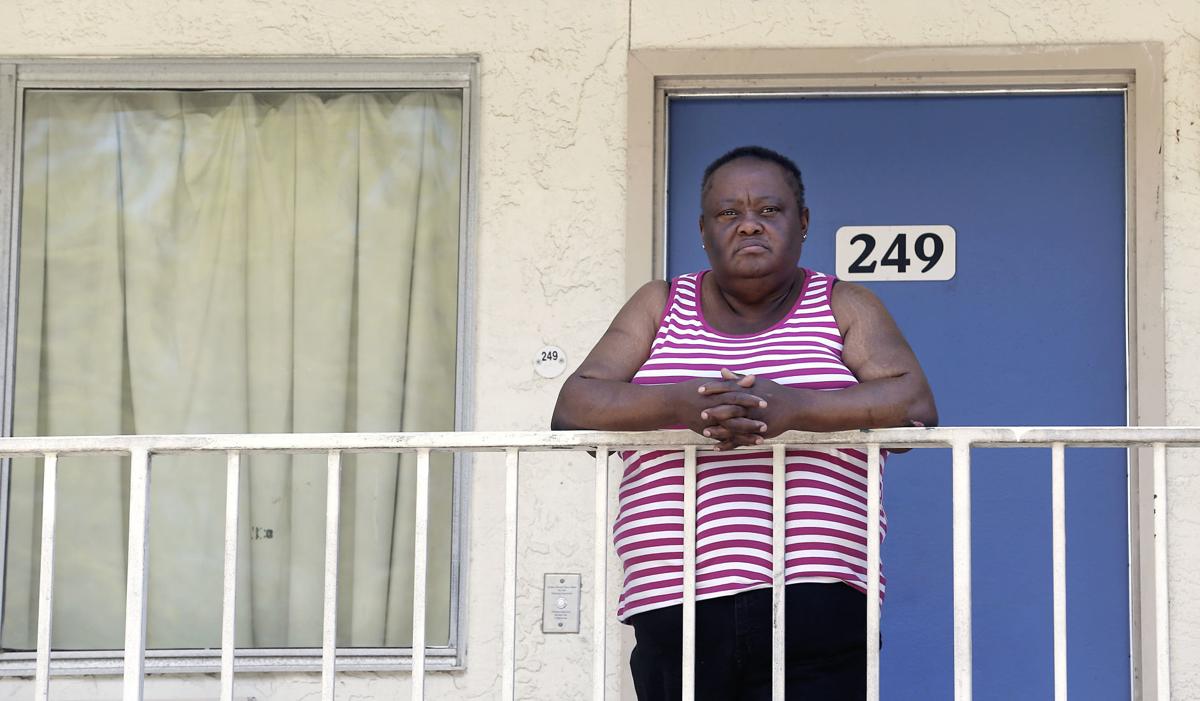 Garlena Williams-Pierce, in front of her Motel 6 room near Richmond International Airport, says she was saving money to move with her 15-year-old son, Jay, into a house before the COVID-19 crisis interrupted her plans.

The room at Motel 6 is the only thing keeping Garlena Williams-Pierce and her teenage son off the streets, and they’re at risk of losing it.

Each week since August, the 53-year-old widow has paid the motel’s management $302.64, saving what she could as a cashier at Wendy’s for an apartment. She picked one in eastern Henrico County, in a school zone she believes would give her son Jay, 15, a chance at something she never had: a college education and a well-paying job.

“I don’t want him to have to struggle,” she said.

In March, Wendy’s cut her hours because of the COVID-19 pandemic. The biweekly paycheck the family relies on dropped from $682 to $273. Her dream of a fresh start in a two-bedroom home was in jeopardy.

The day before her motel bill was due this week, her bank account was empty. She called churches, nonprofits, friends and her pastor — 60 people or organizations in total, she said — asking for any help they could offer. Few returned calls, and her anxiety grew. If she couldn’t come up with the money, would management give her extra time? What if they didn’t?

“My biggest fear is that I will be put outside, that I will lose my child because I cannot provide a roof for him,” she said before trailing off in tears.

Hotels and motels are a last resort for families experiencing homelessness. While the region counted 549 people as unsheltered in January under a definition set by the U.S. Department of Housing and Urban Development, hundreds of others languish in motels throughout the region.

Warnings the novel coronavirus could devastate the region’s most vulnerable residents prompted officials to move people off the streets and into hotel rooms. Now, advocates fear scores of families teetering on the brink before the crisis will lose those rooms when cash runs out.

Nonprofits are bracing for a deluge of people they don’t have the money to help and the region’s strapped shelter system cannot accommodate.

“That’s a very real possibility,” said Beth Vann-Turnbull, executive director of Housing Families First, a nonprofit that works with homeless families. “It’s not safe to have people out. It’s always bad, but now it is truly, not only those families, but the whole community’s health and safety at risk.”

A diabetic who relies on a CPAP machine to breathe when she sleeps, Williams-Pierce could face serious complications if she contracts the disease.

“I don’t want to get sick. I don’t want my child to get sick. From the way they’re describing this virus, it’s killing so many people. If my child ends up in the hospital and I can’t be there with him, that would really mess me up.”

The Richmond region has received $172,000 from the state for hotel vouchers and support for the homeless during the pandemic, which is going to self-isolation rooms for unsheltered people displaying symptoms of the virus and others who are considered high risk.

But the number of people who fit the description is rising daily, said Kelly King Horne, executive director of Homeward, which coordinates services to the homeless throughout the region.

Fearing an outbreak, Richmond teamed with Homeward and other nonprofits last month to move 80 people out of a Shockoe Valley homeless encampment and into hotel rooms at a cost of $36,000 a week, according to figures Homeward provided.

That doesn’t include meals, cleaning supplies and other costs incurred since taking down the tents collectively known as Camp Cathy. After initially booking two-week hotel stays, the nonprofits extended them for most people, unless shelter space or other housing was available, King Horne said.

Nonprofits are soliciting private donations to supplement federal, state and local dollars, but that won’t meet the need for unsheltered people, let alone the hundreds of families who may lose their homes or hotels rooms in the coming weeks, King Horne said.

“We’re preparing to be inundated,” she said. “It will be a flood of people who were living on the edge before.”

The region’s Homeless Crisis Line has logged a rise in calls from people living in motels since the pandemic began. Many have little recourse. If they are unable to pay, management can simply kick them out or change the locks on their room.

However, families like Williams-Pierce’s who have lived at a motel for three consecutive months or longer are protected under Virginia’s Residential Landlord and Tenant Act, even if they do not have a formal lease, said Phil Storey, an attorney with the Virginia Poverty Law Center.

A statewide eviction freeze is in place through April 26. Without a court order, any attempt by a motel’s management to bar a person residing in a room 90 days or more — even if they cannot pay — amounts to an illegal eviction, Storey said.

“Even if [hotel management] knows there’s this 90-day rule, a lot of the tenants aren’t necessarily going to know that. Some law enforcement may not know, either, so they can probably get away with it in most cases,” Storey said.

If a tenant believes they are facing an illegal eviction, they can call police to intervene. If that does not work, they should contact legal aid for help requesting an emergency court hearing on the matter, Storey said.

As many as half of the 120 rooms at the Motel 6 in Sandston where Williams-Pierce lives are occupied by people with nowhere else to go, she and others there estimate.

Their ability to stay hinges on steady paychecks or tips that have suddenly shrunk or vanished amid economic fallout from the pandemic. In the last three weeks, 39,278 people in the Richmond region have filed unemployment claims.

Arun Kadimcherla, part-owner of the Motel 6, said if someone cannot pay, management will give them a few extra days. If they still don’t have what they owe after the grace period, he said management would ask them to leave and, if necessary, call law enforcement to have them removed from the property.

“One or two days, we can take a loss,” Kadimcherla said. “At the end of the day, we still have to be able to pay our bills.”

Williams-Pierce said she had not received threats from management at the Motel 6. Still, she worried what would happen if she came up short.

“I don’t know if they’ll put me out or what,” she said. “They may say they’ll work with you, but you don’t know what’s going to happen from day to day.”

The series of calls she made last week helped temporarily save her room. A church paid for two nights. Her pastor paid for two more.

With schools closed for the remainder of the year, the motel room has doubled as Jay’s classroom. She tries to keep him focused on his studies, while making sure they have what they need to survive: food, soap, toothpaste, toilet paper.

“Her son gives her hope, gives her a reason for living,” said Robert A. Whitehead Sr., pastor at New Zion Baptist Church in Williamsburg, where Williams-Pierce is a member. “She’s willing to sacrifice and do whatever she needs to do in order for him to be successful in school and in life.”

Added stress from the crisis has amplified Williams-Pierce’s anxiety, a condition she has coped with since her husband died during a liver transplant meant to save his life. He was 51.

Beset by grief, she spiraled into a deep depression. Eventually, she decided she needed to start over, and left her job of more than a decade at the College of William & Mary. She moved from Williamsburg to a house in New Kent, but it had mold issues, she said. They packed up again and landed at the Motel 6 on Williamsburg Road across from the Richmond International Airport.

It wasn’t far from the Wendy’s where she worked, and they’d only be there for one or two months, she told herself at the time.

First month’s rent, a security deposit and an application fee for the apartment in the Varina High School zone she wanted costs about $1,700. Lost wages over the last month depleted her savings — about $700 — in a matter of weeks. But she applied for it Friday, praying the federal stimulus money arrives in time to cover what she’ll need.

There’s another other hurdle, too. Until Williams-Pierce settles a delinquent balance with Dominion Energy, she can’t start electricity service at a new address, an impediment to signing a lease. Such obstacles are common and can trap families in motels, said Vann-Turnbull, the executive director of Housing Families First.

Often, families trying to save thousands in move-in costs end up spending down their savings to keep shelter or deal with other emergencies that crop up.

Williams-Pierce paid for what she hopes is their final two weeks at Motel 6 using a $600 Social Security payment the family receives. The money could have gone toward the apartment.

What other choice did she have?

Garlena Williams-Pierce (above), stands in front of her room at the Motel 6 near Richmond International Airport.

Garlena Williams-Pierce, outside her Motel 6 room in Sandston, received an outpouring of support after an April news report on her plight.

Garlena Williams-Pierce, in front of her Motel 6 room near Richmond International Airport, says she was saving money to move with her 15-year-old son, Jay, into a house before the COVID-19 crisis interrupted her plans.