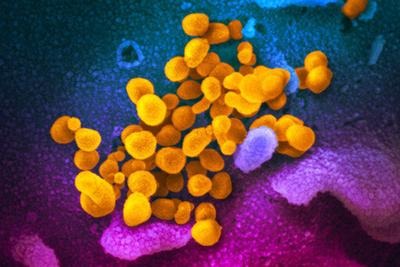 The news escalated at a staggering pace over the past three weeks.

For perspective on the rapid changes to our community, here's a timeline of major announcements and developments in Virginia as the coronavirus pandemic spread across the state.

This list was updated on March 23, and will evolve based on new information in the days ahead.

NOTE: the number of cases reported each day by the Virginia Department of Health are valid as of 5 p.m. the previous day.

- Virginia established an Incident Management Team for the novel coronavirus. The respiratory disease was officially named COVID-19 by the World Health Organization on Feb. 11.

- VDH began posting a count of "patients under investigation" on the agency's coronavirus monitoring webpage.

- With the number of confirmed cases at 62 elsewhere in the U.S., Va. braced for the virus' arrival. Northam administration estimated pandemic preparedness will cost $9.7 million.

- Gov. Northam described the state's COVID-19 preparedness steps in a letter to state employees; as of this week potential cases were tested by Virginia's Division of Consolidated Laboratory Services rather than the CDC.

- 17 people in Virginia had been tested; health officials said the state had no confirmed cases.

- The Pentagon makes the first announcement of a COVID-19 case in Virginia, a Marine stationed at Fort Belvoir and exposed while abroad.

- First case confirmed in the District of Columbia.

- Virginia's second case of coronavirus announced in city of Fairfax, the man was exposed on a Nile River cruise; 44 Virginians had been tested.

- Virginia coronavirus cases up to 5 after people diagnosed in Arlington, Spotsylvania, Fairfax.

- Three new coronavirus cases in Virginia brought the known statewide total to 8, with the first cases for Loudoun County and Virginia Beach.

- Organizers announced they are canceling the Virginia Festival of the Book, set for March 18-22 in Charlottesville.

- Rep. Don Beyer, D-8th, announced self-quarantine after dining with a friend since diagnosed with COVID-19.

- Capital One and Genworth encouraged employees to work remotely.

- Northam declared a state of emergency and ban on state employee travel.

- The ACC and Atlantic 10 suspend play at their basketball tournaments; the NCAA announced it has canceled its tournament.

- Richmond DPU announced it will suspend disconnections of water and wastewater for non-payment.

- Number of known cases statewide rose to 30, according to VDH.

- More spring events announced postponements, including Greek Festival, French Film Festival and RVA Street Art Festival along with the Something in the Water music festival in Virginia Beach.

- Many grocery stores in the Richmond region sold out of toilet paper, hand sanitizer and cleaning products.

- Virginia saw the first death from coronavirus in James City County; the first Chesterfield resident tested positive as the statewide count increased to 41.

- Publix started to close stories earlier in the evening.

- Northam announced a statewide ban on all events over 100 people, called for businesses to engage in social distancing and urged residents to stay home as much as possible.

- More retailers cut back on hours to help with cleaning and restocking, including Walmart, Kroger, Wegmans and Trader Joe's.

- YMCA of Greater Richmond suspended childcare services for the upcoming week, but planned to stay open.

- The Virginia State Capitol and the Pocahontas Building closed to the public for the rest of March beginning at 5 p.m.

- Judicial emergency issued for all district and circuit courts, in effect until April 6.

- Senate Minority Leader Tommy Norment urged Northam to call a special session of the General Assembly to address the economic fallout of the pandemic.

- State Corporation Commission issued a 60-day moratorium on utility disconnections due to nonpayment.

- Statewide coronavirus cases at 67 amid signs of community spread; Richmond area up to 8 cases.

- Northam said state will ban gatherings of 10 or more people, ordered Department of Motor Vehicles to shut down in-person services.

- YMCA of Greater Richmond closed all 16 locations until further notice starting at 4 p.m.

- University of Virginia canceled Final Exercises and all events on Grounds.

- Virginia cases of coronavirus up to 77 people, including four Richmond residents.

- VCU Health and some Richmond-area doctors and dentists prepared for the expected rise in cases by rescheduling non-emergency care.

- In a letter, Lt. Gov. Justin Fairfax asked Northam to call a special session of the General Assembly and implement more extensive closures of schools and businesses.

- VCU postponed May commencement to December and announced it will issue refunds and credits for housing and dining.

- State officials reported 94 cases, 19 hospitalized and 1,923 having been tested; in Fairfax County, another assisted-living community reported a case.

- University of Virginia Health System debuted its own COVID-19 test.

- Republican Party of Virginia postponed state convention scheduled for May 1-2.

- Deadline for paying Virginia income taxes delayed by 30 days from May 1 to June 1.

- The Lynchburg area and the Southside Health District reported their first coronavirus cases.

- YMCA of Greater Richmond announced a partnership with the city to provide emergency childcare for medical workers, starting Monday.

- Coronavirus cases rose to 254 and now appeared in 40 of the state's localities; the death toll rose to seven.

- Northam ordered all K-12 schools closed for the rest of the academic year and stepped up restrictions for businesses.

SUNDAY COVID-19 NEWS: Three more deaths in Virginia as Northam warns that turmoil from COVID-19 will continue for months

Two weeks ago, Lucy Fox thought her father was going to die. 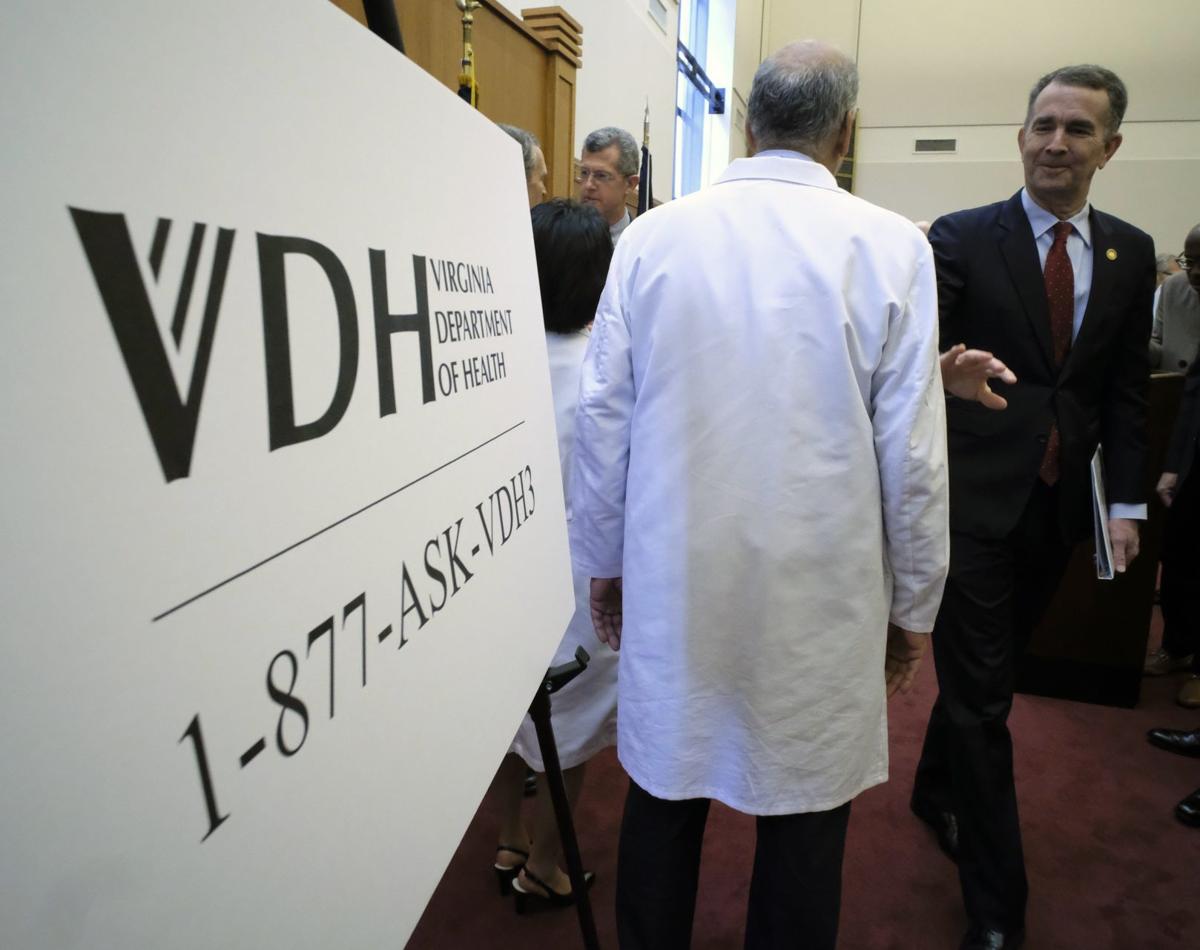 Gov. Ralph Northam, right, walks past a group of medical professionals as he leaves a press conference dealing with state preparations on COVID-19 on Wednesday, March 4, 2020. 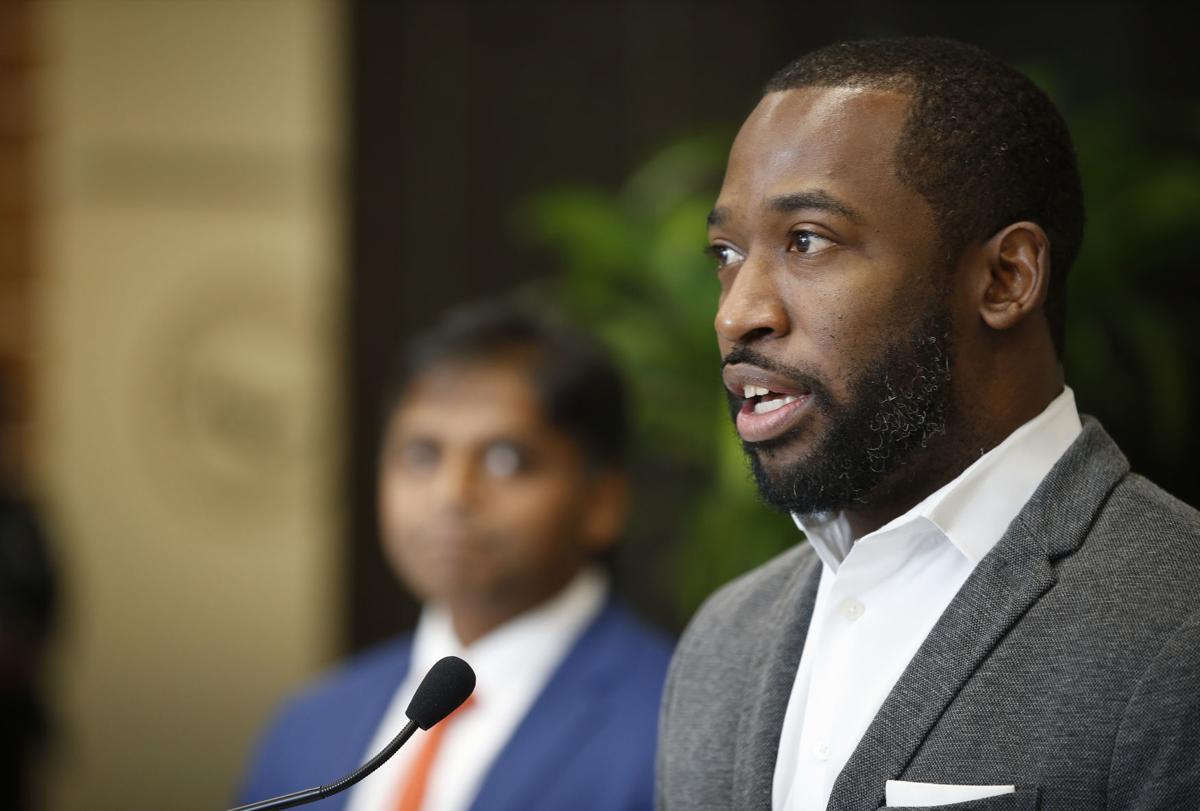 Richmond Mayor Levar Stoney and Dr. Danny Avula (background), director of the Richmond and Henrico Health Departments, held a news conference on the COVID-19 outbreak on Wednesday at City Hall. 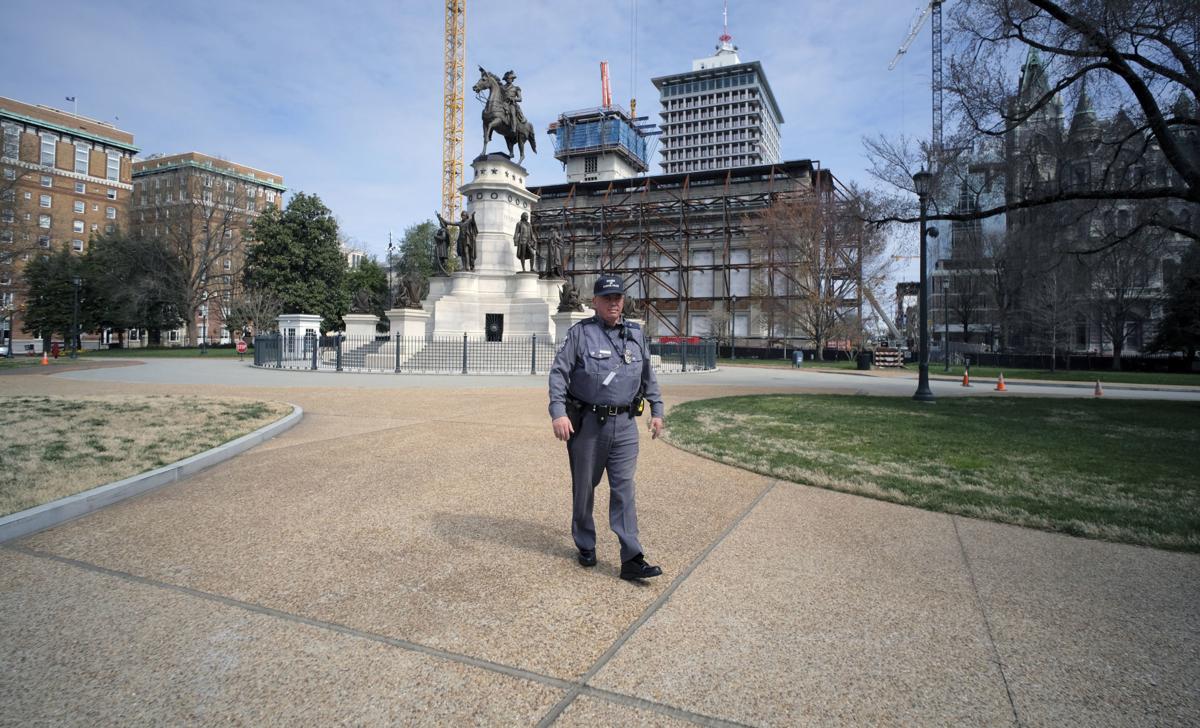 State Capitol Police Officer Woodrow Dowdy, III, walks through an empty Capitol Square in Richmond, VA Monday, March 16, 2020, After 5pm, the State Capitol will be closed to visitors for an initial period of two weeks. 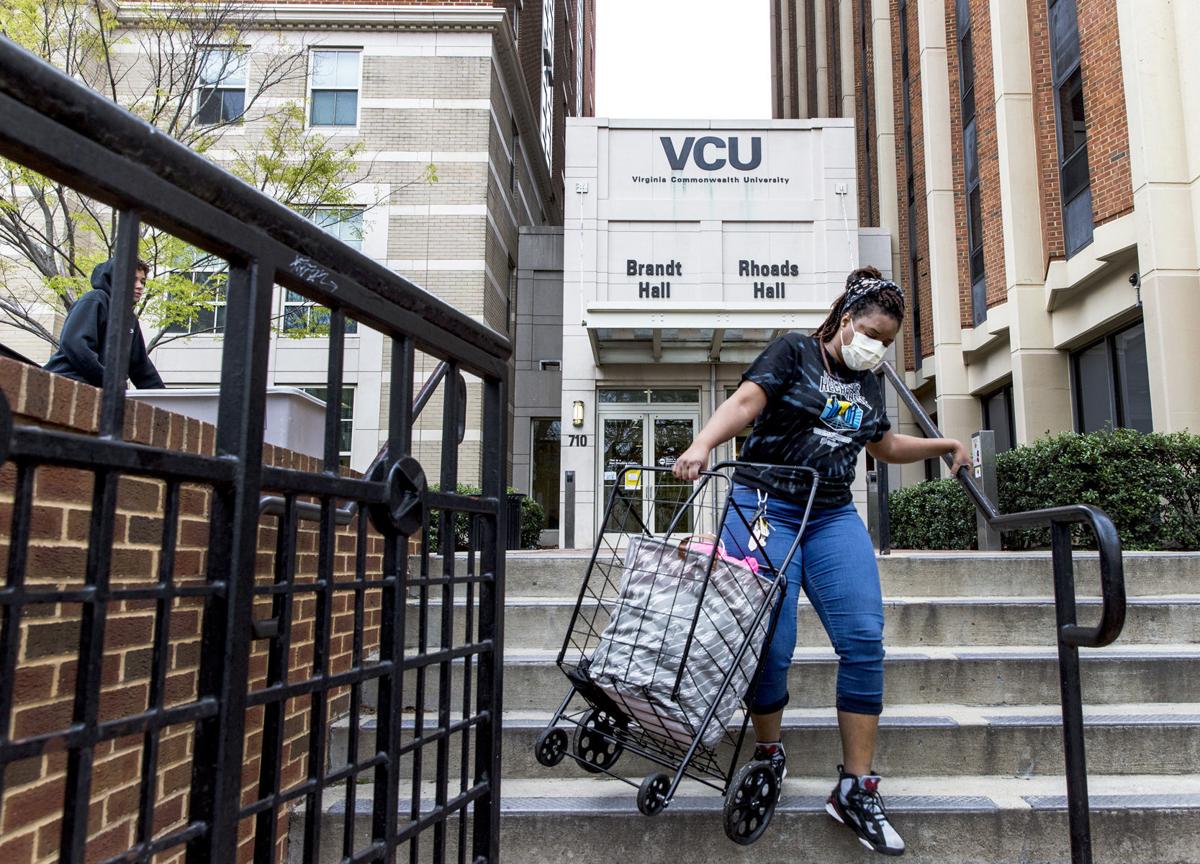 Tiffany Pierce of Petersburg moved some of her daughter’s things out of a residence hall in March as VCU shifted its classes online to help stop the spread of the coronavirus. 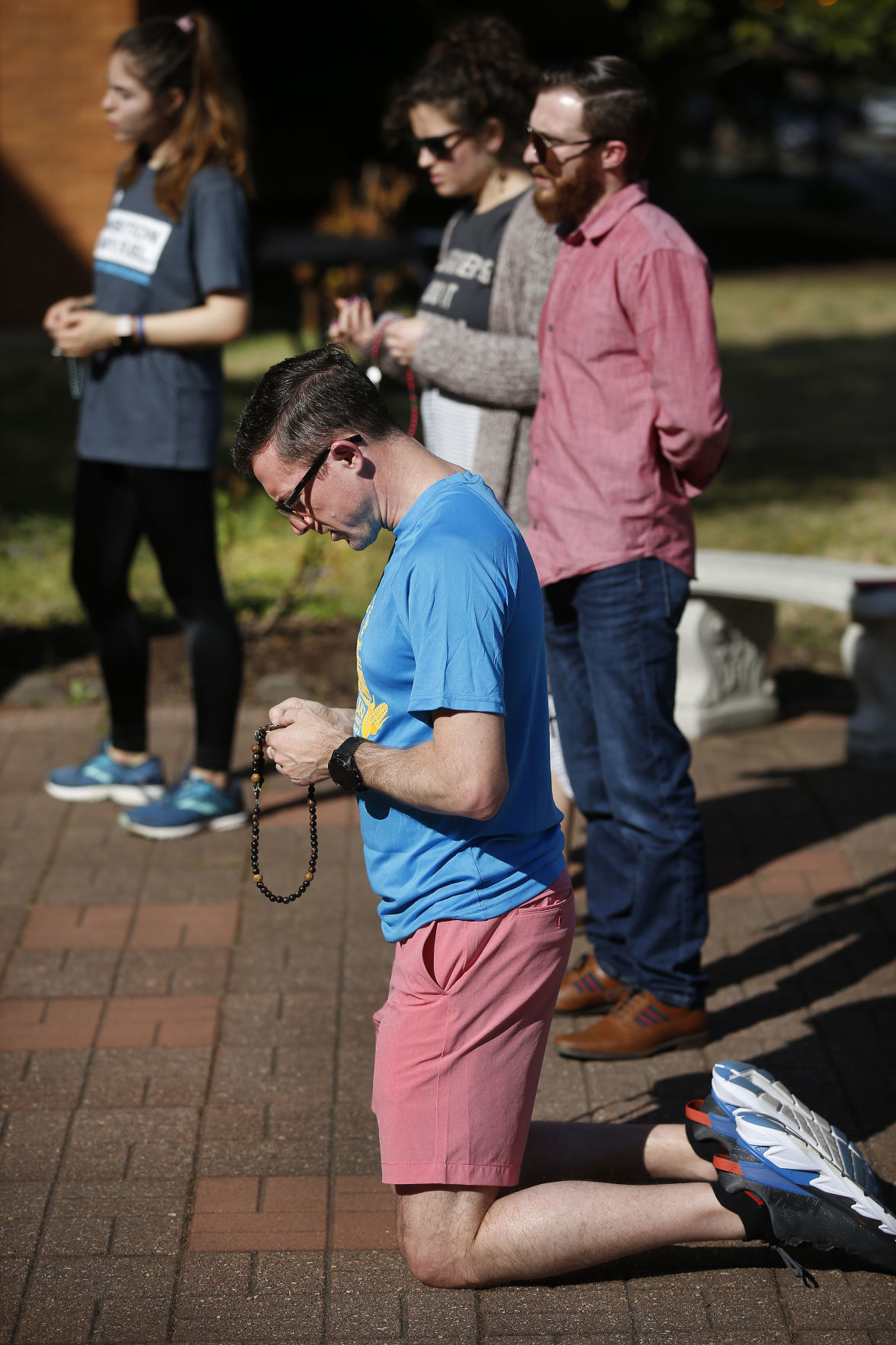 Local Catholics gathered Thursday to pray the rosary in front of the Virgin Mary statue at St. Benedict Catholic Church in Richmond’s Museum District. James Hickman (front) was among those who attended. Pope Francis invited Catholics around the world to join him in praying the rosary on Thursday, on the Feast of St. Joseph, to alleviate suffering linked to the coronavirus. The Rev. John David Ramsey, the church’s pastor, said that even though Mass has been suspended because of the virus, St. Benedict and all other Catholic churches in the diocese are committed to remaining open during daylight hours for individual prayer and reflection. 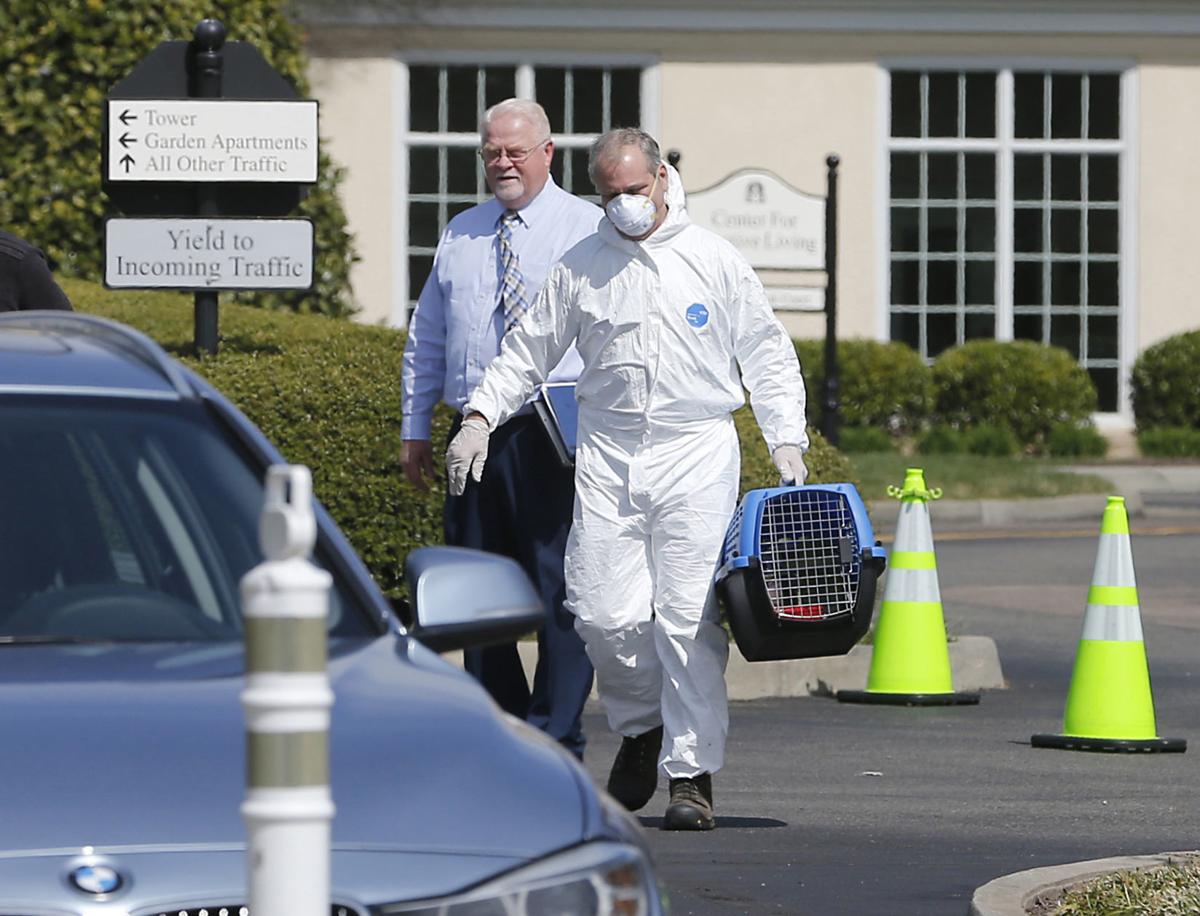 A staff member in protective clothing at Westminster Canterbury Richmond took a resident’s pet to a relative for care on Tuesday. Officials say a resident who has tested positive for the coronavirus appears to be in stable condition. 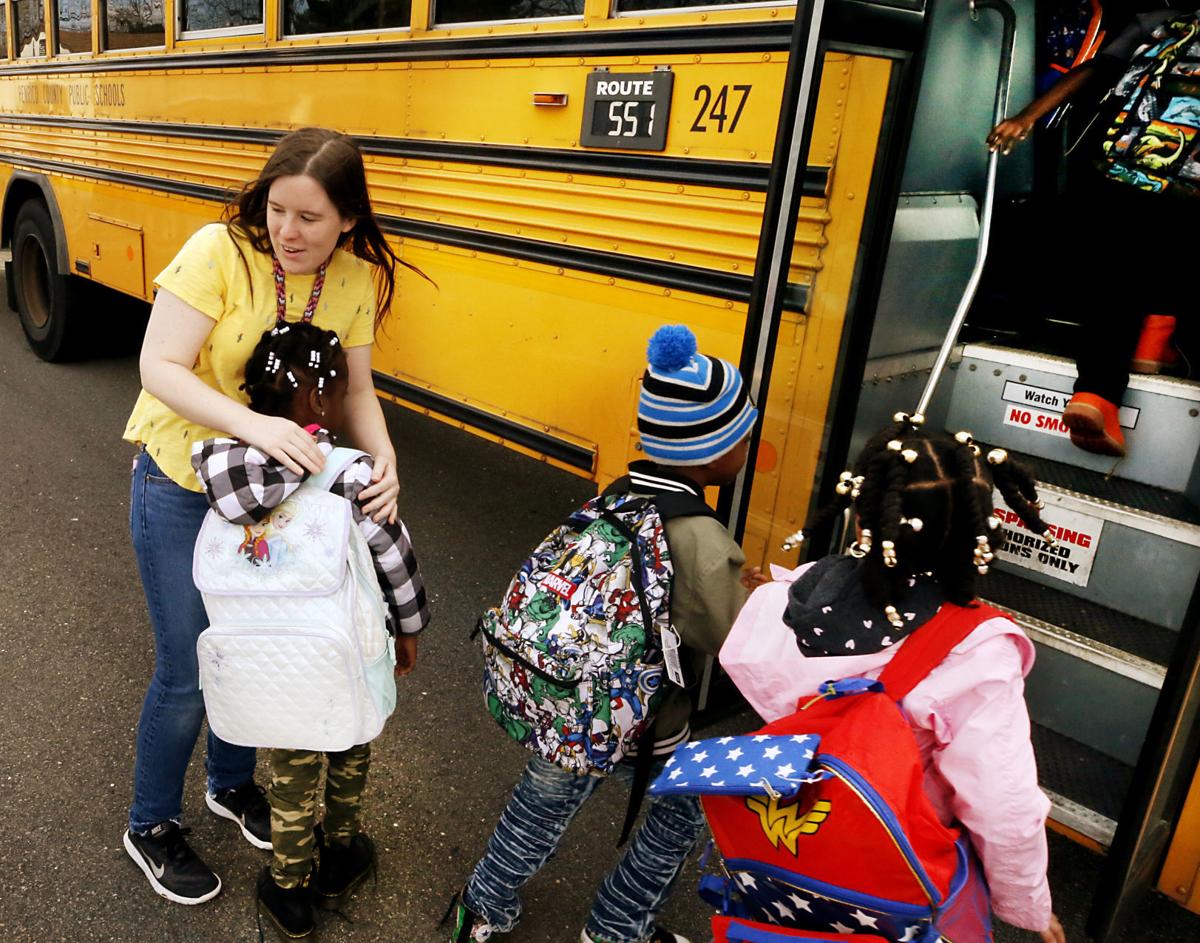 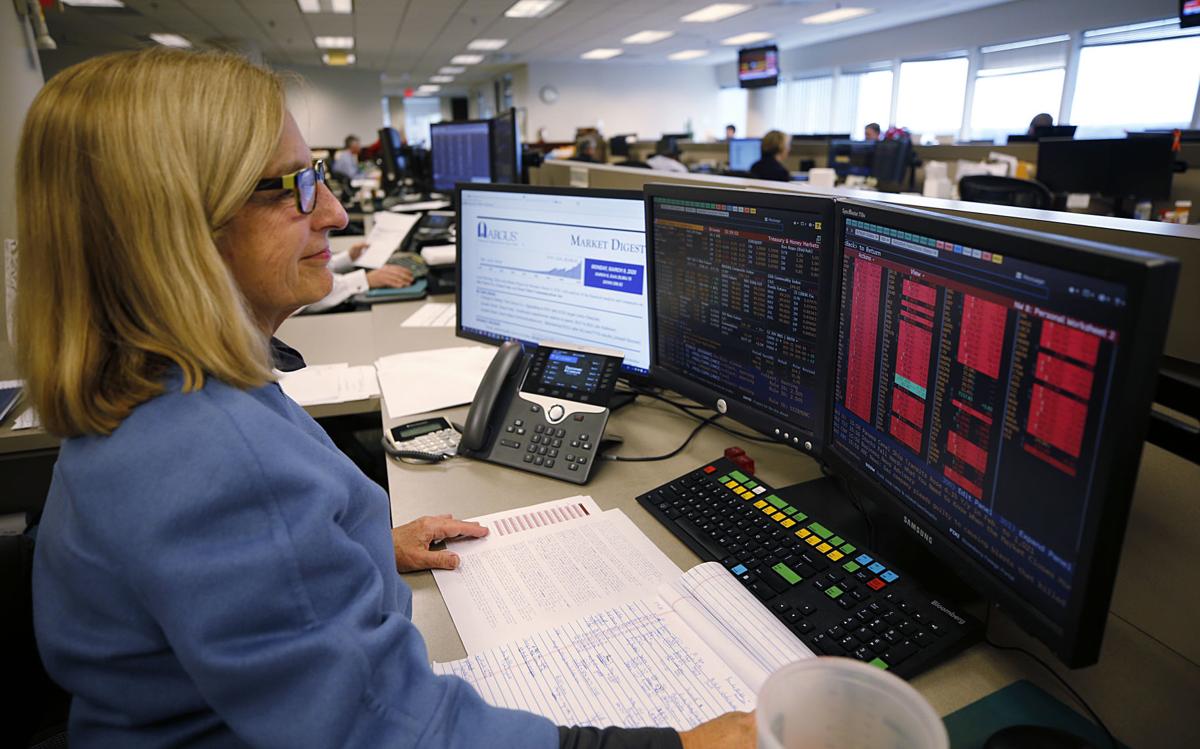 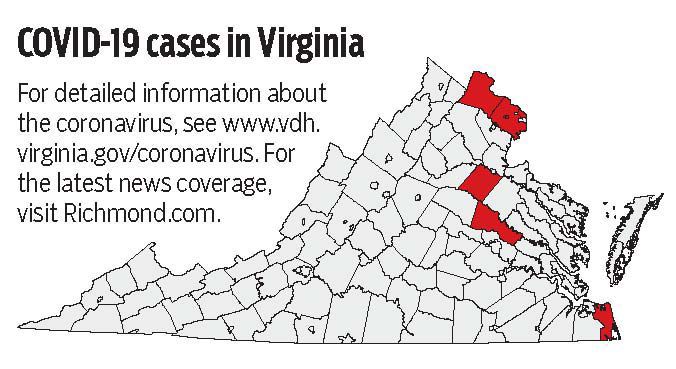 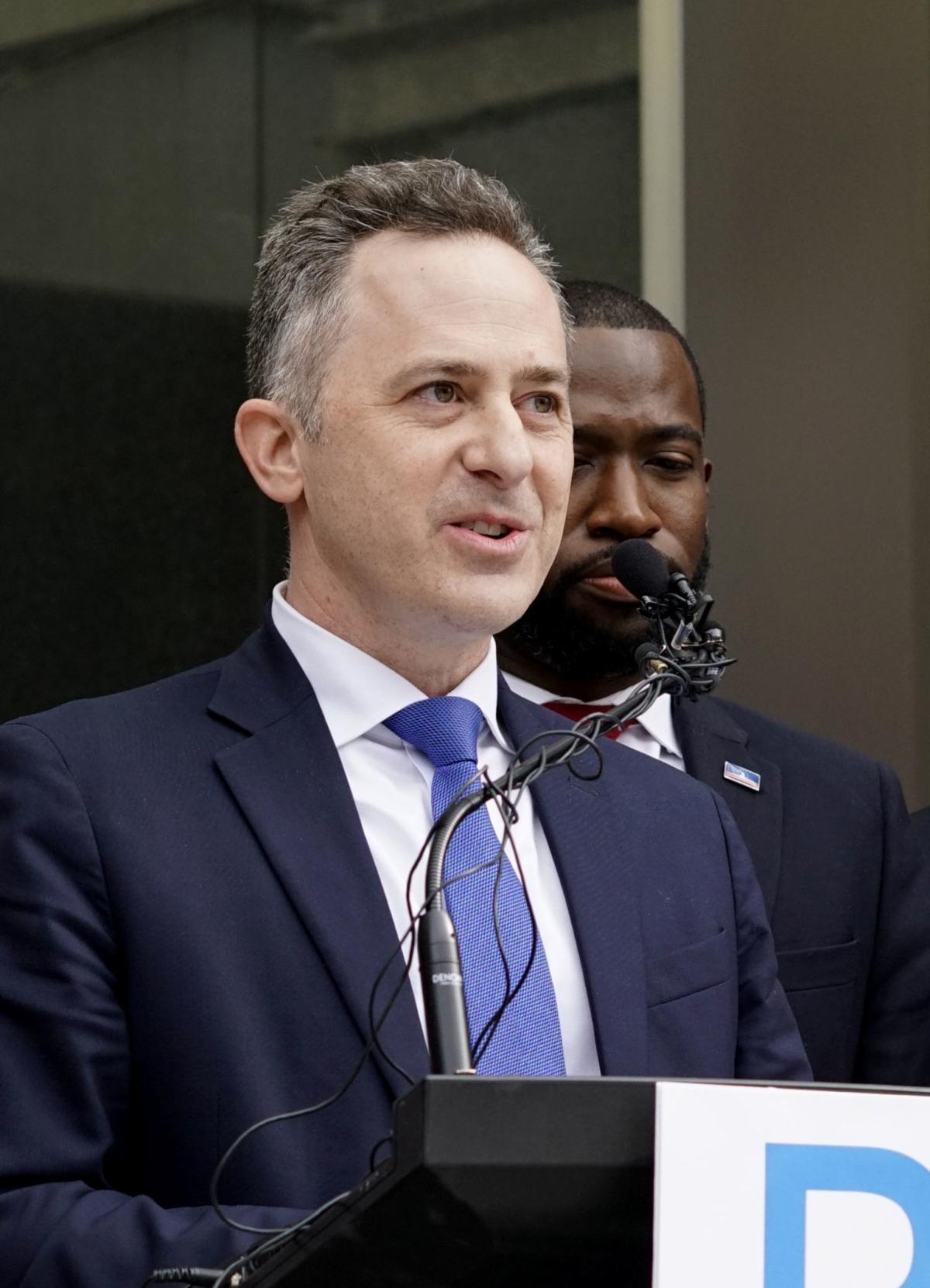