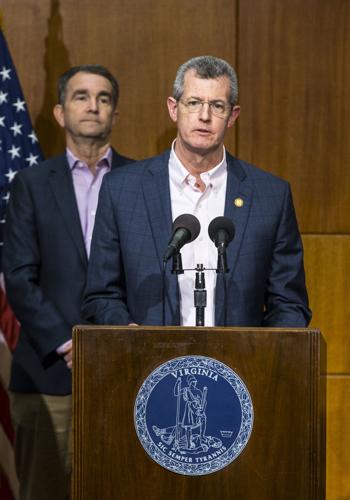 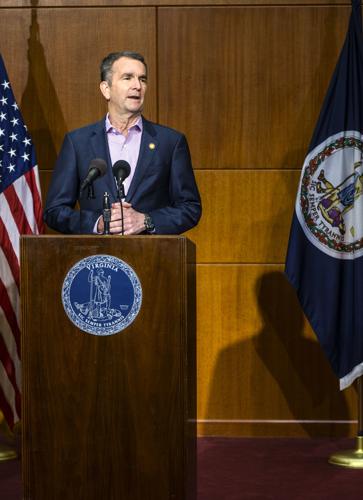 Gov. Ralph Northam speaks during a COVID-19 press briefing at the Patrick Henry Building in Richmond on Monday, April 13, 2020.

Virginia’s peak day for new COVID-19 cases could take place in mid-August, and may yield a higher number of positive cases than previously anticipated, according to new modeling from researchers at the University of Virginia made public Monday.

The projections were pitched as the first outlook for COVID-19 in Virginia that is based on detailed state data by a Virginia institution. The research suggests that social distancing policies in Virginia are effectively slowing down the spread of the disease in the state, while also warning that without a slow return to normalcy beyond the summer months, the state’s health system will become overburdened.

“This model demonstrates that if we lift the stay-at-home order or social distancing too soon, if we rush to get our lives back to normal, the number of cases will spike higher and earlier. And we can’t afford that,” Gov. Ralph Northam said during a briefing with reporters Monday.

The Virginia Department of Health reported Monday that 5,747 people in Virginia have tested positive for COVID-19, an increase of 473 cases from the 5,274 reported Sunday. The agency reported 149 deaths so far as a result of the disease.

Even as the number of confirmed cases continues to grow, researchers at UVA believe that a decrease in public activity due to social distancing and the state’s stay-at-home order have effectively slowed down the spread.

“Their sacrifices are helping. It’s an honest and powerful message,” said Madhav Marathe, a researcher with UVA’s Biocomplexity Institute.

Still, UVA’s outlook also includes some sobering prospects for Virginia: As of Monday, the model suggests that every region in the state could see its hospital systems overwhelmed beyond their surge capacity to varying degrees by the end of August. In the state’s central region, the model projects that a peak of roughly 4,000 people will be hospitalized in mid-August. In Northern Virginia, the model projects that number will reach close to 8,000 around the same time.

Researchers at UVA say that estimate is based on the most likely model among a handful of scenarios offered on Monday, which assumes that social distancing will continue at current levels and that public activity will increase “halfway” to normal after June 10, when Northam’s stay-at-home order expires. That case could yield a peak sometime between the beginning of August and September.

“That particular peak is what happens if you do nothing when you turn things back on. If you just remove the restrictions,” said Chris Barrett, the executive director of the UVA institute behind the model.

Dr. Dan Carey, Virginia’s health secretary, said during a briefing with reporters that state officials are actively exploring what restrictions make sense once Northam’s stay-at-home order expires. Carey said some examples include testing for antibodies in people who never showed symptoms, taking people’s temperatures as they go into workplaces, and using applications that trace an individual’s risk of transmission.

Northam on Monday said the state would make decisions about restrictions on an ongoing basis, as more data become available. For now, he said that an order calling for recreational businesses closed until April 23 would be expanded; he declined to share further details until Wednesday.

The UVA model is in contrast with a popular projection out of the University of Washington. That model, which projects healthcare resource use, projects that Virginia’s peak will come April 27 with 1,474 hospitalizations — far from the state’s roughly 6,500 available beds.

Researchers at UVA based their modeling on an estimate of positive cases that far exceeds those confirmed and reported by state health officials. Relying on evidence and research in New York and elsewhere, they argue that Virginia has only identified 15% of the total number of COVID-19 cases in the state.

In other words, for every positive case detected in Virginia, seven others are going undetected.

Marathe said in an interview that his team arrived at the number using evidence and research from around the U.S., which is broadly grappling with a dire testing shortage. Marathe said the 15% detection rate is “not a hard number,” but a “reasonable number for Virginia.”

“It’s a big challenge for us while we figure out how to do more testing,” he said.

Carey said on Monday that the state was actively conducting a survey of private labs currently performing tests in Virginia, including their testing capacity.

State Health Commissioner Norman Oliver said the survey data would help the state get a better sense of where the “bottlenecks” are for private labs, and work strategically toward easing them.

A month after Northam first ordered schools to be closed, he announced Monday that the state is expanding access to its pre-existing online learning network.

Northam said that Virtual Virginia, which operates under the state Education Department, will allow teachers in the state to host classes using that platform. Teachers can use the network to share lessons with students, Northam said, through June 30.

“While there is no perfect substitute for in-person classroom instruction, this is an unprecedented public health crisis and we must do everything we can to ensure all children have equitable learning opportunities,” Northam said.

Schools in the state are closed for the rest of the academic year, leading districts to create virtual learning plans so students don’t fall behind. Some school systems, including Richmond Public Schools, have already built their own online learning infrastructure, sharing lessons on YouTube and districts’ websites.

Virtual Virginia features Advanced Placement, foreign language and elective classes, among others, and is normally offered to students who don’t have access to those courses or if they have a scheduling conflict within their school.

A public school can enroll up to 15 students per Virtual Virginia class without paying enrollment fees. Private school, home-schooled, out-of-state and international students, however, must pay $375 per course.

Northam’s office said that Virtual Virginia classes will also include elementary and middle school content. Classes will start in May and the new instructional material will be available to school districts and teachers for free.

Superintendent of Public Instruction James Lane said expanding Virtual Virginia will give more options to districts “to present the instruction and content that they are unable to provide this spring in traditional classroom settings.”

“Access to the Virtual Virginia platform will be especially helpful for teachers and students in school divisions without robust distance learning systems,” he said.

Blue Ridge PBS, VPM, WETA and WHRO Public Media, working with the state Education Department, created “VA TV Classroom” so students without access to high-speed internet can still receive virtual learning. The instruction, which is for students in kindergarten through 10th grade, will stream from 1 to 3 p.m. Monday through Friday.

Lane called it “nothing short of amazing” that the stations were able to create the program within a month of Northam’s order to close schools.

In addition, there will be a special 3 to 4 p.m. session the week of April 27 for Advanced Placement test preparation.

The Virginia House of Delegates will reconvene outdoors on the grounds of the state Capitol complex for the annual veto session on April 22, a…

Majority of Virginia's coronavirus outbreaks are in long-term care facilities

Virginia has experienced nearly 100 coronavirus outbreaks, the majority of them in long-term care facilities, according to new data from the s…

A Virginia Department of Motor Vehicles employee in the headquarters office died April 7 from COVID-19, the agency said Monday in response to …

From the publisher: The RTD's mission is connecting with our community

Richmond Mayor Levar Stoney has stripped raises, vacant positions and plans for new jobs from the city’s spending plan to address a $38.5 mill…

As of Friday, seven inmates at the Central Virginia Correctional Unit #13 who tested positive for COVID-19 had worked at a cafe in the Virgini…

Gov. Ralph Northam speaks during a COVID-19 press briefing at the Patrick Henry Building in Richmond on Monday, April 13, 2020.