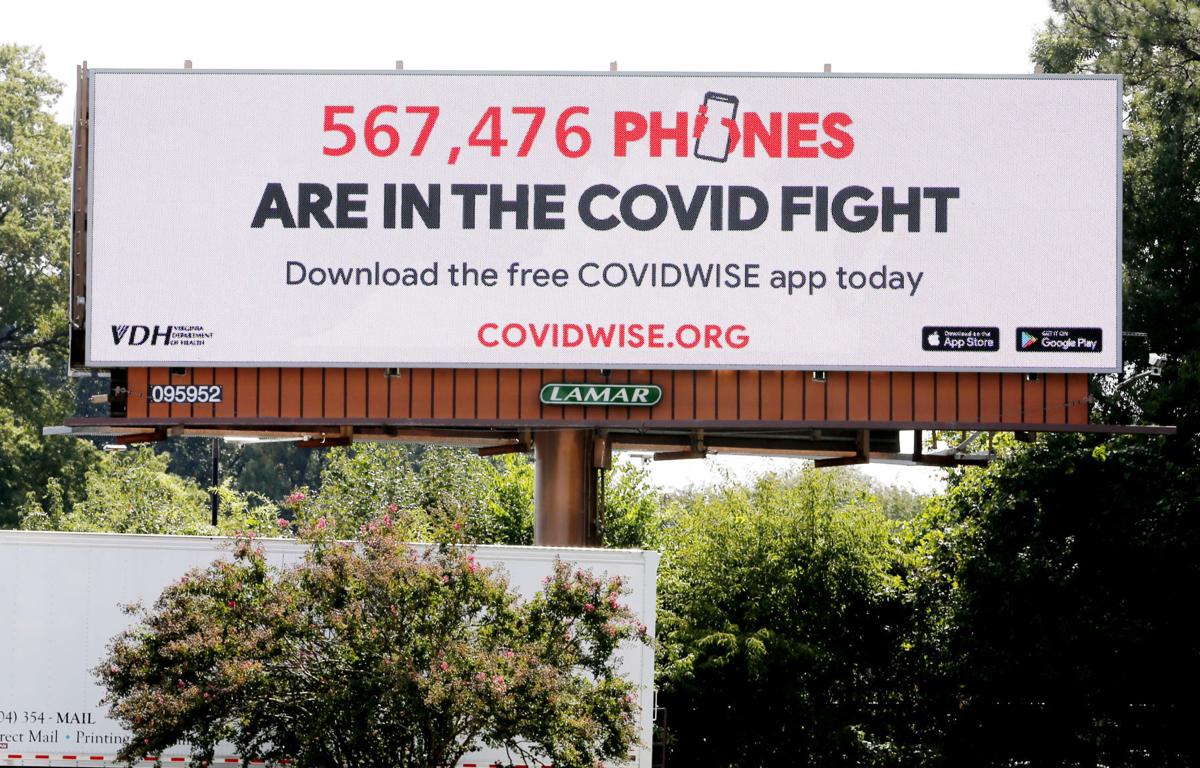 Billboards along Interstate 95 show a series of messages, one of which urges people to load an app on their cellphones to aid in COVID-19 contact tracing. The messages rotate between English and Spanish. 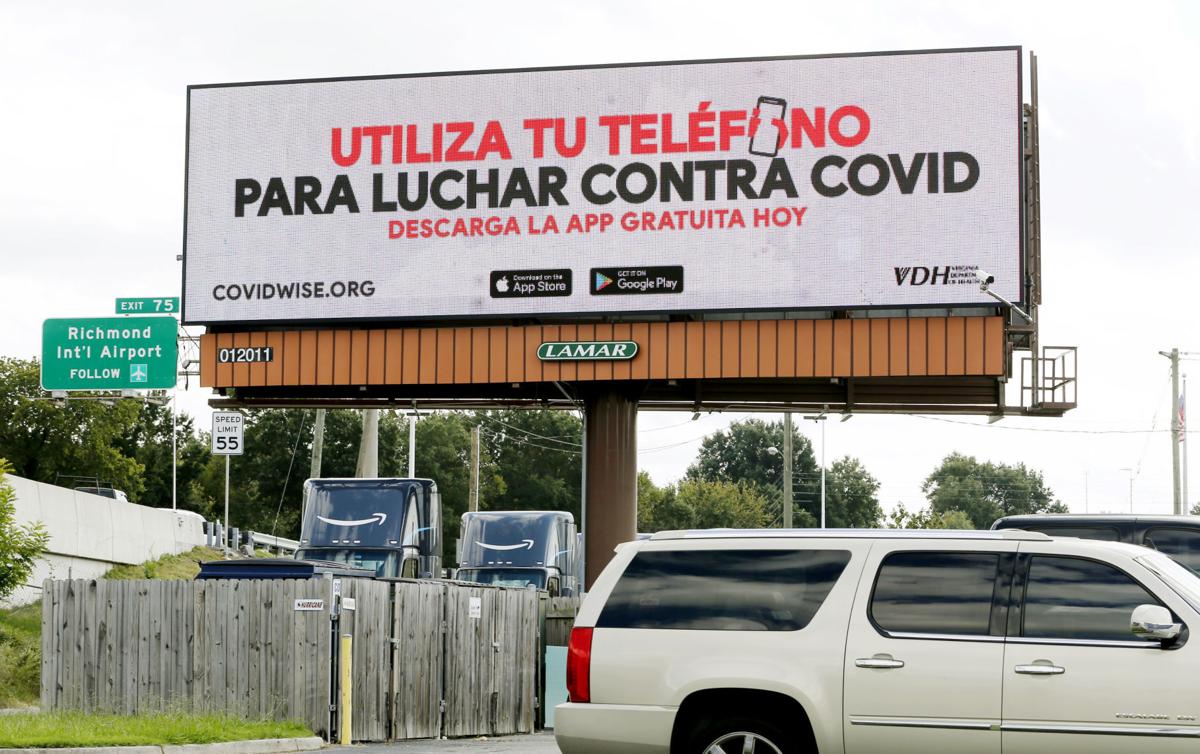 Billboards along I-95 urge people to load an app on their cellphones to aid in COVID-19 contact tracing. On I-95 the signs show a series of messages with the app message showing every 15 seconds or so. The messages cycle through with English and Spanish versions on alternating rotations.

A smartphone app that could alert its users if they had been exposed to the novel coronavirus appeared to be a boon for staving off infections and giving Virginians some peace of mind as they intermingled.

Eight weeks since its launch, however, uptake among Virginians remains low, hamstringing the benefits for the app’s users and casting doubt on the anticipated return on the state’s $1.53 million investment.

As of Oct. 1, just over 576,000 Virginians had downloaded the state’s COVIDWISE app — about 7% of the state’s population, or 13% of the estimated number of users with a smartphone. So far, 238 people have logged positive results within the app, a small fraction of the 50,377 people who have tested positive for COVID-19 in the state since the app launched Aug. 5.

Under the slogan, “add your phone to the COVID-19 fight,” state officials continue to encourage Virginians to participate in the state’s mitigation efforts, while emphasizing the app’s privacy features.

At the same time, they argue that there are COVID-19 prevention benefits to be had even at current buy-in levels, and that with Virginia being the first state in the U.S. to fully launch an application, the state has been left to experiment with how to sway people to take part.

It remains unclear why so few Virginians have heeded the call.

Ben Himmelfarb, 31, said he downloaded the app a few weeks after its release, reasoning that any privacy concerns he had for his personal data outweighed the potential benefit of knowing if he had been exposed to COVID-19.

“I didn’t download it right when it came out. I had a knee-jerk reaction about security and privacy,” the Richmond resident said. He went ahead a few weeks later, thinking about the potential for exposure at his job at a public library or while doing campaign work ahead of the November elections.

“I’m following social distancing guidelines, and all Phase 3 restrictions, but I wanted to know within that — see what would happen.”

Himmelfarb hasn’t been notified of any exposures so far, and said he’s not surprised: He understands the chances to be low, given how few people are using it.

“I know of no one else who has downloaded the app. I’m the exception among the people I know,” Himmelfarb said. “I know some of my friends who I have spoken to about it also have security concerns.”

The app, COVIDWISE, is the result of a collaborative project between Apple and Google, which had been in talks with Virginia and other states to develop and roll out the app since April.

The Virginia Department of Health, using the platform created by the tech giants, contracted with the technology firm SpringML Inc. to develop an app unique to Virginia. The state paid the firm $229,000 in federal emergency funding to develop the app, and expects to pay an additional $29,000 over the next year for technical support.

State officials have emphasized that no patient data in the hands of the VDH will ever be shared with Apple, Google or SpringML. And because the app uses Bluetooth technology, it does not track people’s locations.

When a user tests positive for COVID-19, the VDH will validate that result and offer app users a pin number — one they can enter into the app. Once they do, any device that has been within 6 feet for at least 15 minutes over the past 14 days will be notified of a potential exposure.

Public health officials hope that the information will prompt people to evaluate their symptoms, avoid the potential for spread and seek testing.

Such was the case for Gov. Ralph Northam, who got a pin within a day of his positive result and logged it into the app, prompting alerts for other administration staffers who had likely been exposed. (Other than the governor’s wife, Pam, the state has not publicized related infections. Both remain in quarantine but are doing well, Northam said on Twitter.)

On social media, onlookers commented that the worrisome public health episode could have helped raise COVIDWISE’s profile with more peddling.

Jeff Stover, a high-ranking VDH official who has been working on the app’s rollout, said the app may soon get a boost.

New technology Apple is developing will build COVIDWISE into the operating systems of all iPhones and send push notifications to users, alerting them that they can switch it on. Stover could not say when that would take place.

“Once VDH and Apple are ready, iPhone users that do not already have COVIDWISE on their phones will receive a push notification to inform them of this option,” Stover said.

Asked about the uptake rate so far, Stover said the state hasn’t set specific download targets but is pleased with the rate at which people have bought in.

“We didn’t have any set expectations — this was the first app in the U.S. to release using the Google/Apple framework. For us it was difficult to figure out, what was success going to look like?” Stover said.

He pointed to a study sponsored by Google and Oxford University that found that at 15% adoption, digital exposure notification systems could reduce infections and deaths by about 7%, “effectively complementing traditional contact tracing,” the study read.

Over the past 10 days, Stover said, an average of 189 Virginians have been notified of a potential exposure, triggered by someone reporting a positive result.

One of those Virginians was Jon Haley, 37, who tested positive last month, received a pin for the state, and logged it into COVIDWISE.

“It was very easy, very intuitive,” said Haley, who lives in Henrico County. The experience was different for his wife, who tested positive but was never issued a pin by the VDH to log her result.

“She has the app, and asked them for the pin, and just never received one,” Haley said.

Stover said he has heard of other instances of never-issued pins, and chalked it up to “growing pains” within the state’s contact tracing workforce, which has ballooned in just a few months as leaders work to train staff.

Haley said he was hesitant to download the app at first and worried about his privacy. Both Himmelfarb and Haley heard about the app from the governor’s news conferences.

“When they explained the process — the tokens, and the Bluetooth connectivity — that eased my concerns,” he said. “I wanted to download it because I wanted to help, however I could.”

It’s the kind of motivation state officials want to tap as they market the app through a $1.5 million campaign that launched in August. The effort is being led by the Richmond-based firm Madison+Main, which had sought to rally Virginians to “join the fight” against COVID-19 with the first iteration of its public campaign.

The firm is advertising in English and Spanish, through web and social media ads, partnerships with companies and nonprofits, TV and radio ads, and now even billboards and bus wraps.

They are also working with an analytics firm called AlphaVu, which scans social media for mentions of COVIDWISE, allowing the ad agency to target ads to places where misinformation about the app is spreading.

Whitfield said that in coming weeks, the campaign will include a new slogan: Save Lives, Get COVIDWISE.

“It makes it a little bit more actionable. Simply by downloading a free app you can potentially save lives,” she said.

Within her own team, the app has already proved effective. A few weeks ago, the owner of the agency received an exposure notification and went on to isolate for a few days.

Asked about the rate at which people are opting to participate, Whitfield said:

“We’re paving the way, figuring it out,” she said. “I’ve worked in the advertising industry for 15 years, but this one is like no other campaign. This has to do with saving lives, and our team is working nonstop.”

‘Add your phone to the COVID fight’: Virginia rolls out new app to alert people of possible coronavirus contact

‘Add your phone to the COVID fight’: Virginia rolls out new app to alert people of possible coronavirus contact

Billboards along Interstate 95 show a series of messages, one of which urges people to load an app on their cellphones to aid in COVID-19 contact tracing. The messages rotate between English and Spanish.

Billboards along I-95 urge people to load an app on their cellphones to aid in COVID-19 contact tracing. On I-95 the signs show a series of messages with the app message showing every 15 seconds or so. The messages cycle through with English and Spanish versions on alternating rotations.