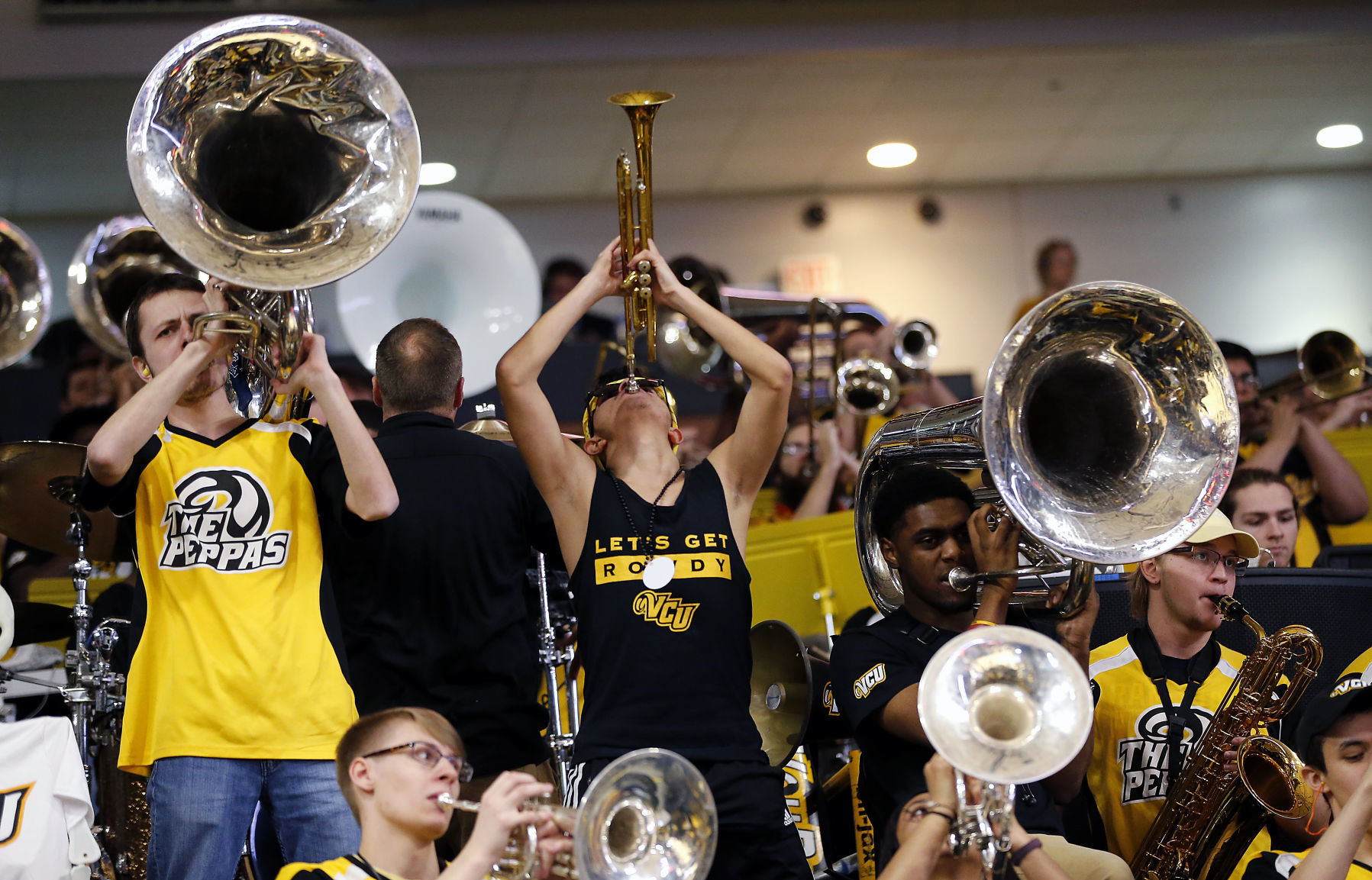 When he was a student at Highland Springs, Dante Chambers was an especially talented musician. He played saxophone, French horn and snare drum, and he even arranged his own music, taking pre-existing songs and reconfiguring them for the school marching band.

In the fall of 2001, when he was a senior, he attended a football game between Norfolk State and North Carolina A&T, and he paid close attention to the school bands. Little did he know that day, Chambers would be inspired to arrange a hit stadium song, a tune that would be played for decades to come across the Richmond area.

The song’s first notes belong to the tubas: F, G, then A-flat played in a syncopated bass line, belted so loudly the sound echoes off the opposite wall of the arena. The band starts jumping up and down on beats 2 and 4, and the drummer joins in with a funky beat. Then the chanting begins.

Senior Frank DeMauro (left, tuba) learned to play “You Don’t Want to Go to War” before he ever joined the VCU pep band.
Mark Gormus

Senior Frank DeMauro (left, tuba) learned to play “You Don’t Want to Go to War” before he ever joined the VCU pep band.
Mark Gormus

Then horns come to their mouths, and the band is at full volume now, playing the melody, bouncing from side to side on the downbeat. At the Siegel Center, this is the signal that a basketball game is about to begin. The Peppas, the school’s renowned pep band, play it moments before every tipoff.

Perhaps no song resonates with VCU fans the way this one does. It’s called “You Don’t Want to Go to War” or simply “War,” as referred to by the Peppas. It became a part of the school’s identity in 2011 as the men’s basketball team enjoyed a crescendo of its own when it reached the Final Four. You could buy a T-shirt with its lyrics emblazoned across the front.

“It’s made to be a community experience.” Noah Mason, Peppas tuba player

The tune has been shared with high school ensembles across the area, and now it’s likely the most played song at a sporting event in greater Richmond.

And it’s not hard to see why. First, the music is easy to learn. When the Peppas invited 167 middle schoolers to play alongside them at the Siegel Center this year, the college students taught it to the middle schoolers, who picked it up quickly. Many of the college students themselves learned it not by reading the sheet music but by watching others. The song essentially is four measures repeated over and over.

And the volume? As loud as it gets. The term for how you play ‘War,’ said Peppas tuba player Noah Mason, is “cranking,” a controlled blasting of the instrument, a loudness that’s never really reached in a concert band setting. It takes pushing an aggressive amount of air through the instrument to achieve the desired sound.

Unlike a concert band setting, the song isn’t meant to be listened to only. You’re supposed to sing along — or shout along, really. There are just two lines of lyrics to learn, and any school’s mascot can be inserted to the first line.

“It’s made to be a community experience,” Mason said.

“Everyone’s in on it, and it’s daunting and intimidating. It’s infectious,” said Ryan Kopacsi, the band’s former director. “The bass line is amazing right?” The sheet music that was written by hand for the VCU pep band in 2011 is still used by the band today.

The tubas play the first notes, and they play the backbone of the song around which the other parts are built.

The bass line belongs to the tubas, the stars of “War.” They bellow the song’s first notes, and they are the backbone around which the other parts are built.

But their notes don’t come from the original “You Don’t Want to Go to War.” They come from a 1988 funk tune called “Skin I’m In” by the band Cameo. The words come from a song called “You Don’t Want to Go to War” by the New Orleans brass band Rebirth, which was written to a different tune in a different key. The original second line was a bit more crude: “Don’t start no s---, won’t be no s---.”

In the late 1990s, Rebirth would perform in parades, marching down the streets of the French Quarter, playing its music. It wrote “War” as a declaration to other bands — Rebirth was the best band on the streets, said Keith Frazier, a founding member and bass drummer. It was written around 1998 or 2000 — Frazier doesn’t remember exactly — and was released on the band’s 2001 album “Hot Venom.”

The version of “War” that’s played now is actually two songs combined into one. The words come from the song “You Don’t Want to Go to War” by a New Orleans brass band called Rebirth.

This clip of "You Don't Want to Go to War" by Rebirth is reproduced with permission and contains explicit lyrics.

By the fall of 2001, the North Carolina A&T marching band played both “You Don’t Want to Go to War” and “Skin I’m In” in stadiums at football games. One Saturday, the marching band traveled to Norfolk State and Chambers, the Highland Springs musician, was among the spectators.

First he heard “War,” and then “Skin I’m In” was the last song of the day. He got the idea — what if he merged them together? He took the parts he liked best — the bass line from “Skin I’m In” and the words from “War” — wrote it all down and gave it to his band director, Thurman Hollins. The director liked what he heard and added it to the Springers’ repertoire. It quickly became the school’s signature song.

For Chambers and the rest of the band, “War” brought excitement to an unrestful atmosphere. The band had gone through four directors in four years and needed something to unify its members.

“We felt like we needed that one thing, and [“War”] turned out to be it,” Chambers said.

It became the song played when the team took the field or court. Brandon Rozzell, who played basketball at Highland Springs, said the fans would go nuts when the tune was performed. When Rozzell graduated and enrolled at VCU, he suggested it be added at Rams basketball games.

Kopacsi, the VCU band director at the time, first heard the anthem in the fall of 2010 at a football game hosted by his alma mater, Varina, which had started playing it. Kopacsi heard it, and he became fond of the song immediately.

“Man, this is really dope,” he said at the time.

He had a vision of the entire Siegel Center chanting alongside the Peppas, of the whole arena hopping up and down. So he had the song written out by hand on blank staff sheets and distributed to the band.

The version of the song played in the Richmond area is actually two songs merged into one. The words were written by a band called “Rebirth.” The bass line comes from a 1988 song called “Skin I’m In” by the band Cameo.
Mark Gormus

The version of the song played in the Richmond area is actually two songs merged into one. The words were written by a band called “Rebirth.” The bass line comes from a 1988 song called “Skin I’m In” by the band Cameo.
Mark Gormus

“War” caught fire at the CAA tournament at the Coliseum the following winter, trombone player Scott Pinkstaff said. The basketball team started winning NCAA tournament games, kept advancing, and the band played it each step of the way in Dayton, Chicago, San Antonio and Houston. The VCU team became the biggest story in basketball that year, and the band received a portion of that attention. The group got a shout-out from ESPN’s Scott Van Pelt, and Kopacsi started getting recognized in airports.

It was all a surreal time in his life, Kopacsi said.

During the past decade, high school bands across the area have adopted “War,” including Mills Godwin, Glen Allen, Cosby and Clover Hill. Wichita State took it, too, not long after its basketball team opposed VCU.

Frazier, Rebirth’s bass drummer, never knew the song had achieved such popularity as a stadium song or that it had been mixed with “Skin I’m In” until he was contacted for this story. The idea of mixing his band’s song with another tune doesn’t bother him one bit. That’s what New Orleans jazz is all about, he said, improvising — the act of taking something you already know and putting your own spin on it.

Rebirth still tours — it even visited Richmond earlier this year. While “You Don’t Want to Go to War” isn’t its most popular song anymore, it still finds its way onto set lists from time to time. The sheet music that was written by hand and distributed to the Peppas during the 2010-2011 season is still used by the band today, though some small changes have been made, like stretching a tuba’s eighth note into a quarter note.

Chambers, who was 17 when he arranged the song, became a middle school band director in Durham, N.C., and now directs the percussion at N.C. Central University. He had no idea a tune he put on paper would enjoy a lifespan of two decades and more. Highland Springs still plays it to usher its football players onto the field, and a rap version greets students each morning on the school’s PA system. Rozzell said he still gets goosebumps each time he hears it.

There are some 270 songs in the Peppas’ library, including dusty charts that haven’t been called in years, like Chicago’s “25 or 6 to 4,” and there are new additions, including “Saddam A Go-Go,” a metal piece by Richmond shock-rock band GWAR. And yet, “War” hasn’t lost its standing. It’s helped grow the band’s popularity from 40-some members in 2011 to as many as 109 this year.

And it has inspired countless musicians to redefine themselves. Bryant Steggall, a junior advertising major and a member of the Peppas, switched from clarinet to tuba years ago, and ‘War’ was the first song he learned on his new instrument. Frank DeMauro, another tuba, learned it for fun at home before he ever joined the pep band.

Mason, the other tubist, started life as a musician as a trumpet player. He still remembers the first day he heard “You Don’t Want to Go to War” as a freshman at Glen Allen High School. It was a Thursday rehearsal during the fall semester when a senior tuba started blowing out the notes, F, G, then A-flat, and Mason was entranced. “What is that?” he asked. Whatever it was, it was something he knew he had to be a part of. By the following spring, he had switched instruments, trading his trumpet for a tuba. 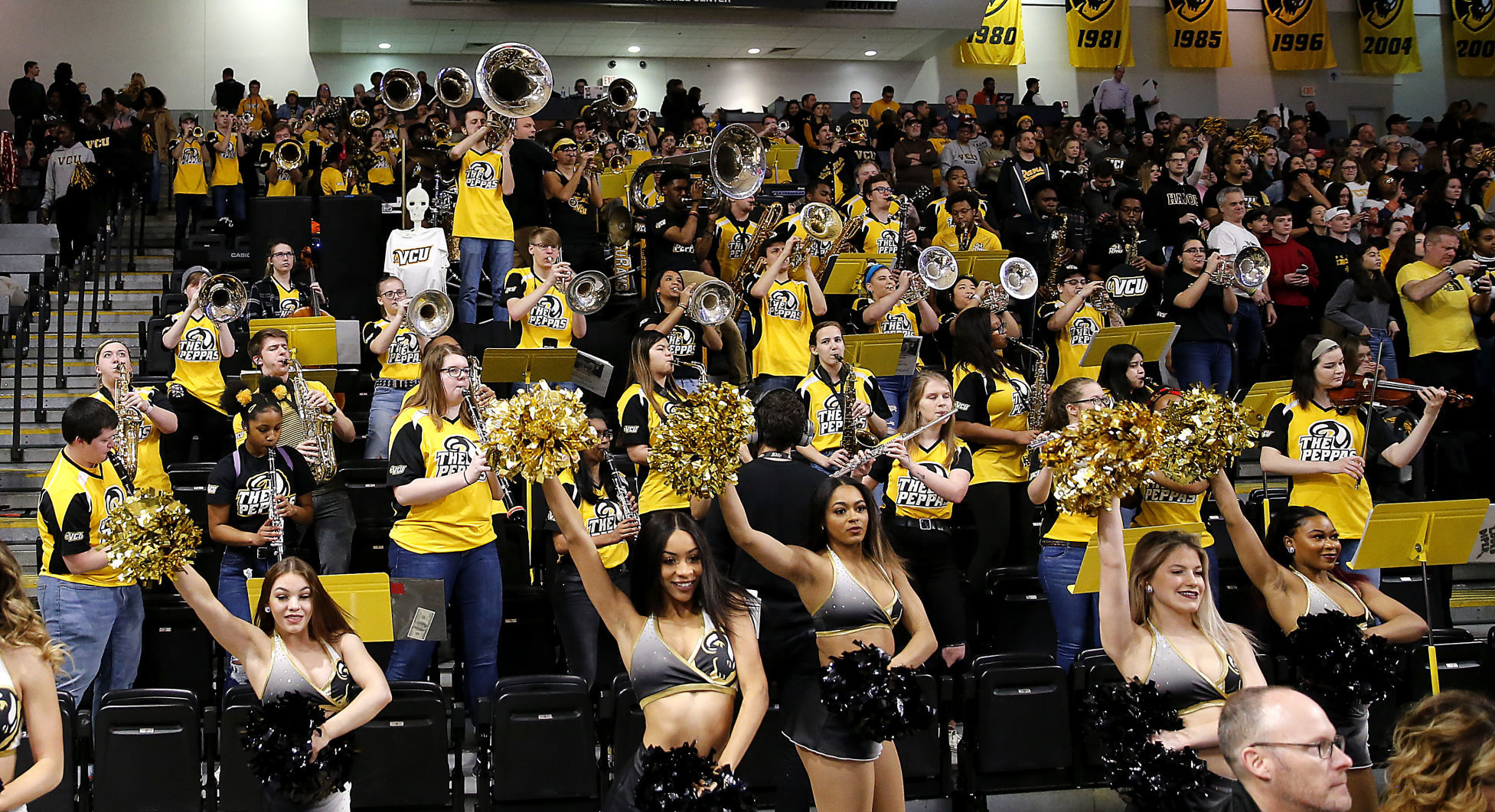