Sometimes seemingly silly things can make a profound impact. Anyone who has witnessed a charitable fundraiser like the infamous Special Olympics Polar Plunge can attest to the zany joy of watching grown people dress up in silly costumes and jump into cold water to raise funds for a noble cause. But all too often, one’s charitable action is not done in close proximity to the impact it makes on society. That’s why in 2018, Special Olympics Virginia’s Polar Plunge in Richmond is evolving into the nonprofit’s first ever Solar Plunge at Summer Games.

True, there may be some strategy behind placing a cold pool at the organization’s hottest event of the year. Logic tells us that more folks may be willing to jump into cold water in the soaring heat of June versus the frigid cold of February. But the clincher behind Solar Plunge is actually about bringing the fundraiser closer to those it serves, the athletes and volunteers of Special Olympics.

Greg Green of Davis & Green Electrical is one of those volunteers. “For the past three years, in addition to volunteering our generators and services to make Richmond’s Plunge event a success, we also put together a corporate team to raise funds. A few months later, we always made it point to volunteer at Summer Games too, but now, we can do both at the same time. I’m looking forward to jumping out of the plunge pool to place a medal around the neck of an athlete who just competed. That’s instant gratification!”

Davis & Green isn’t the only group that’s looking forward to taking the Solar Plunge. Chief Dave McCoy of the University of Richmond Police Department is also excited about the changes. “We are used to running the Flame of Hope into the Opening Ceremony and being a part of the pageantry of Summer Games, but we also like to show how Special Olympics helps us build trust within the community. That’s a critical component of 21st century policing,” he said. Proceeds from the Solar Plunge will also benefit the year-round Law Enforcement Torch Run initiative that is actively recruiting new agencies across the state to be part of its movement to promote Special Olympics.

In addition to participating in a nearly 2,000-mile relay to Summer Games each June, Torch Run volunteers also plan Plane Pulls, Cover the Cruisers and Tip-A-Cop events throughout the state. Unbeknownst to many, law enforcement volunteers all over the globe support Special Olympics programs and events that serve millions of families and athletes of all abilities. The scope of their impact has literally exploded over the past decade, thanks to the organization’s focus on unifying youth through sport.

The power of proximity

Todd “Parney” Parnell, General Manager of the Flying Squirrels, goes for cold alongside Nutzy, the Squirrel’s mascot. Nutzy will again be join…

“Our vision is simple: Radical inclusion in every school and every community,” stated Rick Jeffrey, Special Olympics Virginia’s president and head coach. “We’re supporting FREE Unified Sports® programs in more than 400 schools in Virginia. We would never be able to keep up with schools’ demand for this program if it weren’t for the unwavering support of sponsors like Davis & Green and our incredible Law Enforcement partners. On June 9, you will see students raising funds to help sustain our programs in their schools, athletes raising money to head to USA Games in Seattle, law enforcement providing event security, holding towels and of course making a splash of their own. It may be the only place in town where a cannonball in an aboveground pool has an immediate ripple effect on the community.”

To learn more about the Solar Plunge at the University of Richmond on June 9, visit specialolympicsva.org.

This feature is one in a series about the Richmond Region’s nonprofit organizations and their contributions to our communities.

It is brought to you by the featured organization in collaboration with the sponsoring advertiser on this page. 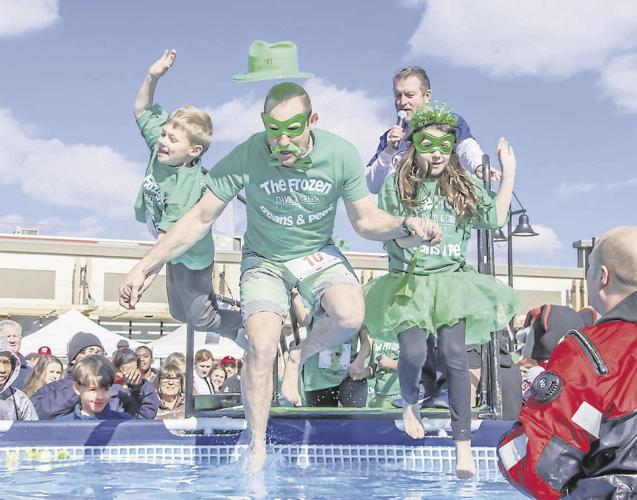 Greg Green and his children, Kenton (left) and Ella (right) make a splash for Special Olympics Virginia at the RVA Polar Plunge in 2016. This year we’re going SOLAR, June 9, at the University of Richmond during Summer Games. 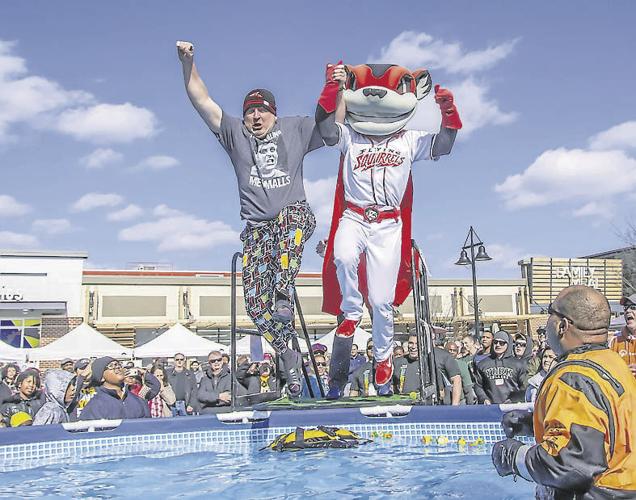 Todd “Parney” Parnell, General Manager of the Flying Squirrels, goes for cold alongside Nutzy, the Squirrel’s mascot. Nutzy will again be joining us at the Solar Plunge on June 9.