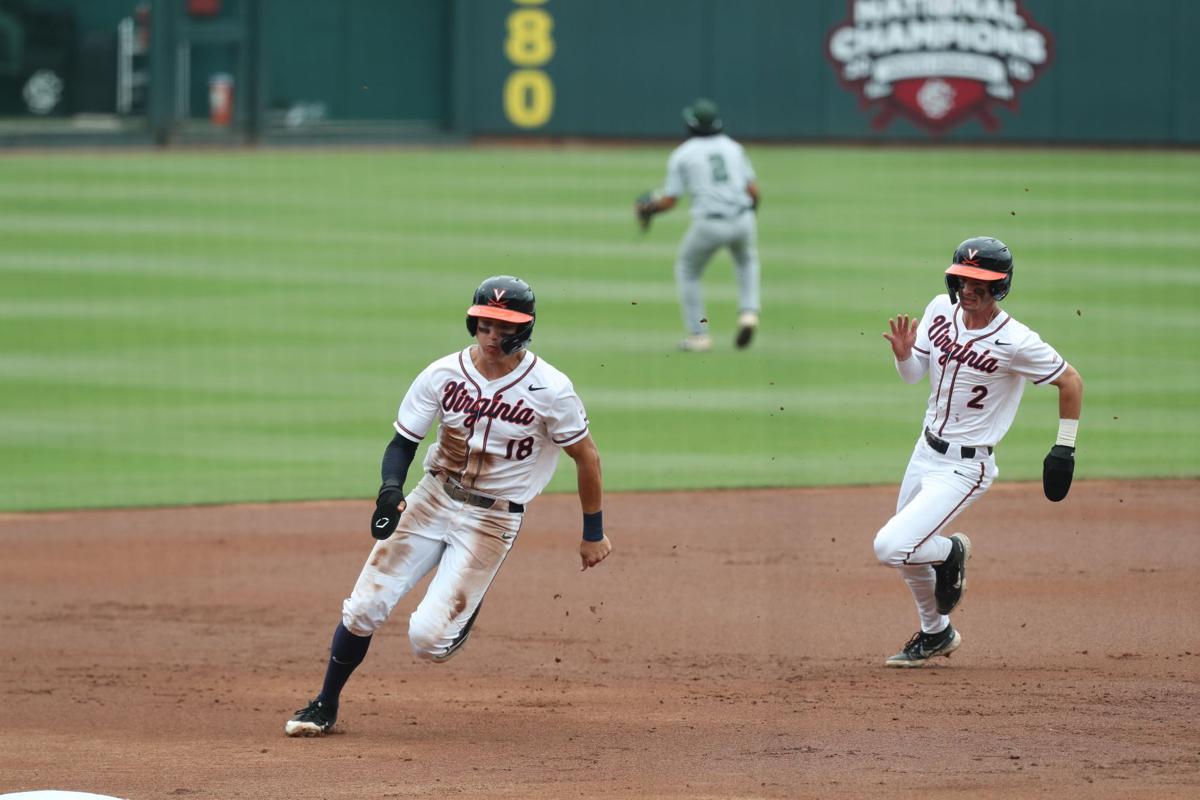 Virginia’s Zack Gelof, front, and Max Cotier head toward third base during the Cavaliers’ win over Jacksonville in the Columbia Regional on Sunday in Columbia, S.C. 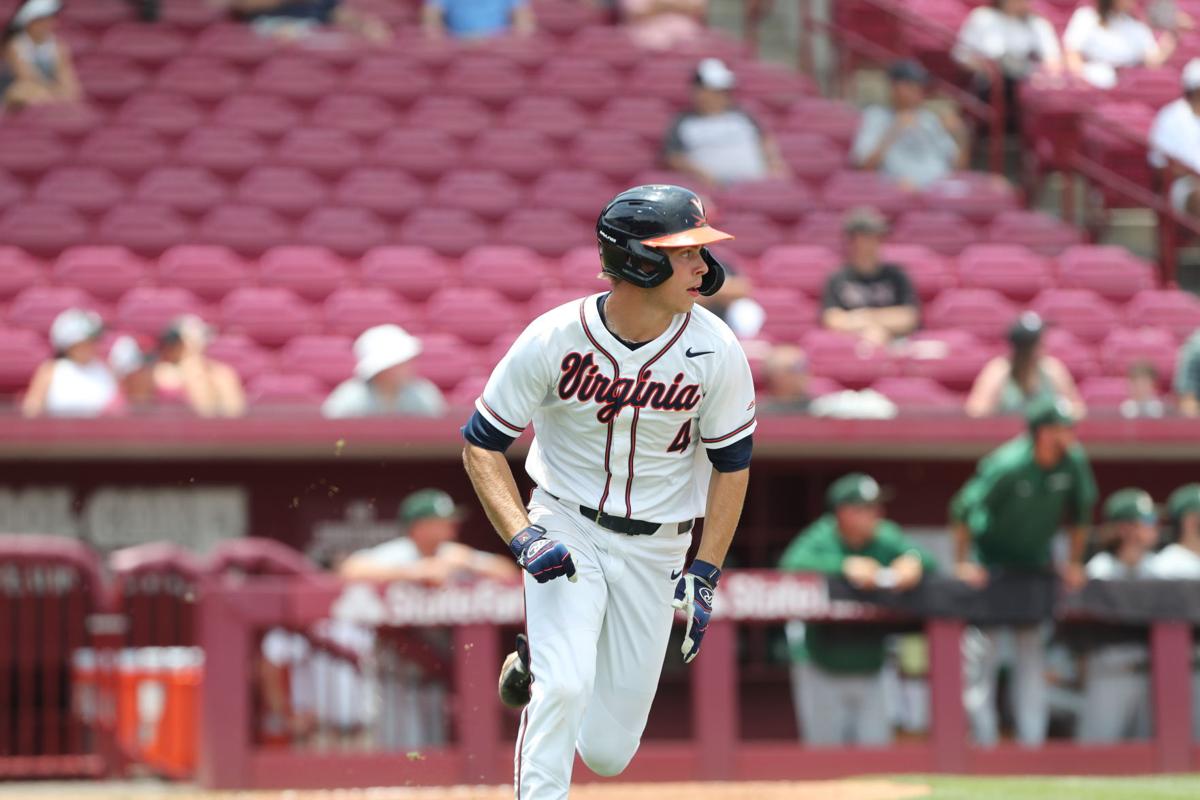 Virginia’s Nic Kent watches his hit as he heads toward first base during the Cavaliers’ win over Jacksonville in the NCAA Tournament on Saturday in Columbia, S.C.

“Our backs were against the wall and we all knew that we got to win this game to move on and that’s how it is from here on out,” freshman Kyle Teel said.

Coach Brian O’Connor frequently talks about the need for multiple guys in a lineup to step up. The Cavaliers had that in Saturday’s 13-8 win over Jacksonville.

Four players, including Teel, had at least three hits. Every starter had at least one hit as the Wahoos finished the game with 21, a program record for an NCAA tournament game.

“This is what you have to do when you fall into the losers’ bracket,” O’Connor said. “Sometimes you have to outslug somebody.”

Thanks to the offensive outburst, UVA fought off elimination and ended the Dolphins’ season.

The challenge ahead is managing their pitching staff as they try to win three games in the next two days to make a super regional. After the game, O’Connor said he had no idea which pitcher the Cavaliers would start Sunday.

Jacksonville (16-34), the No. 4 seed in the Columbia Regional, knocked out UVA starter Mike Vasil in the third inning. The Cavaliers’ No. 2 starter failed to record an out in the top of the third, allowing five consecutive singles to open the frame.

The Dolphins led 5-3 after three innings, and UVA turned to its bullpen. That meant using sophomore lefty Nate Savino, which was not the ideal plan entering Saturday.

Reliever Kyle Whitten, who retired the first six batters he faced in relief of Vasil, struggled in the fifth. He hit a batter before allowing a single and a sacrifice bunt. Savino, often a weekend starter, relieved the senior right-hander but allowed the two inherited runners to score.

After that, Savino was solid, pitching the final 4 2/3 innings. He allowed just one run, two hits and a walk.

“We needed to stop momentum for them,” O’Connor said of using Savino.

Savino’s outing put Virginia in a position to win, but he’s also one of the team’s best starters and he threw 61 pitches. The Cavaliers will need to be creative with pitching options to finish the weekend.

An RBI single from Max Cotier with the bases loaded pulled UVA to 7-6 in the bottom of the fifth, but Elias Flowers made a stellar defensive play to keep the Dolphins in front. After making a sliding grab in left field in the bottom of the fourth with two outs and the bases loaded, Flowers gunned down Chris Newell at home to end the fifth. It was the second time in the game UVA ran into an out as home (Cotier was thrown out in the first inning).

O’Connor’s team broke open the game in the sixth.

The Cavaliers used a single, stolen base, walk, wild pitch, double and fielding error to score two runs and take an 8-7 lead. Two batters after Kent’s double, freshman Jake Gelof hit a two-run home run to left-center field. The home run was Gelof’s third in four games after not hitting a home run in the team’s first 50 games.

Jake’s older brother, Zack, went 4 for 5 with a pair of runs scored. The siblings have 16 hits, including five home runs, in their last four games.

An RBI single from Cotier gave the Cavaliers their fifth run of the sixth inning and an 11-7 lead.

Savino yielded a run in the seventh, but Newell’s solo home run in the eighth and an RBI single from Ortiz pushed Virginia’s lead to five.

UVA will play the loser of top-seeded Old Dominion and South Carolina, who played late Saturday night, on Sunday at noon.

Virginia’s Zack Gelof, front, and Max Cotier head toward third base during the Cavaliers’ win over Jacksonville in the Columbia Regional on Sunday in Columbia, S.C.

Virginia’s Nic Kent watches his hit as he heads toward first base during the Cavaliers’ win over Jacksonville in the NCAA Tournament on Saturday in Columbia, S.C.