'A way of life': At age 68, longtime coach Kevin Rogers is still fired up to get on the football field
0 comments
Share this
1 of 4 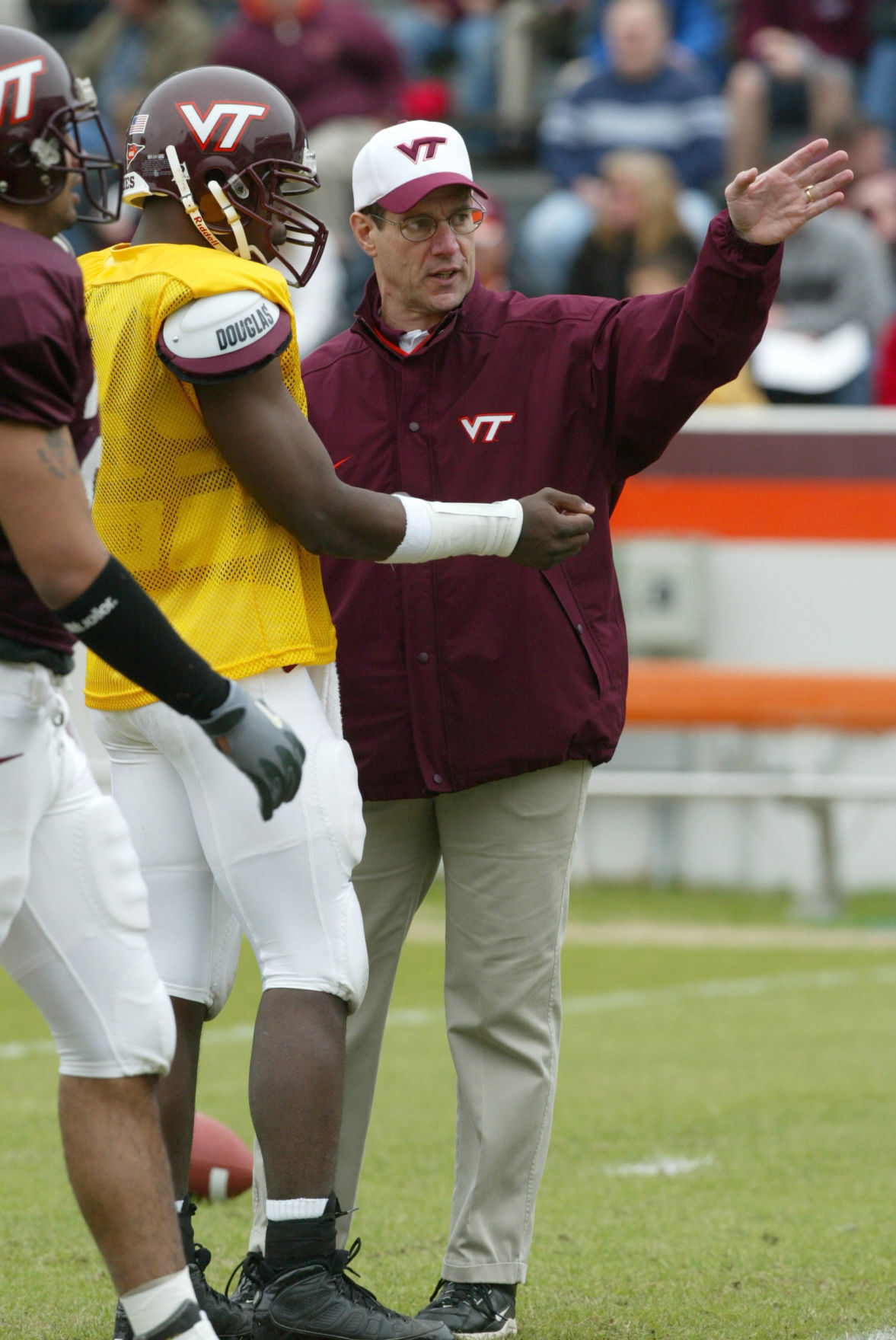 Kevin Rogers served as the quarterbacks coach at Virginia Tech for four seasons. Under Rogers’ guidance in 2004, Bryan Randall threw for 2,264 yards and 21 touchdowns, earning him ACC player of the year honors in the Hokies’ first year in the league. 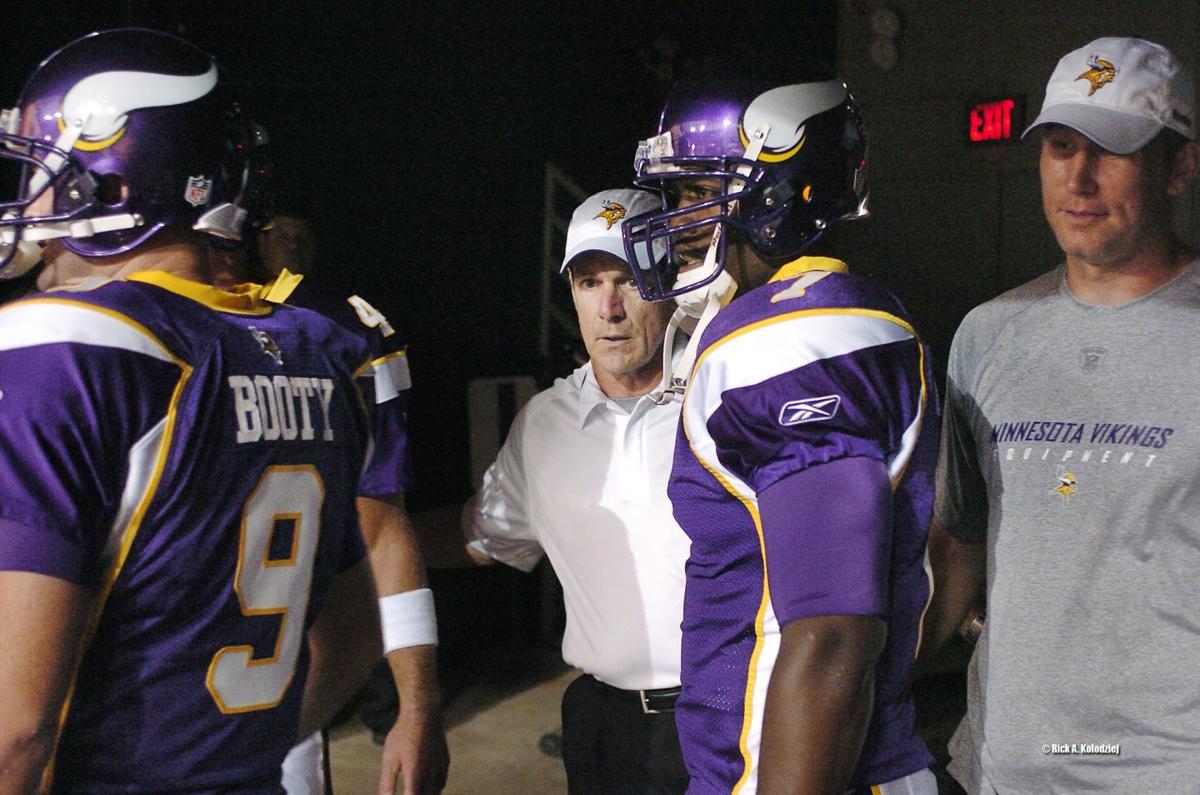 Kevin Rogers during his time with the Minnesota Vikings. 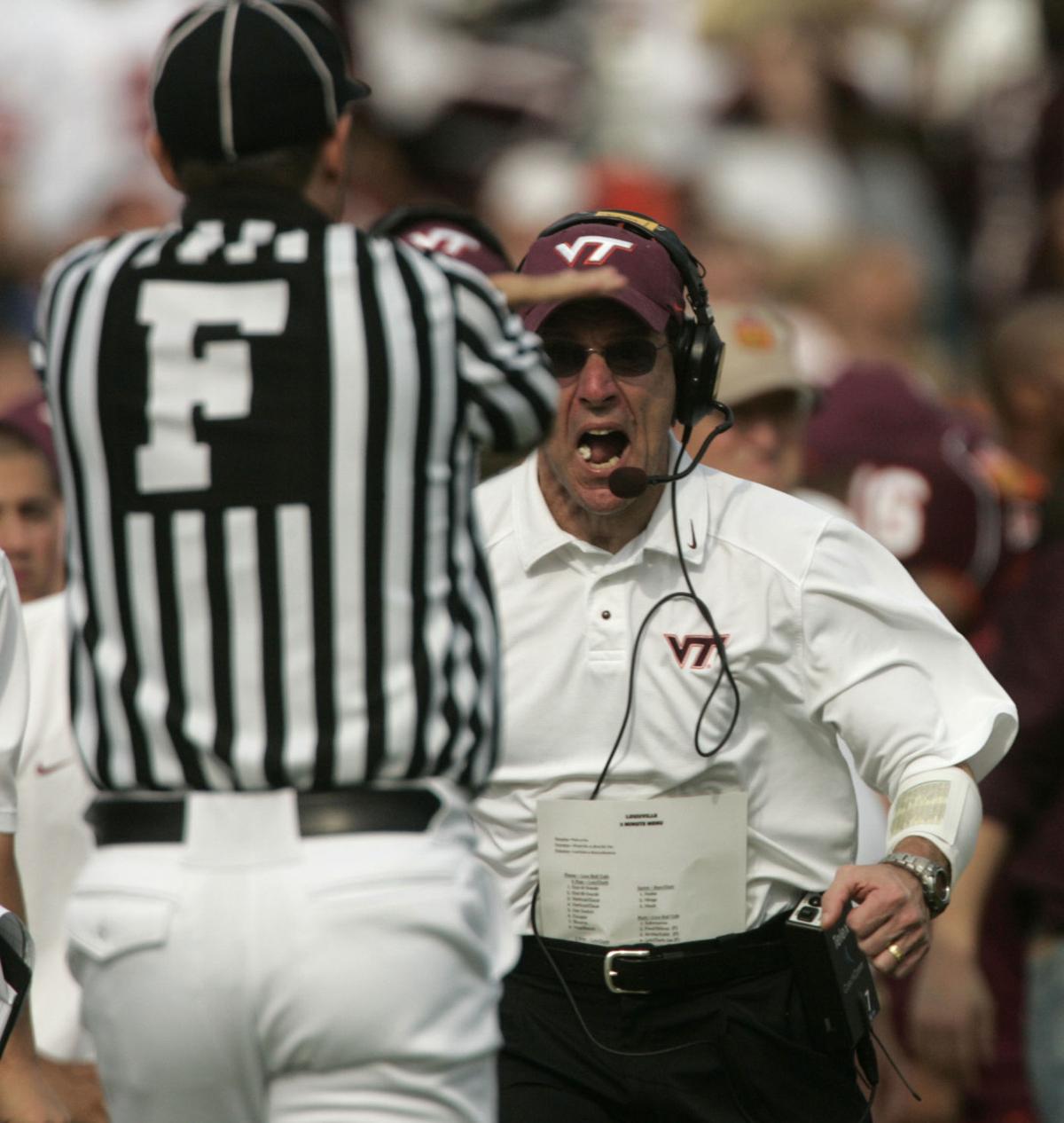 Kevin Rogers has coached at every level of football, starting as an assistant at Bayside High School in 1974 and most recently joining the Cleveland Browns. His college coaching stops included Virginia Tech, Notre Dame and his alma mater, William & Mary. 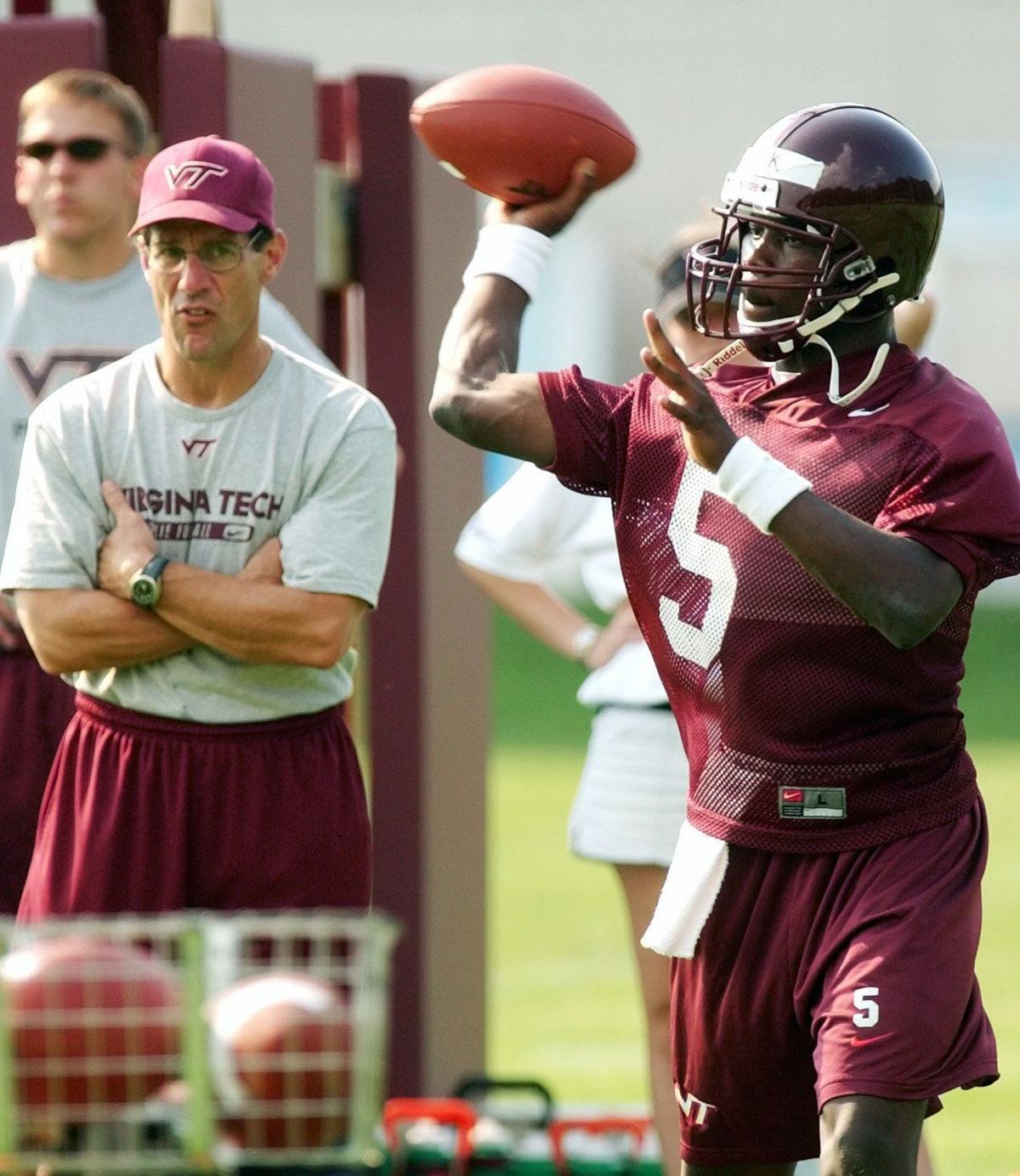 Kevin Rogers was 65 when he resigned as William & Mary’s offensive coordinator and quarterbacks coach in early 2017. He’d coached for 42 years, on stages ranging from Virginia Beach’s Bayside High to the Orange Bowl to the NFC championship game, and had worked with the likes of Woody Hayes, Frank Beamer, Urban Meyer, Brett Favre and Donovan McNabb.

But Rogers didn’t want to leave football. His body forced him to. Three-plus years later, this grandfather of six is back.

Football is “a way of life,” he said. “I’ve been doing it as a player or a coach for [more than] 50 years now. There was just something missing. It was like Groundhog Day, especially with the pandemic. It’s really a dream come true for me at 68 years old.”

Rogers played linebacker at W&M for Lou Holtz and coached there twice, both times under Jimmye Laycock. His penultimate season in Williamsburg saw the Tribe share the 2015 Colonial Athletic Association title with James Madison and Richmond and reach the second round of the Championship Subdivision playoffs.

But Rogers couldn’t approach the job with the commitment he believes it demands. He was in too much pain.

“The poor guy sucked it up,” Laycock said. “I tried to tell him to back off, but he’s old school. He only knows one way to do things.”

Prior to spring practice in 2017, Rogers resigned, and eventually his discomfort steered him back to surgeon Brad Currier at the Mayo Clinic in Rochester, Minn. Currier had performed Rogers’ lumbar decompression about a decade earlier, when Rogers was the Minnesota Vikings quarterbacks coach.

But this procedure, a spinal fusion complete with rods and screws, was exponentially more taxing.

“Let’s put it this way,” Rogers said with a laugh. “It was Division I surgery.”

The first stage lasted 16 hours, after which Rogers remained in an induced coma. The second stage required eight more hours, followed by three weeks of hospitalization.

Nearly two years removed from the surgeries, Rogers is pain-free.

Fine enough to coach again. But Rogers isn’t naïve. He knew the market for a career assistant in his late 60s who hadn’t worked in three seasons was, to be charitable, limited.

Rogers was a graduate assistant to Hayes at Ohio State and worked with Meyer at Notre Dame. As Syracuse’s offensive coordinator and quarterbacks coach from 1991-98, he tutored McNabb and Marvin Graves and helped the Orange post eight consecutive winning seasons, earning Orange Bowl and Fiesta Bowl bids along the way.

At Virginia Tech, Rogers coached Bryan Randall to an ACC player of the year season in 2004, when the Hokies won the conference championship. With Rogers as his position coach, Favre, then 40, threw 33 touchdown passes in 2009, completing a career-high 68.4% of his throws and leading the Vikings to the NFC title game.

“The longer you’re out, the more your opportunities diminish,” he said. “Nothing on the cell phone happens other than crickets. No one’s really interested in talking with you. You’re out of sight, out of mind, and that’s basically what happened to me.”

Then in January, Stefanski, a Rogers protégé from their time together in Minnesota, landed his first head-coaching gig. He assembled a staff that included several former Vikings co-workers, and Rogers is the latest addition.

“It’s great to add someone with Kevin’s expertise to the staff,” Stefanski told Andrew Gribble of the Browns’ website. “He has seen so many offenses on every level of football, and the knowledge he brings will be invaluable at every position.

“I remember being a young coach in this league and having the opportunity to pick Kevin’s brain on so many coaching topics. He truly was a great mentor, and it’s so important to have that element on your coaching staff. Kevin is going to be a great resource for all of our players and coaches.”

Headlined by quarterback Baker Mayfield, receiver Odell Beckham Jr., and running back Nick Chubb, Cleveland’s offense does not lack for talent — or personalities.

“I look at what he’s done in his career and the things he’s overcome,” Rogers said of Mayfield. “It’s simply amazing. We’re talking about a guy who was a walk-on quarterback [at Texas Tech], a transfer, ends up winning the Heisman [at Oklahoma] and winds up becoming the No. 1 pick in the NFL draft. That tells me this guy is different. This guy has winner written all over him.”

Cleveland has endured 12 consecutive losing seasons, including an 0-16 slog in 2017. The Browns haven’t reached the playoffs since 2002 and haven’t won a postseason game since 1994, when Bill Belichick was their coach.

Laycock believes Rogers will be an asset to a rookie big whistle such as Stefanski.

Rogers “knows different ways of getting things done [on offense],” Laycock said. “The thing about him is, he has definite opinions about things, and he’s not afraid to voice them, and not in a negative way. I think that’s what you want in somebody in an advisory role. … You don’t want someone who’s wishy-washy. He’ll give you a definite, concise opinion, and I think that’s what will be valuable to the people in Cleveland.”

Rogers had yet to step on the practice field when we spoke, and with the COVID-19 crisis, there’s no guarantee there will be an NFL season. Uncertainty notwithstanding, he’s ready.

“Probably the best way to put it is, I’m another set of eyes with 40 years of [coaching] experience,” Rogers said. “I think I’m going to be mentoring some of the younger guys on the staff. … I think I’ll be a sounding board for Kevin Stefanski. It remains to be seen. I think some of these positions, you get more responsibility as things unfold. … I think he trusts me.

“One thing about getting older is, you really appreciate the opportunities that you get, and I’m certainly humbled by this opportunity.”

Kevin Rogers served as the quarterbacks coach at Virginia Tech for four seasons. Under Rogers’ guidance in 2004, Bryan Randall threw for 2,264 yards and 21 touchdowns, earning him ACC player of the year honors in the Hokies’ first year in the league.

Kevin Rogers during his time with the Minnesota Vikings.

Kevin Rogers has coached at every level of football, starting as an assistant at Bayside High School in 1974 and most recently joining the Cleveland Browns. His college coaching stops included Virginia Tech, Notre Dame and his alma mater, William & Mary. 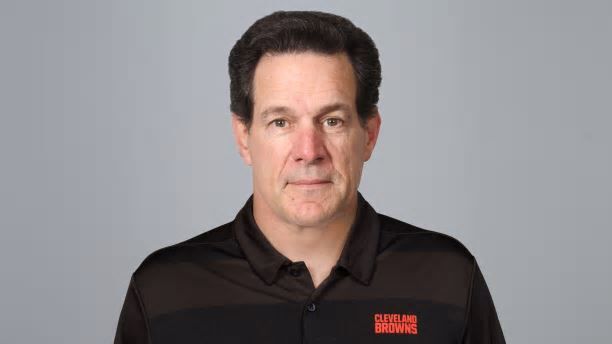 “One thing about getting older is, you really appreciate the opportunities that you get, and I’m certainly humbled by this opportunity.”

Kevin Rogers, on working with the Cleveland Browns after more than 40 years coaching