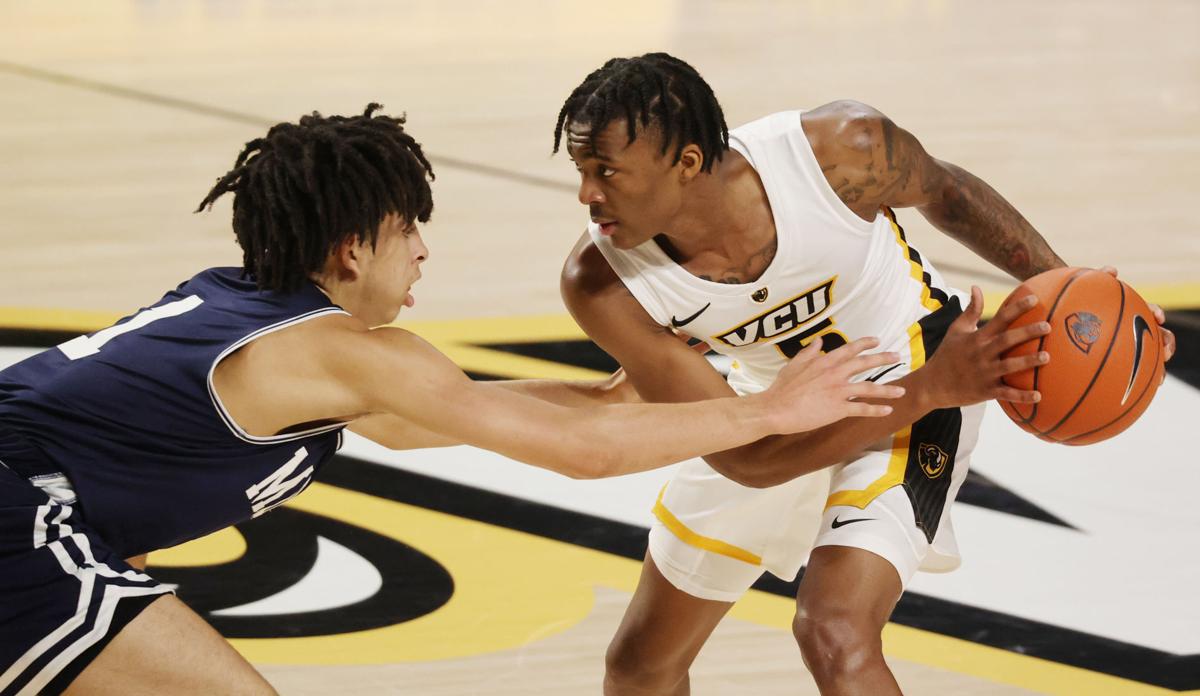 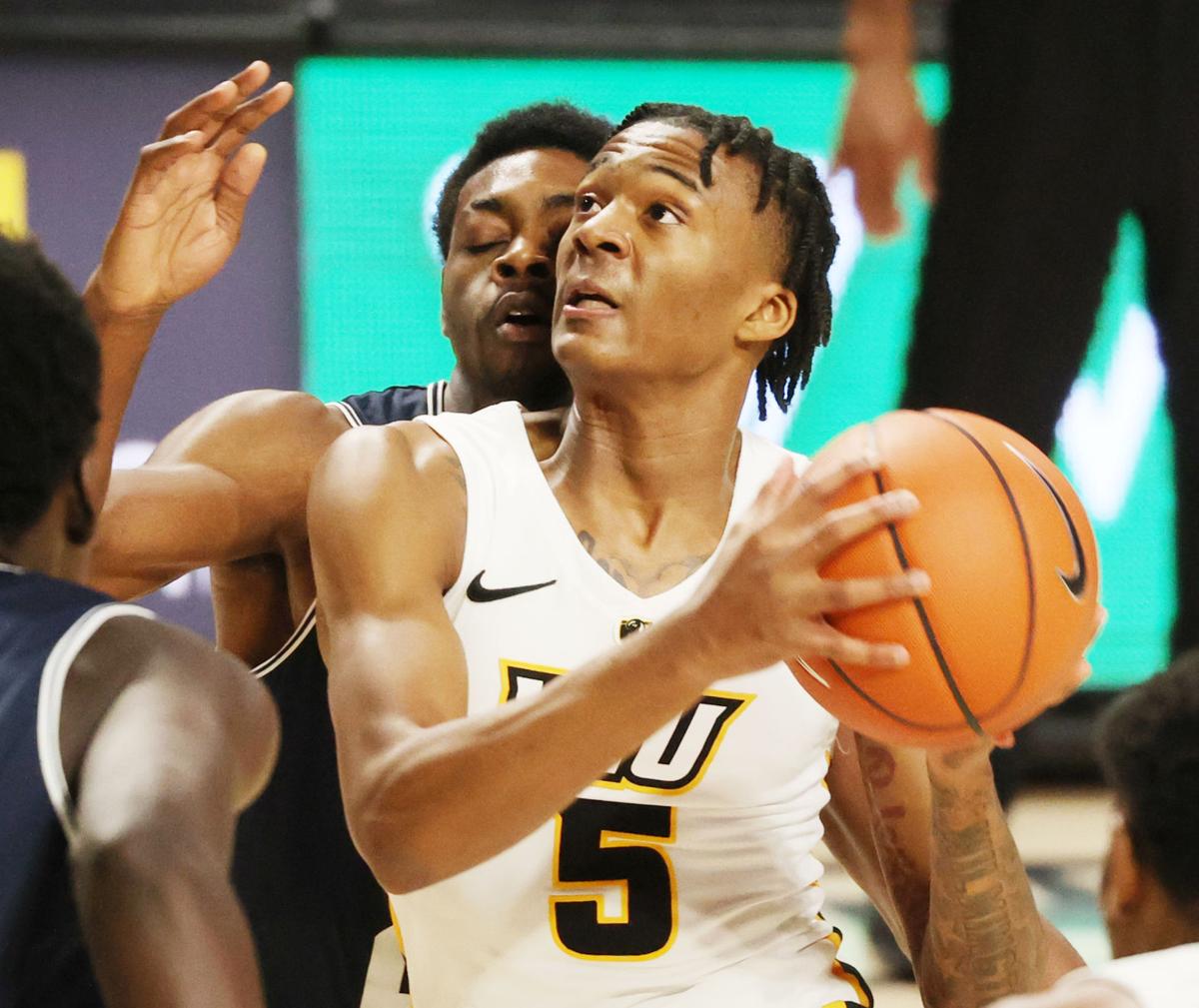 Bones Hyland found his stride as a scorer and as a defender in his sophomore season at VCU. He averaged 19.5 points and 1.9 steals, making the the lengthy guard an intriguing draft prospect at the NBA level. 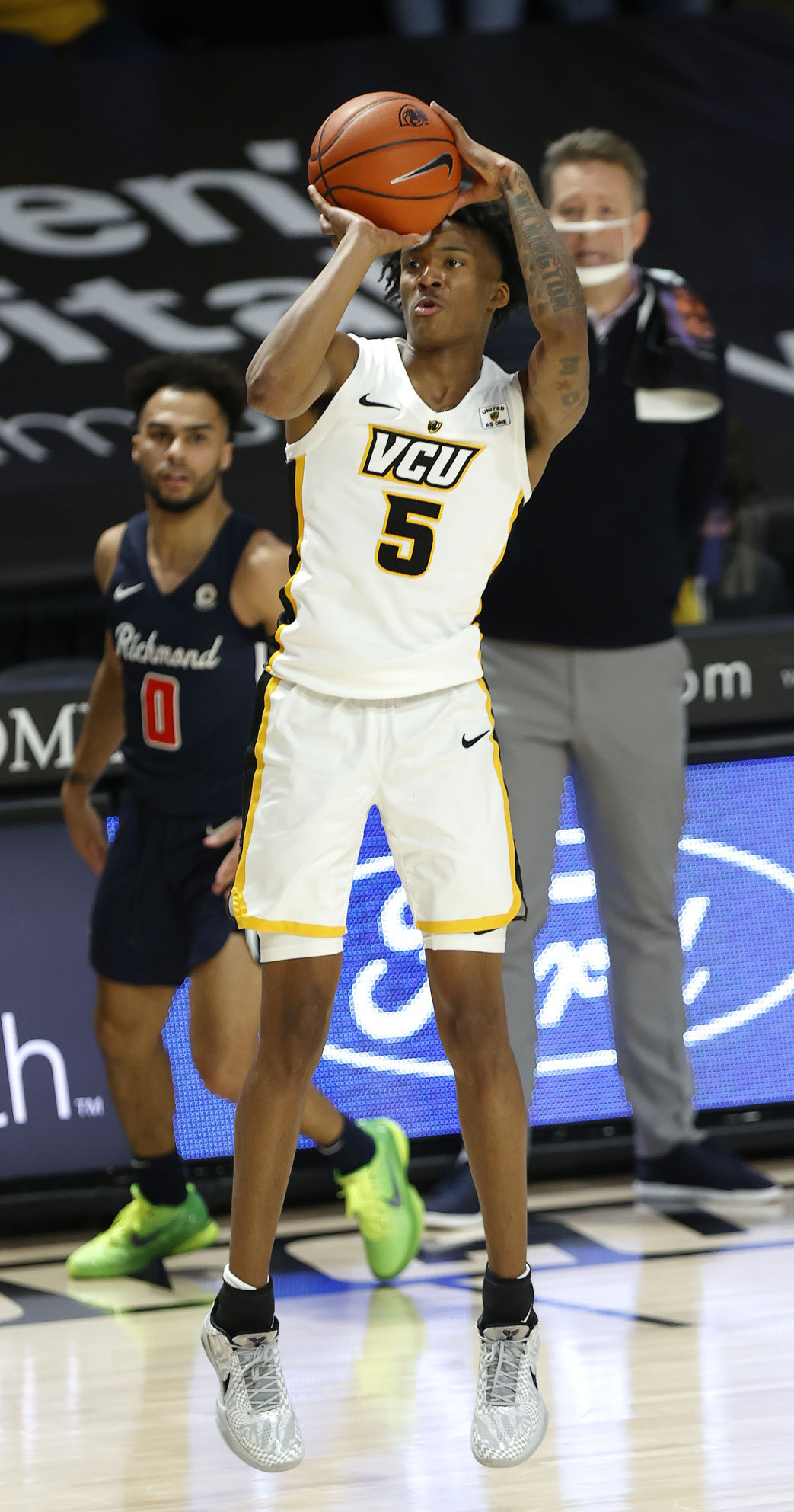 Bones Hyland is projected as high as 19th by draft experts, while others view him as a second-rounder.

For Bones Hyland, it’s hard to even describe what the feeling may be like. To be selected in the NBA draft would represent something he’s waited for and worked for his entire life.

After an electric sophomore season at VCU in 2020-21, Hyland discussed what could be next with his mother, Marshay, and with a couple of close family members.

Hyland, as a sophomore, led the Atlantic 10 with 19.5 points per game and was named the league’s player of the year while leading VCU to an NCAA tournament berth.

And, with his advanced offensive skill set, Hyland paired improved defense — his 1.9 steals per game ranked fifth in the A-10.

As Hyland and his family discussed and prayed about his future, Hyland felt as if it was time to make a leap to the next level.

“I feel as though I’m ready for it,” Hyland said Tuesday.

On April 17, Hyland made the decision public, posting to social media that he would declare for the NBA draft and hire an agent.

In the months since the Rams’ season ended, Hyland has trained intensely, readying himself for what’s ahead.

It was reported this past weekend that Hyland received an invite to the NBA Draft Combine, which will be held in Chicago June 21-27.

And, on draft day, July 29, Hyland will look to have that indescribable feeling become reality.

“It’s honestly going to hit me hard, I know it is. Just from everything I’ve been through,” Hyland said. “Just the way I handled adversity. How I took adversity head on. So I feel as though that’s going to be the best night of my life.”

VCU coach Mike Rhoades could see that Hyland’s next step was on the horizon. Many NBA teams called him to inquire about Hyland this past season, and it’s continued into the spring.

But, not the type to look two steps ahead, Hyland was focused on the season itself and not what was next.

“But my game just took over, to another level. And I took my game to another level,” Hyland said. “And it just went from there. And I just felt as though it was time for that jump for me.”

The Wilmington, Del., native returned home right after the Rams’ first-round NCAA tournament game against Oregon was canceled due to COVID-19 cases within the VCU program, and began training there.

And, as he made his final decision, talking it over with family, Hyland had the support of the VCU coaching staff as well.

“They were telling me, ‘This is a huge opportunity for you. You’re on the radar heavy. We’re supporting you on any decision that you make,’” Hyland said.

Hyland announced in early May that he signed with the Atlanta-based Next Sports Agency, represented by Newport News native Austin Walton and Michael Whitaker.

The agency helped set up a training spot for Hyland at The Skill Factory in the Atlanta area, which is where he’s been the last several weeks.

“Working on everything, honestly,” Hyland said. “It’s really everything in my game. So, I’ve been working on a lot ... trying to get way more muscular. Put on weight. And I’ve been doing that very well.”

As the draft gets closer, Walton said more than 20 teams have called him seeking to schedule workouts with Hyland. From a logistical standpoint, they’ll probably only be able to do about half of those, he said.

But Hyland will have workouts with the Utah Jazz and New York Knicks before the combine, Walton said, then about nine more afterward.

“Ultimately I think he’s a first-round pick,” Walton said of Hyland. “I think that’s where we’re going to land. But, only time will tell. We’ll know once he does the workouts. And we also have a pro day. And then also with the combine. But I think he’s really going to impress a lot of people.”

In a recent aggregate mock draft compiled by HoopsHype — which took into account mock drafts published by ESPN, NBADraft.net, CBS Sports, Bleacher Report, Yahoo, The Athletic, The Ringer, Yahoo and For The Win — Hyland was predicted to be taken early second round, No. 36 overall. The NBADraft.net mock draft had Hyland going No. 19 overall to the Knicks.

Hyland, upon selection, would be the first VCU player who wasn’t at least a junior in school to be picked in the draft. The Rams’ last pick, Larry Sanders in 2010 (No. 15 overall to the Bucks), was a junior. VCU’s previous 18 selections were seniors.

“What helps Bones is his joy for the game. His positive vibe on the court,” Rhoades said. “I mean, people take that into account. That’s really important. He’s very competitive.

“But, basketball wise, the way he shoots the basketball, the NBA has moved to spreading the court and putting so many shooters out there and shooting with range, which he definitely has.”

At the combine in a couple of weeks, Hyland said his aim is to show everything that he has to give. And the joy that Hyland plays with is something that Walton believes people will gravitate to.

“And say, ‘Hey, we need that inside our locker room,’” Walton said.

With each day of work, Hyland steps closer to a dream.

It’s something he said he can’t wait for.

“And just been grinding every day to get to that moment for sure,” he said. “And stay ready.”

Are pitchers at a bigger health risk due to MLB's foreign substance policy?

Are pitchers at a bigger health risk due to MLB's foreign substance policy?

Bones Hyland found his stride as a scorer and as a defender in his sophomore season at VCU. He averaged 19.5 points and 1.9 steals, making the the lengthy guard an intriguing draft prospect at the NBA level.

Bones Hyland is projected as high as 19th by draft experts, while others view him as a second-rounder.