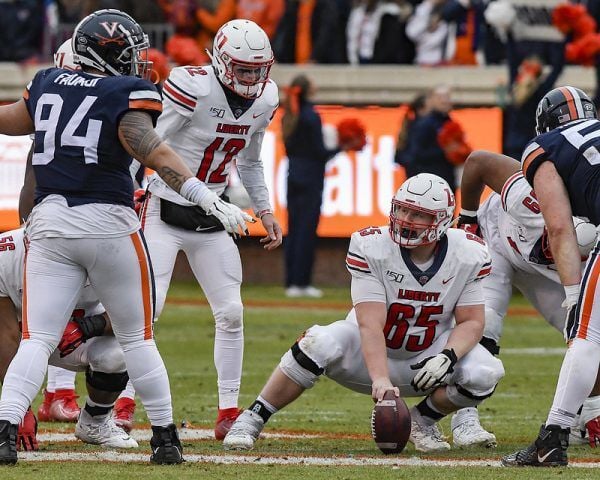 Liberty center Thomas Sargeant, speaking of Saturday's date at Syracuse, said, “we’re moving this program in a direction, and if we want to keep it moving in that direction, this is a huge opportunity for us. We’ve got to capitalize on that.”

Liberty quarterback Malik Willis (right) leads an offense with a strong ground game behind center Thomas Sargeant, who has made 40 consecutive starts for the Flames.

Liberty offensive line coach Sam Gregg said he wants his blockers “playing like a nickel, not five pennies.” This desired cohesion starts with the Flames’ center, his presnap directives and leadership, as the man in the middle of a team that’s one of the nation’s best at running the ball.

Liberty’s snapper is Atlee High graduate Thomas Sargeant, a redshirt senior who has made 40 straight starts heading into Saturday’s game at Syracuse. That’s an admirable streak for any player. It’s remarkable for one who arrived at Liberty as a walk-on.

Sargeant was 6-foot-1 and 260 pounds as an Atlee senior. Liberty, VMI and Campbell showed interest, but none extended a scholarship offer. Liberty was the first school to offer a roster spot as a nonscholarship player, and Sargeant felt comfortable on visits to LU.

He spent his first year redshirting, started as a walk-on the next year, and has started every game since.

“Coming out of high school, not getting the [recruitment] that I wanted was definitely a motivating factor,” he said.

Though he arrived at LU without a scholarship, Sargeant very much wanted to leave having earned one. He said he focused on his playbook, and made the most of each practice opportunity, though there weren’t many early in his career.

“If you don’t know what you’re doing, the coaches aren’t going to put you out there,” Sargeant said. “That was one of the ways I caught the [coaches’] attention. I picked up the offense pretty quick.”

Sargeant’s first start was the Flames’ opening game of 2017, at Baylor, before 45,784 fans. Liberty won 48-45, a confidence-booster shot for a program in its final season as an FCS member on the way to FBS, and for the redshirt freshman walk-on center.

Sargeant felt satisfaction after earning the scholarship in December of 2017, but there was more to it. He evaded many of the student loans that were headed his way.

“I definitely didn’t want to be a financial burden on my parents,” Sargeant said. “That was another motivating factor to earn that scholarship and tell them, ‘Hey, you don’t have to worry about me. I’m going to take care of myself.’”

“Everything we do is about, in Year 2, trying to advance our program,” said second-year LU coach Hugh Freeze, Mississippi’s coach from 2012 to 2016. “What better opportunity do you have than to go play an ACC team on the road, and hopefully be in the game and have a chance to compete to win it?”

While the Orange are struggling and expected to miss key starters because of injuries, Syracuse is an ACC member that handled LU 24-0 in Lynchburg to begin last season.

“We’ve got to capitalize on that.”

Liberty ranks seventh in the FBS with 250.8 yards rushing per game behind the running of redshirt junior quarterback Malik Willis, a transfer from Auburn who sat out last season. Willis, a 6-1 215-pounder from Atlanta, leads FBS quarterbacks in rushing with 113.3 yards per game.

LU, an FBS independent, will get two other shots at ACC teams later in the season, with games at Virginia Tech (Nov. 7) and N.C. State (Nov. 21). Liberty is 0-8 all time vs. ACC opponents.

Liberty center Thomas Sargeant, speaking of Saturday's date at Syracuse, said, “we’re moving this program in a direction, and if we want to keep it moving in that direction, this is a huge opportunity for us. We’ve got to capitalize on that.”

Liberty quarterback Malik Willis (right) leads an offense with a strong ground game behind center Thomas Sargeant, who has made 40 consecutive starts for the Flames. 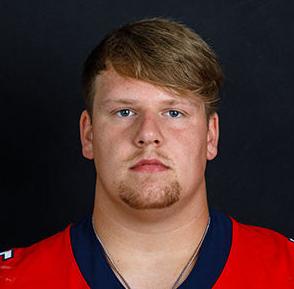 Thomas Sargeant, a walk-on from Atlee, earned a scholarship as Liberty’s center.