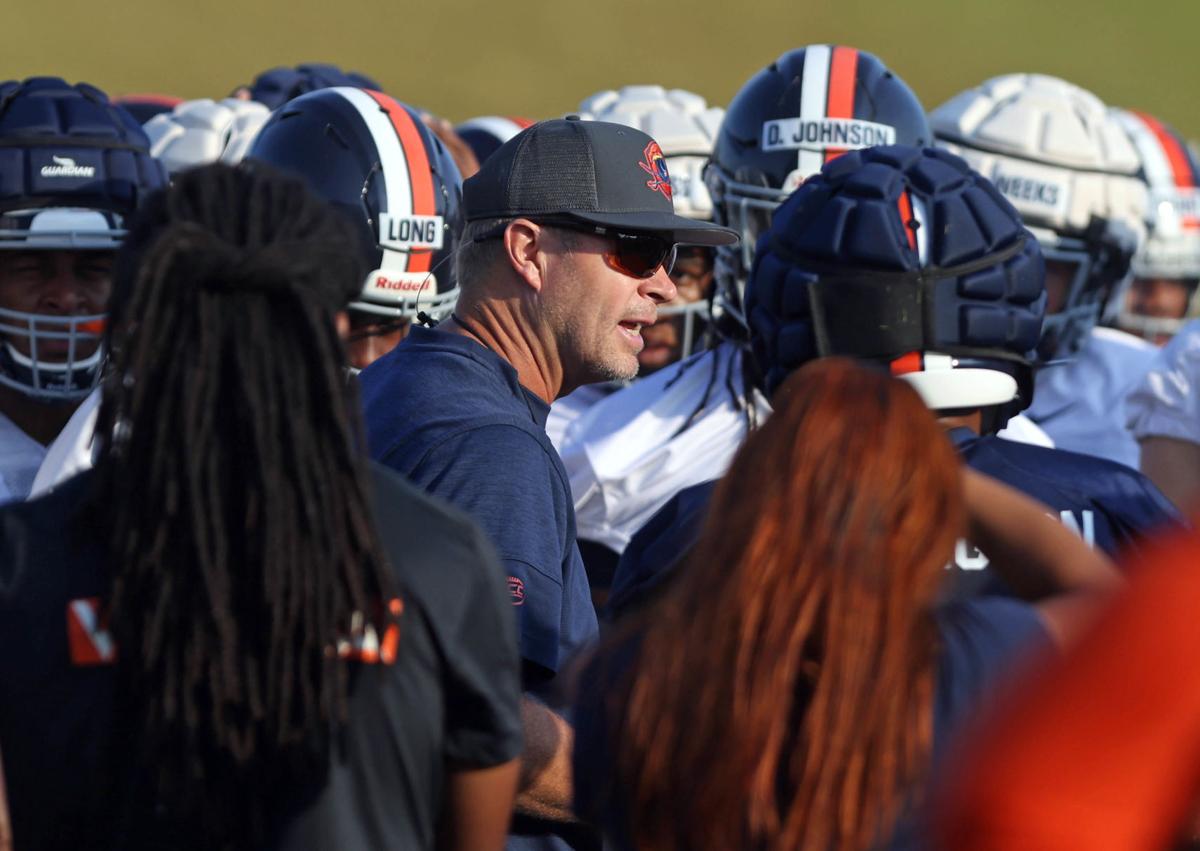 Virginia football coach Bronco Mendenhall talks with his team during the first practice of fall camp. 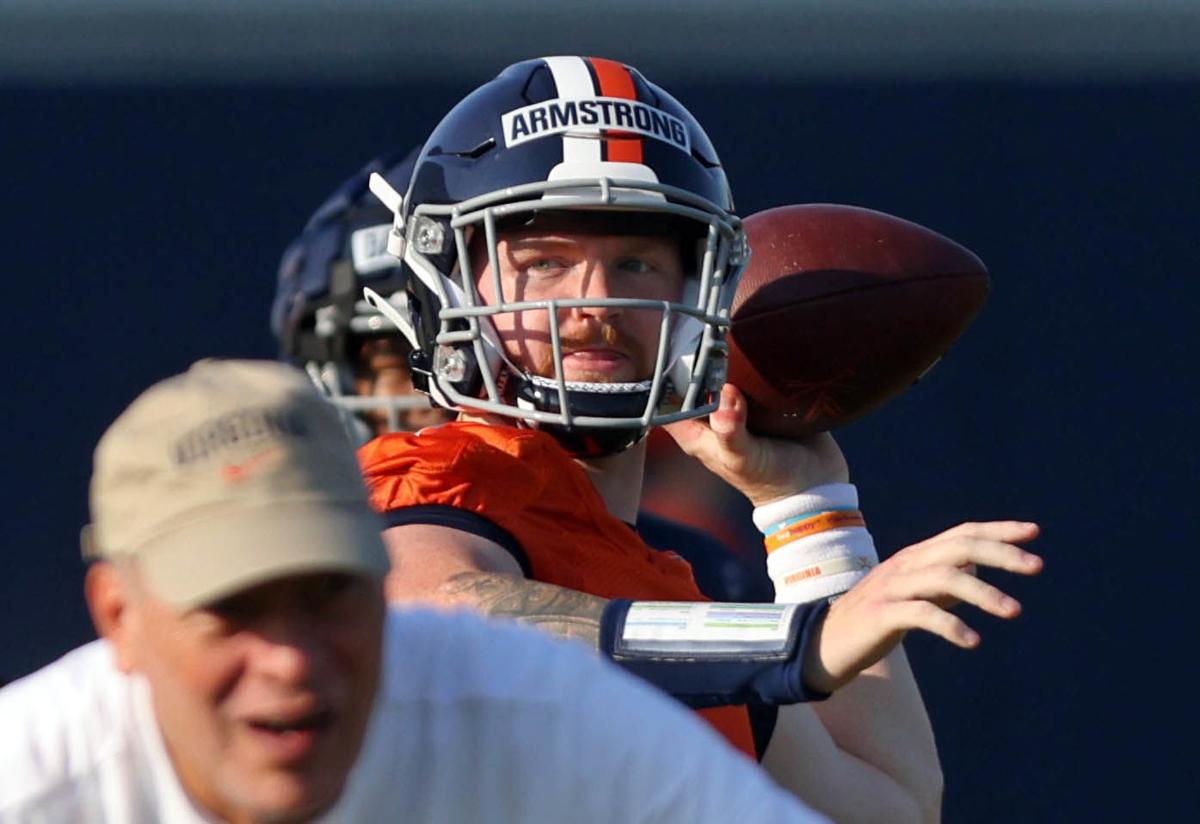 Virginia quarterback Brennan Armstrong throws a pass during an early morning practice Friday at the University of Virginia.

CHARLOTTESVILLE — Virginia’s football team hadn’t been on the field for 10 minutes when coach Bronco Mendenhall could be heard loudly and vigorously chastising an assistant coach who had mixed up the order of drill periods during Friday’s opening practice.

“Listen to what I said,” the normally cussword-averse Mendenhall bellowed as the field goal unit lined up for a try. “Get your (stuff) together.”

It was a fairly unimportant moment that symbolized a hugely important facet of this year’s fall camp. Mendenhall is back to focusing on football, a year removed from a season when much of his time and energy was spent on COVID-19 protocols and contingencies.

“It’s nice to talk without a mask on,” Mendenhall said following the morning workout. “It’s nice to get a team prepared without COVID protocols being front and center and the very first thing I consider every day. It’s nice to have a regular amount of time to focus on football.”

A year ago, much of Mendenhall’s planning time was spent on how best to space out drills and how to cut down on close contact that could potentially have spread the virus. Once practice began, he spent much of his time policing protocols, making sure masks stayed on and players didn’t congregate too closely.

UVA’s plan worked, as it didn’t miss a game due to a COVID outbreak within its program. But the added layers of non-football work for Mendenhall limited his team’s on-field progress. The Cavaliers went 5-5 and opted out of playing a bowl game.

Now, with a veteran roster and a university-wide vaccine mandate, Mendenhall and his players go into August focused on football.

“We had a lot of restrictions last year at this time,” said senior running back Wayne Taulapapa. “It was specifically because Coach Bronco wanted to keep us safe. I think we did a great job of that. But we weren’t able to grasp concepts as well as we do now, because it’s a lot more contact and being able to be in the same situations we have every year. The process is speeding up a lot quicker and it’s a lot easier for guys to grasp concepts and things like that.”

Virginia returns 18 starters from last year’s team, including most of its offensive line and defensive backfield. In all, with the NCAA not counting last season against player eligibility, UVA has 22 seniors on the roster, including Taulapapa and center Olu Oluwatimi.

After Friday’s practice, Oluwatimi said the players are glad to be done with wearing masks in drills, a change that is helping push the pace in practice.

“Not masking and not having a full face visor helps with breathing and overheating,” he said. “We’re able to get more work in.”

Perhaps most significantly for the players, there isn’t the looming sense of uncertainty that clouded all over college football last season. UVA had its season-opening opponent change four times going into 2020.

Its highly-anticipated neutral site game against Georgia in Atlanta was canceled due to the pandemic. Its new opener, against VMI, was called off when the Keydets opted not to play football until the spring. Then its third opener, against rival Virginia Tech, was postponed following an outbreak in the Hokies’ program.

Virginia finally opened the season with a 38-20 home win over Duke on Sept. 26.

“You never really knew what was going to happen in the upcoming weeks,” said Taulapapa. “When it came to a game, maybe the players were going to change because maybe some guy got sick. Right now, it’s easier for us to focus on what’s really important.”

This year, UVA kicks off the season Sept. 4 at home against FCS William & Mary. It’s a game the players said they’re happy to know will be played on that date against that opponent. Like normal. That was the vibe throughout Friday’s practice.

“There currently isn’t the extra COVID cloud of protocols,” said Mendenhall. “It felt much more like normal. It’s been a long time.”

Virginia football coach Bronco Mendenhall talks with his team during the first practice of fall camp.

Virginia quarterback Brennan Armstrong throws a pass during an early morning practice Friday at the University of Virginia.