Subscribe
Read Today's E-Edition
Share This
Barber: After debuting with a 34-17 win over Richmond, Tony Elliott says team still must learn to 'finish'
0 Comments
Share this
Presented By 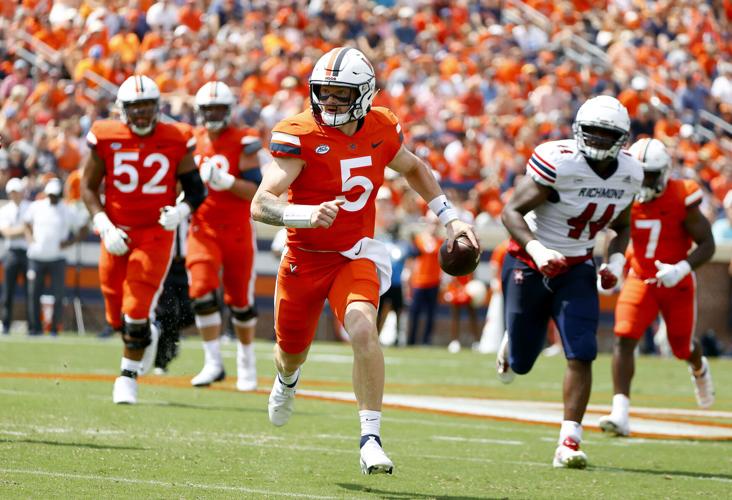 First-year Virginia coach Tony Elliott watched his team score 28 points in the first half but just 6 in the second. 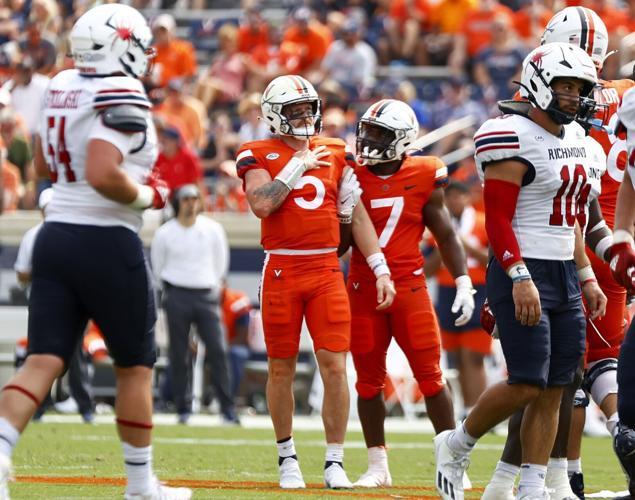 UVa running back Mike Hollins (7) checked on QB Brennan Armstrong during the second half of Saturday’s win. The QB had a huge day but said he and the Cavaliers “have to learn to finish and be a mature team when we’re up.”

As he works to build what he refers to as “the model college football program” at Virginia, first-year head coach Tony Elliott frequently refers back to the way he saw things done during his decade-plus as an assistant at Clemson.

One hallmark of the Tigers during that time? They hammered FCS opponents.

Elliott’s new team has some work to do in that area, but for starters, it got the job done.

“We didn’t finish,” said quarterback Brennan Armstrong after UVa’s season-opening 34-17 win over Richmond on Saturday at Scott Stadium. “Especially against that team. Not taking anything away from them, but I felt like we left a lot on the table out there.”

After a dominant first half, UVa (1-0) struggled in the second, turning the ball over and allowing visiting Richmond to make Elliott sweat out his debut a bit, ultimately downing the Spiders 34-17 in front of an announced crowd of 41,122 at Scott Stadium.

Virginia built a 28-10 halftime lead, then saw Richmond pull within 28-17 early in the third quarter.

“We have to finish,” said Elliott. “We were going to find out the maturity level and the makeup of this team in the second half. And I felt like the guys were excited about the success, were focusing on the first half and didn’t finish the second half.”

Virginia lost a fumble, threw an interception, and committed six penalties, including one — an illegal substitution flag — that wiped out a Josh Ahern interception in the third quarter. That helped keep things close against the Spiders (0-1), forcing the Cavaliers to leave their starters in the game until late in the fourth quarter.

“Was hoping that the guys were going to come out at the half, we got the ball and take care of business,” said Elliott. “Maybe if we would have scored a couple more times, be able to play some guys, get them some in game experience.

“But unfortunately, the game was tight there toward the end until we finished it off.”

The turnovers, penalties and substitution issues put a blemish on the finish, but Elliott’s debut game as the Cavaliers’ field boss still had plenty for the new regime to be encouraged by.

Armstrong threw for 246 yards and two touchdowns and ran for 105 and a score, recapturing his knack for explosive plays. He threw a 56-yard touchdown pass to Lavel Davis Jr. to tie the game at 7-7 with 5:56 left in the first quarter, and he broke off a 64-yard run to the end zone to put UVa up 21-7 two minutes into the second.

Virginia achieved the balance Elliott and new offensive coordinator Des Kitchings are striving for, piling up 259 yards on the ground and averaging 6.2 yards per rush.

Perris Jones, the unlikely winner of the competition for the starting running back job, backed up his strong camp performance by running for 104 yards and touchdown on 19 carries, and catching two passes for 14 yards and one score.

Defensively, the Cavaliers still have plenty to improve on. Richmond scored touchdowns on both its red-zone trips and averaged a robust 4.9 yards per rush. But coordinator John Rudzinski’s unit held the Spiders to just 5 for 14 on third down conversions, making a pair of key stops in the third quarter to help UVa regain control of the game.

“In fairness to the defense, they got put in some tough situations in that second half. We had back-to-back sudden changes in unfavorable field position.”

On the play where Ahern — who was suspended for the first half due to a targeting ejection in last season’s final game against Virginia Tech — intercepted a pass that the substitution penalty wiped out, Elliott blamed himself, noting he could tell there was an issue and should have called a timeout.

As for Armstrong’s play, there wasn’t much to criticize on a day he became the school’s all-time leader in total offense. Elliott and Kitchings said on a few of his runs — especially the scrambles on broken plays — they would have preferred to see him slide and not take hits.

But Armstrong explained himself, Elliott said.

“‘Nah, coach, we weren’t playing to the standard so I had to do it,’” Elliott said his quarterback told him. “You just love everything about what his DNA is.”

That DNA meant Armstrong went into Saturday aiming for type of score Elliott’s Clemson teams put up against FCS foes — and felt less than satisfied by the 17-point win.

“We just have to learn to finish and be a mature team when we’re up,” he said.

UVA, Va. Tech get opposite results in openers | Teel and Barber podcast

First-year Virginia coach Tony Elliott watched his team score 28 points in the first half but just 6 in the second.

UVa running back Mike Hollins (7) checked on QB Brennan Armstrong during the second half of Saturday’s win. The QB had a huge day but said he and the Cavaliers “have to learn to finish and be a mature team when we’re up.”