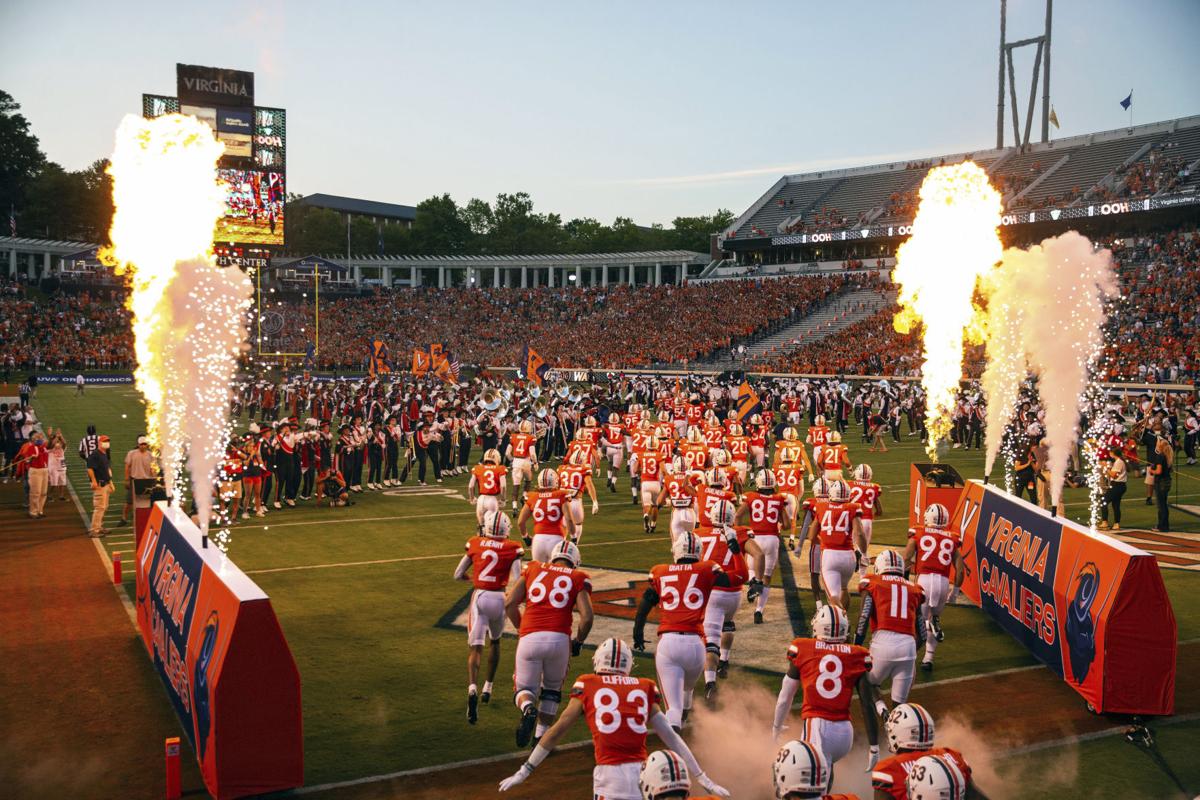 Virginia players ran onto the field before Saturday evening’s game against William & Mary at Scott Stadium in Charlottesville. After a slow start, the Cavaliers rolled a 43-0 season-opening victory. 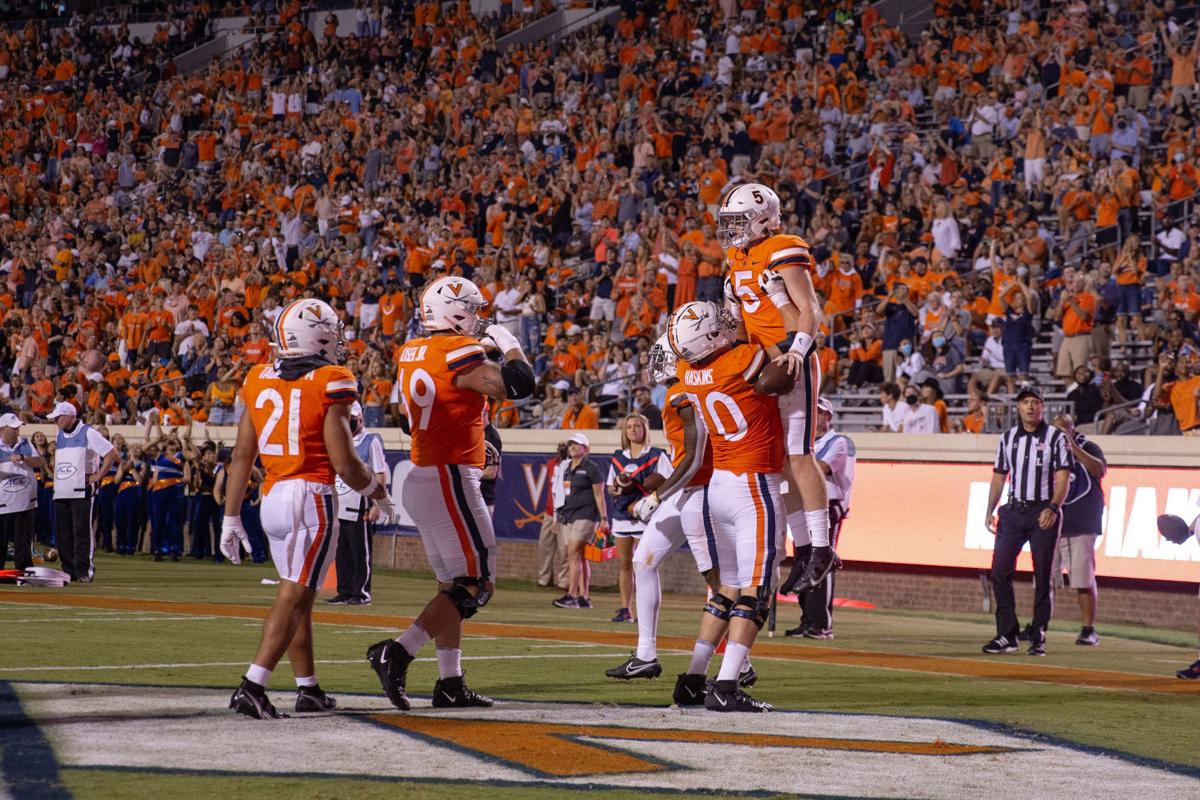 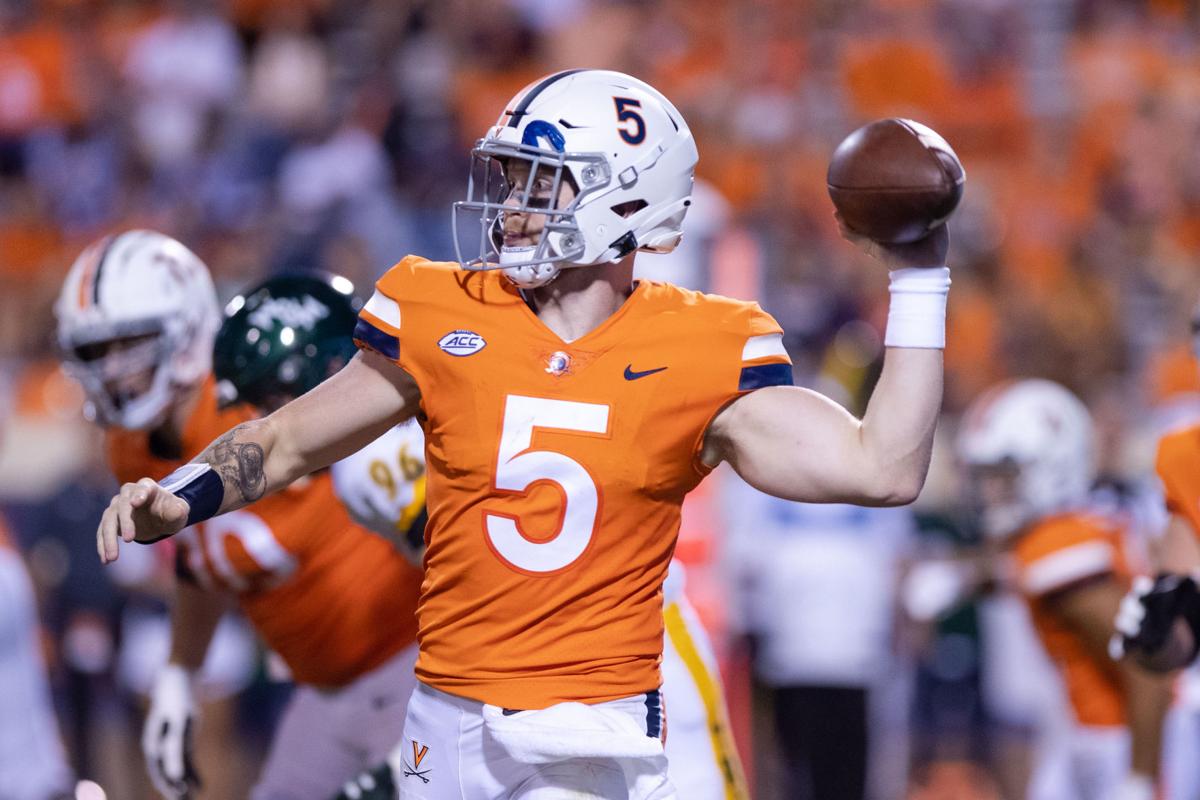 Virginia quarterback Brennan Armstrong throws a pass during a game against William & Mary on Saturday at Scott Stadium. 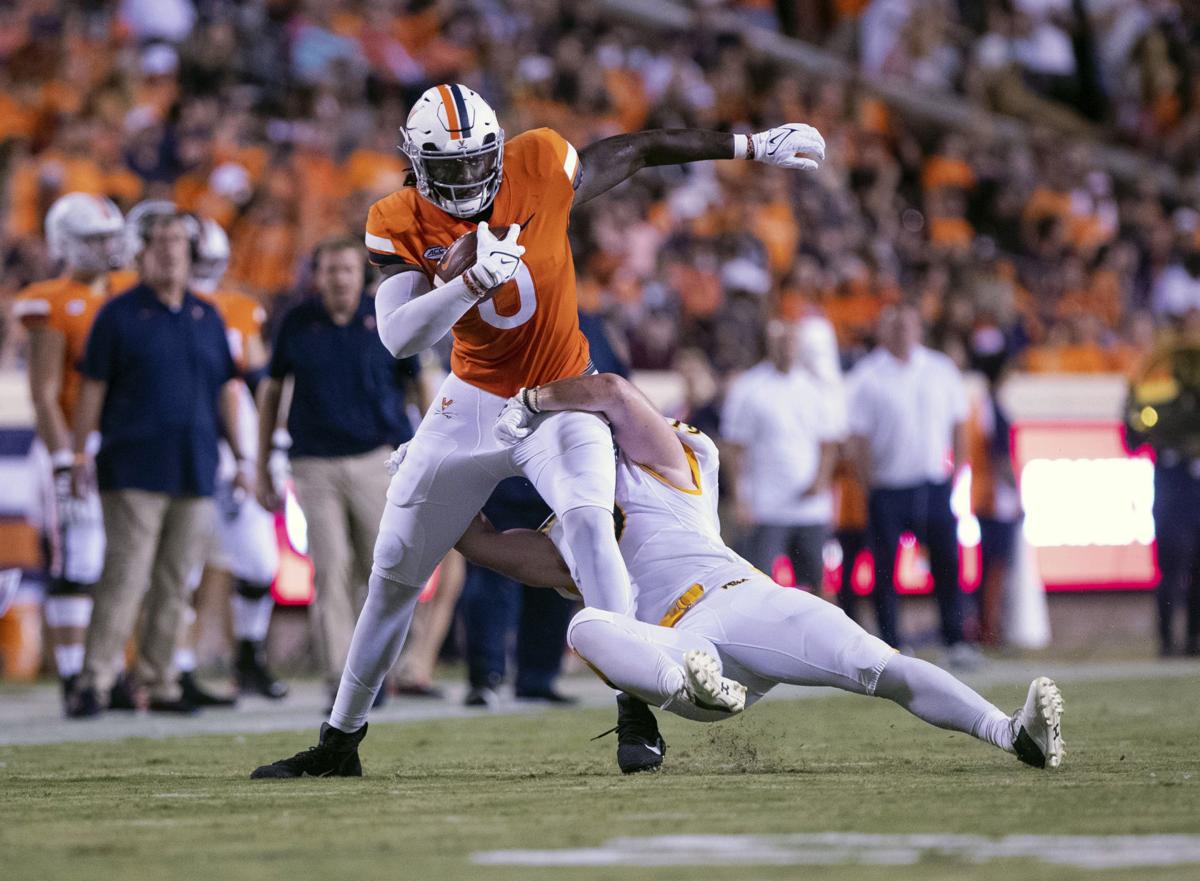 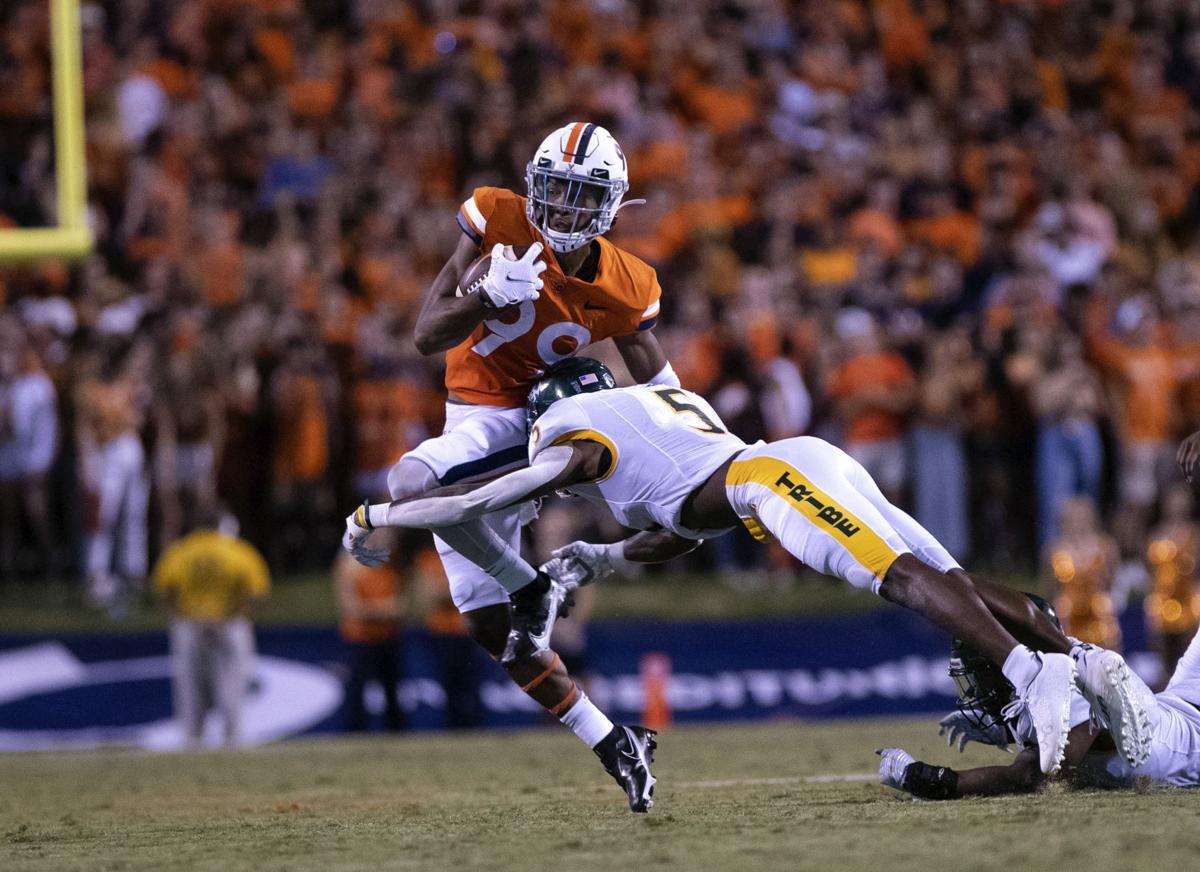 So when Wicks ran past a William & Mary cornerback on the same play Saturday night in the UVA football season opener, Armstrong made sure he didn’t make the same mistake.

“This time I was like, ‘I’m going to throw this son of a gun out there,’” Armstrong said. “And yeah, I just overthrew him. That one hurts.”

On a night when Armstrong threw for 339 yards and two touchdowns — and ran for two more scores — in leading Virginia to a 43-0 win over the FCS Tribe, much of his postgame press conference was spent nitpicking areas of the offense that still need work.

There was the slow start, with UVA scoring just 3 points on its first four possessions. There was a pair of failed fourth-down conversions, squandered field position and, of course, the overthrow in the first quarter that would have been a touchdown for Wicks.

“I think the first half, I was trying to push the tempo,” Armstrong said. “I was just moving a little too fast. … Once we got to the second half, I wasn’t pleased with what happened in the first half, so I just tried to slow things down.”

Virginia’s offense may have all the pieces to be wildly productive and wildly entertaining this year, but when the curtain went up on the first half of opening night, its performance looked at times like a ragged dress rehearsal.

After talking up its traditional run game all offseason, UVA didn’t hand the ball to a running back until its third possession.

Virginia was stopped twice on fourth down, both times on gadget plays involving backup quarterbacks running the ball.

Much-hyped transfer tight end Jelani Woods didn’t see a pass his way until the second quarter, then left the game with an undisclosed injury.

Still, by game’s end, Virginia had amassed 545 total yards and five touchdowns, more than enough on a night when the defense was locked in, recording the program’s first shutout since a 28-0 win over South Carolina in the 2018 Belk Bowl and first scoreless opener since blanking Duke 27-0 in 2003.

And no, the expectations for the Cavaliers’ offense aren’t equal to those of Clemson or North Carolina, two other ACC teams whose opening night offensive performances were downright offensive. The final score, total yardage and the lack of turnovers all signaled great success for UVA.

Perhaps the most puzzling deficiency was Virginia’s inability — or more accurately, reluctance — to establish the traditional running game, especially in the first half. The Cavaliers ran the ball 17 times — spread over six players — in the first two quarters. Just five of those carries went to running backs.

But Mendenhall said that lack of running back production was by design.

“We knew that there would be times through the entire game to kind of build into that, but that wasn’t our first emphasis today,” he said, after winning his fifth straight season opener. “Just because I target something to say, ‘Yeah, we need more of that,’ different games, different circumstances, and especially an opener, that really wasn’t the focus.”

Mendenhall said he was more focused on getting Armstrong repetitions in the passing game — mission accomplished — and that was part of the reason he left the quarterback, arguably Virginia’s most irreplaceable player this season — in the game for one final drive in the fourth quarter.

Armstrong went 4 for 4 for 59 yards passing on that possession, leading the Cavaliers to a touchdown on a 9-yard run by Ronnie Walker Jr.

“The last drive that Brennan was in, that was a glimpse to me of what I’m hopeful to see more of,” Mendenhall said.

If the verdict is out on how much progress UVA has made with that running game, the jury doesn’t have long to deliberate. The Cavaliers face a considerable elevation in opponent when they host Illinois in Week 2.

That’s part of the reason Armstrong walked off the field focused more on areas of improvement than aspects of the offense that deserved praise Saturday night.

His critical assessment wasn’t false humility. It was a measure of how far this program has come in six seasons under Mendenhall, and how far it has to go. Mendenhall’s debut game as the Cavaliers’ big whistle came in 2016 with a home loss to FCS Richmond.

After the game, Mendenhall criticized his team’s lack of passion and energy on the sidelines.

Saturday, leading 29-0 at the start of the fourth quarter, Virginia’s players were gathered as a team on the sideline during a timeout, dancing and bouncing to the stadium music.

Virginia players ran onto the field before Saturday evening’s game against William & Mary at Scott Stadium in Charlottesville. After a slow start, the Cavaliers rolled a 43-0 season-opening victory.

Virginia quarterback Brennan Armstrong throws a pass during a game against William & Mary on Saturday at Scott Stadium. 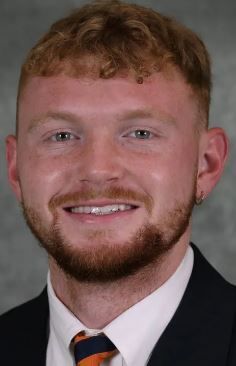