Barber: Something comforting about the familiar sting of watching your team lose in March
0 Comments
Share this
1 of 3 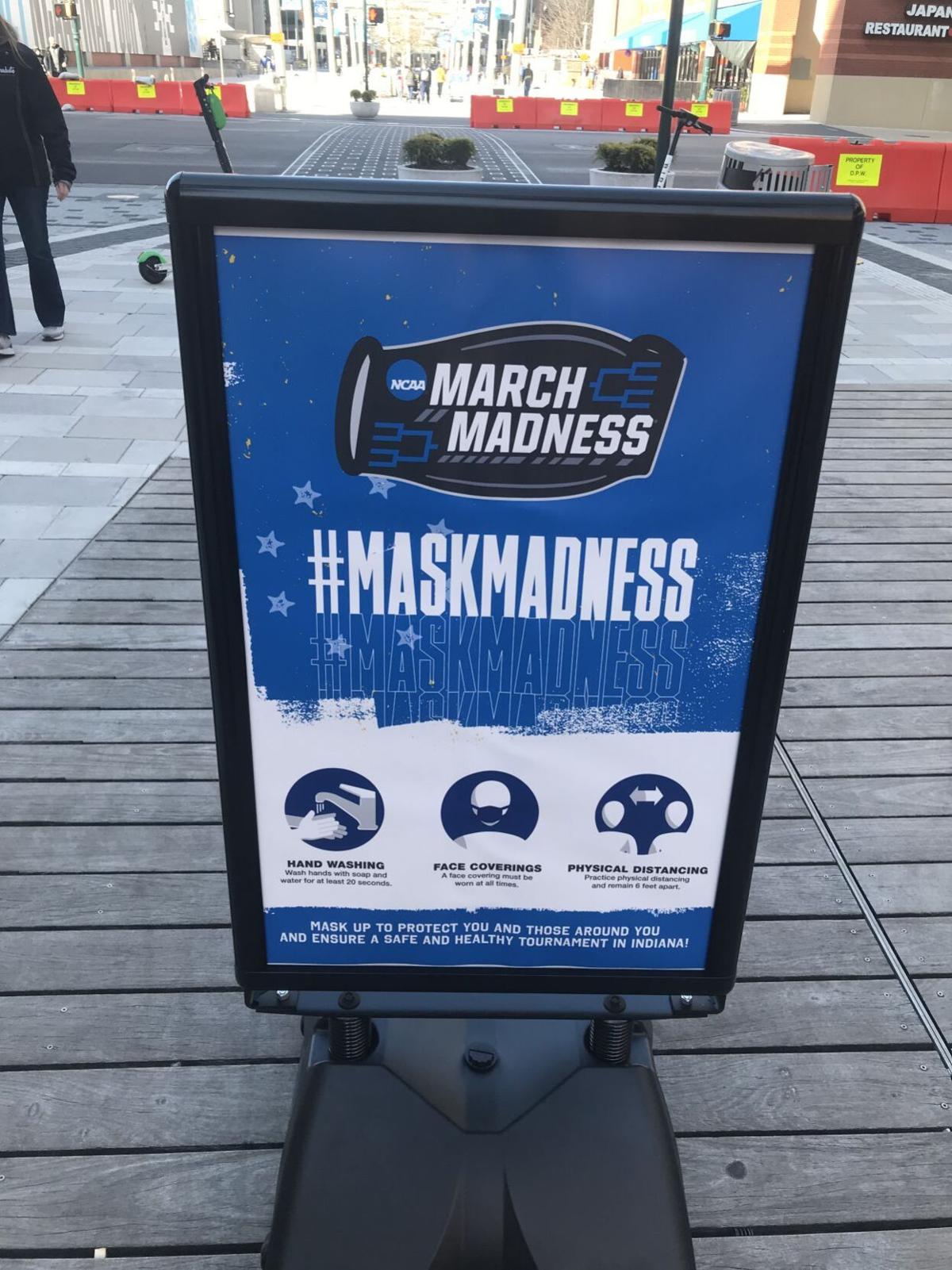 A sign in downtown Indianapolis reminds patrons to mask up this March. 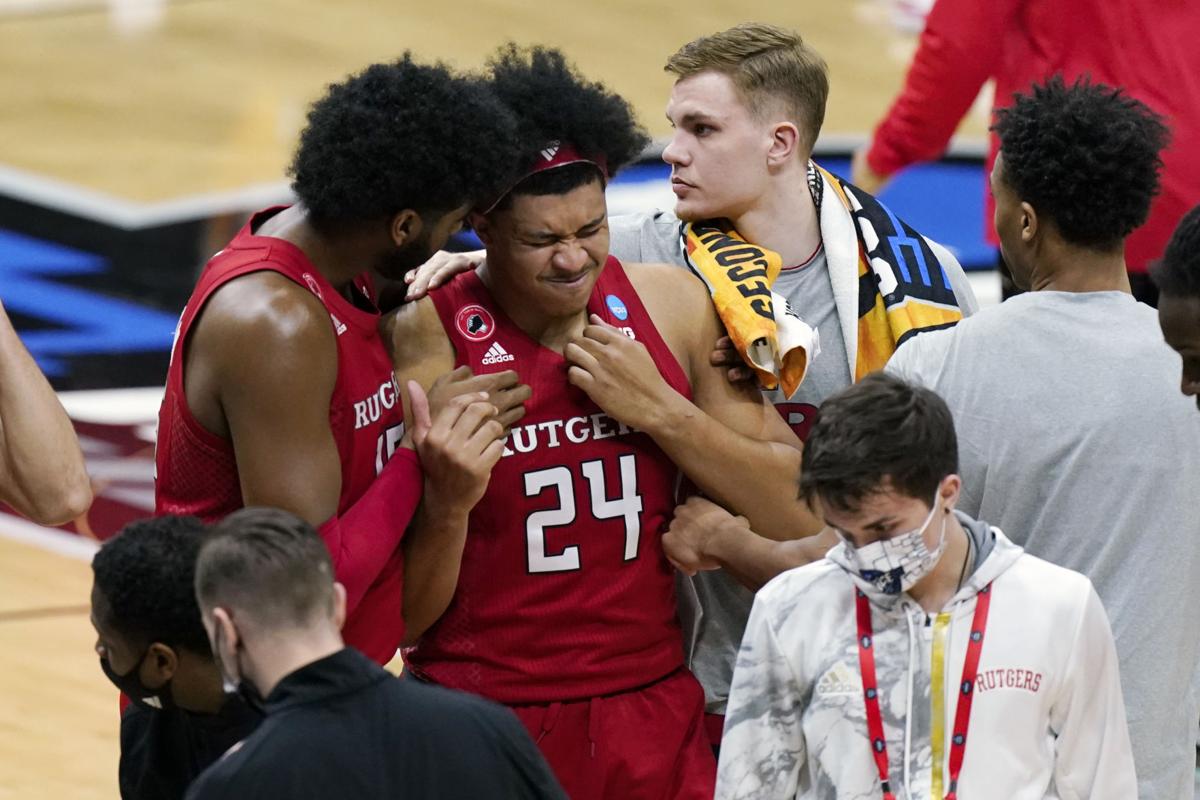 Rutgers’ Ron Harper Jr. felt the pain of the Scarlet Knights’ loss to Houston on Sunday night in the second round of the NCAA tournament in Indianapolis. 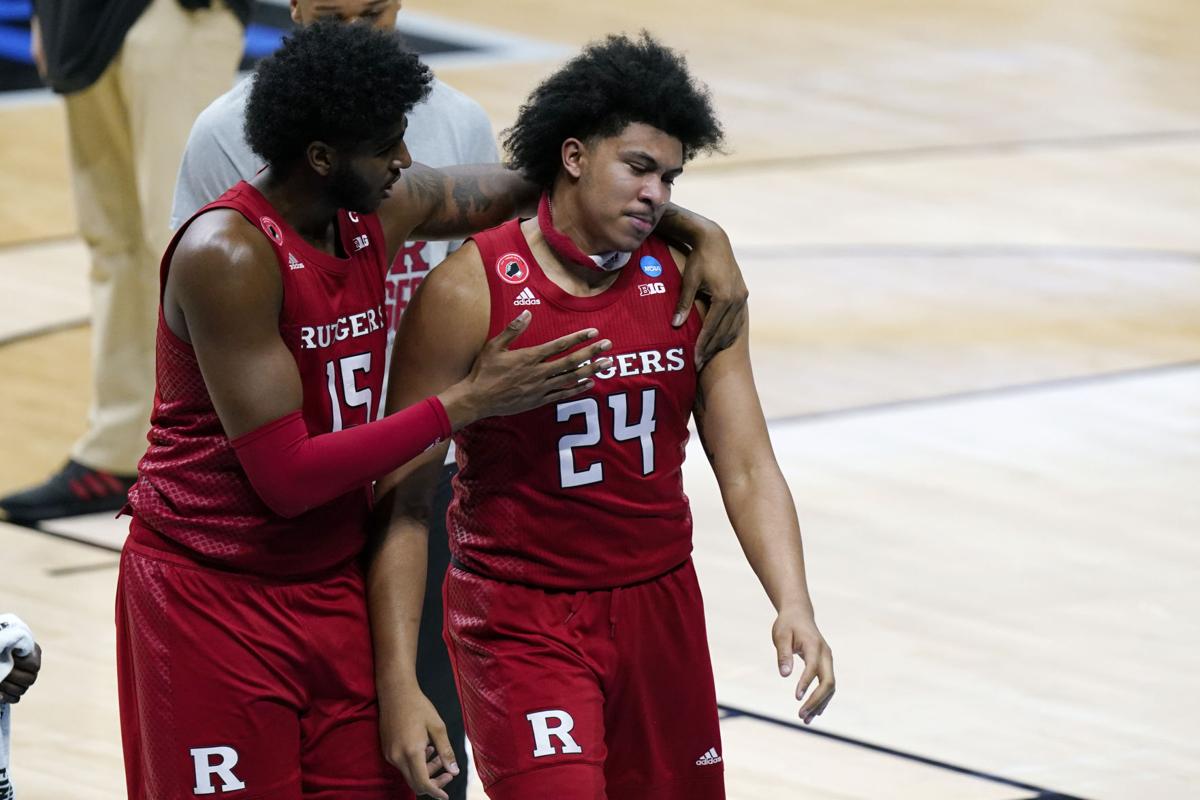 Rutgers’ Myles Johnson (15) and Ron Harper Jr. (24) leave the court following their loss to Houston in a college basketball game in the second round of the NCAA tournament at Lucas Oil Stadium in Indianapolis Sunday, March 21, 2021. Houston won 63-60. (AP Photo/Mark Humphrey)

The pain is the same.

In an NCAA tournament unlike any before it, with limited crowds, socially distanced team benches, and faces covered in masks, during a year where nothing felt normal, the sting of watching your team lose in March felt so familiar, it was uncomfortably comforting.

That was my takeaway as I sat and watched my alma mater, Rutgers University, fall 63-60 to No. 2 seed Houston at Lucas Oil Stadium in Sunday’s second round of the Big Dance.

While I’ve been fortunate enough to be a fixture at the NCAA tournament for the past seven years, courtesy of my job, Rutgers hadn’t been part of college basketball’s main event since 1991.

Maybe that’s why, on the short walk from my hotel to Lucas Oil, I encountered crowds of fans wearing my alma mater’s familiar scarlet, people who had made the trip from New Jersey, amid a pandemic, to be at the tournament.

Under an overpass, where Meridian Avenue meets South Street, just a few blocks from Lucas Oil Stadium, a small army of red-clad basketball fans began a chant that took me back two decades.

It’s been two decades since I graduated from Rutgers University, the state university of New Jersey. During my four years on the banks of the Raritan River, the Scarlet Knights’ basketball seasons ended in the Big East tournament, if not sooner. My senior year, Rutgers didn’t even qualify for its league tournament.

That’s why it was so easy for me to get sucked back in by the promise of a Cinderella run, even in such unfairy tale times.

Cavernous Lucas Oil, home to the NFL’s Indianapolis Colts and, on this night, split in half by a large black curtain, didn’t offer the same atmosphere as RU’s beloved RAC, a venue intimate to the home team and intimidating to visitors.

But a crowd of about 2,000 Scarlet Knights faithful made it feel like central Jersey in central Indiana on Sunday night.

A year removed from having no Big Dance, if the NCAA’s goal is to put on a normal tournament, then it has undertaken a fool’s errand. We were reminded of that Saturday when VCU was knocked out of the event because of a COVID-19 outbreak hours before Virginia was eliminated by Ohio, a day after ending its own coronavirus pause.

Normality was beyond a No. 16 seed. It never had a chance.

But if the aim was to create an environment suitable for cultivating a few glimpses of what March Madness was before it gave way to masked madness, then the much-maligned governing body of college athletics deserves some praise for its success.

Look no further than Nahiem Alleyne’s 3-pointer in the final seconds of Virginia Tech’s first-round game Friday, the prayer of a stroke that sent the contest against Florida to overtime.

Just point to the multiple video board cutaways at Assembly Hall on Saturday showing Dean Vander Plas, a college teammate of UVA coach Tony Bennett, pumping his fist and cheering on his son’s Ohio team as the Bobcats sent Bennett’s bunch packing.

See No. 15 seed Oral Roberts reaching the Sweet 16, where it’s already been joined by No. 12 seed Oregon State and No. 11 seed Syracuse.

They’re quintessential March moments, and we’re only in the second round.

Add to the list No. 10 seed Rutgers finding a way to lose a game it appeared to have won, a game it led by 10 points midway through the second half only to see Houston finish things off on a 14-2 run.

That’s what March is, as UVA’s Sam Hauser said earlier this month.

That’s why, after opining on the exhausting challenges of playing through the pandemic this season, Rutgers coach Steve Pikiell dismissed my suggestion that, even though the loss was crushing, there might be a measure of relief in being done with this trying year.

“No. I mean, I love this group. I wanted to coach them forever,” he said. “There’s no relief.”

His star player, moments removed from a gut-wrenching loss that likely was the final game of his college career, agreed.

“There’s tough times during the season where you may have that thought for a second, whether it’s you’re isolating, you’re away from your family, or even just a hard day on the court,” senior guard Geo Baker said. “But at the end of the day, we all play this game because we love it, we love to compete. March Madness only intensifies that, only makes you want it even more. I don’t think there’s any relief for anyone. You always just wish you could just keep playing.”

A sign in downtown Indianapolis reminds patrons to mask up this March.

Rutgers’ Ron Harper Jr. felt the pain of the Scarlet Knights’ loss to Houston on Sunday night in the second round of the NCAA tournament in Indianapolis.

Rutgers’ Myles Johnson (15) and Ron Harper Jr. (24) leave the court following their loss to Houston in a college basketball game in the second round of the NCAA tournament at Lucas Oil Stadium in Indianapolis Sunday, March 21, 2021. Houston won 63-60. (AP Photo/Mark Humphrey)