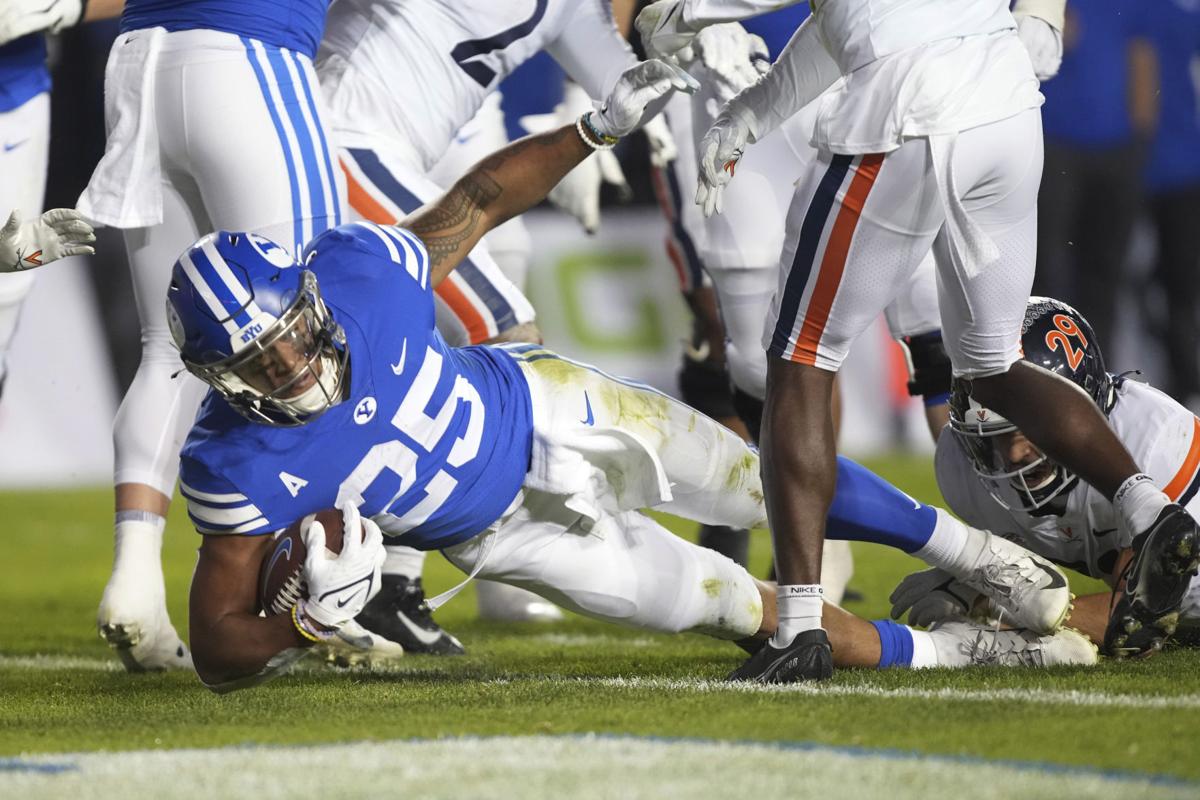 BYU RB Tyler Allgeier dove into the end zone for one of his five TDs in Saturday’s 66-49 win over UVA in Provo, Utah. He ran for 266 yards, and BYU’s offense totaled 734. 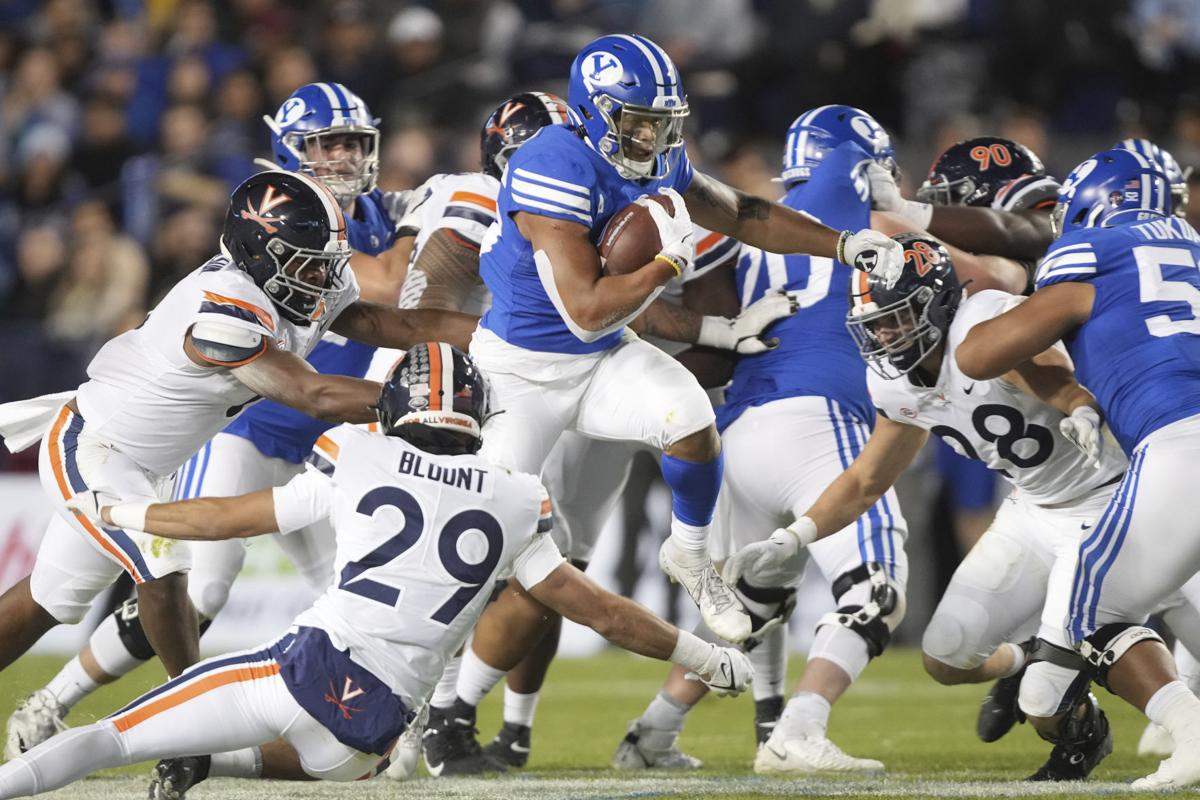 BYU running back Tyler Allgeier (25) runs the ball as several Virginia players try to tackle him during the first half of an NCAA college football game Saturday, Oct. 30, 2021, in Provo, Utah. (AP Photo/George Frey) 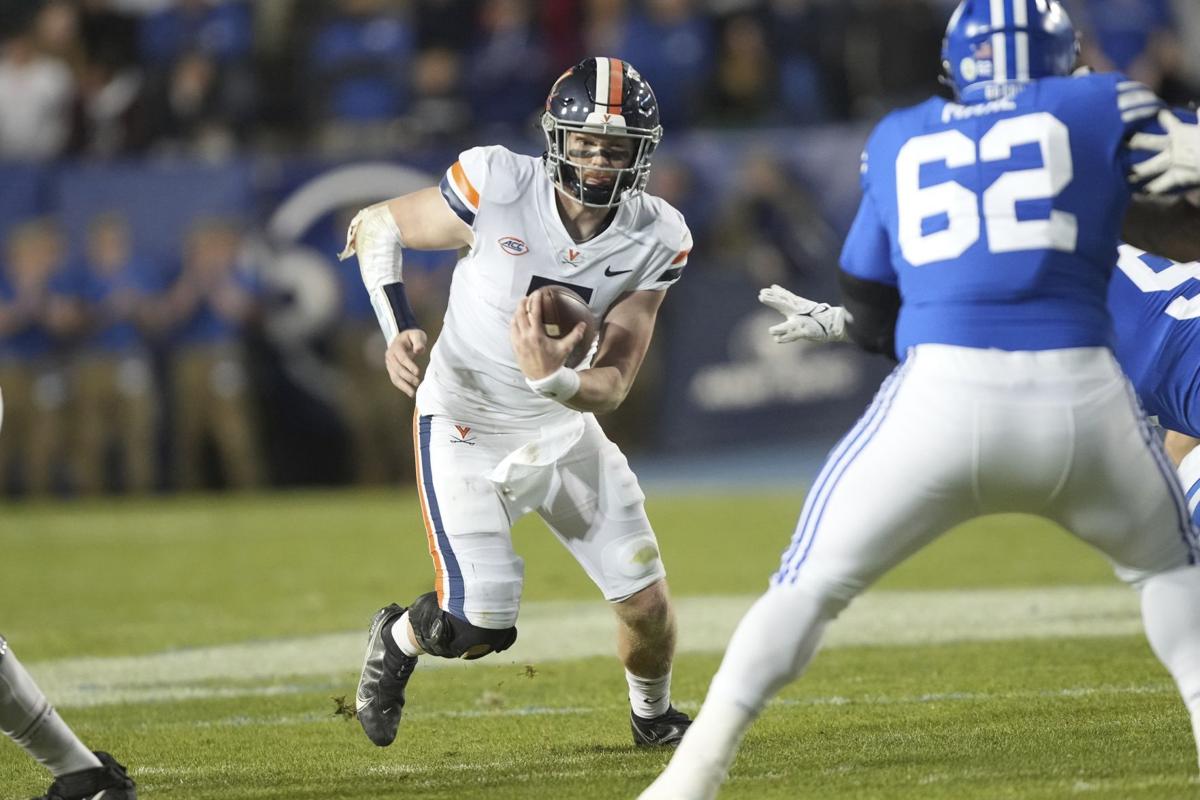 Virginia quarterback Brennan Armstrong is averaging a Power Five-best 395.2 passing yards. But he suffered a rib injury at BYU that could affect the rest of his season.

No defense can stop Brennan Armstrong. Except, maybe, the one he’s teamed with.

Virginia allowed four long touchdowns and 734 total yards in a 66-49 loss to No. 25 BYU, a loss overshadowed by a fourth-quarter rib injury to the Cavaliers’ star quarterback.

“Our defense has to get more stops, has to play better,” said UVA head coach Bronco Mendenhall after the Cavaliers gave up the most points in a game since a 68-0 loss to Texas in 1977. “That has to happen.”

In what Virginia had hoped would serve as a launching point for more national recognition for its quarterback, Armstrong didn’t disappoint. He helped UVA (6-3) erase a 21-0 first-quarter deficit, throwing for 342 yards and four touchdowns and running for another 94 and two scores.

But he suffered an apparent injury after scrambling for a first down in the fourth quarter. He stayed in the game for one more play, throwing his second interception of the night when he was unable to put any velocity on the ball. He walked off the field grimacing and pointing to his rib cage, telling Virginia coaches, “It’s broken.”

Those words could easily be used to describe UVA’s defense. That side of the ball was Mendenhall’s trademark during 11 successful seasons coaching at BYU and has been a key part of his rebuilding effort in Charlottesville.

But the past two seasons, the unit has struggled with allowing big plays, a flaw that is becoming increasingly crippling to the entire Cavaliers operation this year. So much so, not even Armstrong’s scintillating play can overcome it.

Saturday night, in Provo, Utah, Armstrong broke the Virginia record for passing yards in a season (3,557), eclipsing the mark Bryce Perkins (3,530) set in 2019. And yes, this team still has at least three more regular-season games and a bowl, though Armstrong’s status is up in the air.

All that and it wasn’t enough to overcome the slew of missed tackles and big plays allowed by the defense.

On an emotionally supercharged night that saw Mendenhall make his return to the school he coached to 11 straight bowl games, Virginia’s defense was a virtual no-show.

BYU (7-2) recognized Mendenhall on the video board at LaVell Edwards Stadium before the game and fans gave their former coach a rousing ovation. But the current iteration of the Cougars weren’t taking part in the lovefest. They scored on their first three possessions, taking a 21-0 lead less than seven minutes into the contest, a hot start aided by an Armstrong interception on Virginia’s second drive.

On the night, UVA allowed touchdown passes of 26 and 40 yards and scoring runs of 31 and 49, both by running back Tyler Allgeier. Allgeier finished with five touchdowns and 266 rushing yards.

“In my opinion, that’s the most physical team we’ve played the entire year,” said Mendenhall. “It showed in us not getting off blocks, not making tackles, and certainly not tackling their back.”

On the season, Virginia has now allowed 17 touchdowns of 20 yards or longer, an issue the staff does not seem to be able to find answers for.

Mendenhall similarly had no answers when asked about Armstrong’s status, though he acknowledged the quarterback’s injury would likely alter the team’s practice plans for the upcoming off week.

With another non-conference game up next — home against Notre Dame on Nov. 13 — Virginia might be wise to shut Armstrong down until the key ACC Coastal Division game at Pittsburgh on Nov. 20, assuming he’ll be healthy enough to play by then.

Pittsburgh’s loss to Miami on Saturday means that the Cavaliers can win the division with victories at Pitt and at home against rival Virginia Tech in the regular-season finale.

UVA goes into its off week with a bevy of questions to answer defensively and potentially one major one to address at quarterback.

BYU RB Tyler Allgeier dove into the end zone for one of his five TDs in Saturday’s 66-49 win over UVA in Provo, Utah. He ran for 266 yards, and BYU’s offense totaled 734.

BYU running back Tyler Allgeier (25) runs the ball as several Virginia players try to tackle him during the first half of an NCAA college football game Saturday, Oct. 30, 2021, in Provo, Utah. (AP Photo/George Frey)

Virginia quarterback Brennan Armstrong is averaging a Power Five-best 395.2 passing yards. But he suffered a rib injury at BYU that could affect the rest of his season. 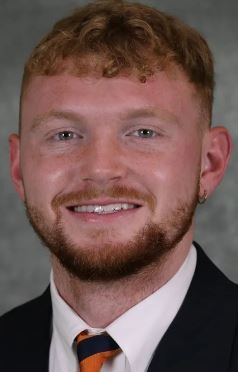