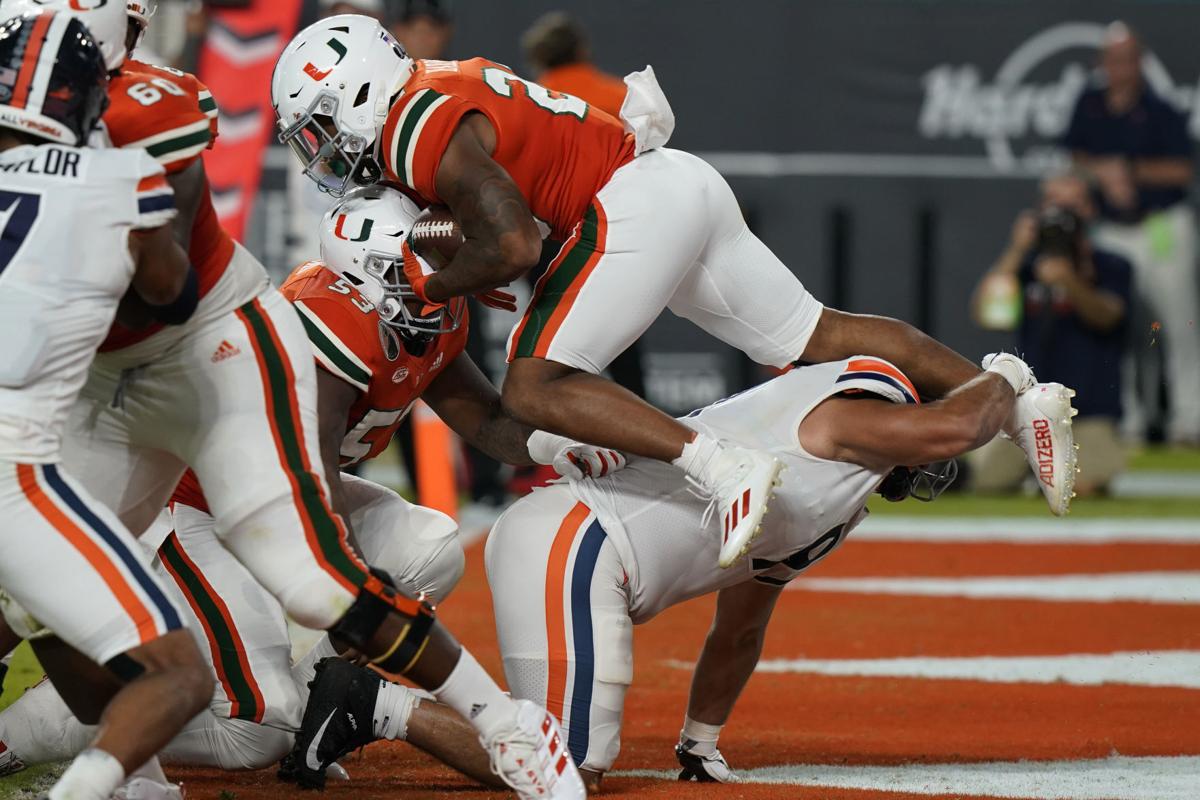 UVA defensive end Mandy Alonso grabs Miami running back Cam’Ron Harris in the end zone for a safety in the first quarter of Thursday’s game. Alonso is a Miami native, and Thursday marked his first collegiate win in his hometown — UVA was 0-3 at Miami during his career. 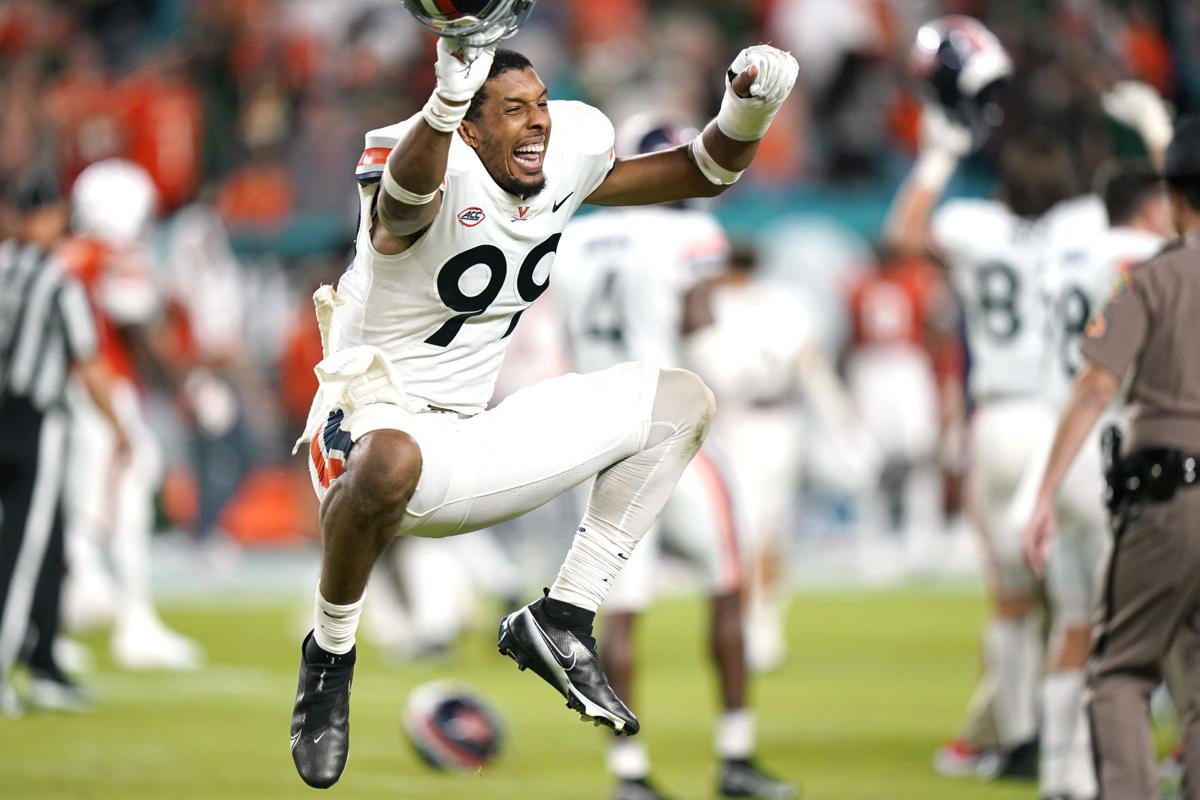 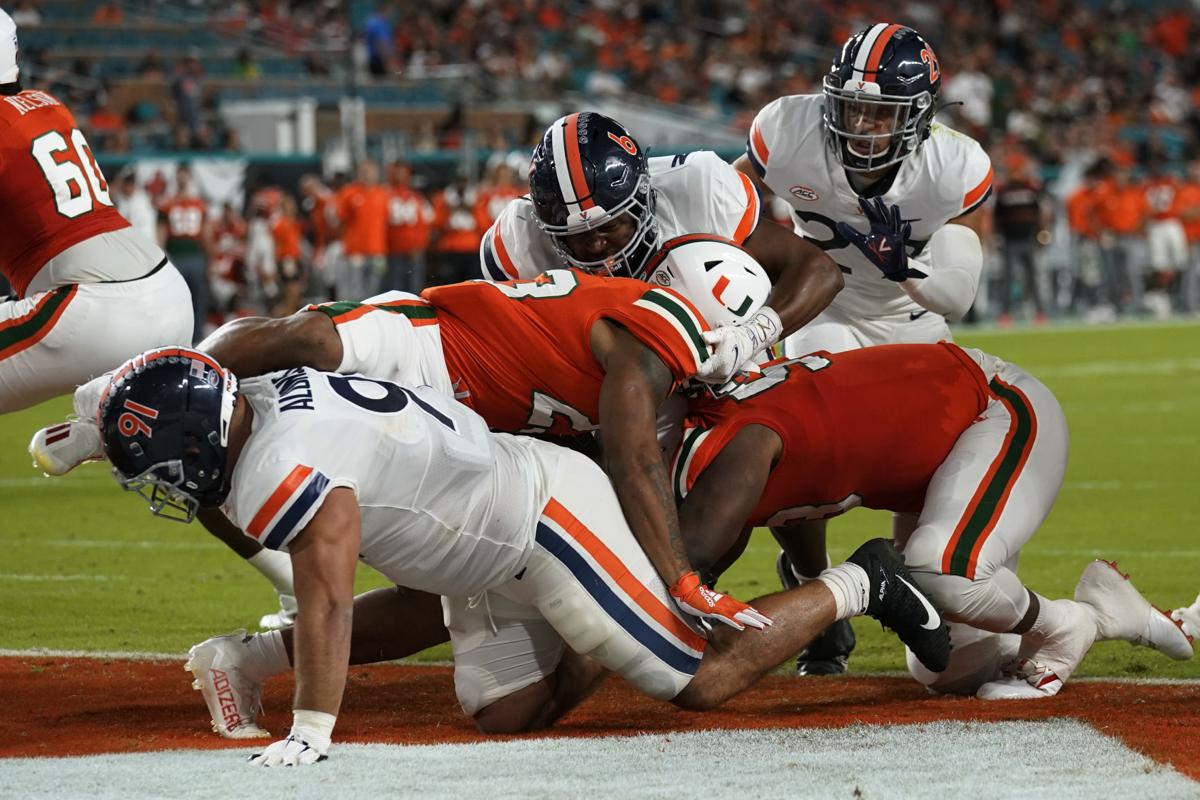 Miami linebacker Sam Brooks Jr. attempted to tackle Virginia running back Wayne Taulapapa during the second half of Friday’s game. Taulapapa ran for a season-high 62 yards on 11 carries and scored a first-quarter touchdown for the Cavaliers in the 30-28 win.

Growing up in Miami, many — if not all — of Mandy Alonso’s friends were Hurricanes fans. But when he looked up in the stands Thursday night at Hard Rock Stadium, it sure didn’t look that way.

“When I come down here, they put on a UVA shirt or a 91 shirt and they cheer me on,” said Alonso. “That’s really special to me.”

Alonso had never won in his hometown, going 0-3 against the Hurricanes and losing the 2019 Orange Bowl against Florida. But when this one ended, Alonso, a fifth-year senior and team captain, was breaking the rock, a symbolic reward for a night’s work that saw him record four tackles, two sacks and the stop on a first-quarter safety.

Those two points, scored when Alonso came through the middle of the line and grabbed the legs of Miami running back Cam’Ron Harris, dropping him in the end zone, proved to be Virginia’s margin of victory.

That’s because the Hurricanes’ would-be game-winning field goal on the game’s final play caromed off the left upright, leaving them stunned and UVA celebrating a 30-28 road win, the team’s first ACC victory of the season.

“We knew they were pinned down to their own end zone,” said Alonso of his big, early defensive play with Miami starting from its own 1-yard line. “We were just trying to get after them. We came in through the inside and I came free and was lucky enough to make that play.”

Luck would be with the Cavaliers (3-2, 1-2 ACC) for much of the evening, even before freshman kicker Andres Borregales pushed his potential winning kick just wide enough that it doinked back toward the field of play instead of the through the uprights.

It was certainly there when Dontayvion Wicks caught a 36-yard touchdown pass late in the third quarter. The pass from Brennan Armstrong appeared to be intercepted by Miami’s Marcus Clark. Instead, the ball went through his hands and bounced up and down Wicks’ back before popping in the air. When it did, Wicks stuck out one hand and grabbed it for a score that put Virginia up 27-14 with 5:50 left in the period.

Alonso’s safety had given UVA a 9-0 lead with 1:10 left in the opening quarter. At both moments, Virginia appeared to be in control of a game it absolutely had to win, having been blown out in back-to-back ACC contests against North Carolina and Wake Forest the past two weeks.

But the Cavaliers, who never trailed Thursday, were never able to put any real distance between themselves and the Hurricanes (2-3, 0-1), never able to put the game away until Borregales’ miss handed it back to them in stunning fashion.

Asked if he was disappointed his team had to sweat out the win, Virginia coach Bronco Mendenhall chose to bask in the moment of an important win, while simultaneously offering a blunt assessment of his program.

Slapped silly the past two games by North Carolina and Wake Forest, Virginia’s defense wasn’t lights out Thursday in South Florida, but it did get off to a big start that helped UVA hold onto the lead all night long.

And while the offense had its least productive overall game of the season, it did convert on nine of 18 third downs and it rushed for a season-high 181 yards. It was obvious all night how much this game meant to the Cavaliers, obvious in every extra-effort block they got from running back Wayne Taulapapa or wider receiver Rashaun Henry or quarterback/receiver Jacob Rodriguez or tight end Grant Misch.

A loss to Miami would have — unofficially, of course — taken Virginia out of any shot in the Coastal Division title race. It would have made a return to a bowl game — the Cavaliers opted out last season — a daunting, uphill climb.

Desperation doesn’t produce beauty, nor does it demand it. What the most desperate of situations — like the one Virginia faced Thursday night — require is grit and tenacity.

And that’s what UVA displayed.

“We’re staying with each other,” said Mendenhall. “There’s things to clean up, but if you’re not seeing that, you’re just not looking, because they’re trying so hard and they’re improving and they’re becoming.”

What can the 2021 Cavaliers become?

Mendenhall offered a bemused chuckle as he answered that question.

“We’re just focusing on one play, one game, one day, one minute at a time to do the very best we can,” he said. “To think farther than that, it’s just entertainment and speculation. And I don’t have time for it.”

He doesn’t. He still has plenty of work to do.

UVA defensive end Mandy Alonso grabs Miami running back Cam’Ron Harris in the end zone for a safety in the first quarter of Thursday’s game. Alonso is a Miami native, and Thursday marked his first collegiate win in his hometown — UVA was 0-3 at Miami during his career.

Miami linebacker Sam Brooks Jr. attempted to tackle Virginia running back Wayne Taulapapa during the second half of Friday’s game. Taulapapa ran for a season-high 62 yards on 11 carries and scored a first-quarter touchdown for the Cavaliers in the 30-28 win.