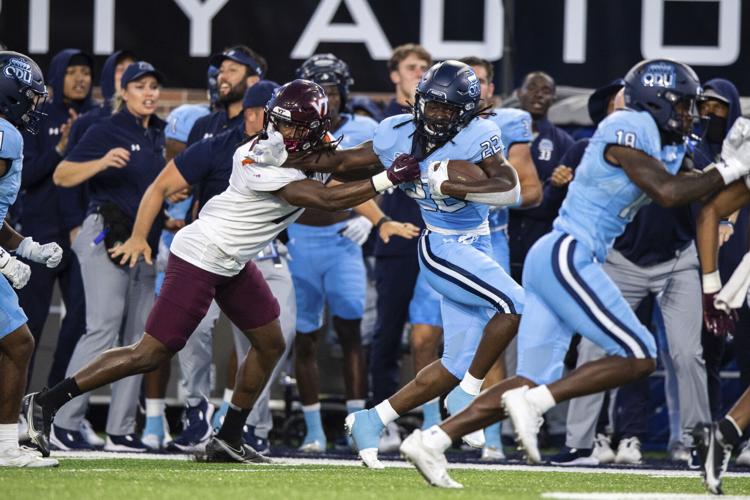 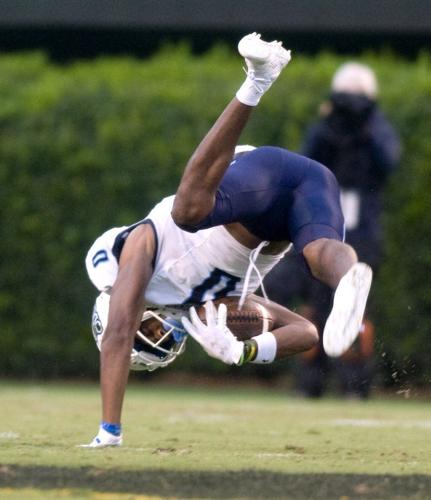 CHARLOTTESVILLE — Old Dominion’s biggest offensive play in its Week 1 upset of Virginia Tech came on a 38-yard pass from Hayden Wolff to Ali Jennings late in the fourth quarter that set up the Monarchs’ game-winning touchdown.

The next week, in a road loss to East Carolina, Jennings had three receptions that went for 35 yards or longer, and sophomore receiver Jordan Bly added a 31-yarder.

“They’re a big play team,” said UVA safety Antonio Clary as his group readies to face ODU Saturday at Scott Stadium. “They want to take the top off the defense.”

The Monarchs (1-1) have already hit on six plays that went for 30 yards or longer, tied for the 24th most in the nation. UVA (1-1) gave up three such big plays in the loss to Illinois on Saturday.

And with the win over Virginia Tech already in their pocket, ODU’s players said they’re confident going into the Virginia game.

“It’s always good to know you can beat an ACC team, a Power Five school,” said Bly. “We definitely feel like we can beat these guys, too. We feel like our matchups match up well with them and we have a lot of things in our favor.”

(Patenaude did not respond to request to be interviewed for this story.)

“Our players have adjusted very, very well. I think pretty seamless,” said Rahne. “We’ve got some great leadership on the offensive side of the ball, so we’ve adjusted well. I think the transition has gone well.”

Old Dominion’s veteran players said the offense they worked on under Patenaude in the spring was largely a continuation of what the team had been doing under Campbell, and that little has changed now under Rheiner.

“Our base offense is still our base offense, it’s the same stuff we’ve been running since Coach Rahne got here,” said Wolff. “That’s never going to change while Coach Rahne is here. It’s all stuff that we know, same verbage, same terminology.”

Wolff did get off to a bit of a shaky start in the opener. Through the first three quarters of the Virginia Tech game, he was 9 for 24 passing for 54 yards. But in the fourth quarter, over three drives, Wolff went 5 for 11 for 111 yards throwing the ball.

In the Monarchs’ second game, a 39-21 road loss at East Carolina, he finished 18 for 29 for 275 yards and three touchdowns, with one interception.

“It was just getting those first game jitters out,” said Wolff, who noted it was difficult to know exactly what Tech’s defense would look like under its new coaching staff. “It’s just a matter of settling in. Not having played football in eight months is always difficult for a quarterback.”

The passing game got in rhythm against ECU and, the Monarchs believe, they can build on that this week. And big plays could be a big part of that.

“We make it a point that we should always try to win the big-play margin,” said Bly. “We want to have as many explosive plays as possible. That’s going to swing momentum.”

A year after the Cavaliers’ struggled allowing big plays, new defensive coordinator John Rudzinksi has installed a system designed to keep plays in front of the defense and make opponents earn their way down the field in small bites, not large chunks.

Rudzinski, a former coordinator at Air Force, knows his unit will be tested in that department this week.

“They’ve got a few guys who can blow the lid off of a defense,” he said.

Barber: Tony Elliott is scrambling to get his Virginia team to 'buy in' before it's too late

The Dukes received votes in the Associated Press Top 25 poll.

Outside of the Power Five stratosphere, 66 teams compete in Bowl Subdivision college football. Two of those 66 survived September unblemished,…

CHARLOTTESVILLE — Nick Jackson has started 27 straight games at inside linebacker for Virginia, a streak that will end Saturday when the team …