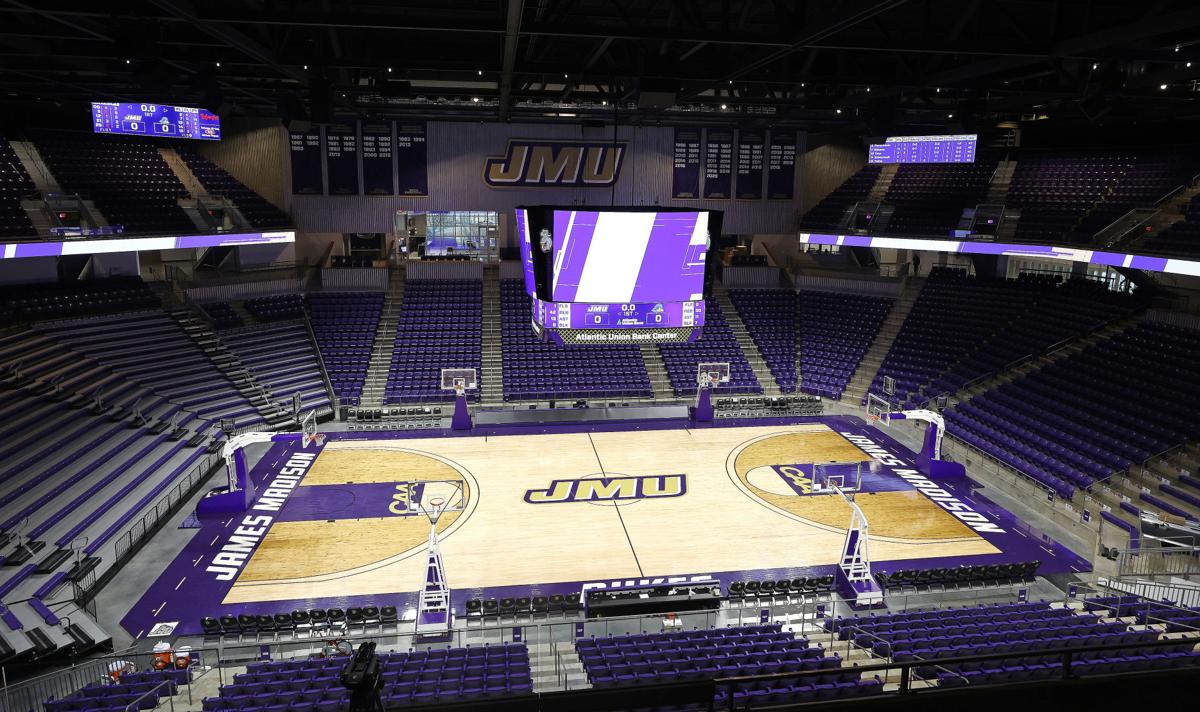 JMU's Atlantic Union Bank Center will open for their first basketball game this month. Photo was taken on Wednesday, November 11, 2020. 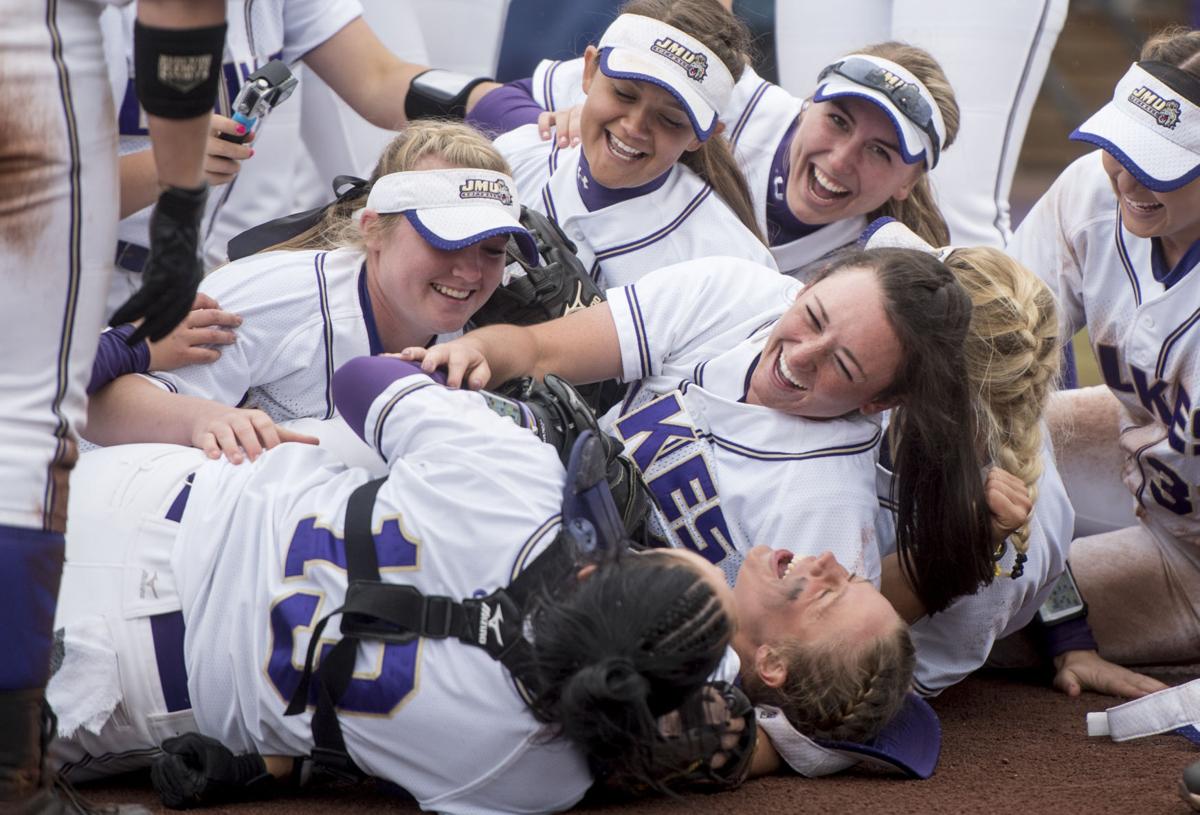 The James Madison softball team celebrates after beating Hofstra 9-0 in the CAA championship game in Harrisonburg. Megan Good fired a shutout in her 36th complete game of the season as the Dukes (50-6) won the conference title for the second consecutive season. Now, JMU waits for its NCAA regional assignment.

The Colonial Athletic Association will not allow James Madison’s teams to compete for league championships this year if the school accepts an invitation to join another conference.

The Dukes are expected to formally move to the Sun Belt Conference next year, a move that could be announced as soon as Friday.

Automatic bids would be unavailable for the Dukes, but the decision would not block teams from receiving at-large bids for the NCAA tournament. This does not apply to the CAA-leading football team, which remains eligible for an automatic bid from the conference because of separate bylaws.

“As we head into a potentially monumental week for the future of James Madison University and our intercollegiate athletics program, we were extremely disappointed to be informed by the Colonial Athletic Association that, should the university accept an invitation to another conference, JMU student-athletes would not be allowed to compete for postseason conference team championships and, therefore, for the opportunity to earn NCAA automatic team qualification,” the school said in a joint statement from President Jonathan Alger and athletic director Jeff Bourne. “In an era when the industry of college athletics stresses student-athlete welfare, this decision is completely contrary to those ideals.”

The CAA has a bylaw that allows it to block schools from competing for conference championships if they’ve declared their intention to leave the league. It enforced that bylaw when Old Dominion left for Conference USA in 2013.

“We have great respect for JMU as a conference,” said CAA commissioner Joe D’Antonio. “... I’ll be honest. It’s not my job to determine whether it makes sense or doesn’t make sense. it’s my job to make sure the bylaws are enforced the way they’re written.”

That provided little consolation to JMU’s devastated athletes and coaches, who pointed to the stress and struggles of competing through a pandemic and the supposed focus on student-athlete well-being as circumstances that should have led the CAA to reconsider.

“It is hard being a college student right now, with COVID and isolation and all the challenges they have to endure,” said JMU men’s basketball coach Mark Byington. “For them to bring on more anxiety, more stress, more problems, it just seems tone deaf.”

JMU men’s soccer coach Paul Zazenski said his players were “having a hard time” processing the news. He said it’s hard to reconcile the emphasis on the student-athlete with the CAA decision.

“I don’t think that that was really taken into consideration at all,” said Zazenski, whose team had qualified for the league tournament but now won’t be allowed to compete. “It was about other things. It’s really tough for the student athletes.”

“It doesn’t have to be this way,” said JMU women’s lacrosse coach Shelly Klaes-Bawcombe. “We focus on championships. To rip that away, it’s really rough.”

JMU appealed to the presidents of the other conference schools on Monday night, but those presidents voted overwhelmingly to bar the Dukes from postseason play in 2021-22.

“We were thorough and heartfelt in appealing to the league’s council of presidents, but that appeal was denied,” JMU said in its statement. “Eight other Division I conferences have full members that have publicly announced an exit and yet all eight have allowed the student-athletes at those institutions to continue competing for championships. To our knowledge, the CAA is alone in this outdated bylaw. JMU has striven to be a good partner of the CAA and to treat other institutions as they would want to be treated, but that ideal is not being reciprocated. With our sights set on an important next step on Friday, it’s unfortunate that the CAA made this decision right in the middle of the fall championship season.”

The third-ranked Dukes’ football team is 7-1 and leads the CAA at 5-1, just ahead of William & Mary (4-1) and Villanova (4-1). The playoff contender is on track for the automatic bid it’s still eligible for. JMU also will not be permitted to host the four league tournaments it had been scheduled to host this year — men’s soccer, women’s basketball, women’s lacrosse and softball.

Athletes who compete in sports that sponsor individual championships — including swimming and diving and track and field — can still vie for those titles, but JMU’s teams cannot compete for team championships.

JMU, after receiving approval from its Board of Visitors last Friday to continue with plans to jump from the lower FCS level to the FBS level and pursue a Sun Belt invitation, is scheduled to meet with the General Assembly’s Intercollegiate Athletics Review Commission this Friday for the next step of the process.

Through a 2015 bill meant to subdue the costs of student athletic fees, JMU will have to present to the commission a plan showing the financial impact of its conference move and how it will address that impact. In the bill, schools at the FCS level can fund 70% of their athletic budget through student fees. But schools at the Group of Five FBS level where JMU is headed are capped at 55%.

Representatives at the school will meet with the commission at 10:30 a.m. on Friday morning in Richmond. Same-day approval of JMU’s plan could happen, which could allow for the school to formally move forward with joining the Sun Belt on Friday.

“If and when JMU does indicate to the conference that they are withdrawing as a member, then we do have a bylaw that indicates they will not be eligible to compete for conference championships,” said D’Antonio.

JMU will be permitted to compete in the CAA women’s soccer and field hockey tournaments, which are already set to begin this weekend.

Chiefs end up on top in potential game of the year

Chiefs end up on top in potential game of the year

JMU's Atlantic Union Bank Center will open for their first basketball game this month. Photo was taken on Wednesday, November 11, 2020.

The James Madison softball team celebrates after beating Hofstra 9-0 in the CAA championship game in Harrisonburg. Megan Good fired a shutout in her 36th complete game of the season as the Dukes (50-6) won the conference title for the second consecutive season. Now, JMU waits for its NCAA regional assignment. 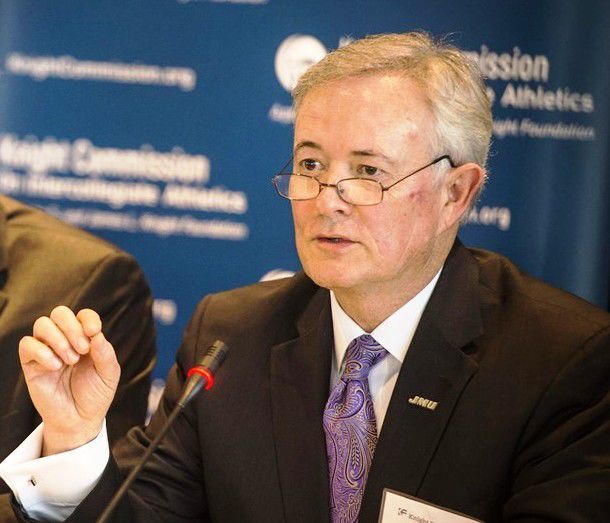 Jeff Bourne has served as James Madison’s athletics director since 1999.