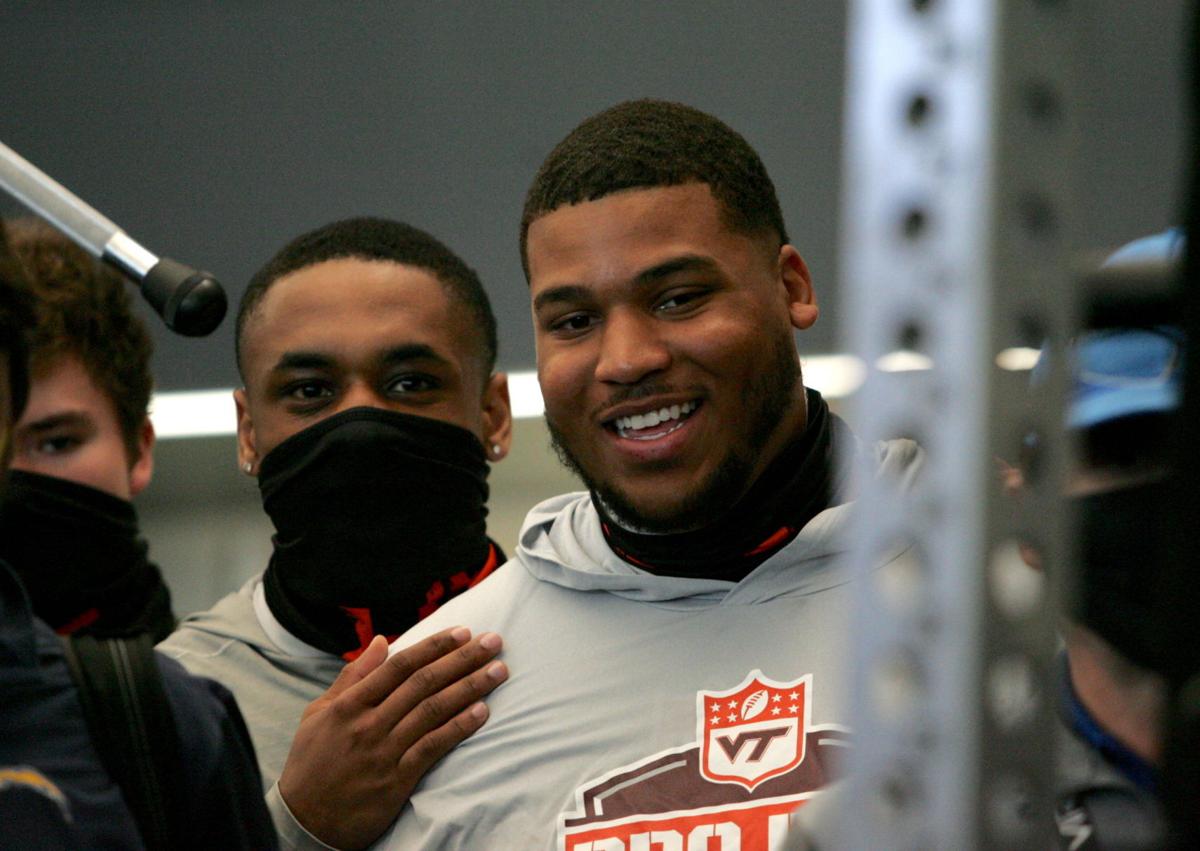 Virginia Tech’s pro day was offensive lineman Christian Darrisaw’s only chance to have an in-person workout in front of NFL personnel. 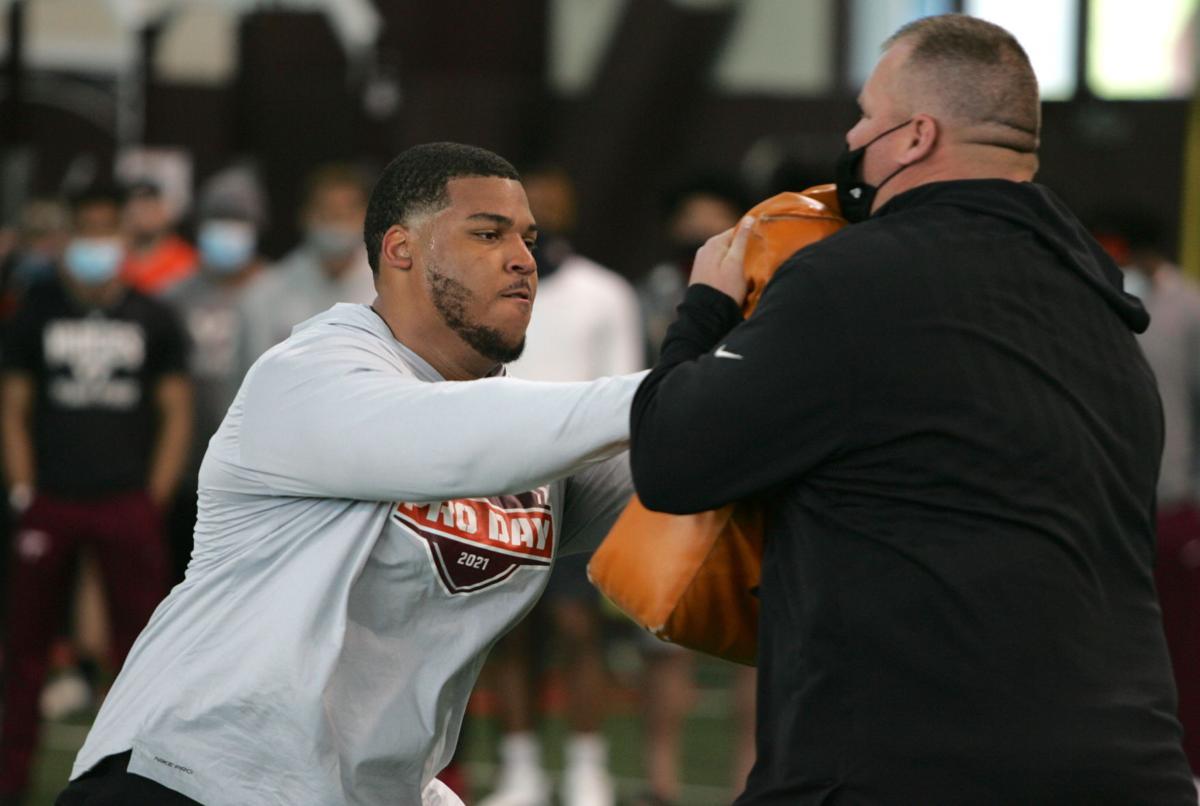 By MIKE NIZIOLEK The Roanoke Times

Former Virginia Tech offensive lineman Christian Darrisaw made his debut against Florida State in front of 80,000-plus fans clad in black at Doak Walker Stadium.

The true freshman handled the rowdy atmosphere in stride.

Lining up opposite FSU defensive end Brian Burns, one of the ACC’s top pass-rushers going into the 2018 season, didn’t even rattle him.

There were far fewer spectators at Tech’s pro day on March 26 — and no one was looking to knock his head off — but when it came time for Darrisaw to run through position drills inside the team’s indoor practice facility, he felt butterflies.

They started as everybody in the building gathered around him to watch his workout.

His former teammates and coaches, fellow pro day participants, members of the media and 50-plus NFL scouts and coaches formed a ragged circle around the cones set up to mark Darrisaw’s workout space, and all eyes were on him for nearly 30 minutes.

“I’ve never had that before,” Darrisaw said.

Tech’s pro day was his only chance to have an in-person workout in front of NFL personnel since the league made significant changes to this year’s draft calendar amid the COVID-19 pandemic.

The NFL canceled the traditional combine and shifted testing and in-person workouts to each prospect’s pro day. Teams would normally be able to fly in prospects like Darrisaw for workouts.

Darrisaw had the added pressure of proving he was healthy after undergoing surgery in early January to repair a core muscle injury.

“If he wasn’t feeling well, had a tight hamstring or tested positive for COVID-19, he would’ve had no chance or other opportunities,” Darrisaw’s agent Cody Recchion said. “There was a lot more pressure this year than any other time for a pro day.”

Darrisaw is one of a handful of Hokies who hopes to hear his named called in this year’s NFL draft. He and cornerback Caleb Farley are projected first-round selections, and running back Khalil Herbert and safety Divine Deablo are hoping to be picked in later rounds.

Darrisaw got an indication of what the NFL coaches in attendance had in store for him when one of the assistants came up to him in the morning and told him to get ready.

“I’m going to push you today,” the coach said.

There were at least eight offensive line coaches in attendance at Tech’s pro day, a number Darrisaw’s representatives were happy with considering there were no other offensive line prospects working out and three other pro days were scheduled (BYU, Michigan and Boston College) on the same day.

“It’s always a big indication [of interest],” Recchion said. “‘Especially this year since from what I heard, only three people are allowed in per team ... I think that was a great number.”

Darrisaw found out quickly that they didn’t travel to Blacksburg just to hold a clipboard and take notes.

“Everybody there wanted to poke and prod him pretty good,” Tech offensive line coach Vance Vice said with a laugh.

Five coaches led Darrisaw through drills, and each one was set up the same way — the assistant would quickly run through a set of instructions and have him do a series of reps. They would give him pointers along the way if they saw something they didn’t like.

The most intense period of the workout came when it was Pittsburgh Steelers offensive line coach Adrian Klemm’s turn. He got right up in Darrisaw’s face with a blocking pad several times on a continuous pass blocking drill and waited longer than anyone to let up on the reps.

Klemm, 43, was nearly 15 years removed from his playing days with the Green Bay Packers, but the 6-foot-3 assistant appeared to enjoy the drill’s physicality.

Recchion wouldn’t comment on interest from specific teams, but he remains confident in Darrisaw’s first-round projection. The Young Money APAA agent still always advises his clients things “can get kind of crazy” on draft night.

“You do hold your breath a little bit,” Recchion said. “That’s not a negative thing at all on Christian, it’s just being realistic. There could be a run on quarterbacks early that affects things or the lineman might not come off the board as early as you think. It’s kind of how the draft works, that’s what is hard to predict.”

That unpredictability could be just as much to Darrisaw’s benefit.

Recchion used the example of the recent trade that sent quarterback Sam Darnold from the New York Jets to the Carolina Panthers.

“It opens up the Panthers at spot eight for the lineman that they need,” Recchion said. “There are going to be things that happen between now and even on draft day, teams moving up and back.”

For draft night, Darrisaw is planning to have a small family gathering. He wasn’t one of the 16 players invited to the draft in Cleveland, but was asked by the NFL to participate virtually and will have cameras set up on draft night to capture his reaction.

It hasn’t quite hit Darrisaw that he will become an instant millionaire based on just the signing bonus for anyone selected in the first round.

“It will be a surreal moment, definitely,” Darrisaw said. “When I wake up one morning and check the bank account and see all those commas.”

After establishing the first-ever intercollegiate women’s lacrosse program at VCU, coach Jen O’Brien will not return for a seventh season.

Virginia Tech’s pro day was offensive lineman Christian Darrisaw’s only chance to have an in-person workout in front of NFL personnel.