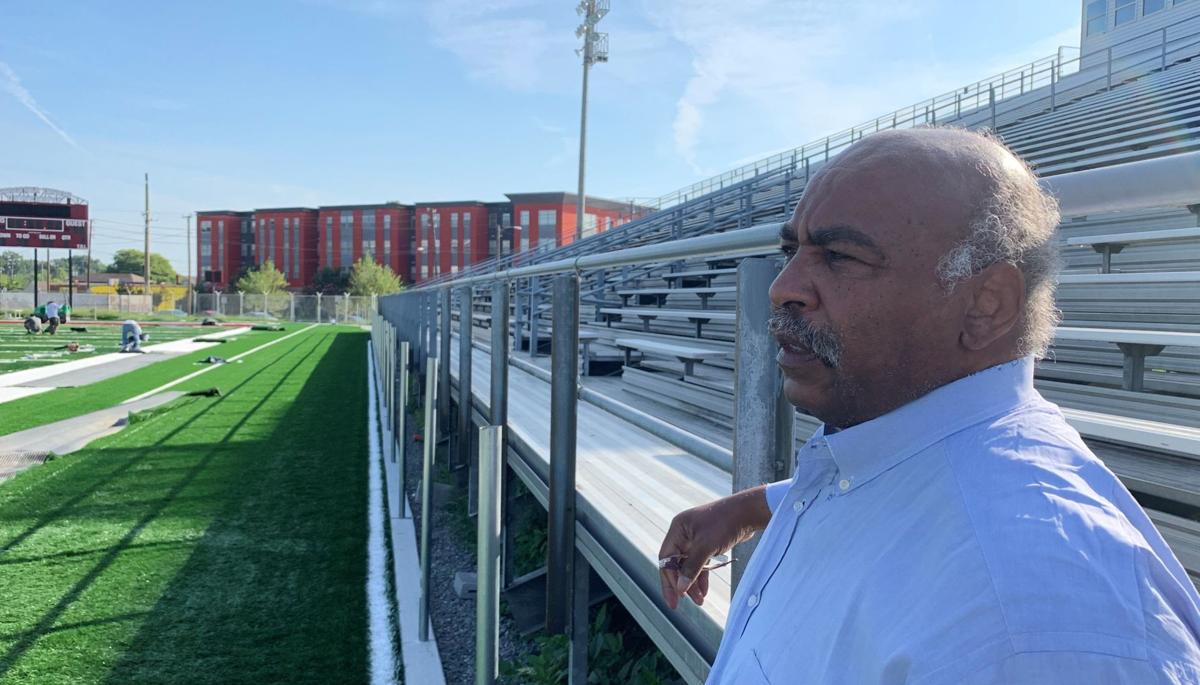 “It’s incredible. Part of the thought is having the joy of being able to be [involved] in the beginning of something.”

Pro Football Hall of Famer Willie Lanier, on having the field at Virginia Union’s Hovey Stadium named after him 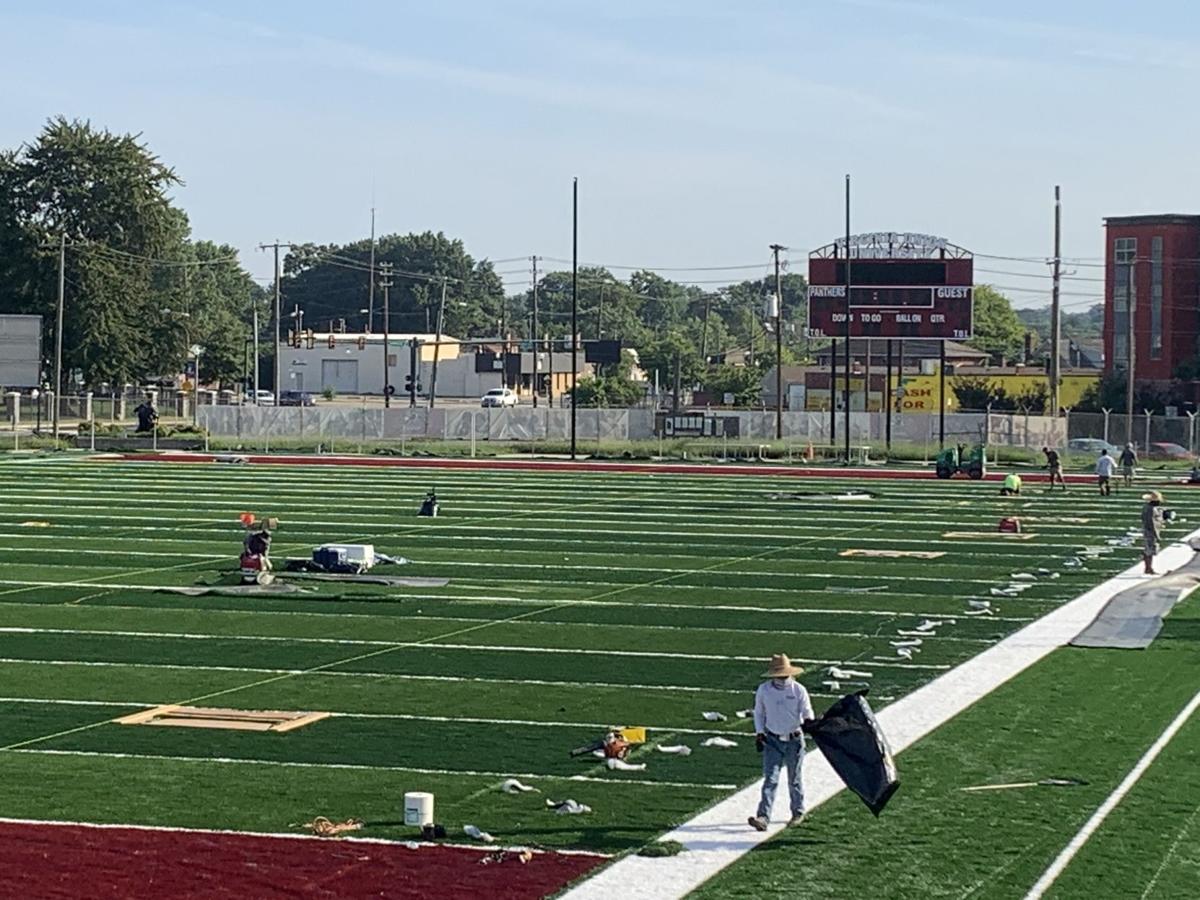 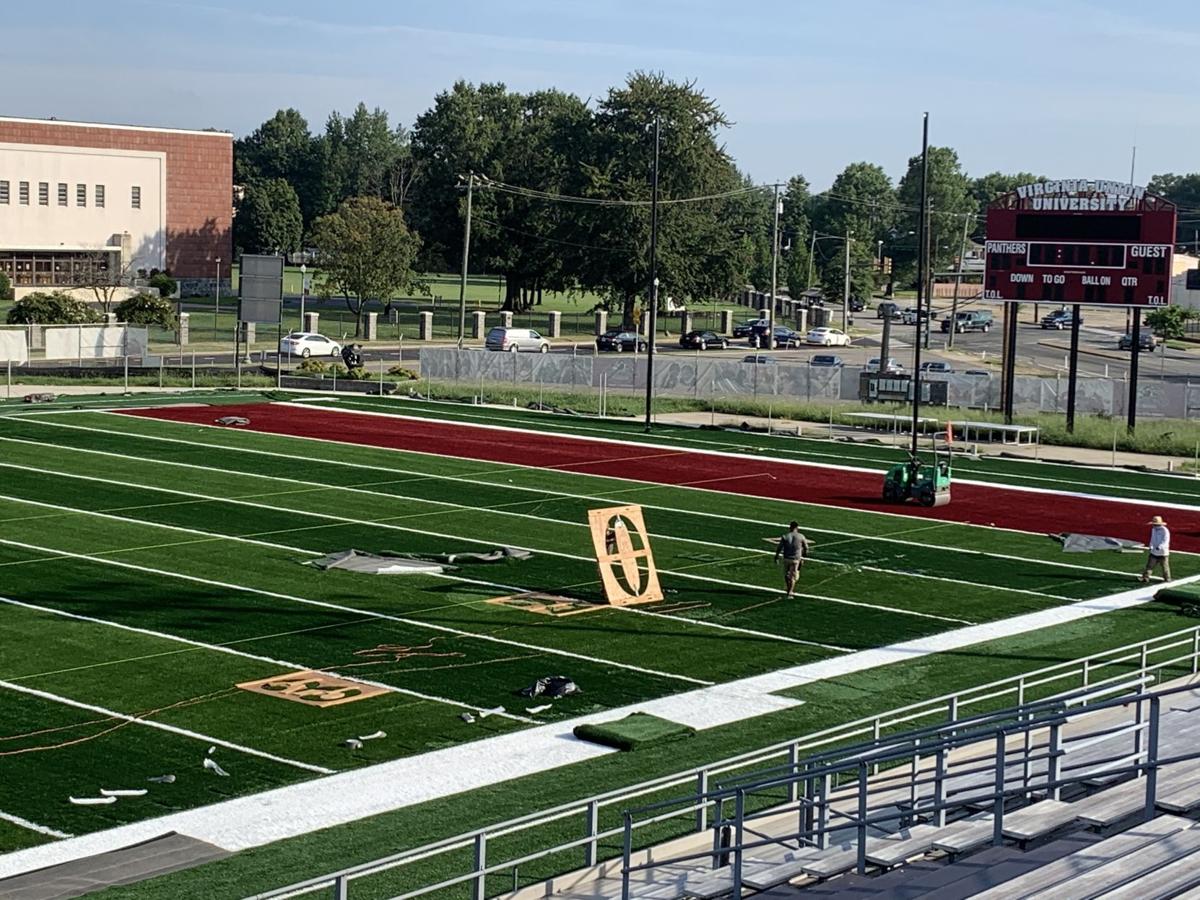 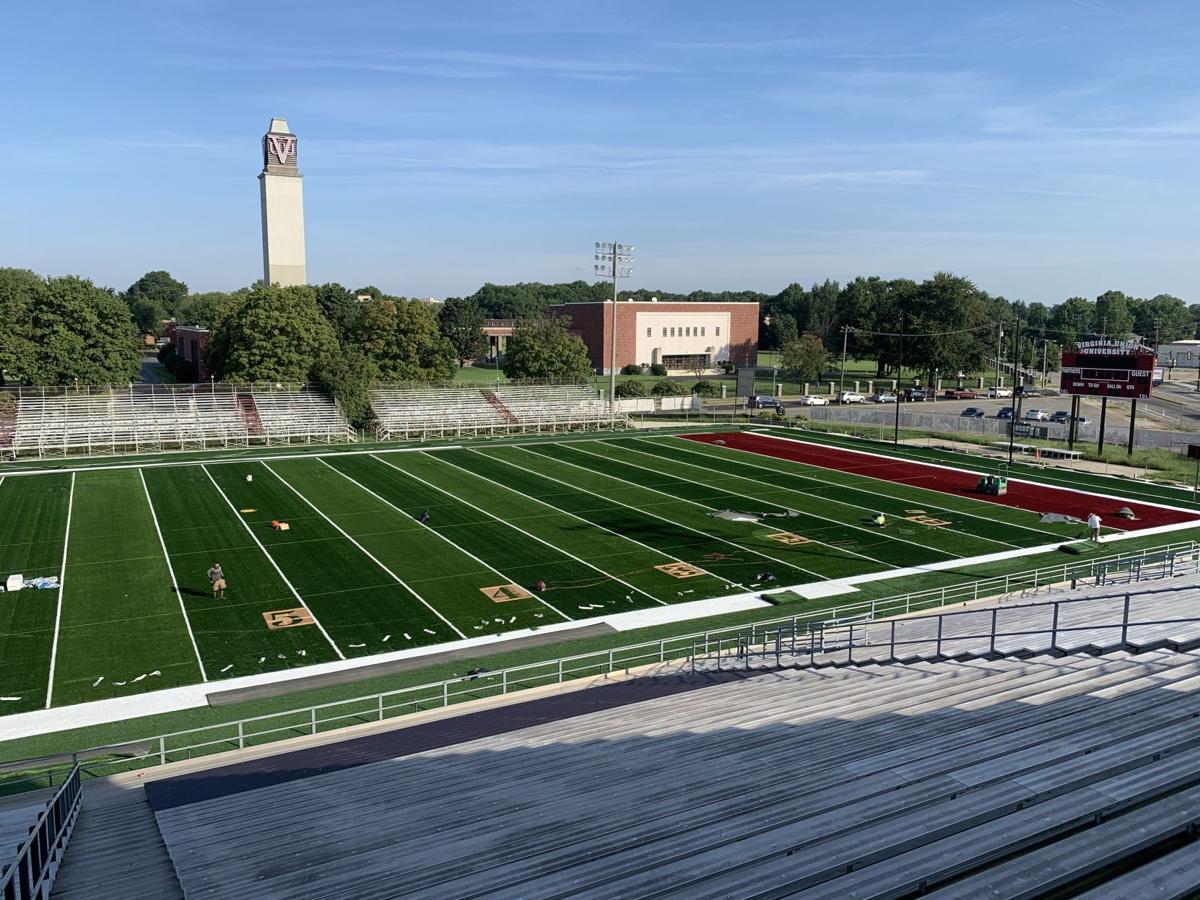 The FieldTurf at Virginia Union's Willie Lanier Field at Hovey Stadium replaces grass at a location that has been used for football since 1909.

A man who was part of a crew installing an artificial surface at Virginia Union University on Thursday morning took a break to greet a visitor observing the process from the sideline.

“I’ve always been a big fan of yours,” the man said to Pro Football Hall of Famer Willie Lanier.

Lanier smiled and spoke with the worker, whose portfolio would forever include that he met Willie Lanier while helping attach the FieldTurf to Willie Lanier Field at Hovey Stadium.

Lanier, a Maggie Walker High (Class of 1963) and Morgan State alum, starred at middle linebacker for the Kansas City Chiefs from 1967 to 1977. His Maggie Walker teams played home games where he walked Thursday, at VUU’s Hovey Field.

VUU, a Division II school, determined it would replace Hovey’s grass with a $1.2 million FieldTurf surface at its football stadium and contacted Lanier about the project. Hovey Field, which has a capacity of 10,000, has been home to VUU football since 1909.

“It’s incredible,” Lanier, a Richmond-area resident, said of the new surface. “Part of the thought is having the joy of being able to be [involved] in the beginning of something.

“You start creating some things in your mind that can give rise to future outcomes that are beyond comprehension. I’ll say it like this, this field, if you show up here, causes you to feel more equal. If you can’t get to equal, your potential opportunity is going to be more limited.”

The Panthers will not play football this fall because of the national health crisis. VUU and the CIAA, the league to which the school belongs, are exploring the possibility of a spring football season, if the COVID-19 threat diminishes. That would represent the opening of Willie Lanier Field at Hovey Stadium.

“So if in any small way from this background that I had in sports, having the chance to influence that is a heck of a wonderful journey that God has graced me with the ability to help provide the launching for that.”

Hovey Field is the second-oldest college football field in continuous use in the U.S., according to the school.

The oldest is Harvard Stadium, which opened on 1903. The grass at Harvard Stadium was replaced by an artificial surface in 2006, meaning Hovey Field was the oldest grass college field in continuous use.

Matt Ward, a senior project manager for LandTek, the New York-based, self-general contractor that specializes in sports facility design and construction, said it took about three weeks to remove the grass and prepare the area for its new look. Then came the three-week installation of a drainage system and a field foundation. At that point, the turf could be installed.

The Willie Lanier Field-Hovey Stadium project will be financed through grants, donations and other sources, according to Joe Taylor, VUU’s vice president for intercollegiate athletics.

Hovey Field, originally Hovey Park, was named after George Rice Hovey, a former VUU professor and president who helped raise funds to spearhead its creation, according to the school. Hovey died in 1943.

Radford ranks second on the No. 20 Hokies in scoring and rebounding.

Radford ranks second on the No. 20 Hokies in scoring and rebounding.

Richmond is scheduled to be one of eight cities affiliated with the Professional Collegiate League, which will offer a new model for top-tier …

VCU stifles Dayton in 66-43 victory at the Siegel Center

VCU stifles Dayton in 66-43 victory at the Siegel Center

Hauser scored 11 of his game-high 22 points in the last 9:43 as No. 13 UVA erased an 11-point second-half deficit to rally past Georgia Tech 64-62, winning its sixth straight and remaining undefeated in ACC play.

“It’s incredible. Part of the thought is having the joy of being able to be [involved] in the beginning of something.”

Pro Football Hall of Famer Willie Lanier, on having the field at Virginia Union’s Hovey Stadium named after him

The FieldTurf at Virginia Union's Willie Lanier Field at Hovey Stadium replaces grass at a location that has been used for football since 1909. 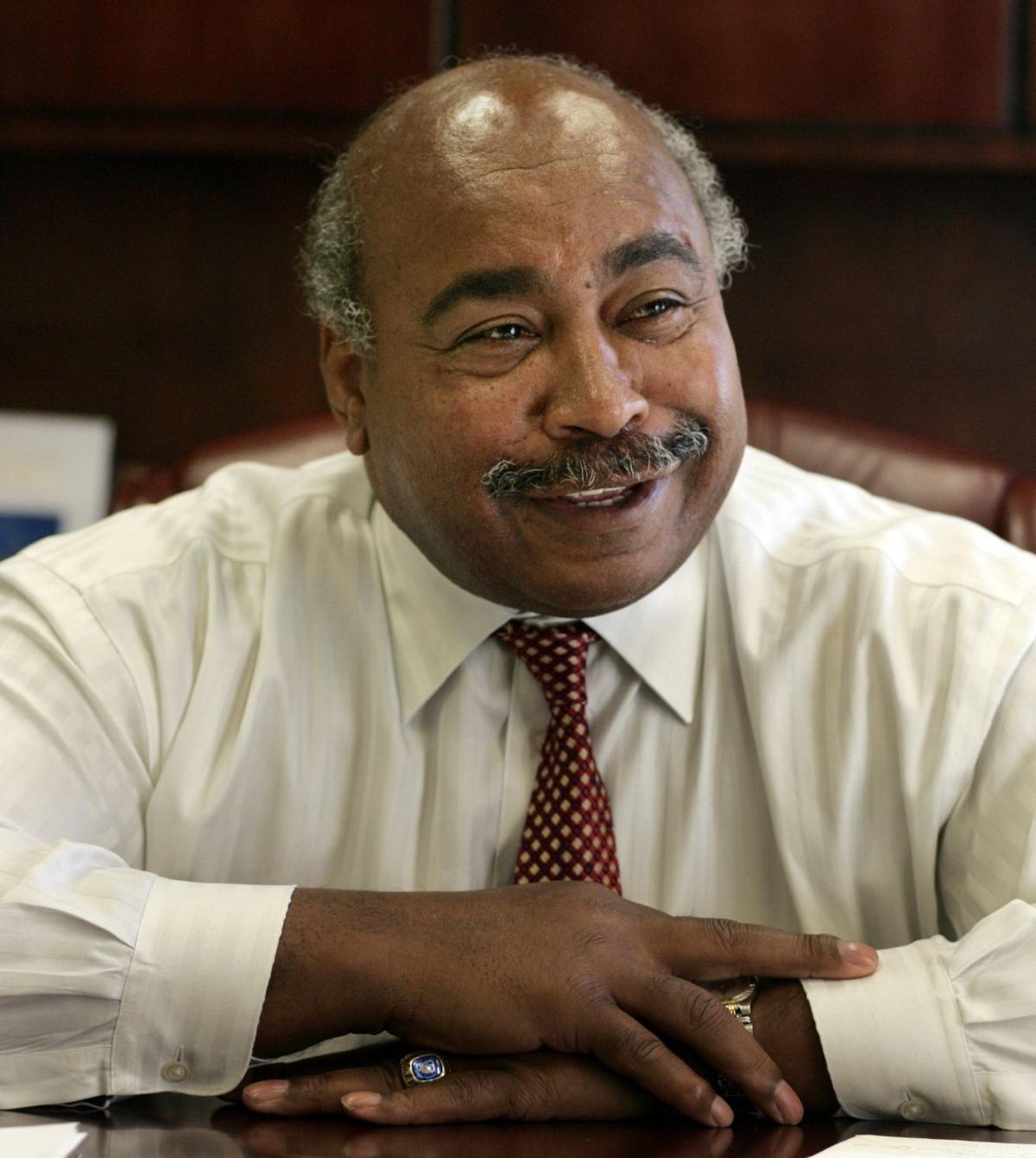 Willie Lanier is the namesake of the new field at VUU’s Hovey Stadium.