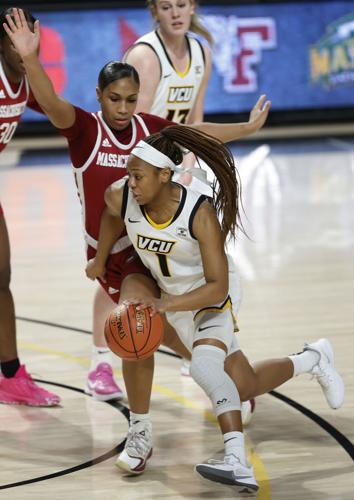 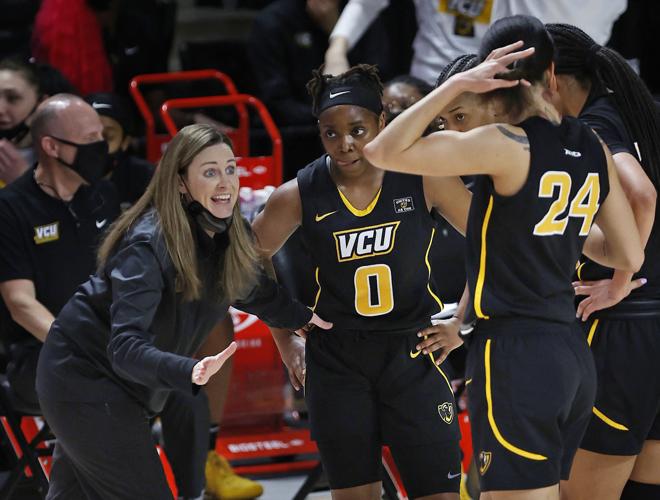 VCU Coach Beth O'Boyle talks to the Rams during a timeout as they play Dayton in the Siegel Center in Richmond, Va., during the Atlantic 10 Tournament semifinals Saturday, March 13, 2021. 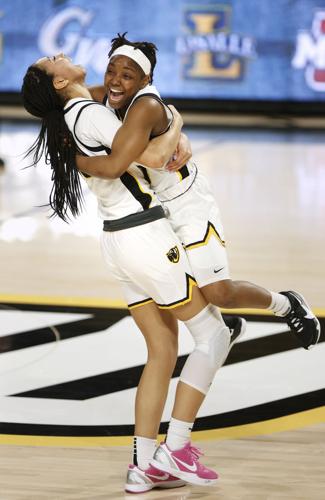 Coming off historic postseason success in the spring, VCU women’s basketball didn’t leave the impact of its experience behind at the site of the NCAA tournament in San Antonio when it boarded the plane back to Richmond.

The Rams, in mid March, won four straight Atlantic 10 tournament games at the Siegel Center to claim what was their first conference tournament title. It earned the program its first NCAA tournament berth since 2009 and its second overall.

VCU fell to Indiana in the NCAA first round. But when the group reconvened about four months later for the start of its summer training program, coach Beth O’Boyle sensed a notable energy catalyzed by what was accomplished last season.

“I think the experience of going through the A-10 tournament, playing in the NCAAs, it was something that our players absolutely enjoyed,” O’Boyle said. “And it was incredible for them. And they know that it wasn’t easy for us to get there. So when they came back in June, there was just an energy of them wanting to get better.

“So, in the gym on their own. In practices. It was fun to see. I think they really wanted to get after it.”

It’s a mindset, O’Boyle said. One that could be of big value in the season ahead.

The Rams, she said, don’t want to try to recreate last season per se. But they do want to build on the experiences that were earned during that time.

“And also knowing, ‘Hey, we went through a lot last year.’ And it was never easy for us,” O’Boyle said. “You had to earn it, and to keep that mentality that every day you’re going to get better. We’re going to build on this, and we’re going to go after another championship this year.”

The Rams began official preseason practices on Oct. 1, and tip off their season at the Siegel Center on Nov. 12 at 6 p.m. against Middle Tennessee.

VCU received a big-time boost shortly after the loss to Indiana in San Antonio. The program officially announced just two weeks after that game that guard Taya Robinson, a former Huguenot star, would be back for an extra, fifth season afforded by the NCAA. The NCAA granted athletes an extra year of eligibility due to the COVID-19 pandemic.

After the season, Robinson chatted with the possibility about family, who posed that staying would provide the opportunity for her to obtain a master’s degree and get another year of play under her belt before pursuing pro opportunities.

Robinson told O’Boyle she was coming back the same way she told her she was committing five years ago — she shot O’Boyle a text. And, just like the commitment, an excited O’Boyle called her.

“I think she just has such an impact on our culture, and our younger players. ‘This is how you practice, this is how you lift, this is how you take care of your body.’ She’s such a great role model. So, it definitely had a significant impact, positive impact, on our team,” O’Boyle said of Robinson returning.

Heading into the offseason, O’Boyle put an emphasis on correcting things she picked up on toward the end the season, including lessons learned in the Indiana game. The Rams wanted to stress improving from a strength standpoint and bettering their finishes through contact to contend with opponents who are more physical.

She feels the fact that the program has been able to add male practice players back to the mix this offseason has been beneficial in coaching physicality. VCU didn’t use the practice players, who are general VCU students who tried out to be part of the practice squad, last season because of COVID-19 protocols.

The Rams’ top two returning scorers beyond Robinson are sophomore Sarah Te-Biasu (10.8 points per game) and senior Janika Griffth-Wallace (7.0). And they’re two who have impressed O’Boyle over the offseason, too — two she tabs as breakout candidates this season.

Te-Biasu stepped in as VCU’s starting point guard as a true freshman, and O’Boyle has seen strides in her leadership. Te-Biasu also went to work on her midrange shot and her on-ball defense.

“I can see the improvement,” Te-Biasu said.

Griffith-Wallace has been very active defensively during the summer and fall, O’Boyle said.

For the Rams, the preseason now is about building, O’Boyle said. In every aspect, from defending — which Robinson believes will be a team strength again — to executing in the half court offensively.

And, as their A-10 title defense awaits, the experience of last season has informed them on what it takes to win — it’s not going to be easy, Robinson said.

It’s driving them, with a new season just over the horizon.

“We have to work 10 times harder because we are looked at as returning champs,” Robinson said. “So people are going to give us their best effort. So we got to come harder. Like, it’s not going to be easy.

Maryland denies UVA lacrosse revenge, and a shot at a three-peat, in NCAA blowout

COLUMBUS, Ohio — Virginia lacrosse had two months to stew over an 11-goal regular-season loss to Maryland back in March. This one, they’re stu…

'These are the moments you dream of': Virginia Tech softball wins three straight for regional title

BLACKSBURG — The Virginia Tech softball team was two outs away from beating Kentucky and advancing to the NCAA regional finals.

VCU Coach Beth O'Boyle talks to the Rams during a timeout as they play Dayton in the Siegel Center in Richmond, Va., during the Atlantic 10 Tournament semifinals Saturday, March 13, 2021.