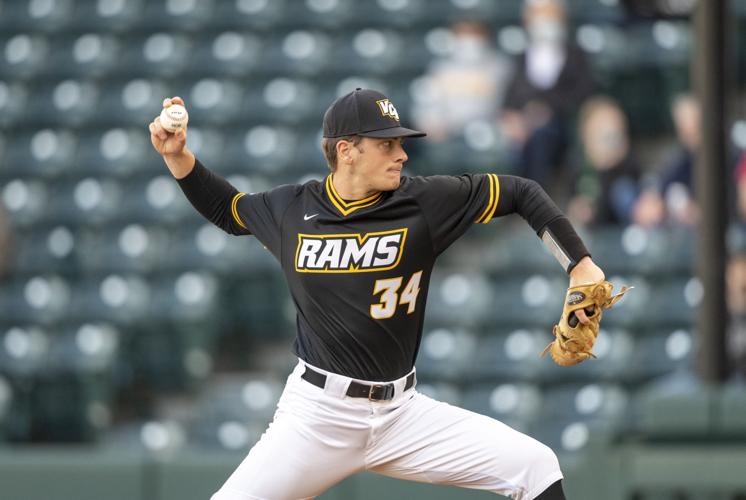 “I’ve been blessed all my life, and that’s just a testament to people who care about you and love you and want to see you succeed.” 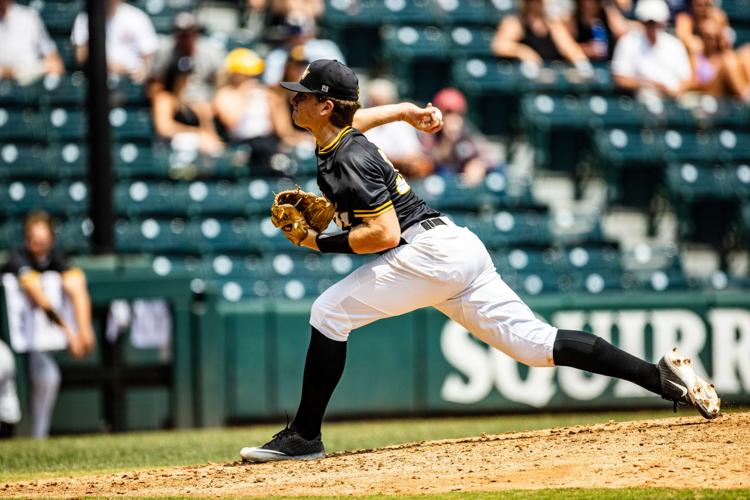 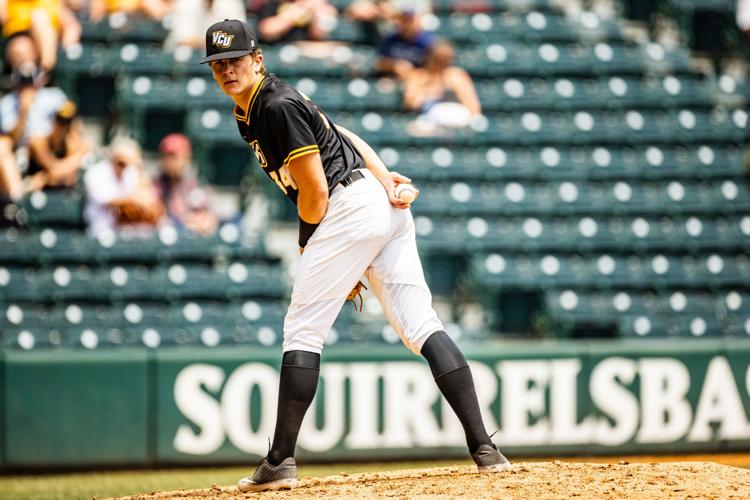 Pitcher Bradford Webb is taking his talents from VCU to the Texas Rangers’ organization as a seventh-round draft selection.

Coach Jeff Kinne is not sure if “raw” is the right term to describe pitcher Bradford Webb’s baseball talents when he arrived to play for him as a freshman at Hampden-Sydney.

Webb could throw, Kinne said. But he was just behind in his pitching development at the time.

In any event, as Webb sees it, “raw” would be a very generous way to describe the status of his game when he began his career with Hampden-Sydney, a memory that elicited a chuckle.

He was about 75 pounds lighter, and his velocity topped out at a mark some 15 miles per hour slower than it does now.

“It was a rough time,” Webb said. “I was small. I didn’t lift weights. I didn’t know a lot about the development process. So it was definitely a journey.”

That journey began from the ground up, said Kinne, who has coached Hampden-Sydney for 18 seasons.

Webb got into the weight room, and the coaching staff worked with him on strike throwing and velocity, and then on his secondary pitches, and then on fielding his position. Kinne saw “huge strides” in Webb his first year.

By his junior season, Webb was flourishing, having fun on the mound. But that year was abbreviated because of the COVID-19 pandemic. And Webb graduated early in three years.

As the Charlotte Court House native turned his attention to graduate school, VCU was top of the list. He wound up earning an opportunity to walk on for the Rams this past fall as a graduate student. His continued growth helped him carve out a spot in VCU’s rotation.

He shined there, recording a 3.16 ERA over 17 outings, 14 starts, with a team-high 57 strikeouts. He helped VCU roll to an Atlantic 10 title and NCAA tournament appearance.

Last Monday, Webb’s big year netted him a selection in the seventh round of the MLB draft, 194th overall, by the Texas Rangers. He was the Rams’ highest draft pick since Scott Sizemore in 2006.

And his journey will continue, from Division III Hampden-Sydney to Division I VCU to pro.

“I would put no limitations on Bradford Webb,” VCU coach Shawn Stiffler said. “He just works nonstop, he’s a constant learner. He’s constantly driven to get better. I think he’s just scratching the surface of his talent, which is probably what the Texas Rangers saw.”

Kinne first saw Webb at a lesson at RISE Baseball in Midlothian. James Bierlein — RISE Baseball’s director of baseball operations, lead pitching instructor and team training instructor — was teaching and told Kinne that he thought Webb was going to be exceptional one day.

The next summer, Kinne watched Webb again at a RISE Baseball camp. He saw potential.

“His arm action was really good, I thought there was something there,” Kinne said.

Still, the right-hander faced a lot of work t when he got on campus. But as Stiffler saw later, Kinne witnessed that Webb was a “tremendously” hard worker and a good learner.

Webb began to close for the Tigers as a freshman. They then tried to start Webb his sophomore year, but it didn’t go well, Kinne said, because he needed much work on his secondary pitches.

Behind the scenes, Webb said the Hampden-Sydney staff was instrumental in teaching him how to use the lower half of his body to generate power.

Coming out of Randolph-Henry High School, Webb’s maximum velocity was about 80 mph. But he added to it through work and said he’ll never forget when he touched 90 mph for the first time, during a fall intersquad scrimmage his junior year.

Webb closed for Hampden-Sydney in the shortened 2020 campaign that followed, and registered a 1.29 ERA in seven innings, with 11 strikeouts.

Webb wanted to keep playing baseball, and his plan from the beginning was to go to VCU, which had the graduate program he wanted, in global marketing.

“I pretty much cold e-mailed Coach Stiffler and [assistant coach Mike McRae], like, ‘Hey, I know y’all don’t know me from Adam, but I’m coming up, I might want to play,’” Webb said.

It also happened that Webb played on the same summer team last year as VCU catcher Hunter Vay in the Piedmont Collegiate League, the Lakeside Sluggers. Vay told Stiffler that Webb had a chance to fit in with the Rams.

VCU invited Webb to join the squad in the fall.

“Had a very good arm, athletic delivery,” Stiffler said. “But the biggest thing was he was just such a good teammate and good person to be around. That making those adjustments seemed very, very easy for him because of that.”

McRae at first worked with Webb on speeding his delivery, which helped him tighten his breaking ball. Webb began to throw his breaking ball harder, Stiffler said, which gave him something to toss when behind in the count. That also opened the door for him to throw his fastball more aggressively.

Webb got better each week, Stiffler said, from the fall through the season. And after pitching out of the bullpen his first three outings of the year, he rooted himself into the rotation.

“It’s awesome,” Webb said of his year. “I’ve been blessed all my life, and that’s just a testament to people who care about you and love you and want to see you succeed, and put in time and effort.”

VCU went on a 22-game win streak, including the A-10 tournament final and its NCAA regional opener.

Leading up to the draft, Webb tried not to get his hopes up, he said. He’s continued to tinker with his game on campus at VCU. And he was at work, delivering furniture, when he got the call last Monday from the Rangers that he had been drafted.

No Ram had been picked higher since Sizemore went in the fifth round, 142nd overall, 15 years ago. Sizemore, an infielder, played in 166 major league games. Right-hander Danny Watson joined Webb as a draft pick this year, in the 15th round, 453rd overall, to the Yankees.

Kinne said it’s pretty amazing to see Webb’s trek, from where it started with him at Hampden-Sydney to MLB draft pick.

“There’s kind of no other way to put it that, four years ago, this was kind of the last thing we would’ve expected,” Kinne said.

But now it’s reality for Webb, who in the days after he was picked began packing his bags and mentally preparing for the beginning of his pro career. His biggest aim is to take advantage of the resources and knowledge the Rangers’ organization will provide him to continue to sharpen his game.

A steady four-year progression has taken him this far. Webb has a chance for much more in the years to come.

“Whatever they give me, and whatever assets the good Lord has given me, I’m going to take all of that and make it the best that I can be,” Webb said. “There’s not going to be anything left in my bank when I’m done. I’m going to be giving it 100% of what I got.”

The Atlantic Coast Conference office is moving to Charlotte next year, preserving the league’s North Carolina roots but departing the city of …

At some point during the sold-out, season-opening game, someone entered Tech’s locker room and took some of the players’ personal items. The total value of the items was less than $8,000.

For JMU, App State could serve as FCS-to-FBS model

For JMU, App State could serve as an FCS-to-FBS model. The Dukes and Mountaineers meet for the first time at the FBS level on Saturday in Boone.

It contained all the moments a great comeback does. But the Virginia football team didn’t finish the job.

BLACKSBURG — The first thing Brent Pry does when he runs out of the Virginia Tech tunnel is take a look at the crowd. Size it up. See what the stage looks like on this particular day.

“I’ve been blessed all my life, and that’s just a testament to people who care about you and love you and want to see you succeed.”

Pitcher Bradford Webb is taking his talents from VCU to the Texas Rangers’ organization as a seventh-round draft selection. 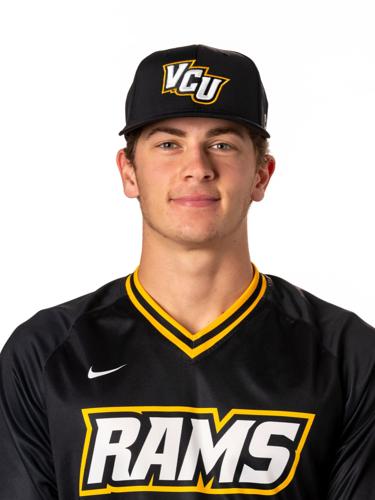 Worth noting: Was VCU’s highest draft pick since Scott Sizemore went to the Detroit Tigers in the fifth round in 2006; Webb finished 3-1 with a 3.16 ERA in 57 innings this season (14 starts, 17 appearances); pitched three years at Hampden-Sydney College.