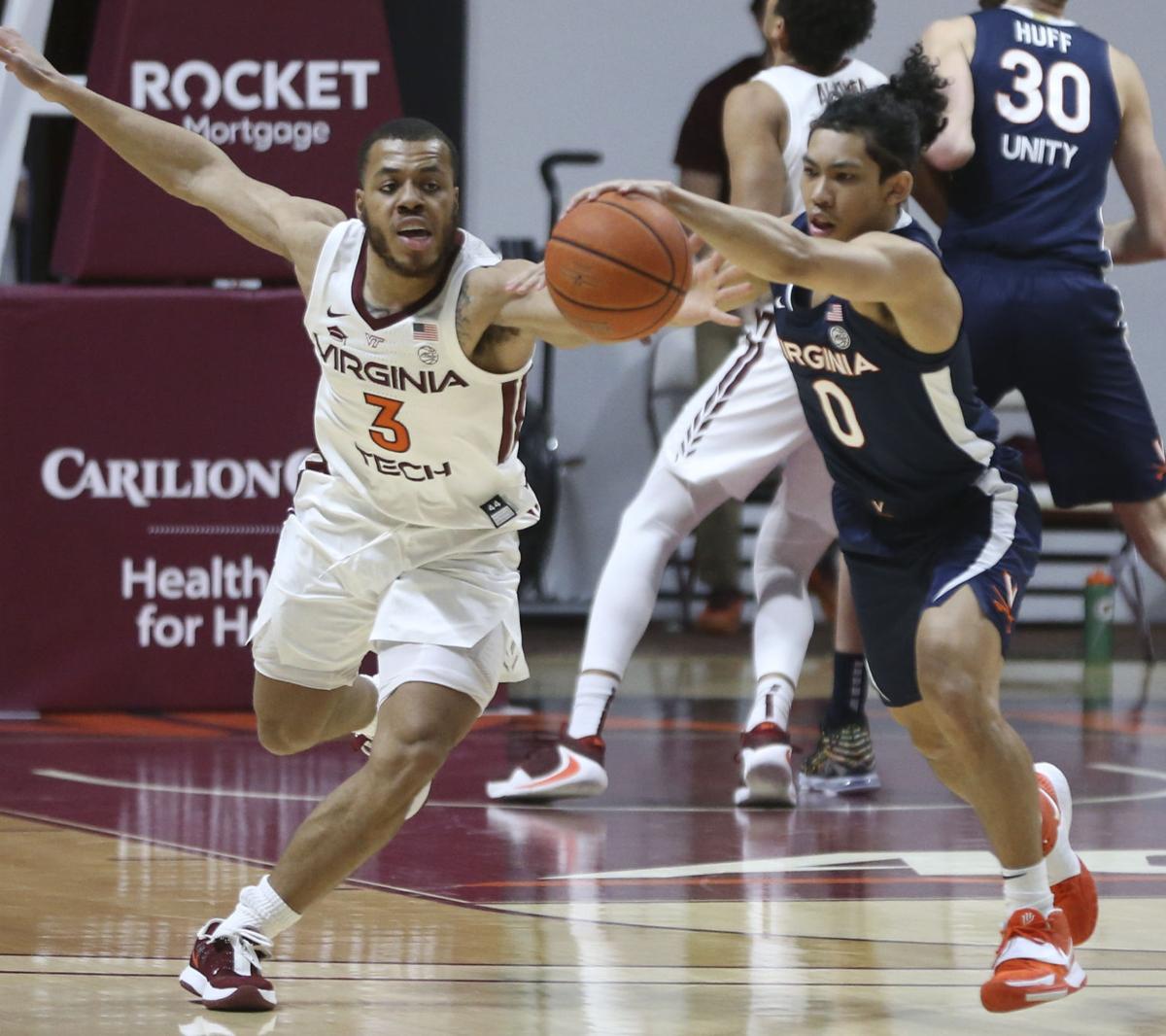 Virginia Tech’s Wabissa Bede (left) and Virginia’s Kihei Clark vied for a tipped ball in the first half of the Hokies’ victory over Virginia in Blacksburg on Saturday. Tech took control of the ACC game in the second half. 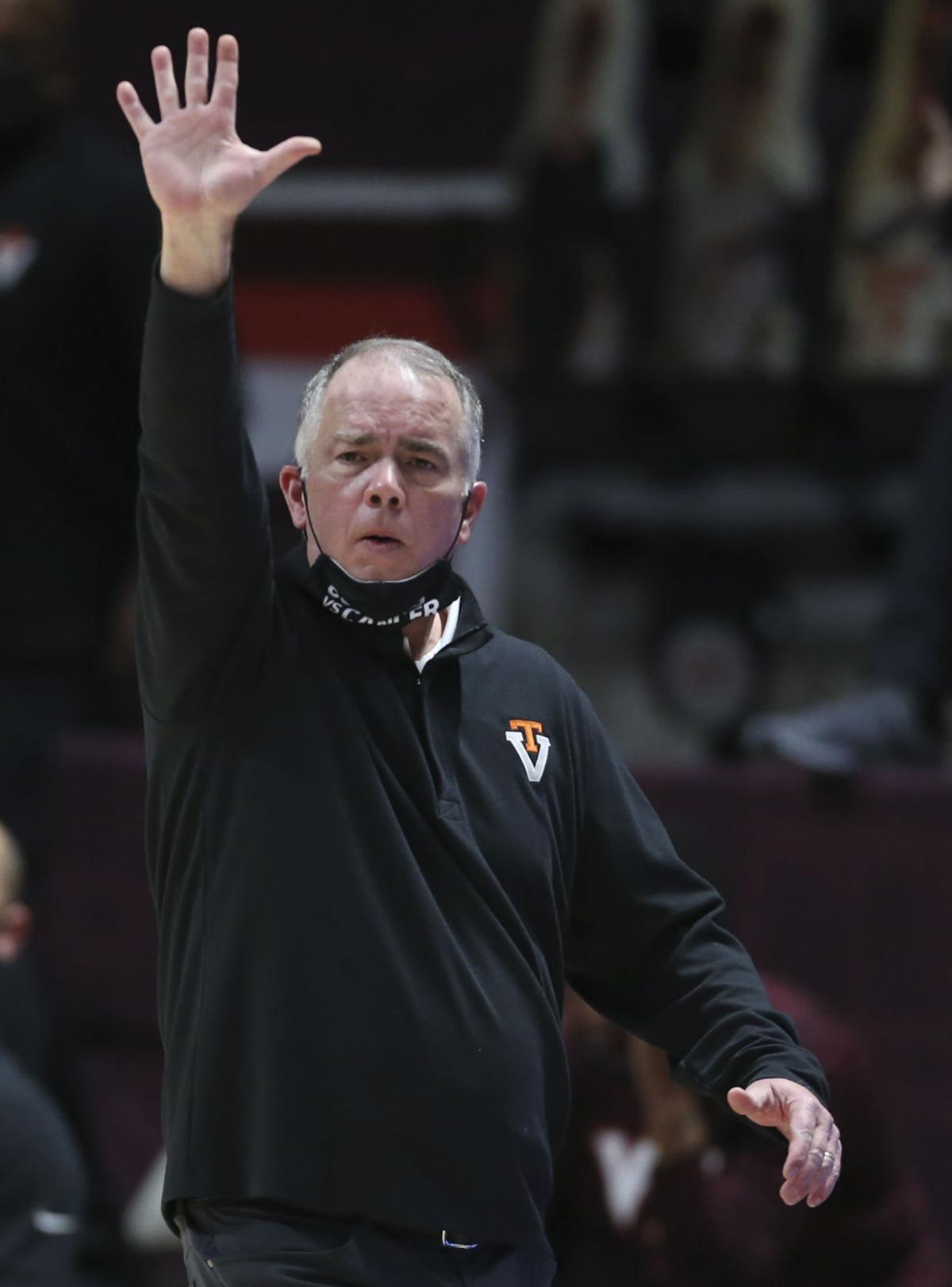 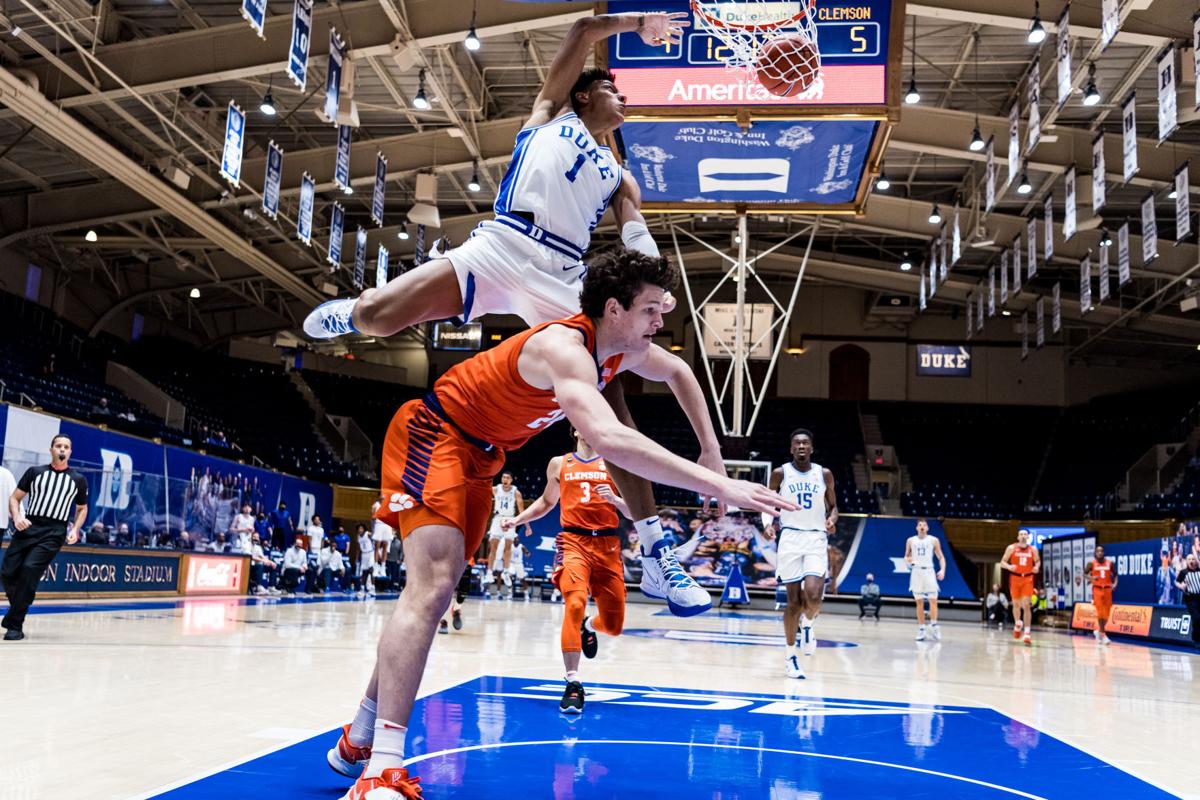 Duke’s Jalen Johnson finished a slam over Clemson’s PJ Hall in the Blue Devils’ 79-53 win over the Tigers on Saturday. Clemson coach Brad Brownell noted a drop in the Tigers’ fundamentals after a COVID-19 pause.

Before tipping off the college basketball season, Pittsburgh’s Jeff Capel III chatted with the school’s football coach, Pat Narduzzi, about playing through the COVID-19 pandemic. Among the challenges Narduzzi told Capel he would face was developing consistency from week to week and game to game.

“He said, ‘You’ll see it once you actually get started and you start playing games,’” Capel said. “And he was 100% right on.”

The ACC made it through the football season, though Narduzzi wasn’t the only one to note the lack of carryover from one performance to the next.

“One game doesn’t seem to be leading into another,” North Carolina’s Mack Brown, a College Football Hall of Famer who coached Texas to a national championship, noted in the fall.

Now, their basketball peers are experiencing a similar lack of consistency.

Only one ACC team has been able to put together a winning streak of more than five games. That was first-place Virginia, but the No. 14 Cavaliers’ run was ended by rival Virginia Tech on Saturday night.

Playing a schedule almost entirely of conference games, along with the challenges of teams either missing players, seeing games postponed or changed, or dealing with program shutdowns due to COVID-19 protocols have made a rhythm nearly impossible.

Clemson coach Brad Brownell noticed slippage in his team’s fundamentals after the program paused last month. He also noted coaches have to spend more time on the emotional well-being of players this year, time that previously had been spent on X’s and O’s.

“You’re probably doing more coaching of attitude and mentality and where’s your team?” he said. “You’re doing a lot of that. There’s a lot of individual meetings with players because kids are struggling with things that are not just basketball.”

Capel and North Carolina State coach Kevin Keatts said fans might get a skewed view of how comfortably players are navigating the pandemic when they watch games.

“It’s tough being a kid or an athlete right now,” Keatts said. “People don’t see that because when you flip on the TV, you just see the finished product. You see those guys who are out there playing. They look like they’re having fun. TV can trick you.”

The result of all that added stress, disrupted schedules and uncertainty has been inconsistent play for much of the league.

Virginia (11-3, 7-1 ACC) and Virginia Tech (13-3, 7-2) have been among the league’s more consistent programs, a big reason they sit first and second in the conference standings.

Tech coach Mike Young said his team hasn’t missed a practice yet, and UVA’s Tony Bennett noted his program handled its one full pause as well as could be expected, winning eight of nine, including seven straight before Saturday’s loss to the Hokies.

Eight of the league’s 15 teams have yet to win more than three in a row, and last-place Boston College hasn’t posted back-to-back wins this season.

Moreover, ACC teams have followed some of their biggest wins or win streaks with head-scratching losses.

Capel’s Pittsburgh team capped a three-game winning streak with a 79-73 win over Duke on Jan. 19, then dropped three in a row, two against Wake Forest and Notre Dame, two of the four teams in the league with losing overall records.

Louisville looked impressive in a win over Duke on Jan. 23, then lost at struggling Clemson four days later.

Florida State had won five in a row before losing 76-65 at Georgia Tech on Saturday.

Perhaps no team has been harder to gauge than Brownell’s Clemson squad. The Tigers opened the year 9-1, playing a stifling defense that was the best in the ACC for the first two months.

Then, a lengthy COVID-19 pause disrupted their momentum. When Clemson returned, it wasn’t competitive in a string of three blowout losses, falling by 35 to UVA, 18 at Georgia Tech and 19 at Florida State.

The Tigers appeared to have gotten back on track with a 54-50 win over Louisville, but was hammered by Duke 79-53 on Saturday.

“We lost our edge a little bit,” Brownell said. “I was worried about that and probably didn’t do a good enough job coaching it in the couple weeks coming out. … You kind of lose your fundamentals a little bit. If you’re not coaching that every day, there’s just drop off.”

Virginia Tech’s Wabissa Bede (left) and Virginia’s Kihei Clark vied for a tipped ball in the first half of the Hokies’ victory over Virginia in Blacksburg on Saturday. Tech took control of the ACC game in the second half.

Duke’s Jalen Johnson finished a slam over Clemson’s PJ Hall in the Blue Devils’ 79-53 win over the Tigers on Saturday. Clemson coach Brad Brownell noted a drop in the Tigers’ fundamentals after a COVID-19 pause.