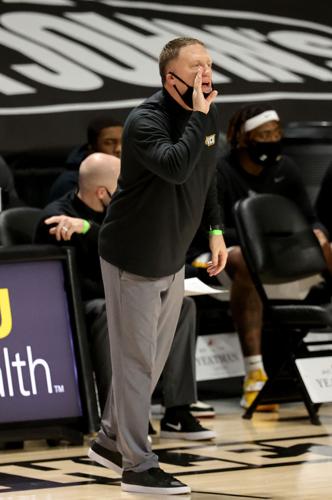 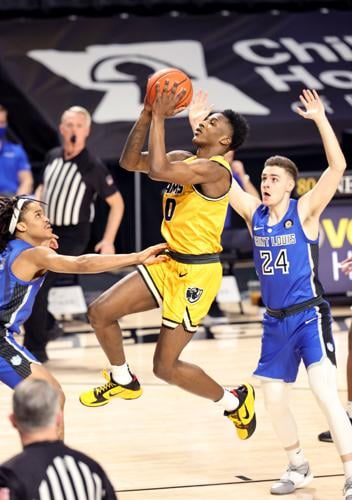 VCU's Jamir Watkins, center, shoots between Saint Louis' Yuri Collins, left, and Gibson Jimerson during the first half of men's basketball game at VCU in Richmond, Va., on Tuesday, Feb. 23, 2021.

For both, the injuries happened on routine moves.

In a session during the VCU men’s basketball team’s first week of practice two weeks ago, Jamir Watkins was taking part in a transition drill that’s a daily part of the Rams’ work. But he hurt himself when he gathered to finish at the rim.

Then in a practice last week, Levi Stockard III secured a steal in live play. He threw the ball ahead to Jarren McAllister. McAllister turned and drove toward the rim when he, too, was hurt.

“Both of them were sort of, not even the jump stops, more of a gather,” VCU coach Mike Rhoades said Tuesday. “And they were very similar.”

The diagnosis for both Watkins and McAllister was a torn right ACL, ending both players’ years early and putting a damper on the Rams’ preseason.

Watkins, a 6-7 wing, provided a notable spark off the bench for the Rams as a freshman last season and seemed to be in prime position to continue to break out as a sophomore.

McAllister, a 6-4 guard, had worked his way back from a left ACL tear that wiped away his 2020-21 season, and was excited to be back in the mix.

Now VCU is forced to move forward without both, for now.

“It just stinks,” Rhoades said. “And you get hit with an injury bug and I don’t feel bad for me. When you coach, you got to deal with this stuff. I feel bad for players, when they’re season-ending injuries, because they worked so hard to get to this season.”

The injuries to Watkins and McAllister added to the Rams’ offseason list. Returning starting point guard Ace Baldwin ruptured his left Achilles in May. Baldwin is expected to be back in early January.

Rhoades said that Watkins had successful surgery on his ACL last Friday, and is beginning rehab this week.

“For Jarren to deal with this back to back is just heartbreaking,” Rhoades said. “I mean, the kid, he’s a phenomenal kid. And the way he’s handled it, with grace, it’s the way he was raised.”

From a training standpoint, Rhoades said his players are doing the right things. The staff tries to make sure players are taking care of their bodies — getting rest, visiting the training room and using the cold tub, with the weight room mixed in.

And the team’s director of sports performance, Daniel Roose, has an ACL prevention program for players that is considered important because of VCU’s aggressive style of play — emphasizing knee, leg and hip care.

The Rams also don’t practice particularly long either, Rhoades said, also because of their play style.

Watkins averaged 7.2 points and 2.6 rebounds over 18.3 minutes per game in 26 appearances last season, picking up production as the season progressed. He started two games in February with Bones Hyland hurt, but otherwise helped off the bench.

He notched 14 points and 10 rebounds in his second start at Davidson on Feb. 27.

“We’re going to miss Jamir’s ability to score the basketball,” Rhoades said. “So, we’re going to have to do that by committee.”

Among guards who’ll take on bigger responsibility — in the wake of the Watkins and McAllister losses — are junior Washington transfer Marcus Tsohonis, senior KeShawn Curry and freshman Nick Kern.

“Nick has done very well,” Rhoades said. “He’s really picked some things up. And plays really hard. Our fans are going to really like how hard he competes. And so he’ll definitely have a lot of opportunity right from the start.”

It’ll be next man up, Rhoades said.

But after a tough couple of weeks on the injury front, VCU will miss Watkins and McAllister.

“It’s uplifting to me and our staff, about how both of these guys have handled it,” Rhoades said. “It just stinks.”

Even without Sam Howell, UVA and Virginia Tech's Coastal foe, North Carolina, expects to be strong on offense

CHARLOTTESVILLE – A year ago, despite the return of star quarterback Sam Howell, North Carolina football coach Mack Brown thought his team was…

CHARLOTTESVILLE – As defensive players and specialists jogged out of the indoor practice facility Tuesday evening, members of Virginia’s offen…

CHARLOTTESVILLE — The night before games, then-Clemson running backs coach Tony Elliott would give each of his players a handwritten note, a m…

The dialogue continued for UR's Chris Mooney and his Princeton coach, Hall of Famer Pete Carril

VCU's Jamir Watkins, center, shoots between Saint Louis' Yuri Collins, left, and Gibson Jimerson during the first half of men's basketball game at VCU in Richmond, Va., on Tuesday, Feb. 23, 2021. 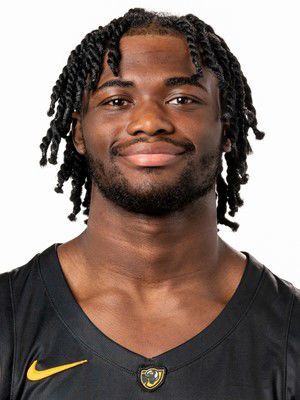 Jarren McAllister played in 16 games as a freshman, averaging 2.7 points.