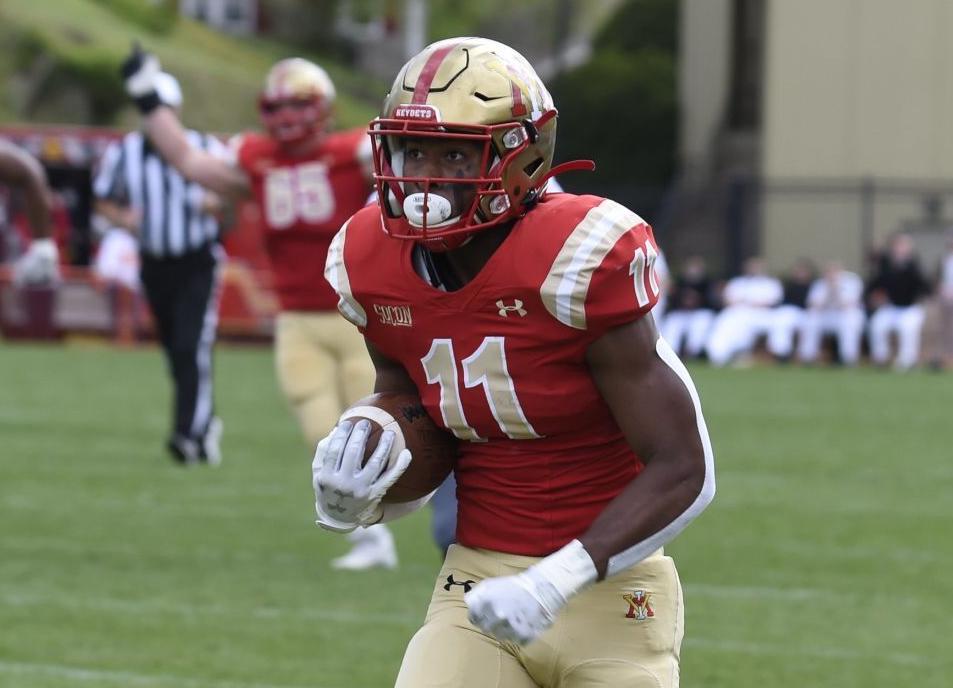 VMI’s Michael Jackson made six receptions for a career-high 140 yards and two touchdowns in last Saturday’s 37-34 victory over Chattanooga. 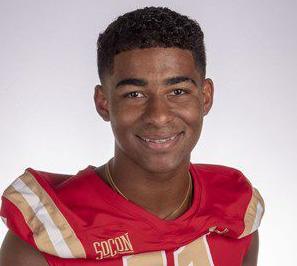 VMI trailed Chattanooga 31-24 last Saturday with 4:13 left. The Keydets called a timeout to determine their best shot on fourth-and-2 from the Mocs’ 29.

The ball went to receiver Michael Jackson, a senior from J.R. Tucker High. Down the left sideline, Seth Morgan lofted a pass toward Jackson, who reached back for the ball and made the catch above the head of cover man Camiron Smith at the 7.

“Once I came down with it, I was just looking for the end zone,” said Jackson, who scored in this critical sequence of a game that was loaded with them.

VMI won 37-34 in overtime behind Jerry Rice’s five field goals. Once more, the Keydets had found a way to 30 or more points. They’ve done it nine times in their last 14 games dating to the spring-semester season in which VMI captured its first Southern Conference championship since 1977.

Notable about the Keydets’ scoring throughout 2021: They’ve done it with three quarterbacks.

Record-setting Reece Udinski, now a graduate transfer at Maryland, started the first five spring games, and then suffered a season-ending knee injury. In came redshirt freshman Seth Morgan, and in his first game, VMI won 36-31 at Wofford. The Keydets kept rolling behind Morgan through the spring, when they posted their first winning record (6-2) since 1980 and reached the FCS playoffs for the first time in program history.

When Morgan was unavailable because of injuries this fall, redshirt freshman Collin Ironside replaced him and led VMI (4-2, 2-1 SoCon) to a 31-21 win at Cornell and a 31-23 win at Wofford.

“They coach here that regardless if your [first, second, or third string], you’re only one play away from moving up the depth chart and being on the field. So we really prepare ourselves that way,” said Jackson, who made six receptions for a career-high 140 yards and two touchdowns in last Saturday’s victory over Chattanooga. “Everyone prepares as if they’re going to play in the game and builds that confidence each and every day.

“All three of them have some differences in their games, whether it be more inclined to run it sometimes, or how they maneuver in the pocket, or call plays. But all three of those quarterbacks who played are, in my opinion, more than exceptional and are winning quarterbacks. I think they’ve proven that every time they step on the field.”

Common denominators in VMI’s passing productivity have been Jackson, a 6-foot-2 185-pounder, and Jakob Herres, a 6-4, 225-pound senior who became a consensus FCS All-American in the spring.

“Me and Jake, we were the only two receivers in my class so we have a very close bond. We’ve been roommates all four years,” Jackson said. “He warrants a lot of double-teams at times, which helps us out.”

Typical offensive production and more may be required for the Keydets to win at Mercer (4-1, 3-0 SoCon) on Saturday. The Bears average 37.2 points behind Coastal Carolina transfer quarterback Fred Payton, and have lost only at Alabama (48-14).

VMI’s Air Raid offense played a part in Jackson’s decision to attend VMI. He knew that there would be ample opportunity to contribute as a receiver. The school’s military component eliminates many prospects. That wasn’t the case with Jackson, whose father served in the Air Force.

“I knew the structure of [the military],” Jackson said. “I knew that it would be beneficial to me in the long run because VMI has a way of making you remain focused. You have to be focused in order to make it through four years at VMI. I knew that would help me grow as a man just in general.”

College picks: Panel predicts UVA to win big, is split on the Hokies

VMI’s Michael Jackson made six receptions for a career-high 140 yards and two touchdowns in last Saturday’s 37-34 victory over Chattanooga.