About 100 protesters showed up Monday in downtown Richmond. More drove through in gun rights caravans. 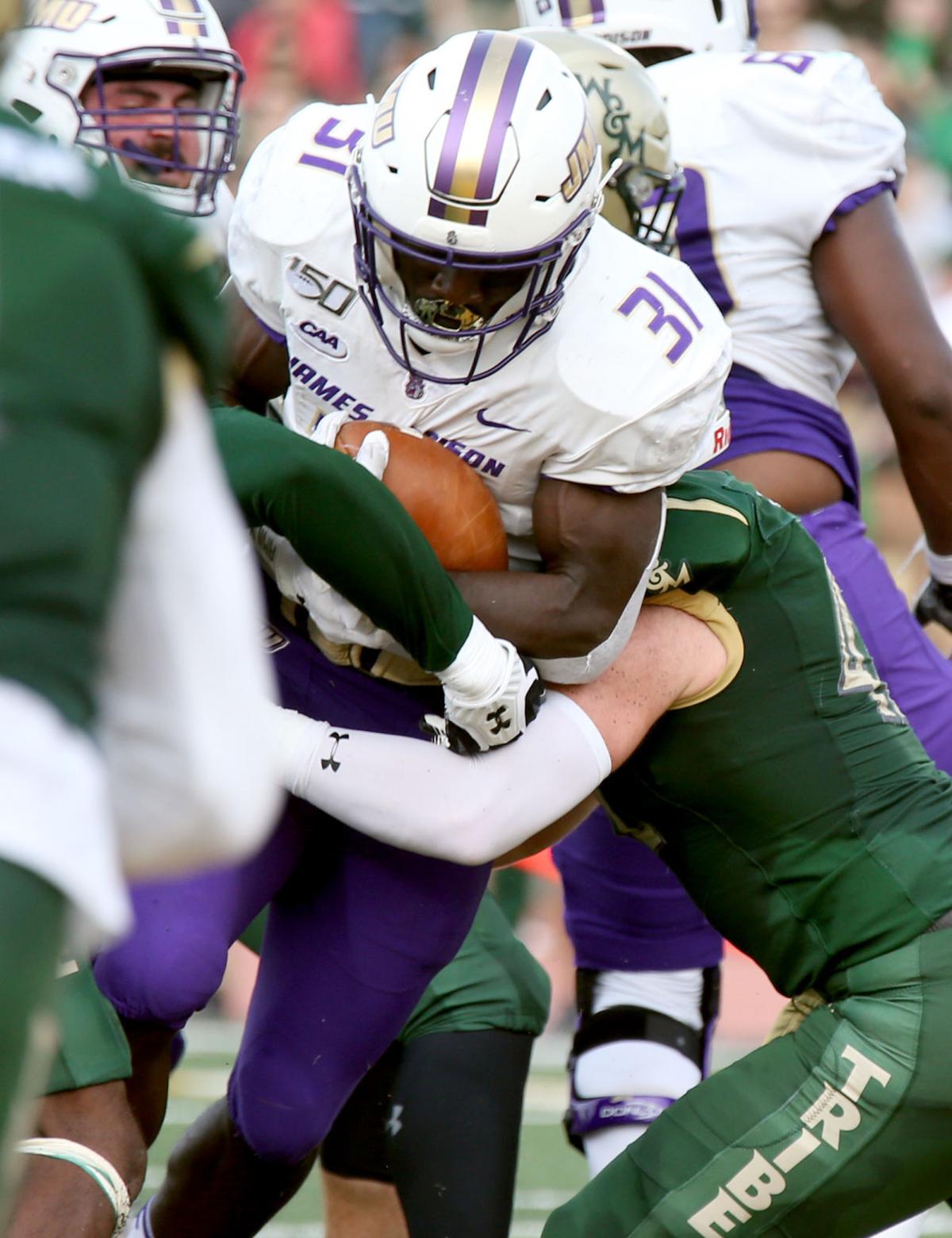 JMU’s Percy Agyei-Obese(31) pushes for a touchdown against W&M during the first half of the college football game at College of William and Mary in Williamsburg on Saturday, October 19, 2019. 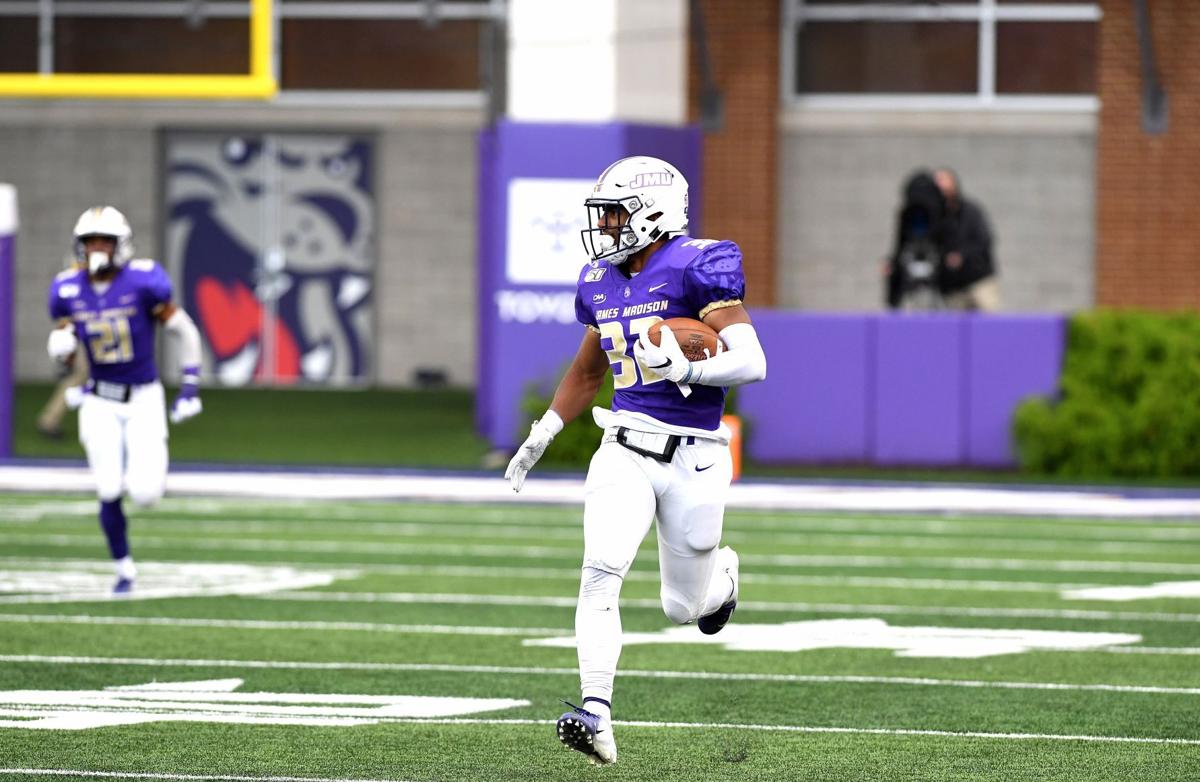 MJ Hampton returned an interception 83 yards for a TD in the fourth quarter against Villanova last season. He’s expected to play a larger role this year.

On a James Madison football team that’ll see players stepping into new roles all around the field, on both sides of the ball, there’s one position group that is enjoying almost complete continuity.

In the Dukes’ running back room ahead of the 2021 spring FCS season is 77.4% of the team’s rushing total last season. JMU collected 242.9 total rushing yards per game last season, which ranked 10th in the country.

There’s five backs who touched the ball in 2019 back, including four of the team’s top five rushers a year ago.

On top of the consistency in personnel is continuity in staff. Coach Curt Cignetti is completing his second full calendar year at the helm, as are offensive coordinator Shane Montgomery and running backs coach Matt Merritt.

“That’s big for our room,” senior running back Percy Agyei-Obese said. “Just because there’s a lot of experience in the room now.”

“Everybody’s still motivating each other, the competition is still there,” Agyei-Obese said. “And everyone’s pushing everybody to do their best.”

From an individual standpoint, after enjoying a breakout season last year, Agyei-Obese said that this offseason he went back and reviewed the film and feels he still left plenty more yards on the field. He wants to cut down on missed gaps, and has been working on his hands, to be a bigger factor in the passing game.

He also has worked on his flexibility, doing yoga every day.

“During this whole offseason, I’ve definitely tried to take a whole ’nother step,” he said. “And I feel like I did take another step.”

JMU, across its offense, lost starters at all but four positions, including quarterback. So the wealth of experience within the group of running backs figures to hold much value, in terms of both production and leadership.

“Trying to bring everybody to be on the same page and just hold the standard of what JMU football is,” Agyei-Obese said.

Hampton set to get

his time as starter

Over the past three years, JMU’s MJ Hampton has bided his time.

The safety from Fredericksburg played mostly special teams his freshman and sophomore seasons. He got more time at safety last season, but still has just one career start.

However, the potential was apparent. And Hampton made a monster impression in a critical game last October, when he registered what turned out to be a game-winning, 83-yard pick 6 in the fourth quarter to help JMU beat fifth-ranked Villanova.

This year, with the graduation of Adam Smith and the transfer of D’Angelo Amos (Meadowbrook) to UVA, it appears Hampton will finally get his chance to be a full-time starter.

“MJ, to me, he’s an all-conference kind of guy,” Cignetti said.

Hampton, in addition to the pick 6, had 45 total tackles, two forced fumbles and four pass breakups in 15 games last year, including the one start.

As the Dukes prepare for the spring, the senior is getting time at both the free safety spot and the hybrid “rover” defensive back position.

Then senior Wayne Davis has been slotting in at strong safety. And sophomore Que Reid is another prominent safety option, who played in every game last year as a redshirt freshman.

Hampton said his offseason has been great. He missed winter workouts and spring practice last offseason while recovering from a grade 3 turf toe injury. But he said he’s added 10 pounds this year and — listed at 6-3, 183 — hopes to be at 200 pounds by the start of the season in February.

Though a bigger role figures to be ahead for Hampton, he’s not getting too comfortable.

“I can’t sit here and think, like, ‘OK, just because I played it last year that I’m just going to be given it this year,’” Hampton said. “I mean, still got to come out there every day, work as hard as anybody else. Overachieve everything, which I want to do.”

The Colonial Athletic Association on Tuesday revealed an unorthodox six-game spring schedule format. JMU will be part of a four-team South Division, and will play Richmond, William & Mary and Elon twice each.

The Dukes’ slate will begin with nonconference games against Morehead State and Robert Morris on Feb. 20 and Feb 27, respectively.

Both Agyei-Obese and Hampton said the schedule release adds to the team’s motivation as fall ball continues.

“We’ve been ramping it up every single day at practice,” Agyei-Obese said. “We’ve been excited. Now, our level of motivation goes from here to here. And I think everybody’s been excited about it.”

Facing a budget shortfall of more than $5 million as a result of the impact of the COVID-19 pandemic, JMU launched a special fundraising campaign called Dukes Unite at the beginning of October, that will continue through Nov. 7. In an update Wednesday, senior associate athletics director for development Cliff Wood said that the school has raised $300,000 cash, with another $150,000 pledged, through the campaign.

For first time since '86, CAA men's hoops title to be decided on campus: JMU welcomes event

For the first time since 1986, the CAA will crown its men’s basketball champion on a member campus. The league said Wednesday that the tournam…

CAA basketball begins this weekend, the start of a league schedule like none before in conference history. For the most part, teams will play …

JMU’s Percy Agyei-Obese(31) pushes for a touchdown against W&M during the first half of the college football game at College of William and Mary in Williamsburg on Saturday, October 19, 2019.

MJ Hampton returned an interception 83 yards for a TD in the fourth quarter against Villanova last season. He’s expected to play a larger role this year.