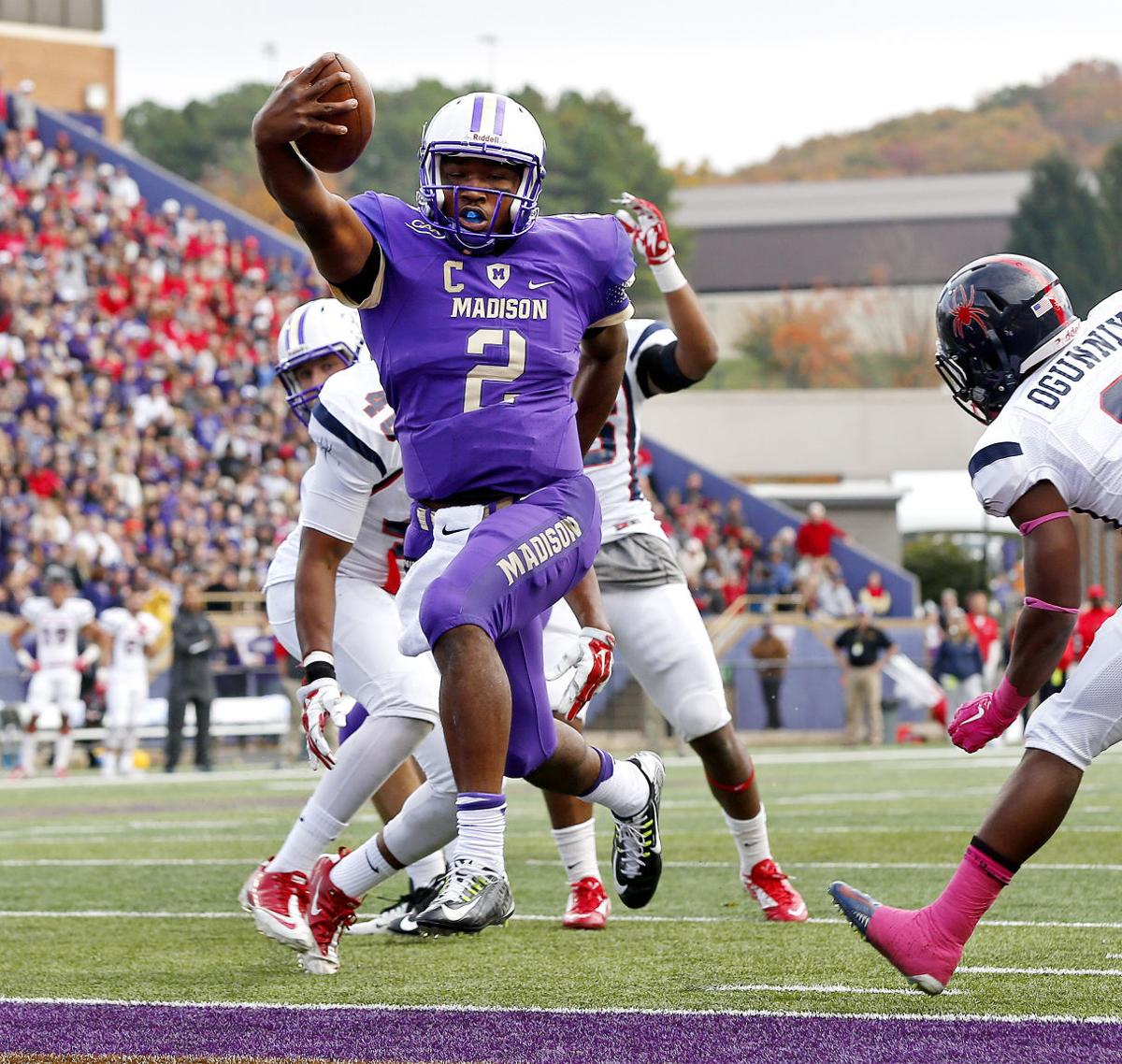 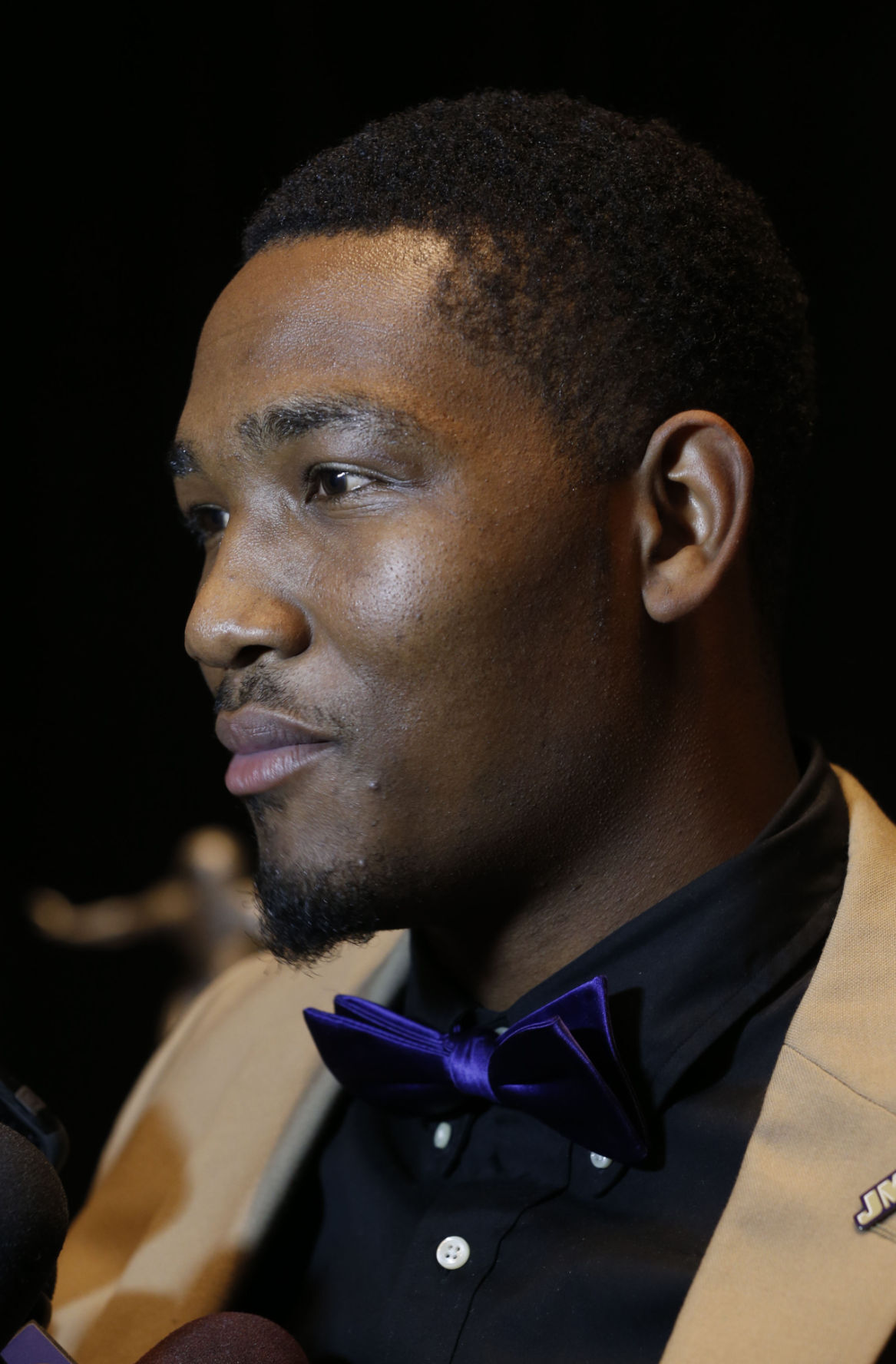 “I kind of wear a lot of different hats. But they all align in the same direction.” 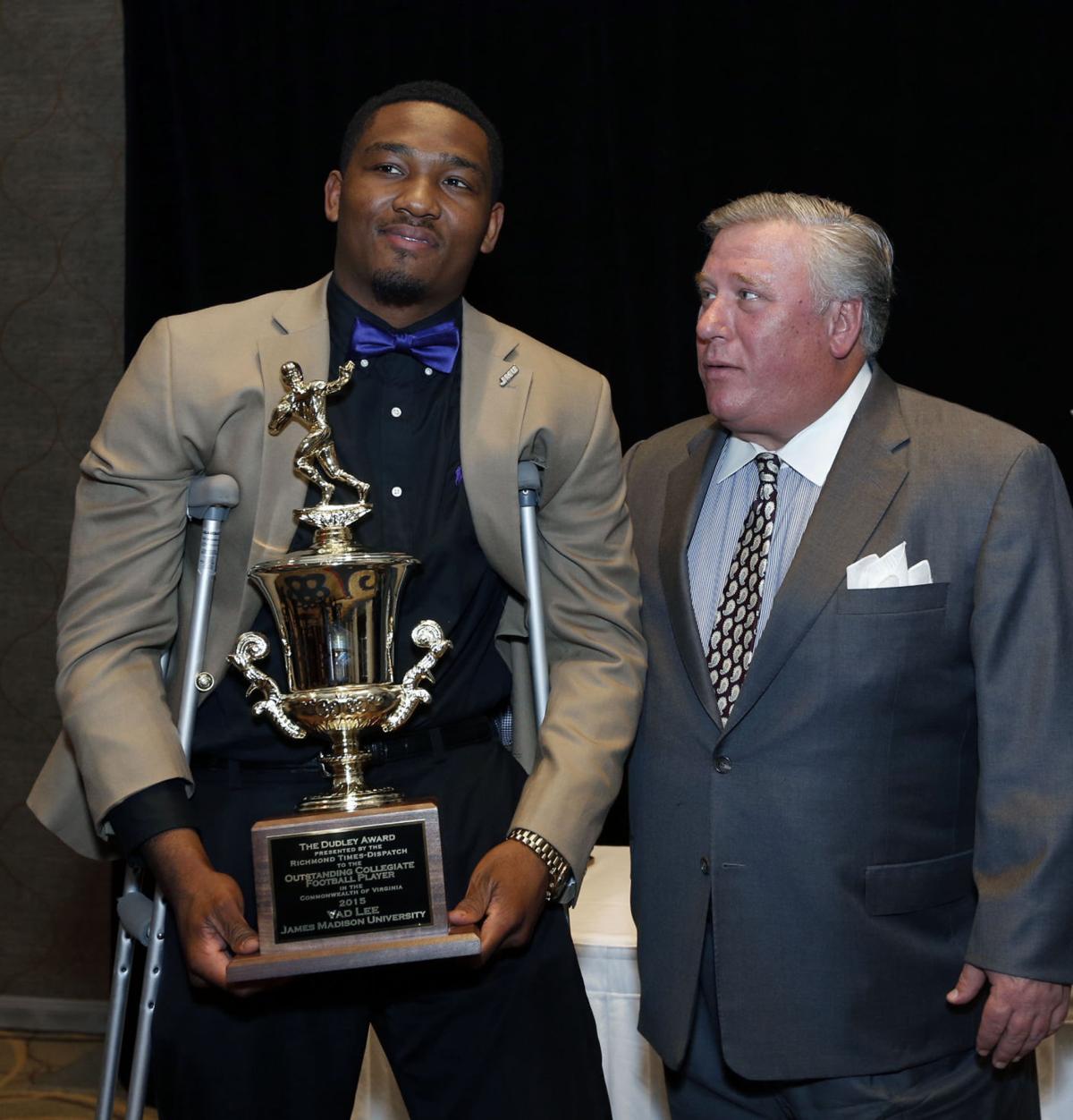 Vad Lee, quarterback for James Madison University, receives the Dudley Award from Jim Dudley, son of Bill Dudley, after whom the scholarship was named. Dec. 9, 2015.

Vad Lee believes his purpose in life is to build leaders. He’s been on that mission since he was a kid, it seems.

Growing up, the Durham, N.C., native always had two aspirations: to be a pastor and to be a professional football player.

The aims have driven him.

In football, Lee settled into a position that seems natural: quarterback. From that pedestal, he refined his leadership skills. The path brought him to James Madison, where he splattered his name on the record book during two seasons after transferring from Georgia Tech.

Lee’s college career ended with an injury. But out of the pain, his purpose grew stronger roots.

Since that time, five years ago, Lee has continued to pursue his purpose. The 27-year-old doesn’t confine himself to the original goals of pastor and professional football player anymore, preferring to let things “happen the way that God wants them to happen.”

Still, the post-JMU journey has intertwined the two in a lot of ways. From stints in the Canadian Football League and the XFL, to serving as the team chaplain at Indiana and character coach back at JMU, to preparing to publish a pair of books, Lee is fulfilling his purpose.

“I kind of wear a lot of different hats,” Lee said. “But they all align in the same direction. And that’s building up people and building up leaders toward a greater future and success.”

He walks the walk, too.

“I would say Vad is probably the best leader I’ve ever played with. On any of the teams that I’ve ever played on,” said Smith, a former wide receiver and cornerback who was a senior during Lee’s junior year. “Not only because of his vocal leadership, but he led by example.”

Lee, after three years at Georgia Tech, shifted to JMU, where he put up video game-type offensive numbers over two years. As a senior in 2015, and with his team rolling, Lee broke his left foot in an October homecoming game against Richmond. The injury ended his season and his college career, though he still was named Colonial Athletic Association offensive player of the year and won the Bill Dudley Award for the second season in a row.

Looking back now, Lee said the injury impacted his life in a major way.

“Because I realized that God was doing something greater outside of my position just as quarterback,” Lee said.

Lee became a sort of team chaplain after his injury. He remembers that he had surgery early in the week following the Richmond game, then had to prepare a message to say to the team ahead of the weekend game at William & Mary.

He was nervous at the time, but it was a defining moment.

“It’s pretty cool, because I’ve gotten so much better since,” Lee said. “I’ve given motivational leadership speeches and spiritual speeches since my experience at JMU.”

Lee graduated with a degree in public policy and administration in December 2015.

Football has remained in Lee’s life in various forms since JMU, starting with a stint with the CFL’s Saskatchewan Roughriders in 2016.

But a variety of off-field opportunities have kept Lee working toward his purpose, too. In 2017, he was back in Atlanta, where he married his wife Khayla that January, when he got a call that the Indiana football program was interested in bringing him on as its team chaplain.

The team flew Lee to its game at Maryland and Lee delivered a devotional in front of the team. That night, coach Tom Allen told him “we want you to consider being our chaplain.” Lee took the position, starting the beginning of 2018 and going through the season.

“It was a unique experience as my first time being in a position where I’m able to have influence not just as an athlete, but also to carry the word of God with me to share and to share the good news,” Lee said.

Lee in 2019 went to play with Your Call Football, a league where fans control which plays are run from an app, and his success helped set up his XFL consideration. He used the year to train for that, while taking up a position back at JMU, as the football team’s character coach. It was a part-time role and similar to that of a chaplain. Lee was there three times a week and for every game.

He went on to training camp with the XFL’s D.C. Defenders, but was released at the end. Dallas picked him up in March, before the season was halted.

Meanwhile, Lee’s wife Khayla was accepted to dental school at Howard in Washington, D.C. So he knew he was headed back to the D.C. area. He spoke with Chiccehitto, who was an offensive intern in Lee’s junior season at JMU and is now area director for Young Life in Fauquier County. Young Life is an organization with a mission of “introducing adolescents to Jesus Christ and helping them grow in their faith.”

Chiccehitto helped guide Lee to a new position as director of campus ministry with Young Life at the University of Maryland.

“It’s the same thing he did at JMU, and it’s what every great leader does, is he comes in and he doesn’t start directing people around,” Chiccehitto said. “But he comes in and he listens and he asks questions. He just gets to know his people under his care. And starts to teach them and train them in that way.”

Outside of his work in College Park, Lee in August revived a program he founded with Smith during their time in Harrisonburg, called Together Young Men Excel, or T.Y.M.E. for short. It began in 2014, when Lee and Smith would go to Skyline Middle School each week and have lunch with kids there, serving as mentors and big brothers to them.

It continued until Lee left Harrisonburg.

The restart grew out of a virtual quarterback training program Lee conducts. When that ended earlier in the summer, a parent mentioned that they wanted Lee to continue working with their kids.

So Lee rebooted T.Y.M.E. in a virtual way, every other week. There’s about 20 kids, from Florida to Virginia to Indiana.

“In being a leader, I’ve learned a lot about just how to really be the head of the team. And you can’t just be a leader, you have to be the leader. Like the guy who just takes charge and just leads your team through anything,” said 13-year-old Camden Langridge of Harrisonburg, who has participated in both T.Y.M.E. and the quarterback training.

As the year concludes, Lee is also looking at publishing a pair of books. The first, put together with his wife, is a children’s book called “That’s My Friend.” The book addresses racial conflict. The aim is for release this month.

“Being a part of the solution for us looked like writing a children’s book,” said Lee, who has two daughters, 3-year-old Saraiah and 1-year-old Sinaiah. “Because we believe that this young generation is going to be the generation that allows for growth and freedom in this conversation.”

Lee will also be publishing a book called “Purpose Over Position” at the end of the year. The theme has had meaning for Lee, including his career-ending injury at JMU, when his position was no longer starting quarterback but his purpose persisted.

“I really believe that message has the ability to transcend everyone’s life,” Lee said. “No matter what your position is, your kingdom purpose is so much greater than that.”

As Lee looks to the future, one goal is to become an established author. But mostly he’s taking it one day at a time. He’s not explicitly planning on continuing to play, but if a worthwhile opportunity presented itself, he would take a look.

Still, as his professional career has unfolded in other avenues, he can say he’s doing what he’s set out to do as a kid.

“I believe that God gave me a platform to be able to build up leaders in every community that I’ve been in,” he said.

HARRISONBURG — The first thing that catches the eye is all the purple.

HARRISONBURG — The first thing that catches the eye is all the purple.

On a JMU team that’ll see players stepping into new roles all around the field, on both sides of the ball, there’s one position group that is enjoying almost complete continuity.

“We can still reach all our goals as a football team. And it's never easy to do that. It's not."

JMU, UR, W&M will meet one another twice during CAA Football spring slate

Virginia’s CAA Football members — James Madison, Richmond and William & Mary — will get to know one another well during the league’s sprin…

“I kind of wear a lot of different hats. But they all align in the same direction.”

Vad Lee, quarterback for James Madison University, receives the Dudley Award from Jim Dudley, son of Bill Dudley, after whom the scholarship was named. Dec. 9, 2015.