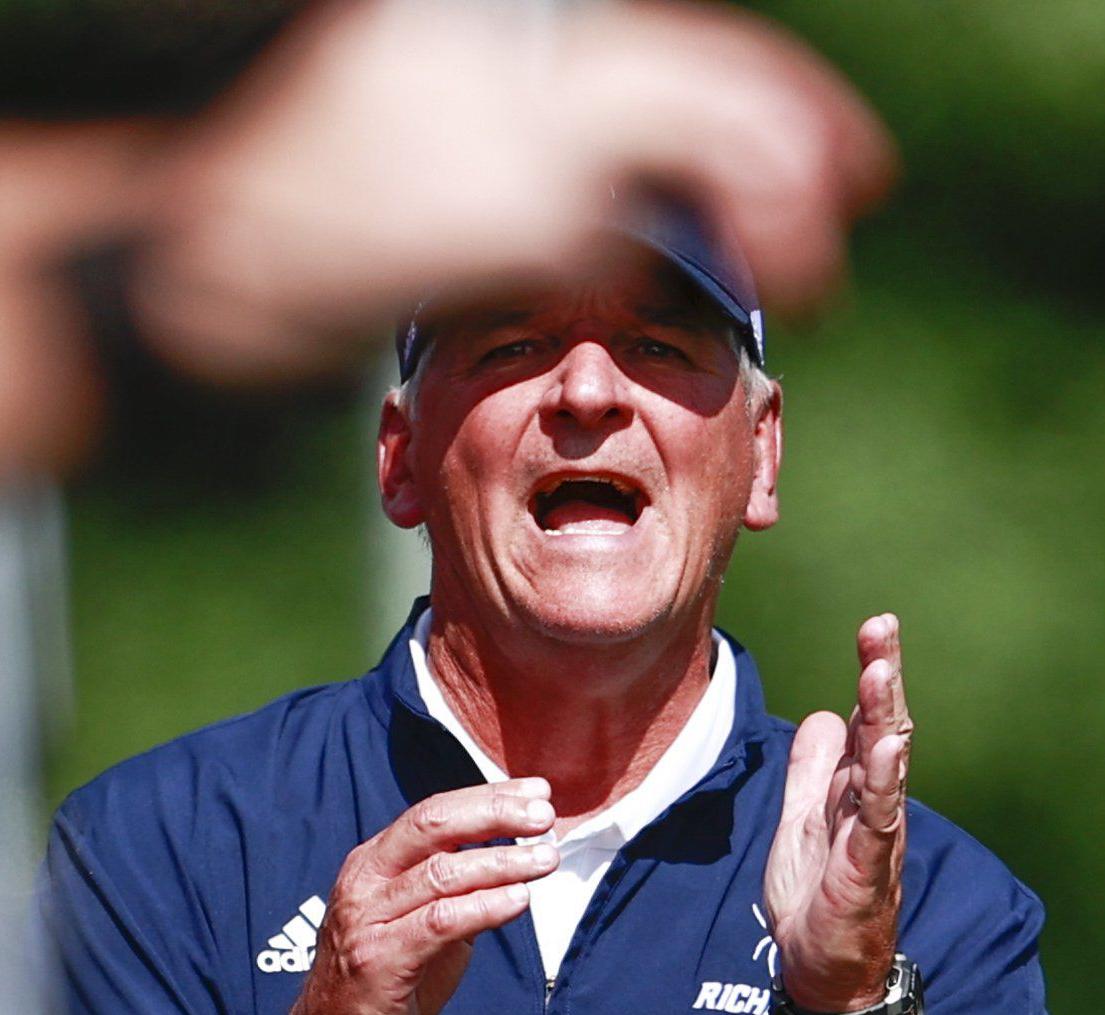 Richmond Spiders coach Russ Huesman, on spring-semester football: “We’ll see how that affects teams down the line here and how healthy they stay.” 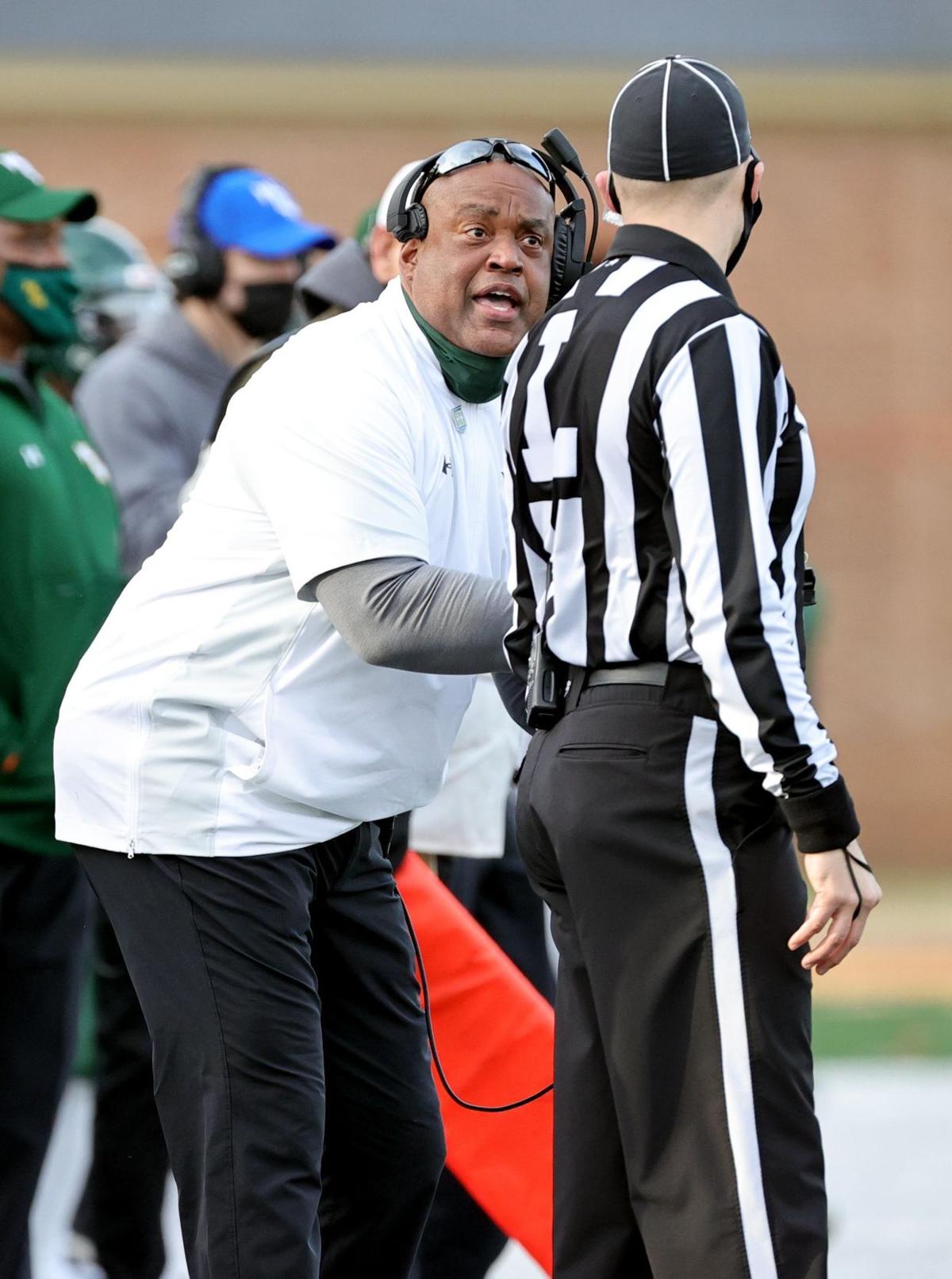 W&M’s head coach Mike London reacts to a call at the game against Elon during the second half of the college football game at the College of William and Mary in Williamsburg, VA., on Saturday, on March 20, 2021.

Some CAA football programs were interested in an extensive 2021 spring-semester season. Some were in favor of something significantly less. Towson chose not to compete at all.

Those differing paths may turn out to be relevant as CAA teams head into the final five weeks of the regular season and deal with the physical stress of playing as many as 19 games in a calendar year. There is the possibility of more than that for James Madison if it advances to the fall FCS playoffs.

“I do think some of the wear-and-tear on bodies is catching up,” Richmond coach Russ Huesman said Wednesday. “I thought it was a big concern. We’ll see how that affects teams down the line here and how healthy they stay.”

According to CAA commissioner Joe D’Antonio, athletics directors, not coaches, voted for a six-game CAA spring season with the option of two nonconference games. Huesman’s preference was four league games, zero nonconference games, and no FCS playoffs. He used many young players in the spring to reduce “wear and tear” on his veteran regulars.

“To play a full spring and be ready to play in the fall I don’t think is the best thing for these [play-ers],” Huesman said before the spring-semester season began. “I want a healthy football team in 2021, for sure.”

As it turned out, the pandemic’s effect reduced the number of spring games across the board. Richmond was slated to play only the six league games and ended up playing four. William & Mary played three of its six scheduled league games, and also scheduled no nonconference games.

“We should be at a strength in terms of player availability that we were at [as the season started]. After that, things started to fall apart. This game is unforgiving.”

The Dukes have already played 14 games this calendar year, with five more regular-season games remaining and, quite possibly, FCS playoff involvement after that.

“I think we’re in a good place right now,” JMU coach Curt Cignetti said Monday, speaking of the Dukes’ overall physical condition. “I think our guys are handling it well.”

Towson announced last October that the Tigers would not play spring-semester games, for safety reasons. According to Towson coach Rob Ambrose, his players provided the impetus with an eye toward staying healthy for the fall season.

“The true evaluation of this year will be done afterwards. I’m not trying to be trite,” Ambrose said. “But you guys got to add up the number of football games and number of practices that most of these players have had in the span of the entire year, and how that comes out in the wash in the fall.

“And I’d say that pretty much changes the balance of everything.”

When James Madison begins competition in the FCS playoffs, it will do so with the CAA’s offensive and special teams players of the year.

Saturday's JMU-W&M football game could be last for a spell, with nothing on the books

"If they’re moving up, they’re going to start buying people to come in and play.”

Spiders have experience with CAA postseason ban that JMU has encountered

"It was wrong then, and if that's the way a conference is going to react today, it's wrong now."

Richmond Spiders coach Russ Huesman, on spring-semester football: “We’ll see how that affects teams down the line here and how healthy they stay.”

W&M’s head coach Mike London reacts to a call at the game against Elon during the second half of the college football game at the College of William and Mary in Williamsburg, VA., on Saturday, on March 20, 2021.