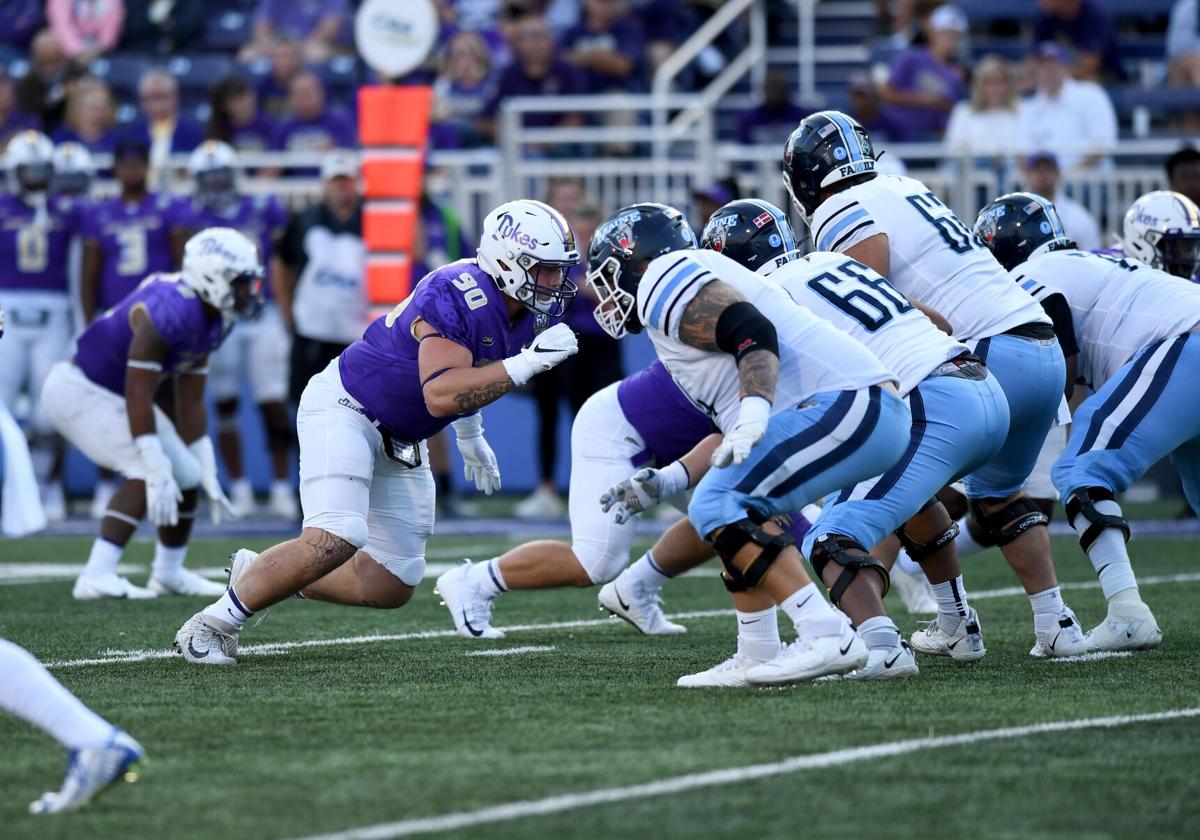 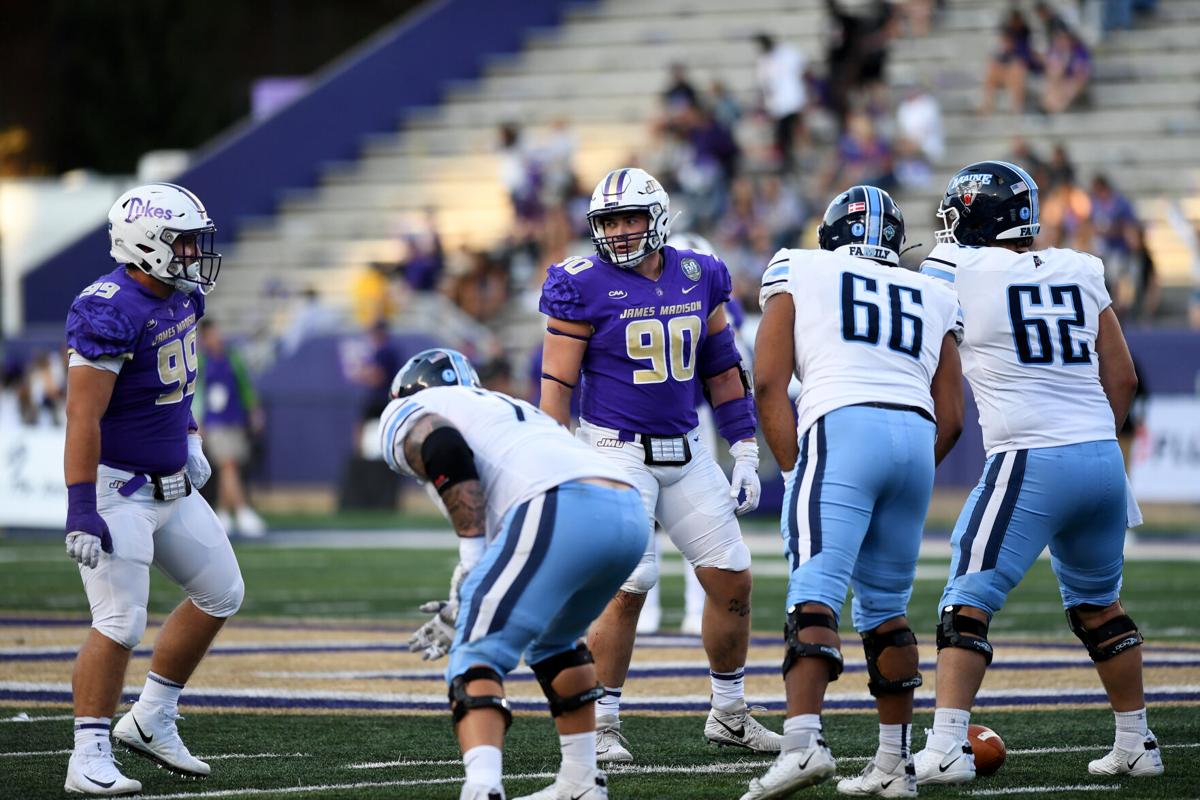 What tops one major play?

How about two in succession? Tony Thurston became acclimated on Saturday at Richmond.

The James Madison nose guard, on a Spiders possession to close the third quarter, followed his first career sack with another.

The takedowns came on second and third down to force a seventh UR punt in the Dukes’ 19-3 win.

“It’s always nice to get a nice big play,” Thurston said Tuesday. “And then it’s even better to get them back to back.”

The sacks were more notable considering Thurston played only about a dozen snaps Saturday because of an elbow injury.

But they indicated the way the 6-3 275-pounder from Louisa plays with a physical edge. And they were part of a career year for him as his role has steadily increased.

Thurston, in six games this year, has a career-high 16 tackles, with a career-high five tackles for losses, the two sacks and his first forced fumble.

He has helped JMU’s defensive line perform among the nation’s best.

“It feels good,” Thurston said of his play this year. “Being able to look back and see how much I’ve progressed over the years. Any type of improvement will make anybody feel better.”

Thurston has played football as far back as he can remember. He and his father, Tony Thurston Jr., bonded on the game. Tony Jr. grew up playing it, too.

Thurston, who played offense and defense through high school, developed an affinity for defense.

“There’s nothing better than playing on the defensive side of the ball,” Thurston said. “You can really just go do your own thing and let loose.”

He was featured on the defensive line at Louisa High, where, in addition to a list of football accolades that included VHSL 4A state defensive player of the year as a senior, he was a standout heavyweight wrestler. Thurston was a region champion in wrestling as a junior.

Wrestling helped develop his technique on the field, honing leverage and point-of-attack principles.

“Especially because D-linemen aren’t necessarily as big as O-linemen, so you got to learn how to use leverage to your advantage because the guy across from you is usually bigger than you,” Thurston said.

Thurston held offers from JMU, William & Mary and Chattanooga, but was drawn to Harrisonburg by the tight-knit locker room there that reminded him of Louisa.

He played in three games as a freshman before redshirting. Then he earned a more regular spot in the rotation in 2019, appearing in 10 of 16 games

That led to the 2021 spring season, when Thurston felt he came into his own. He started five of the six games he played in the Dukes’ eight-game schedule. He had 10 tackles and blocked a field goal attempt against Morehead State.

“Kind of puts a different perspective that you have guys looking up to you at that point,” Thurston said. “And you have to kind of show them that you’re a leader in an aspect of it all.

“You’re the first one going out on the field, and get to not only play for yourself but your teammates beside you and the guys under you. They’re all relying on you.”

Thurston has started four of six games this fall on a defensive line that’s helped JMU average 3.17 sacks (tied for 12th in the country and leads in the Colonial Athletic Association).

On the first of his back-to-back sacks Saturday, Thurston burst through a wide-open A gap and wrapped up UR quarterback Beau English to set up a third-and-11. On the next play, Thurston barreled through UR guard Cade Salyers to reach English again.

“I just went out there and did what I was supposed to do, and it ended up falling in my favor,” said Thurston, who also said his elbow injury is improving. “So, as a D-line, we’re expected to get those. So of course, I was happy, but I was probably more happy that I knew I was doing my job and helping out my team.”

JMU coach Curt Cignetti said Thurston, who is classified as a redshirt sophomore, has matured during his career to this point.

In a breakout year, Thurston had an outing to remember at Richmond. It only took two plays, too.

“I’m hungry to get more stats and more playing time and everything like that,” Thurston said. “So, it’s just a steppingstone.” 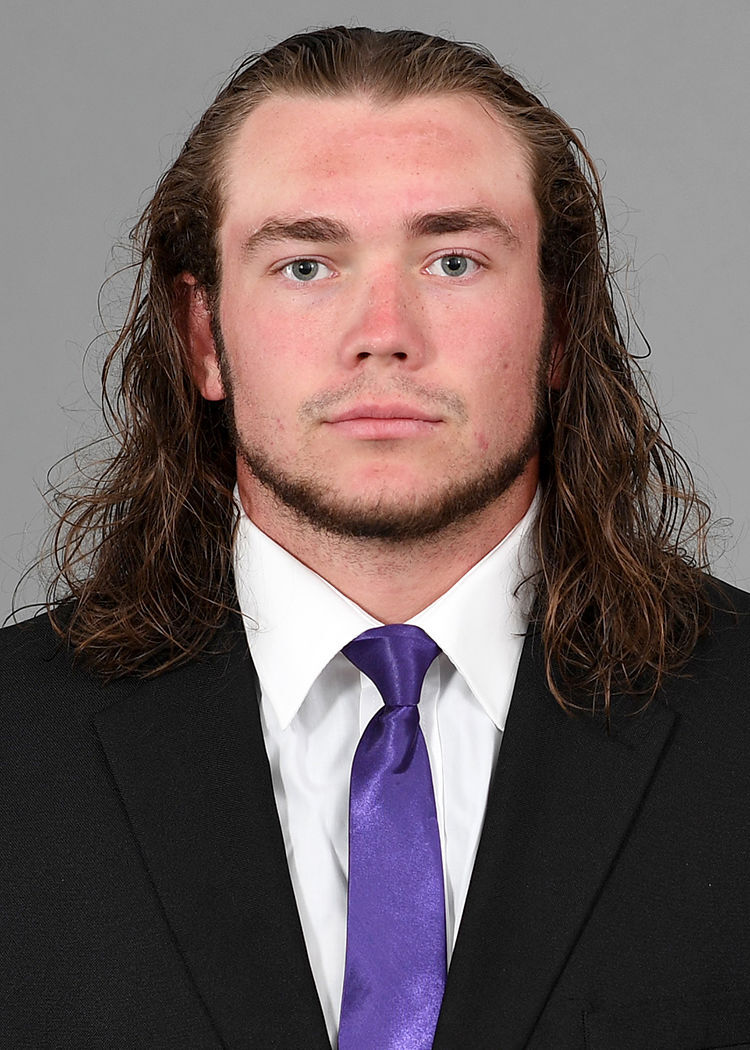