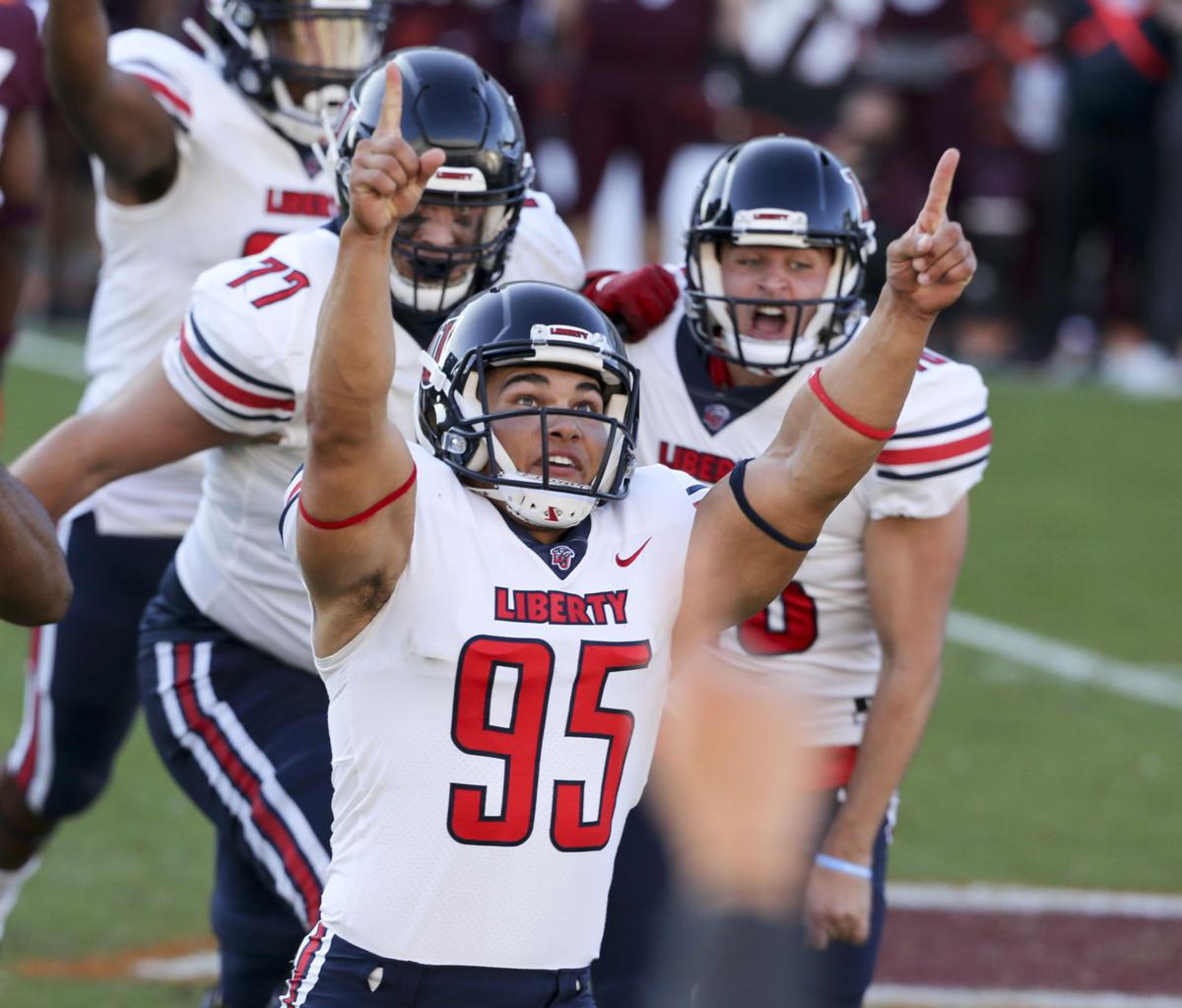 Liberty’s Alex Barbir (95) celebrates after hitting a 51-yard field goal in the closing seconds of the Flames’ 38-35 victory over Virginia Tech in Blacksburg. 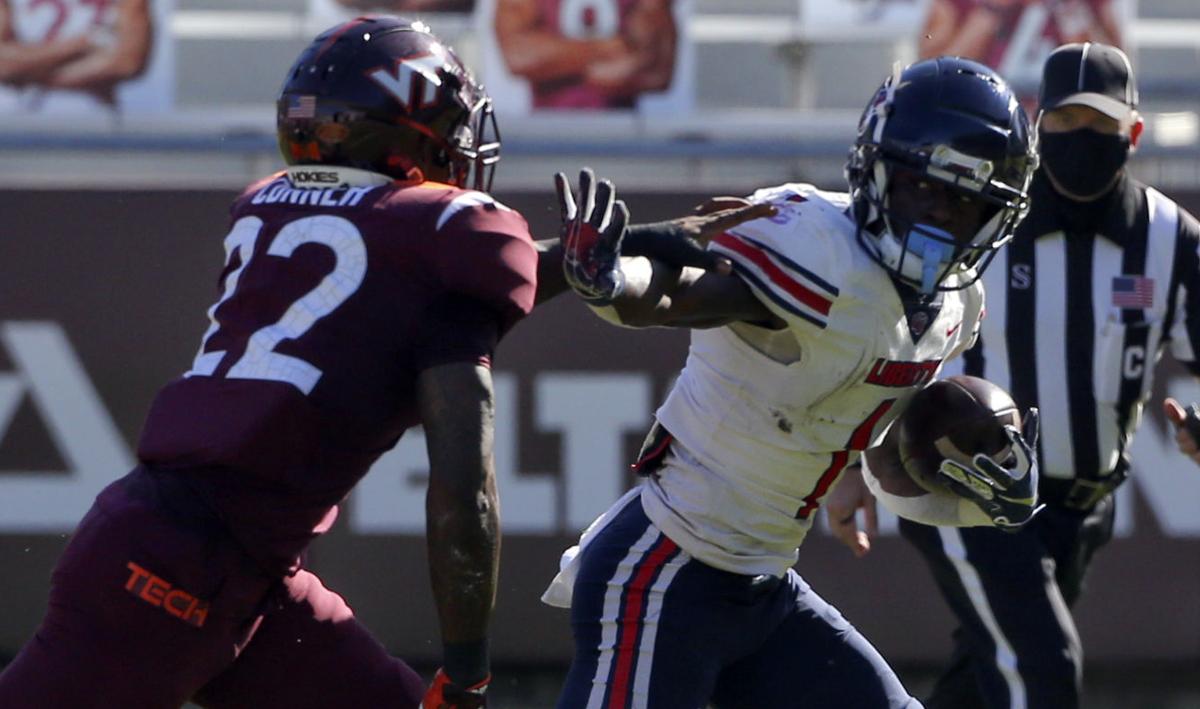 Liberty quarterback Malik Willis, an Auburn transfer, ran for 108 yards and completed 20 of 30 pass attempts for 217 yards and three touchdowns in Saturday’s win at Lane Stadium.

BLACKSBURG — In a sullen and shell-shocked Virginia Tech locker room, after an improbable loss to Liberty, Hokies football coach Justin Fuente apologized to his players for a timeout that went horribly wrong.

With 8 seconds left and the Flames lining up to attempt a prayer-in-the-breeze 59-yard field goal, Fuente yelled to the officials to call a timeout. By the time they blew their whistles, kicker Alex Barbir’s low kick had been stuffed by lineman Silas Dzansi, scooped up by defensive back Jermaine Waller and returned for an apparent score.

But the whistle did blow. The timeout had been called. The play that saved the day for the Hokies officially never occurred.

Of course, Fuente’s ill-fated timeout was far from the only catalyst for Tech’s first loss at home to a non-Power Five opponent since a 2014 loss to East Carolina.

An errant official’s whistle earlier in the game wiped out a likely defensive touchdown on a fumble by Liberty quarterback Malik Willis.

Wide receiver Tayvion Robinson’s fumbled punt return inside the 10-yard line set up the Flames’ fourth touchdown of the day.

On the play following the timeout-nullified block, Tech’s defense — anticipating a heave into the end zone — played back off Liberty’s receivers, allowing an 8-yard completion and setting up Barbir’s game-winner.

“[Coach] also mentioned how we shouldn’t have been in that situation anyways, which he’s right, completely,” safety Divine Deablo said. “We should have played a lot better.”

There was a time when Virginia Tech (4-3) could survive a few big mistakes in a nonconference game against a state opponent. Those times are gone.

Undefeated and nationally ranked, No. 25 Liberty (7-0) still went into Lane Stadium on Saturday as a two-touchdown underdog, doubted because of its weak strength of schedule to this point.

It left legitimized. And it left the home team reeling.

Willis, who had given Tech a recruiting commitment but instead went to Auburn, then transferred to Liberty, had his way with the Hokies. Willis threw for 217 yards and three scores. He ran for 108 and a touchdown. He helped put Tech in an early 14-3 hole.

Late in the fourth quarter, there was so little doubt Willis and the Flames could move the ball, Fuente opted to have his defense let running back Peytton Pickett score from 9 yards out, preserving more time for a response.

Pickett’s resistance-free touchdown left the Hokies down 35-28 with 1:41 to play. Time enough, it would turn out, for Tech’s Hendon Hooker to lead a masterly game-tying drive, only to see Liberty rally for the bizarre finish.

Hooker threw for 217 yards and three scores and ran for 156 and a touchdown, carrying an offense that played without star running back Khalil Herbert. Herbert, the ACC’s leading rusher, left the game with a hamstring injury after the opening kickoff.

Still, when Hooker found Tre Turner for a 12-yard scoring strike with 52 seconds left, then improvised a 2-point conversion with a late flip of the ball to Raheem Blackshear in the end zone, things were tied 35-35.

But not this time.

His 59-yarder shot low right into the mass of offensive linemen Tech uses in the middle of its kick-block team. Dzansi sent it ricocheting backward. Waller carried it to the end zone.

“I heard the whistle, but I thought it was an inadvertent whistle or I was just imagining things,” Hooker said. “I saw the block and I was thinking the game was over.”

Moments later, it would be.

UVA's game against Florida State has been postponed

For the second consecutive week, a Florida State football game has been canceled on game day.

Behind defense, VCU surges in second half to beat Utah State 85-69 in season opener

So, what exactly happened to allow VCU to turn the tide down the stretch of the second half against Utah State Wednesday night?

At No. 10 Kentucky Sunday on ESPN, Spiders embrace 'a once-in-a-lifetime opportunity'

With three games in three days, there’s not much time to dwell on the results of the previous contest. It’s on the next, and quick.

It was a dominant offensive performance for a team that struggled to score a season ago. It took Virginia until February last season to score 70 points in a game, and it only reached the threshold twice all season.

From Tennessee to South Dakota: How VCU landed in the Bad Boy Mowers Crossover Classic

From Tennessee to South Dakota: How VCU landed in the Bad Boy Mowers Crossover Classic:

Liberty’s Alex Barbir (95) celebrates after hitting a 51-yard field goal in the closing seconds of the Flames’ 38-35 victory over Virginia Tech in Blacksburg.

Liberty quarterback Malik Willis, an Auburn transfer, ran for 108 yards and completed 20 of 30 pass attempts for 217 yards and three touchdowns in Saturday’s win at Lane Stadium.