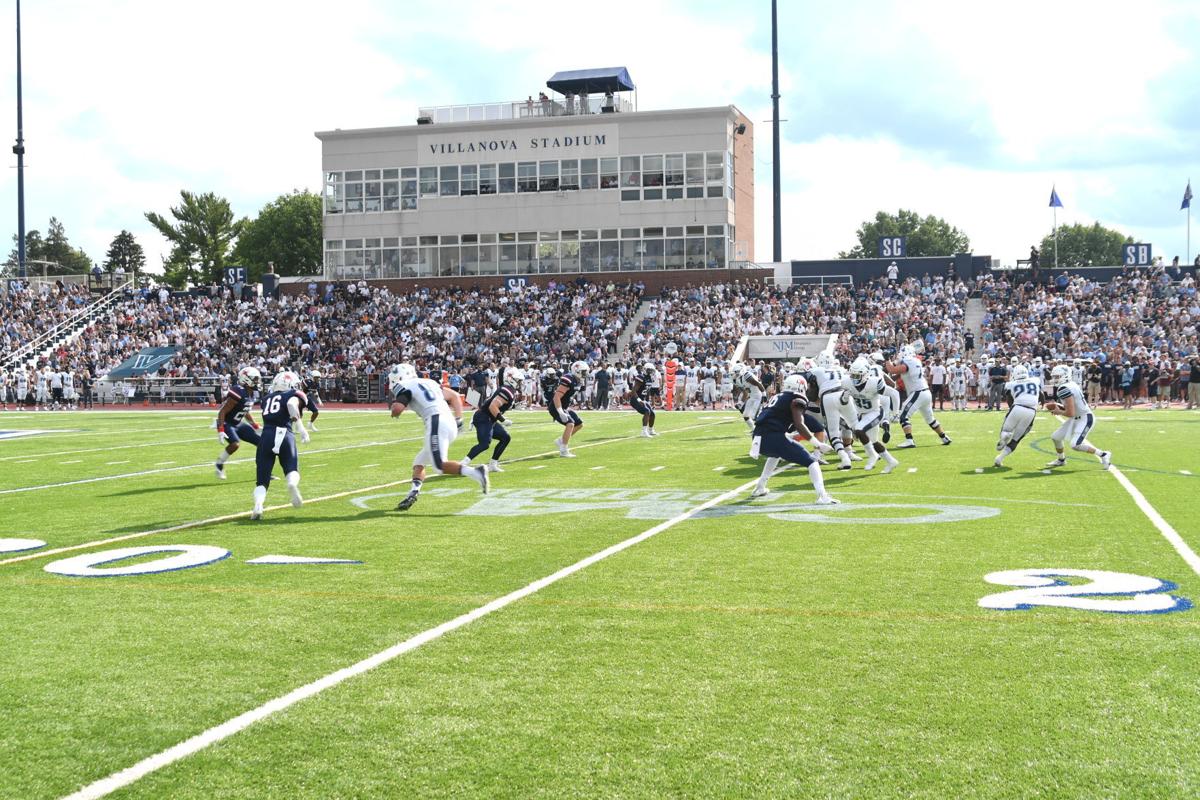 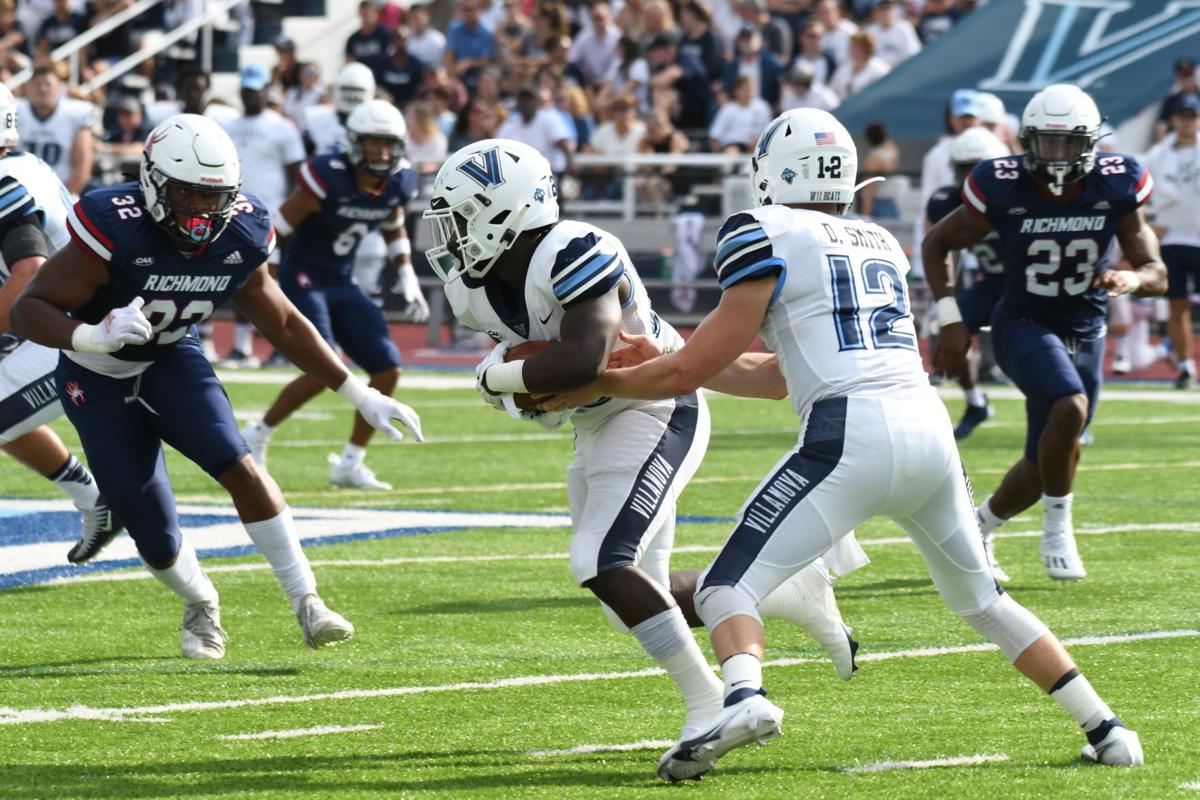 In Saturday’s clash between 21st-ranked Richmond and 12th-ranked Villanova at Villanova Stadium, the momentum swings were more like wrecking balls. Wildcats coach Mark Ferrante likened the back-and-forth nature of Saturday’s game to the drastic fluctuations more often seen in basketball.

The Wildcats dominated in the first half to take a 13-point first-half advantage. Then the Spiders took control with a 24-point third-quarter swing.

In the end, it was Villanova that got the last laugh. Ferrante’s team finished with what was a decisive 21-point fourth-quarter run to win 34-27 in both teams’ Colonial Athletic Association opener.

For the Wildcats, it was a euphoric finish in front of a sellout crowd of 12,001 during Villanova’s Family Weekend. For UR, it was a disappointment — a game seemingly in hand that slipped from its grasp in a relative instant.

“They outplayed us for three quarters, and we should’ve won the football game,” UR coach Russ Huesman said. “Bottom line.”

UR, after its big third quarter, was outgained 194 to 81 in the fourth quarter. The Spiders (2-1, 0-1 CAA) went three-and-ut back to back on late drives that were opportunities to put the game away. Villanova (3-0, 1-0) was efficient and effective late — its three touchdowns in the 21-point fourth-quarter swing came in 4:23 of game time.

UR faced a 13-0 deficit out of halftime, but Aaron Dykes changed the game with one play, a 98-yard return for a touchdown on the opening kickoff in the third quarter.

The Spiders from there looked like a different team. They had been outgained 201 yards to 67 in the first half.

“We knew we were in the game and had a chance,” Huesman said.

After Villanova got the ball following the Dykes score, Dez Boykin fumbled on a hit by UR’s Aaron Banks. It was recovered by Xavier Marshall at the Villanova 27.

The Spiders cashed in when Isaac Brown snagged a 28-yard pass from Joe Mancuso in the end zone for a touchdown. Just like that, UR led 14-13 at the 12:33 mark of the third quarter.

Later, Mancuso lobbed a pass to wide-open redshirt freshman tight end Connor Deveney down the right sideline for a 33-yard touchdown. And, after UR’s Aamir Hall snuffed out a Villanova drive with an interception in the end zone at the 4:12 mark, the Spiders cashed in for a 43-yard field goal by Jake Larson. They led 24-13 with 15 seconds to go in the third quarter.

Larson added a 23-yard, fourth-quarter field goal with 9:02 to play to make it 27-13. The field goal came with UR facing fourth-and-2 from the Villanova 6. Huesman considered going for it on fourth down instead of kicking the field goal, but a 14-point advantage was too tempting.

“Hindsight, I probably should’ve went for it,” Huesman said. “Make them drive 90 yards.”

Instead, after the kickoff, Villanova got the ball back at its 24. Quarterback Daniel Smith led the Wildcats on a march down the field that ended with his 2-yard touchdown run, diving onto the navy turf in the end zone to cut the Spiders’ lead to 27-20 with 5:01 to play.

UR’s consecutive three-and-outs came next. After the first one, the Spiders were called for an unsportsmanlike conduct penalty that put the ball on the Villanova 49. Smith went on to connect with Jaaron Hayek for a 44-yard touchdown to make it 27-all with 2:02 left.

After the second UR three-and-out, Smith, on third down, found Hayek for an 18-yard gain to the Spiders 47-yard line. Then he found Rayjoun Pringle, who hauled in the pass with a UR defender diving in front of him then hit the jets to score a 47-yard touchdown that gave Villanova the decisive 34-27 lead.

“The game should’ve been over,” Huesman said. “Because if we get a first down on offense when we’re out there the time before that, we win the game.”

Defensive tackle Kobie Turner said there’s much for UR to build off out of Saturday’s game.

But the Spiders were left to lament what would’ve been an valuable victory that evaporated before their eyes.

“When you have a good team like that you can’t take your foot off the gas,” Turner said. “And we did.”

CHARLOTTESVILLE – Brennan Armstrong is back to being a complete quarterback, and Virginia’s offense looks completely dominant.