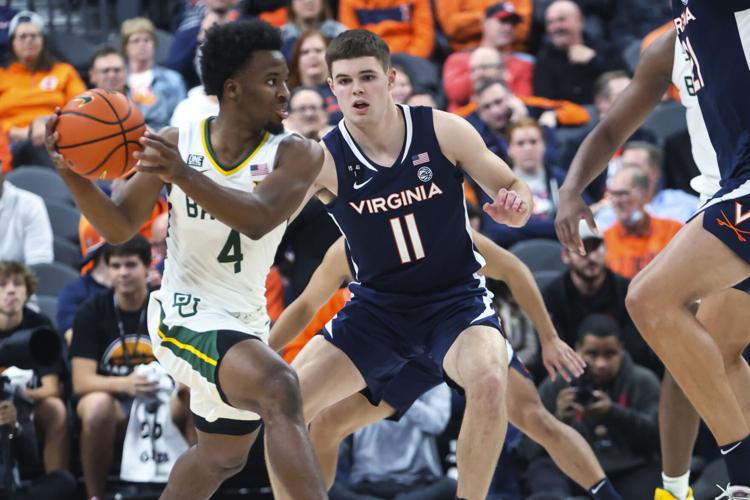 Virginia’s Isaac McKneely is becoming more confident looking for his shot at the midpoint of his freshman season. 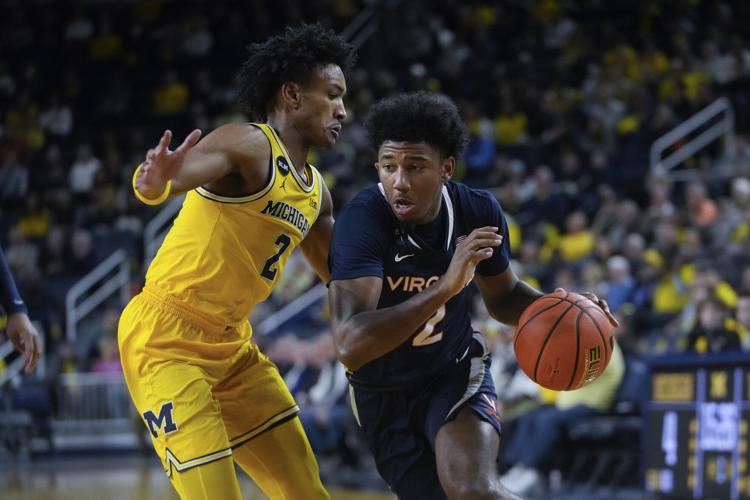 Virginia's Reece Beekman (right) appears to be regaining his health after being slowed recently by a strained hamstring.

“I told him, take the parking brake off,” said Bennett.

McKneely has taken 21 shots from beyond the 3-point arc the past four games, hitting 12 of them. He’s 7 for 11 on 3-pointers in his last two outings, scoring in double figures in both Saturday’s win over Syracuse and Tuesday’s victory against North Carolina.

Gone are the pauses that caused him to pass on open shots earlier in the season, the preference to swing the ball to a more experienced teammate. That’s not what Bennett wants from the 6-foot-4 West Virginia native.

That’s the mindset No. 13 UVa (12-3, 4-2 ACC) hopes McKneely brings into Saturday’s game at Florida State, the second meeting this season between the teams.

McKneely struggled from the floor in the first matchup, a 62-57 home win for the Cavaliers. He finished with 3 points on 1-for-5 shooting, including 1 for 4 from 3-point range.

Despite off nights, his teammates have echoed their coach’s sentiments.

“I just tell him to shoot the ball,” guard Armaan Franklin said. “He knows he can shoot the ball. We all know what he can do. It’s just a matter of him just stepping up and not passing up shots.”

In addition to a more confident and aggressive McKneely, Virginia anticipates having a healthier Reece Beekman on Saturday. The star guard injured his ankle in the Nov. 29 win over Michigan, then strained his hamstring a week later against James Madison.

He came back and labored through losses to Houston and Miami and sat out a Dec. 28 win over Albany in an attempt to more fully recover.

It appears to be working. Beekman has scored in double figures in each of his last three games, has more explosion when he drives to the basket, and is averaging 12.7 points, 5 assists, 3.3 rebounds, and 2.3 steals over those outings.

“For sure his health has improved and that’s helped a lot,” said Bennett.

Still, because hamstring injuries can linger, Beekman and the Virginia staff are remaining vigilant, and Beekman said he’s still not 100% healthy.

“I would say pretty close,” he said. “We’re still treating it day-by-day, a lot of time with [trainer Ethan Saliba], working to strengthen stuff. … It’s definitely getting better.”

Beekman had 7 points, five assists and four rebounds in the earlier win over the Seminoles (5-12, 3-3), the ACC opener for both clubs.

FSU fell to 1-9 after the Virginia loss. But since then, it’s been far more competitive, going 4-3 and winning a trio of ACC games, albeit against bottom-of-the-standings Louisville, Notre Dame and Georgia Tech.

“We’re a team that’s been kind of up and down,” FSU coach Leonard Hamilton said. “This is not who we normally have been. … We’re still a team that’s kind of learning and growing, in transition.”

In Wednesday night’s road loss at Wake Forest, the Seminoles finally got to play touted freshman Baba Miller, who the NCAA suspended for the first half of the season because he had accepted improper travel benefits.

“There’s no doubt he’s going to be an outstanding player for us,” Hamilton said. “You got to let him get his feet under him.”

Virginia’s Isaac McKneely is becoming more confident looking for his shot at the midpoint of his freshman season.

Virginia's Reece Beekman (right) appears to be regaining his health after being slowed recently by a strained hamstring.