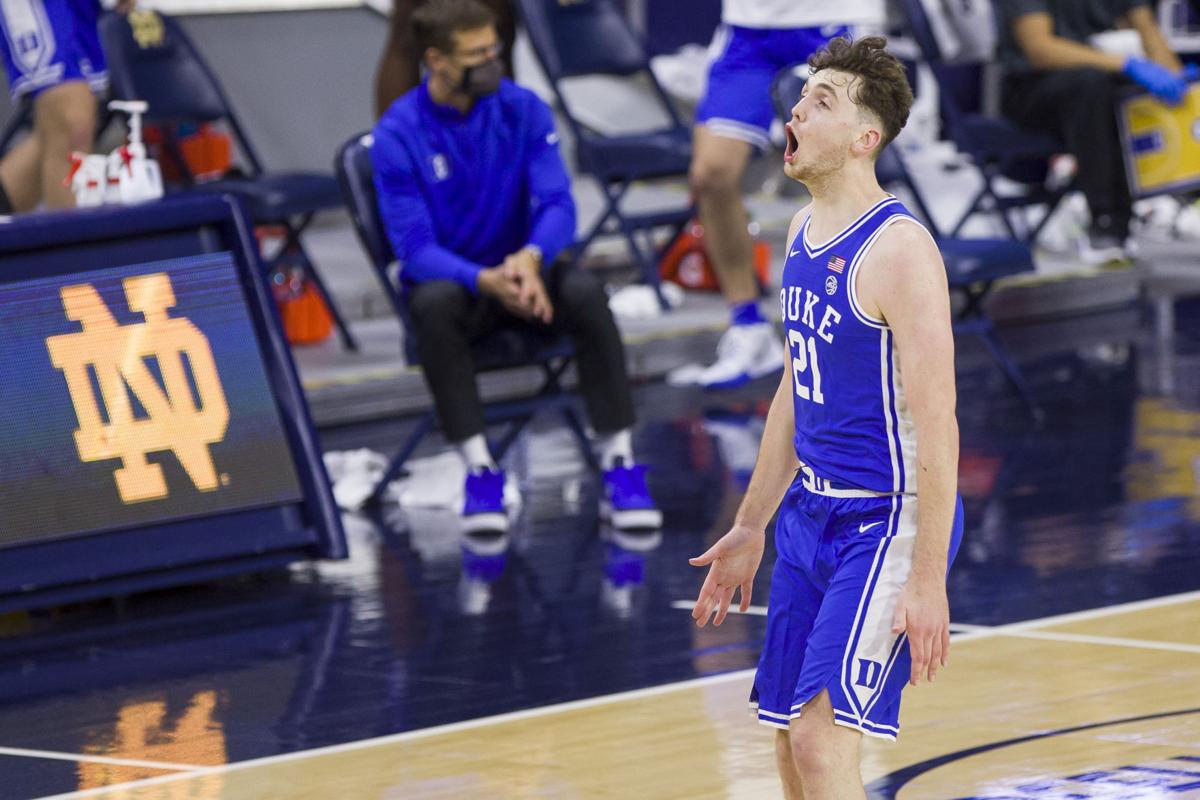 Duke’s Matthew Hurt (21) celebrates after a big play during the second half of an NCAA college basketball game against Notre Dame on Wednesday, Dec. 16, 2020, in South Bend, Ind. Duke won 75-65. 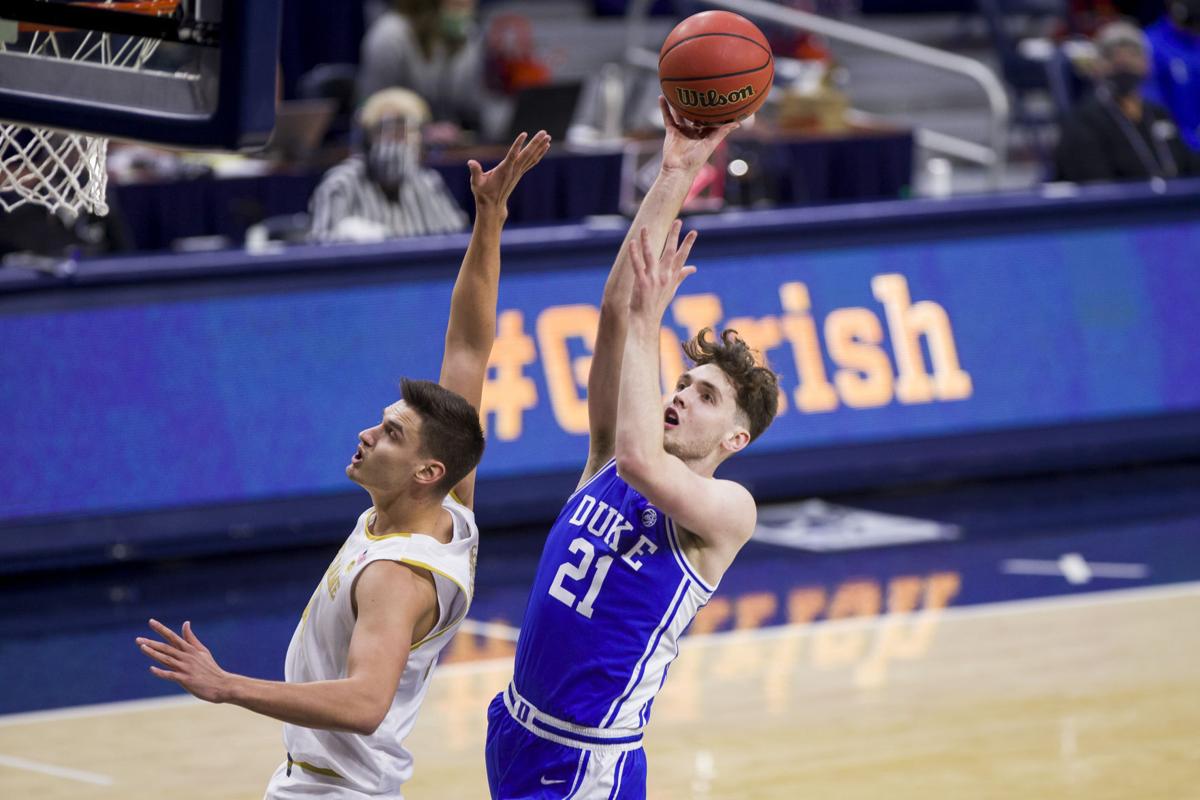 BLACKSBURG — Steve Forbes saw firsthand just how difficult a matchup Duke’s Matthew Hurt can be. Hurt, the ACC’s leading scorer, ripped Forbes’ Wake Forest team for 26 points, scoring inside, outside and all the spots in between.

“I think Hurt is just a really hard guy to guard because he can score at different levels,” said Forbes, whose Demon Deacons lost to Duke 79-68 on Saturday. “There’s very few guys I think can do that and he’s one of them.”

That’s the challenge facing No. 20 Virginia Tech as the Hokies host the 19th-ranked Blue Devils on Tuesday night at Cassell Coliseum. Mike Young’s team is coming off an impressive defensive outing in a win over Notre Dame on Sunday, a game in which the Hokies limited Notre Dame to just two field goals in the second half.

They held the Fighting Irish’s top three scorers below their season average.

“That was a really nice outing for our team defensively, and we needed it after two subpar performances on that end against Miami and again Wednesday evening against Louisville,” Young said. “So, step in the right direction.”

Hurt is averaging 19.6 points and 8.1 rebounds for the Blue Devils, who score 75.9 points per game, fourth most in the ACC. Last season, as a freshman, Hurt averaged 9.7 points and 3.8 rebounds while playing in all 31 Duke games and starting 22 times.

This year, the 6-foot-9, 235-pound Minnesota native has taken on the lead role.

Monday, he was named ACC player of the week after totaling 43 points and 17 rebounds in Duke’s two victories last week.

“He’s a lot bigger and stronger, and has just gone to another place,” Young said. “He’s a go-to guy now.”

Like Forbes, Young has been struck by Hurt’s ability to score all over the floor — on the low block, from 3-point range and with a tough-to-guard in-between game highlighted by a 10-foot, fadeaway jump shot.

“Just really a hard matchup,” Young said. “I’m still not certain how we’re going to go with it yet.”

Duke coach Mike Krzyzewksi said the Hokies — who allow just 64.9 points per game, the sixth lowest mark in the ACC — has a cohesive defense that makes it difficult to get open shots or get into the lane.

“They play as one. They cover up for one another. They really converge on the ball,” Krzyzewski said. “Mike’s teams play really good defense and this team has shown that they’ve followed his guidance. They can play.”

Krzyzewksi said his team works to get Hurt the ball in positions to attack the defense.

“We try to put him in more situations where he can show that improvement,” Krzyzewski said. “He’s kind of following the natural course of what an outstanding player has to do to become that outstanding player.”

Hurt will be even more important against Tech on Tuesday because Duke is thin in the frontcourt. Jalen Johnson (foot) will travel and dress for the game, but Krzyzewski said he isn’t sure the 6-9, 220-pound freshman will play.

The Blue Devils are still without 6-9 senior forward Patrick Tape (back).

In its win over Notre Dame on Sunday, Tech dominated the glass, outrebounding the Fighting Irish 41-24.

In two meetings last season, Duke outrebounded the Hokies by a combined 19 boards.

UVA women's basketball shuts down season due to COVID-19

With No. 12 Clemson back from its pause, defensive showdown looms for No. 18 UVA

“I would bet the under.”

BLACKSBURG — The process of unearthing ACC basketball’s premier team began in earnest Tuesday at Cassell Coliseum. The search will be lengthy …

Alabama wins college football title. Are you surprised? Get a recap

Top-ranked Alabama beat No. 3 Ohio State 52-24 to win its sixth national championship under coach Nick Saban. Here are the highlights in photos.

Midway through the second half of VCU’s game at George Washington Wednesday, the Rams’ Hason Ward denied a shot attempt by the Colonials’ Tyle…

Duke’s Matthew Hurt (21) celebrates after a big play during the second half of an NCAA college basketball game against Notre Dame on Wednesday, Dec. 16, 2020, in South Bend, Ind. Duke won 75-65. 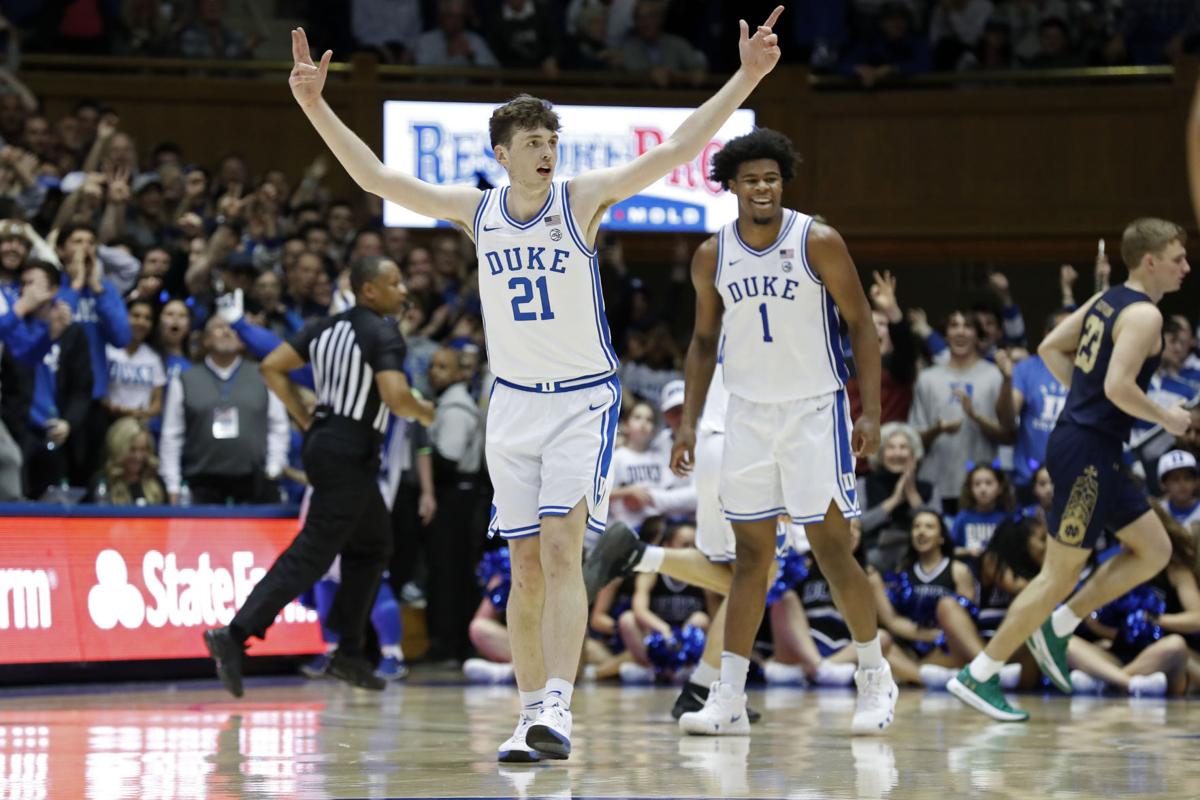