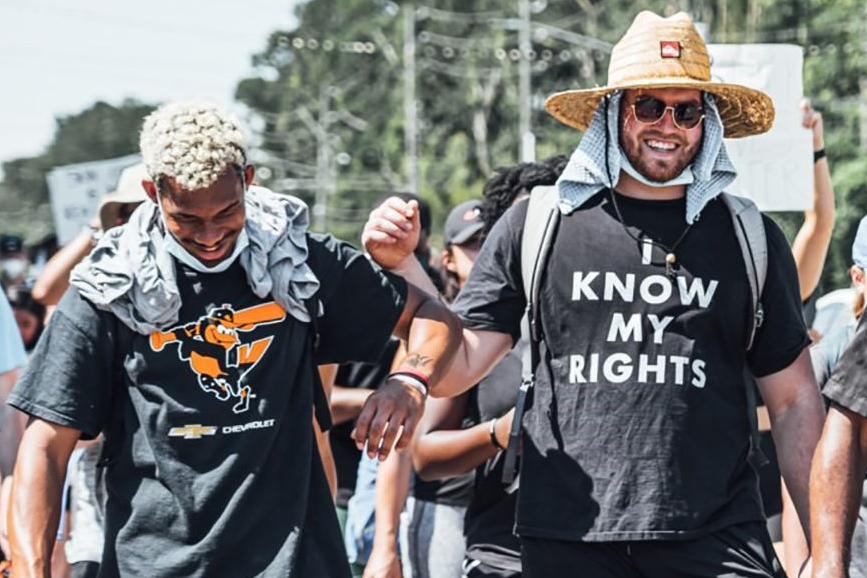 W&M’s Carl Fowler (with hat) walked alongside teammate Mike Jackson during their 20-mile march in North Carolina on June 7. 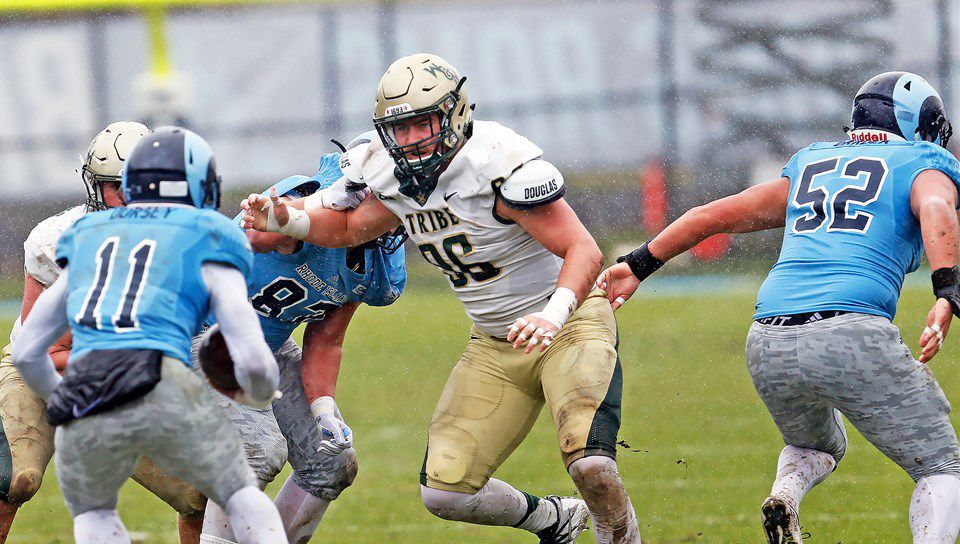 Carl Fowler, a team captain for William & Mary, has started 18 games on the Tribe’s defensive line.

Carl Fowler graduated in three years at William & Mary, earning a degree in public policy. This fall, he’ll start law school at W&M, with a primary interest in criminal defense for clients who may have been wrongly accused. Fowler, a redshirt junior defensive lineman and Tribe captain, transitioned from student to fundraising activist on the streets of North Carolina on Sunday, June 7.

Along with W&M teammate Mike Jackson, Fowler organized a 20-mile march that generated more than $20,000 for the Equal Justice Initiative, which works for criminal justice reform and the elimination of racial inequity.

Fowler, a white resident of Durham, N.C., and a Richmond native, viewed the death of George Floyd and the national response as triggers for personal action.

In Raleigh, N.C., as in other cities around the country, there were “peaceful protests gone wrong,” Fowler said. Vandalism. Tear gas. Fowler attended peaceful protests in Durham and wanted to put together something a bit more structured for the purpose of raising money.

“White people need to do their own stuff, not in terms of excluding black people in activism, but white people need to step up and lead things and not just join in solidarity,” Fowler said. “Because that sort of action is far more powerful and speaks a lot louder to other white people than just seeing people join in.

He decided if he walked from Durham to Raleigh — about 20 miles — that might draw interest and donations for a good cause related to the social inequality movement. He contacted Jackson, an African American from Annapolis, Md., looking for his reaction to the plan.

“The first thing that Mike says is, ‘Dude, shut up, I’ll do it with you,’” Fowler said.

They geared up for a two-man march on Sunday, June 7, starting at the Durham police headquarters and concluding at the Raleigh police headquarters. Fowler and Jackson, a defensive back, set the fundraising goal at $2,000 and their research led them to the Equal Justice Initiative as recipient of the funds.

“They’re in courts, fighting for defendants,” Fowler said of EJI, with which he was familiar through a class he took at W&M. “It’s hard to disagree with what they’re doing unless you are racist. … They’re fighting against racial injustice in the courts.”

“I was like, ‘Oh my goodness. There are going to be so many people. What are we going to do, Mike?’” Fowler said. “I had never done anything like this — Mike hadn’t either — in terms organizing. Things really just fell into place. I don’t know how else to say it.”

“We started on that Tuesday night with two people thinking maybe we could raise $2,000, and Sunday morning we show up to the Durham police department and there are 120 people there,” Fowler said. “At that time, we were approaching $19,000 [in donations], and we’ve since surpassed $20,000.”

According to Fowler, there were approximately 300 individual donors. The march lasted approximately seven hours, and included several current and former W&M football players. About 70 people went the distance, with others joining and leaving along the way. Marchers presented the Durham and Raleigh police with a list of suggested reforms related to police training and other law enforcement practices.

“This is absolutely not a weeklong, or a monthlong, commitment. These are lifelong things that we need to be doing because the injustices that we’re fighting are centuries old and ingrained into the systems that we operate in. There’s a lot of work to be done.”

Fowler was born in Richmond while his father, Don Fowler, worked at VCU as an assistant athletic director for development (1996-99). The family relocated to Durham when Don Fowler shifted to Duke University, in the development department.

Carl Fowler was 5 months old at the time of the move, and attended Northern Durham High.

W&M’s Carl Fowler (with hat) walked alongside teammate Mike Jackson during their 20-mile march in North Carolina on June 7.

Carl Fowler, a team captain for William & Mary, has started 18 games on the Tribe’s defensive line. 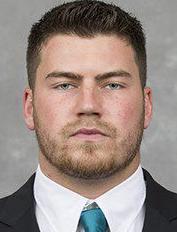 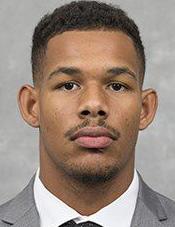