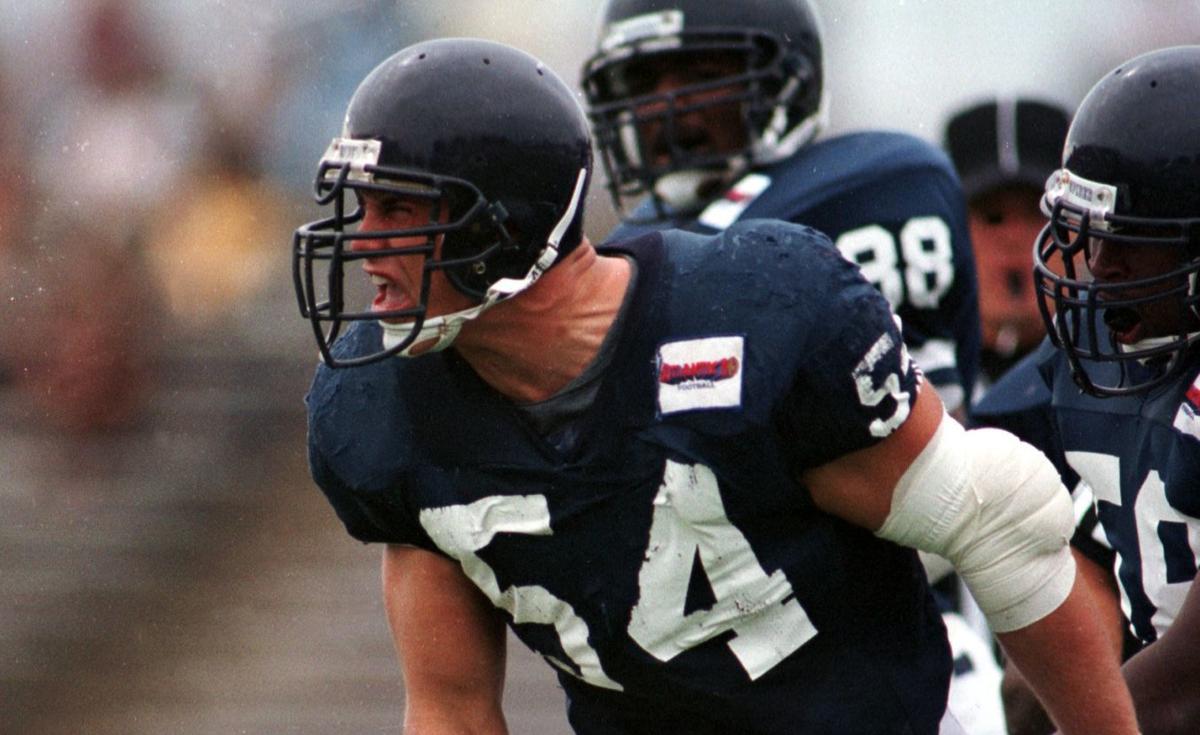 Marc Megna was an All-American defensive lineman at the University of Richmond in 1998. 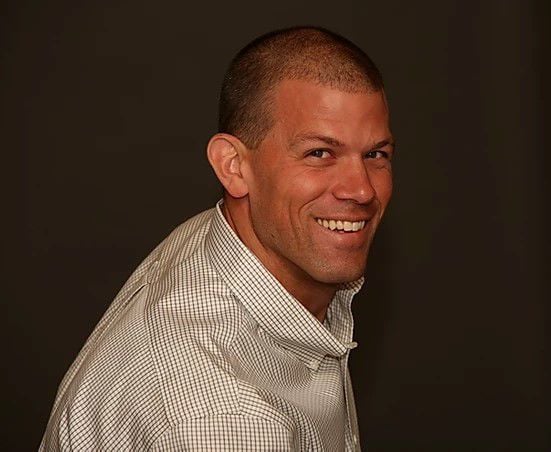 Randy West produced his documentary “Just a Kid from Fall River” as a “one-man team” traveling up and down the country.

Near the end of the documentary “Just a Kid from Fall River,” former University of Richmond football coach Jim Reid says, “This should be seen in every high school, more than just once.”

The motivational story of former Spiders great Marc Megna, told in the 1:50 film directed by Richmond resident Randy West, also a former Spiders football player, appeals to viewers of all ages. But Reid got it right.

Megna’s tale of triumph — a chubby kid from a one-parent household in hardscrabble Fall River, Mass., finds himself by outworking the competition on the way to the NFL and business success — shows what can happen when a teenager sets priorities and reaches goals that initially appear unachievable.

That’s what West, a 1998 graduate of Meadowbrook High and a former teacher there, wanted to convey with his first full-length documentary, released through West’s Monarch Productions.

“It’s hard for people to really understand this, but the greatest reward is putting something out there that is positive and family friendly, and will hopefully improve somebody’s life, or inspire somebody to change their life for the better,” said West, 39.

West and Megna shared the documentary financing, about $70,000, according to West. He traveled by car from Canada to Florida, and many other places, to do his 50 on-camera interviews.

“I was a one-man team, basically,” he said. It took four-and-a-half years to complete the project. The documentary is available on Amazon, iTunes, Vimeo and Google Play.

“It’s not like I’m trying to get rich off of it, but if I can at least make my money back or get close to breaking even, I’d be extremely satisfied,” West said.

West, a 2003 UR grad and former Spiders’ offensive lineman, and Megna met after Megna was done as a UR player. He joined Reid’s staff as a graduate assistant in 2001.

“I had always heard stories about him,” said West, who taught at Meadowbrook 2004-15, and also was an assistant football coach at the school.

West left teaching to concentrate on creating high-quality video content, his primary professional goal. West was drawn by Megna’s story because of its inspiration rooted in Megna’s drive, which is “completely genuine,” West said. “He has developed … a quality to want to be the hardest worker in the room no matter if there’s anybody else in the room watching.”

West said he encountered many students at Meadowbrook who had talents, but failed to use them in productive ways because they believed their life circumstances were holding them back.

“I thought if people saw (the documentary) they might think, ‘Oh, well this guy did it. It’s not going to be easy, but maybe I can achieve my dreams and my goals,’” West said.

Megna, a 6-foot-1, 255-pound defensive lineman at UR 1995-98, was named an FCS All-American, and won the Dudley Award, which annually goes to Virginia’s finest Division I player. Reid grew so tired of seeing Megna held by blockers that the coach once shouted to officials, “Would it help if we put handles on No. 54 (Megna) to make things a little easier for them?”

Megna was drafted in 1999 by the New York Jets (sixth round), and went on to play linebacker for the New England Patriots, Cincinnati Bengals, and for Toronto in the Canadian Football League. He became a personal trainer, appeared on covers of fitness magazines, and founded Anatomy, which offers a holistic approach to health and fitness at two Florida locations.

“Randy West did an incredible job gathering content and committed the last five years of his life to make (the documentary),” said Megna, who wrote a book, “Dream Big, Never Quit,” which tells his story. “I’m blown away by his ability to inspire people to become the best versions of themselves by sharing my story.

“We believe it can add value to anyone working toward their dreams.”

Among those interviewed by West were several former UR players and coaches. “A snowball.” That was Megna’s shape as a boy, according to one of the interview subjects in Fall River. Megna was bullied. And then he decided that would stop.

Megna, speaking of his teenage years, told the Times-Dispatch during his UR career: “When other guys were partying, I’d lift. When they went to the beach, I ran.”

Reid, a Massachusetts native who coached at UMass before coming to Richmond, learned from contacts that Megna should be evaluated as a Spiders’ prospect. Northeastern at that time was the only school recruiting Megna. He was strongly considering a career as a U.S. Marine. Reid watched game film of Megna.

But Megna’s high-school coach and others convinced Reid to offer a scholarship. Megna’s motor and continued commitment to strength and conditioning helped him develop into a star under Spiders’ defensive line coach Joe Cullen, who may deserve his own documentary, based on the amusing stories about him in West’s work.

While Megna rose on the field, his grades were a mess. “I was certainly in over my head. I felt completely lost. It was so bad, I didn’t see any light at the end of the tunnel,” he said. Megna contacted his mother and told her he didn’t believe he was going to make it through UR. She convinced him he could. Reid became a father figure to Megna, and provided academic guidance.

Above all, West said he was committed to 100% authenticity in his project, because some documentaries promoted as truth may not be entirely so.

“I didn’t want any doubts from anybody when they finished viewing the film, like ‘I wonder if this was exaggerated or if this was actually true?’” West said. “It’s told from 50 different people with the exact same story.

“This is who Marc Megna was. This is what he did.”

Marc Megna was an All-American defensive lineman at the University of Richmond in 1998.

Randy West produced his documentary “Just a Kid from Fall River” as a “one-man team” traveling up and down the country. 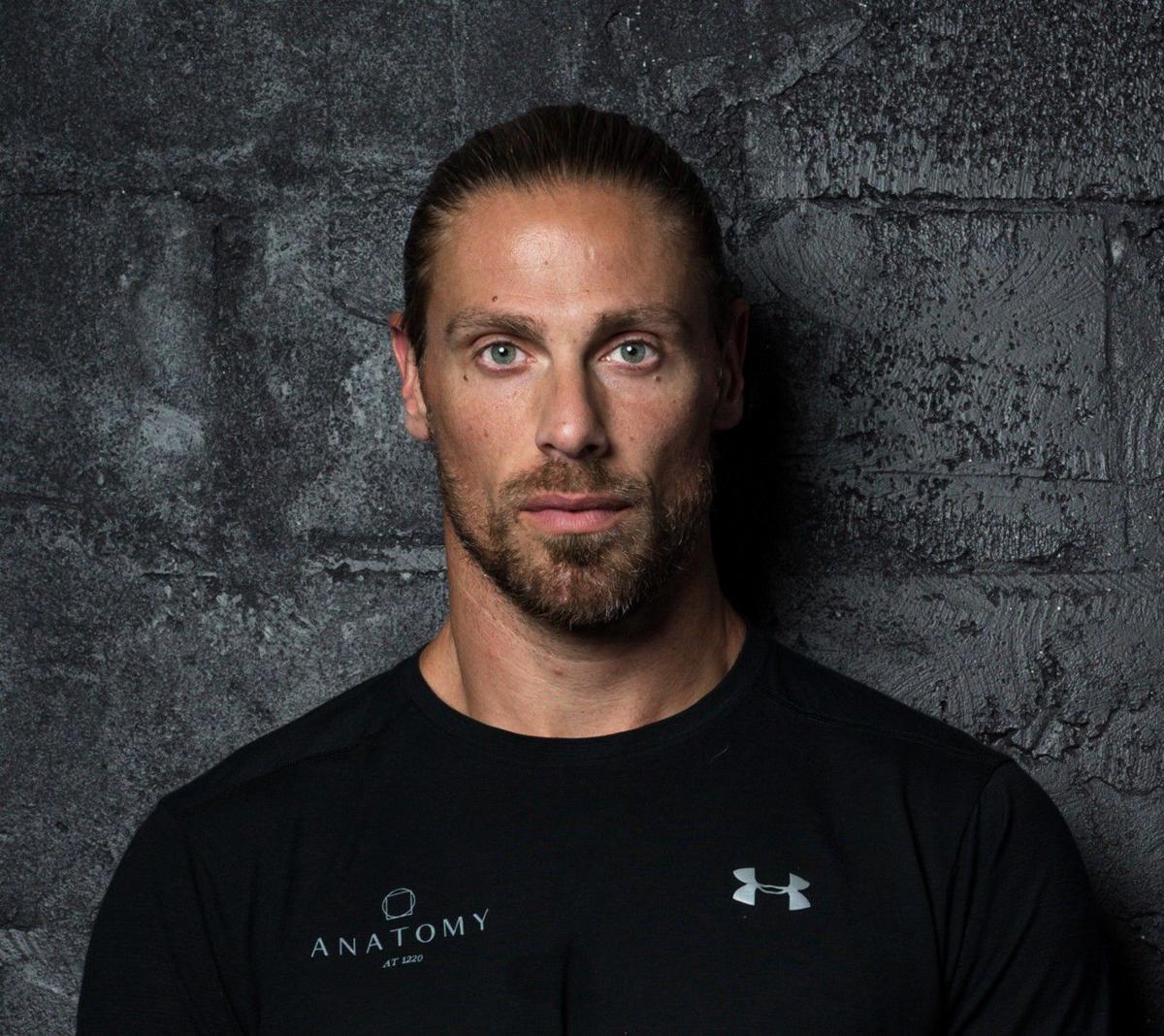