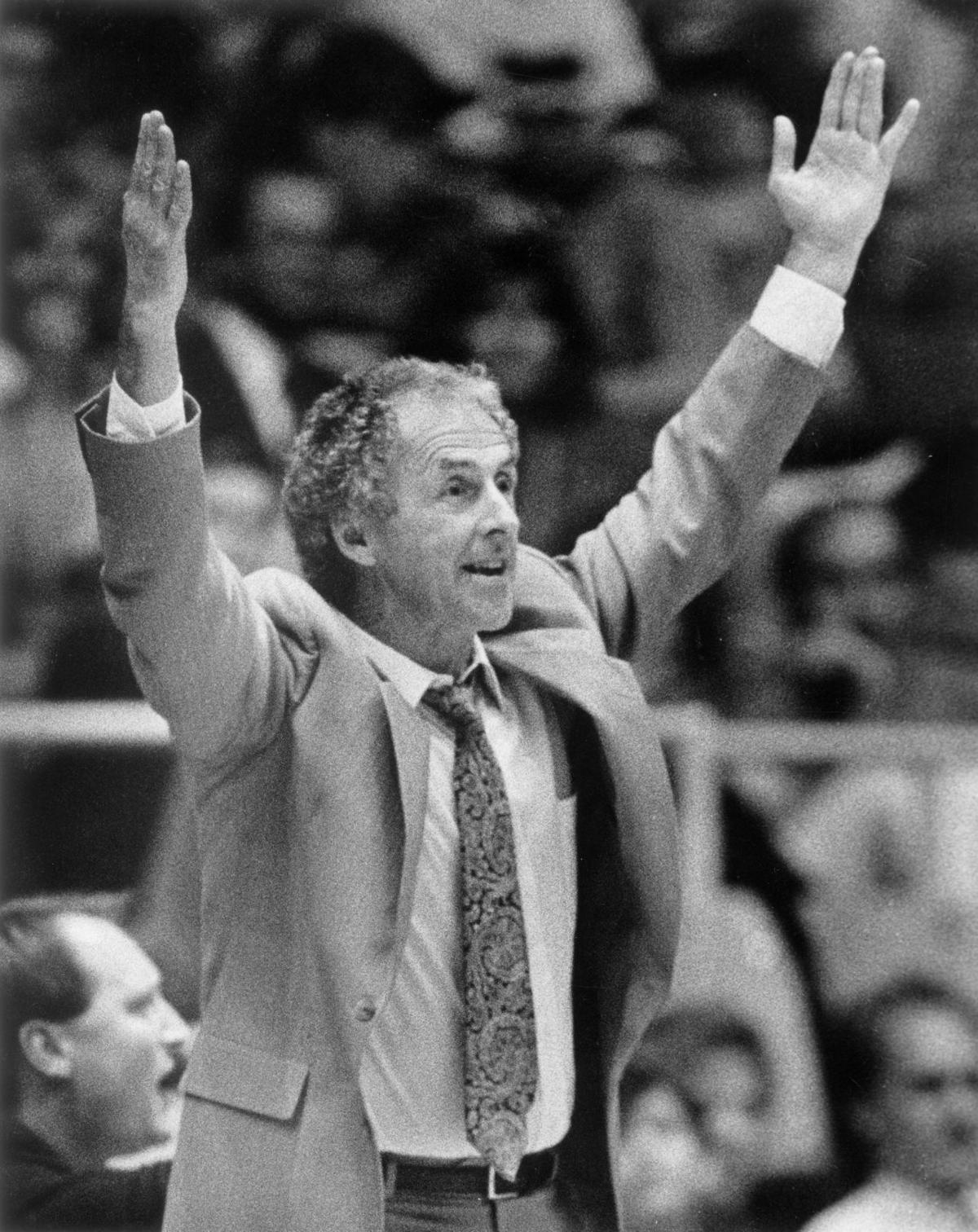 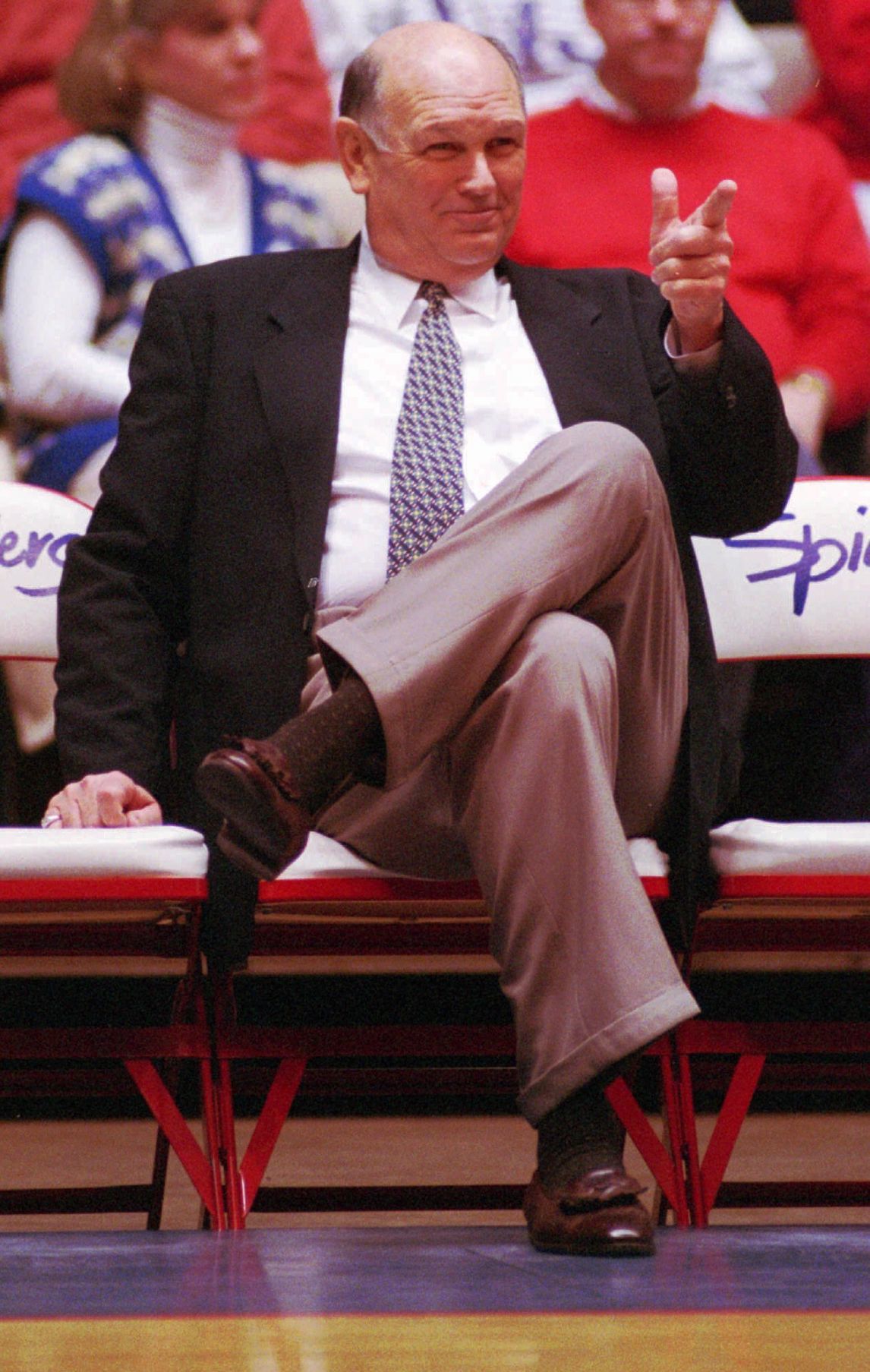 Lefty Driesell, who entered the Naismith Memorial Basketball Hall of Fame in 2018, was head coach at James Madison from 1988-1996. 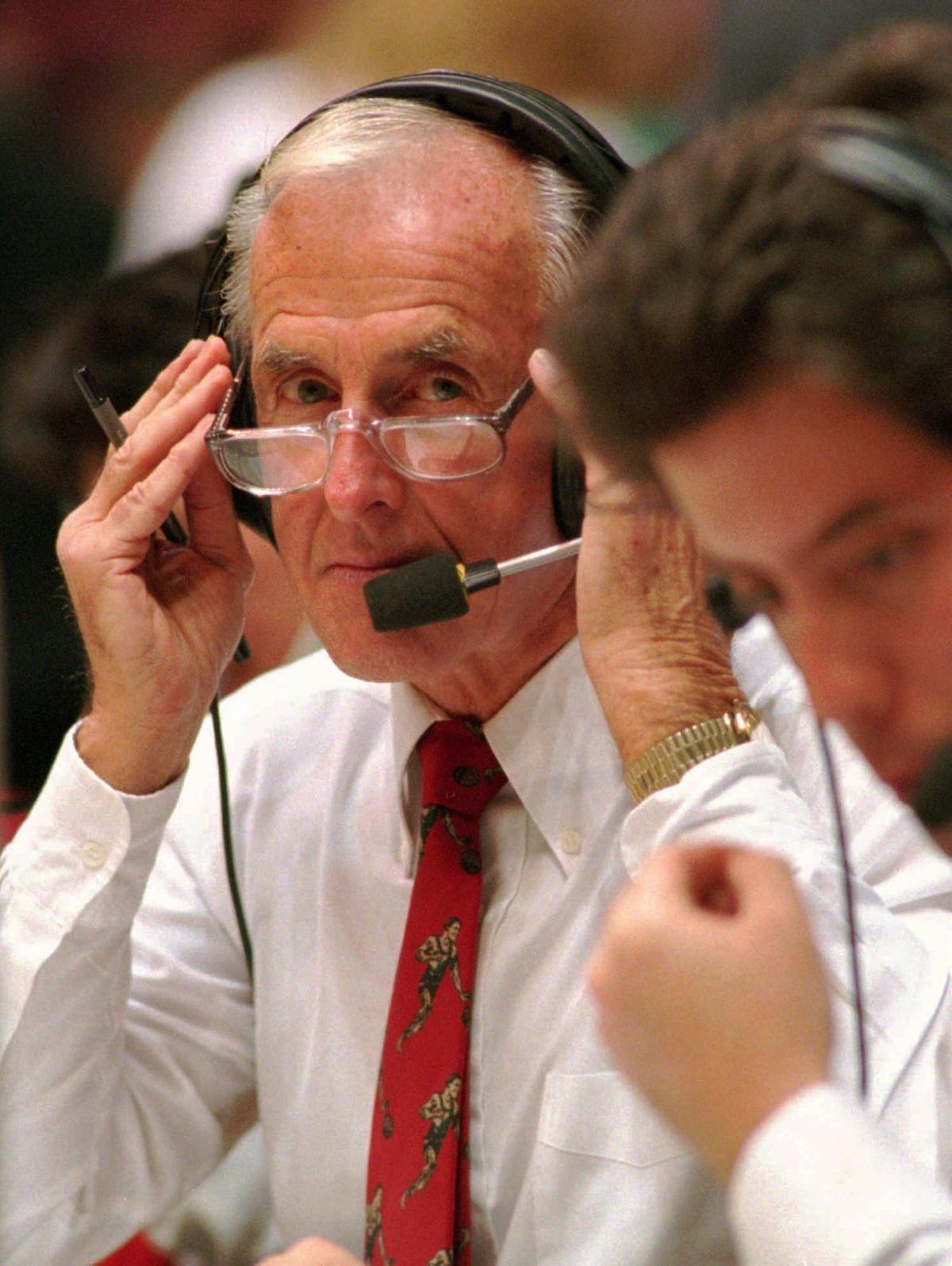 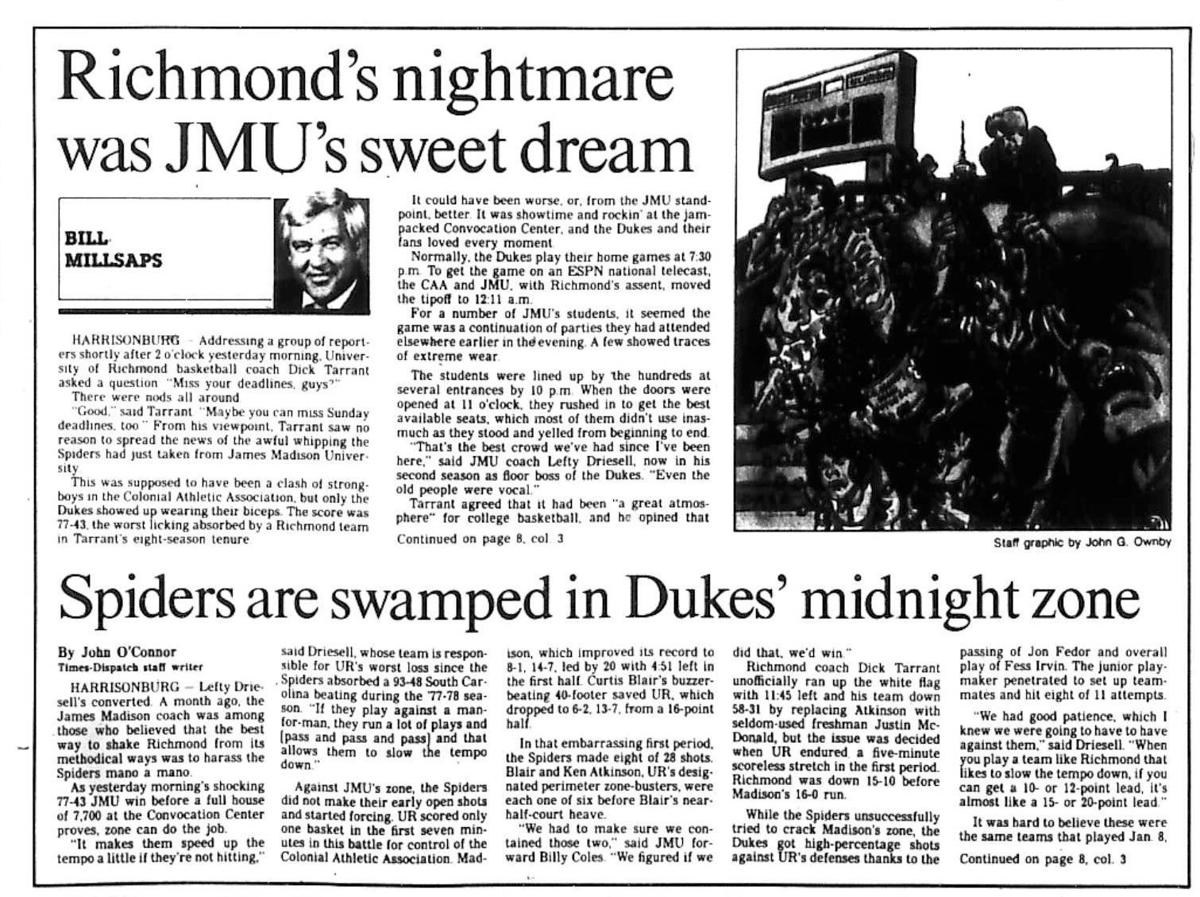 For the next few weeks, we’ll run stories from The Times-Dispatch sports archives, paired with memories of those events from our readers. Send your memories, no more than 200 words, to sports editor Michael Phillips at mphillips@timesdispatch.com.

Memories from an RTD reader

The feeling around campus seemed to be that the ESPN “Midnight Madness” game was THE can’t-miss event. The allocated student tickets went very fast and there was quite a bit of scrambling for students without tickets to try and find a way inside one way or another.

I remember long lines outside the Convo to get in well before midnight and students packing the bleacher section to the point where it was practically standing room only. Mostly, though, I remember the noise. It was very, very loud, especially in the first half before the game got out of hand. The JMU players were feeding off the atmosphere in a big way. I tip my hat to Coach Tarrant for making that game possible. He could have said no thank you.

From the RTD archives

For James Madison University, it was a primetime performance after midnight. For the University of Richmond ... well, maybe most of the nation went to bed and didn’t watch.

The Colonial Athletic Association got a regular-season basketball game on national television for the first time this morning (yes, this morning).

The matchup, UR versus JMU at JMU’s sold-out Convocation Center, had the makings for plenty of drama.

Madison and Richmond were tied for first place in the loss column in league play. In recent seasons, the two teams had played numerous close games. Not this time. The game started at 12:14 a.m. By the second commercial break, the game, for all intents and purposes, was over.

JMU won 77-43, and an argument can be made that it wasn’t even that close.

The loss was the worst in UR coach Dick Tarrant’s nine-season career, and the margin of defeat was the Spiders’ biggest since they lost by 45 to South Carolina to close the 1977-78 season.

“I know Coach Tarrant has got to be thinking, ‘Maybe I should have stayed in bed tonight,’ ” JMU Coach Lefty Driesell said. “It was just one of those nights.

Driesell’s words were little consolation to Tarrant, who sounded awfully similar to the way Driesell sounded after UR beat JMU by 11 last month.

“I am a very humble man tonight,” Tarrant said. “I have a damaged team right now. I’m going to try to get them together.

“We blew a game (Monday) that we should have won against Old Dominion, so I had damaged kids coming in. We have to shore up.”

Richmond has until Wednesday, when it travels to American University. JMU can savor its victory for a week. It doesn’t play again until next Saturday.

“We caught them last time coming off a couple of losses,” Tarrant said. “You win a few in a row, it does wonders for your confidence. They were marvelous tonight.”

Two of the points came when JMU was assessed a technical foul. Despite repeated warnings, fans threw toilet paper on the floor after the Dukes’ first basket.

Three of the points came when Curtis Blair hit a prayer-shot from midcourt at the halftime buzzer.

The only thing encouraging about the first half for Richmond was that it did eventually end and that freshman Kenny Wood came off the bench and got five rebounds. Wood started the second half.

A look at the guards’ statistics shows the difference.

JMU’s Fess Irvin and Steve Hood were 9 of 14 from the floor and combined for 26 first-half points. UR’s Ken Atkinson and Blair were 3 of 13 and had nine points. Both picked up three personal fouls.

“The more we missed, the more inept we became. I don’t want to discredit Madison’s defense. It was a zone that gave us shots. We’ve had an awful time putting it in against zones.”

Richmond never threatened a battle in the second half. JMU could have made the margin worse had it taken full advantage of several UR dry spells.

Tarrant went to his bench early. He had all his starters out (they returned briefly later) with more than 10 minutes to play.

“The time (of the start) was absolutely inconsequential,” Tarrant said. “That would be a weak cop-out on my part if I was to say the time of the game had any bearing on our inept showing.

“Let’s be positive. Let’s not bash our guys and say we were horrible. Let’s say Madison was very good.”

Driesell was as upbeat as Tarrant was down. It is hard to believe that just four weeks ago he was wondering what he’d do with his team.

“That’s why I’ve been coaching 30 years,” he said. “You’ve got to look, pry, try different things. That’s what makes it interesting.

“I was taking films of warmups, seeing if we were warming up right. When you’re losing, you try everything.”

Blair, with 15 points, was UR’s only double-figures scorer. Wood finished with eight rebounds.

This was JMU’s first victory over UR under Driesell, after four losses. “You feel like you owe ‘em one; that’s the way we felt tonight,” Hood said.

Said Irvin, “This is a good win for us, it shows we’re getting organized. It really ought to motivate us to know we can play a game like this against a team like Richmond.”

There were nods all around.

“Good,” said Tarrant. “Maybe you can miss Sunday deadlines, too.” From his viewpoint, Tarrant saw no reason to spread the news of the awful whipping the Spiders had just taken from James Madison University.

This was supposed to have been a clash of strongboys in the Colonial Athletic Association, but only the Dukes showed up wearing their biceps. The score was 77-43, the worst licking absorbed by a Richmond team in Tarrant’s eight-season tenure.

It could have been worse, or, from the JMU standpoint, better. It was showtime and rockin’ at the jam-packed Convocation Center, and the Dukes and their fans loved every moment.

Normally, the Dukes play their home games at 7:30 p.m. To get the game on an ESPN national telecast, the CAA and JMU, with Richmond’s assent, moved the tipoff to 12:11 a.m.

For a number of JMU’s students, it seemed the game was a continuation of parties they had attended elsewhere earlier in the evening. A few showed traces of extreme wear.

The students were lined up by the hundreds at several entrances by 10 p.m. When the doors were opened at 11 o’clock, they rushed in to get the best available seats, which most of them didn’t use inasmuch as they stood and yelled from beginning to end.

“That’s the best crowd we’ve had since I’ve been here,” said JMU coach Lefty Driesell, now in his second season as floor boss of the Dukes. “Even the old people were vocal.”

Tarrant agreed that it had been “a great atmosphere” for college basketball, and he opined that JMU’s band was “ . . . marvelous. I told Lefty I’d trade any five of my guys, 1 through 12, for that band. He said, ‘Ah’ll keep mah band.”’

Extremely conscious of crowd behavior, JMU officials had the public address announcer repeatedly tell the capacity throng that any objects thrown on the floor during the game could result in a technical foul against the home team. Sure enough, after JMU’s first field goal, rolls of toilet paper came sailing out of the student sections onto the floor, and referee Larry Rose whistled a technical foul.

The recent history of the JMU-UR series indicates that gift points, no matter when they were scored, had the potential to be decisive. This time, Ken Atkinson’s two free throws off the technical were only the difference between losing by 34 and losing by 36.

There was one more toilet-paper-throwing incident, but it was only one roll, and it hit the floor after JMU scored its first basket of the second half. Driesell was apoplectic. He looked ready to climb in the stands and find and eject the miscreant. This time, Rose blew the whistle only to stop play. He took the paper off the floor and let the game continue without another technical.

Who knows? Another 20 technicals against JMU and this one might have been close.

Though the players are the same, this was hardly the same James Madison team that lost by 11 points less than a month ago at UR. That was the Dukes’ fifth loss in a stretch of six games. At the time, Driesell was making use of 11 players, and consequently the Dukes had little on-court chemistry.

“We played 11 of our first 14 away from home,” said Driesell. “We were worn out. We had lost five or six in a row. You lose confidence.

“I was taking films of warmups to see if we were warming up right. In that situation, you do everything to find out what’s the matter.”

Since then, Driesell has reduced his rotation to eight players. He’s moved Barry Brown and Jon Fedor into the starting lineup at center and forward, respectively, and the Dukes have won eight in a row to take command of the CAA regular-season race.

Fedor, in particular, seems to have made a real difference. Knowing the Dukes don’t need him for points, Fedor gives his club a very solid rebounder, passer, screener and defender.

Additionally, Driesell said he thought he was too tough on his players earlier in the season. “I was expecting too much,” he said, “so I eased up on them some.

“I know we’ve got it rolling now, but the secret is to keep it rolling.”

Today, Richmond is in pretty much the same shape JMU was in after the teams’ first meeting this season. After blowing a six-point lead with 18 seconds left, and losing in overtime to Old Dominion Monday night, and after getting drilled by JMU, Tarrant described his team as damaged and himself as humbled. His postgame speech to the Spiders consisted of 30 seconds of silence and three words: “Off day today.”

Tarrant refused to accept the odd starting time as a possible excuse for the Spiders’ performance, which he termed dismal and inept. Blaming the late hour for such a blistering, said Tarrant, would constitute “a weak cop-out.”

Even so, CAA Commissioner Tom Yeager said, “I don’t think I’ll be asking Dick to play any more midnight games.”

If Tarrant doesn’t appreciate that, us Deadline Dopes will.

Lefty Driesell, who entered the Naismith Memorial Basketball Hall of Fame in 2018, was head coach at James Madison from 1988-1996.