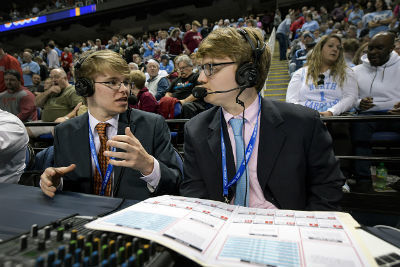 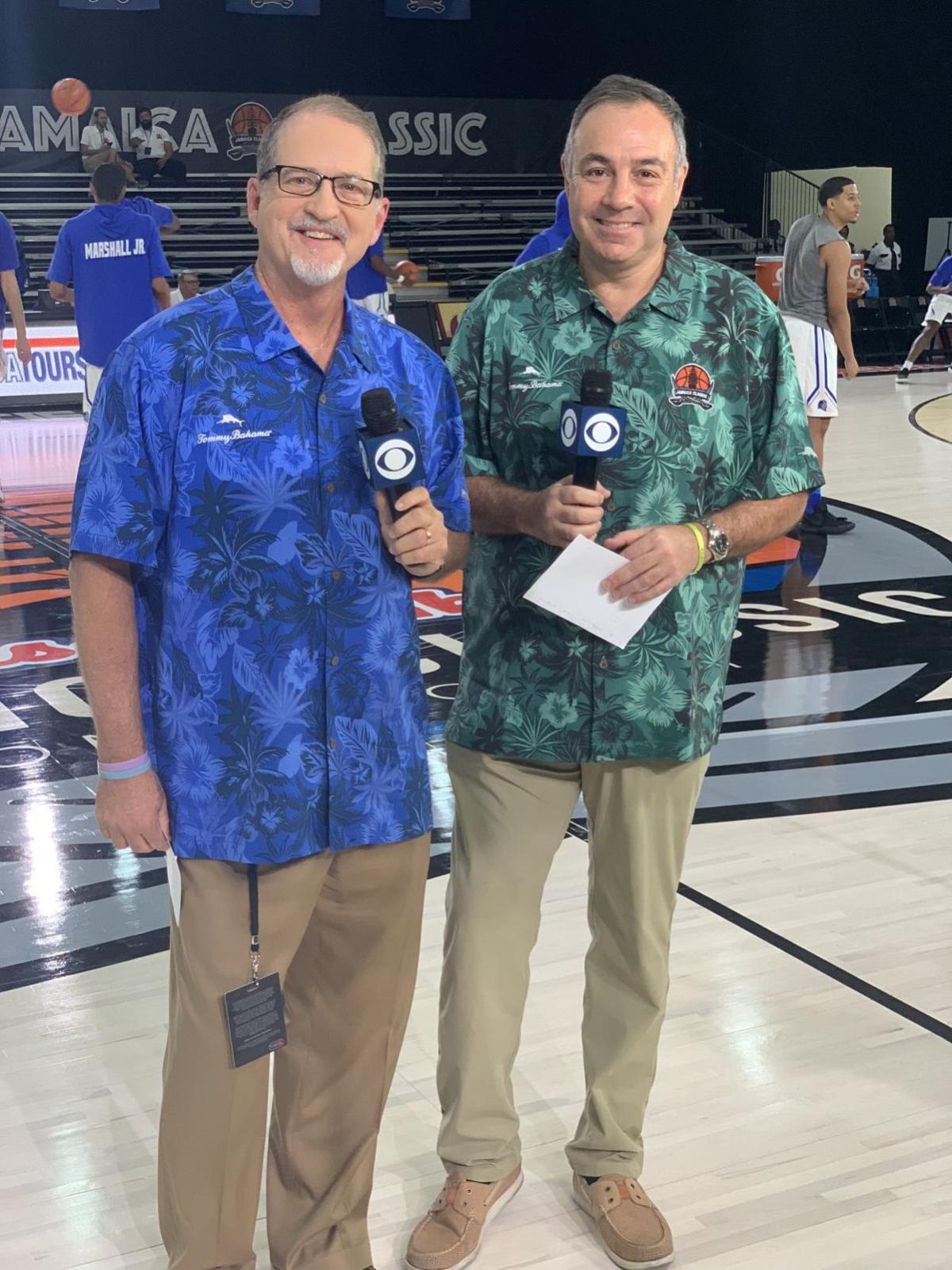 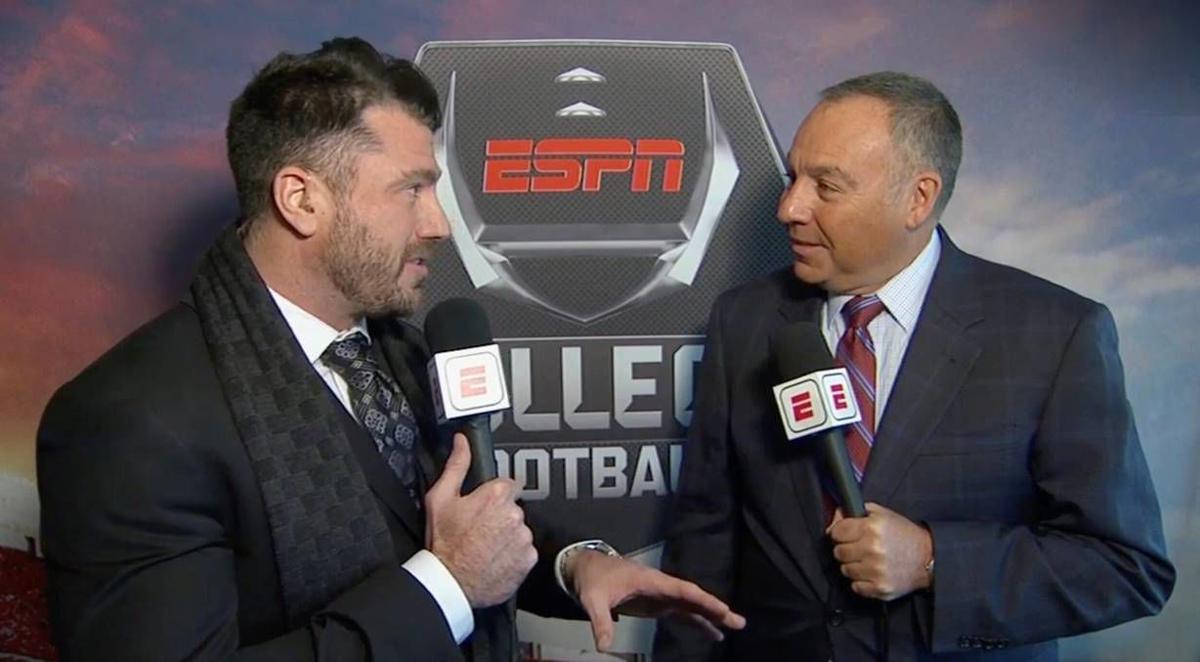 Bill Roth (right), the radio voice for Virginia Tech football and basketball from 1988 to 2015, is a member of the Virginia Sports Hall of Fame. 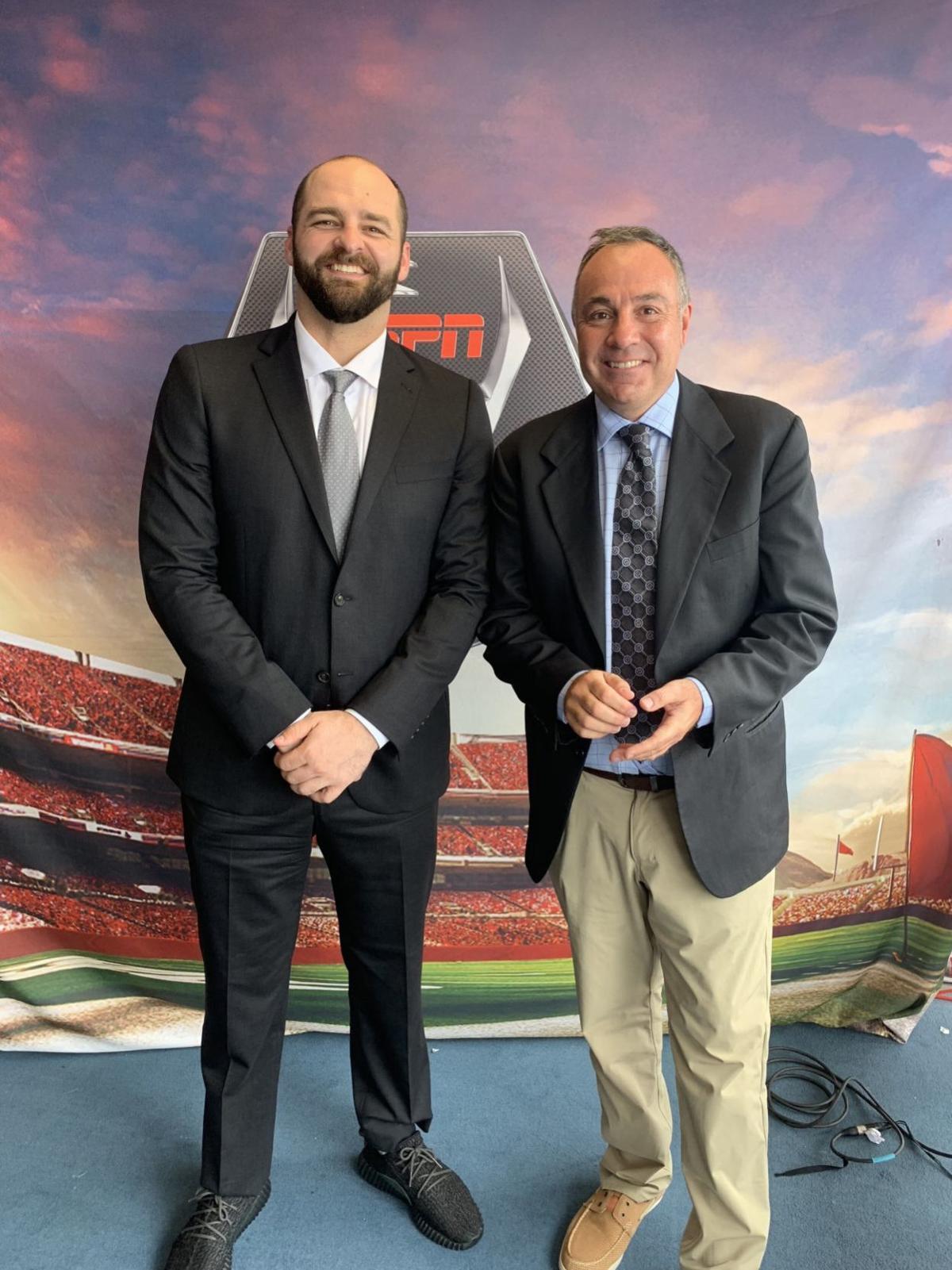 Bill Roth (right), the radio voice for Virginia Tech football and basketball from 1988 to 2015, is a member of the Virginia Sports Hall of Fame.

Tech’s sports media and analytics curriculum has introduced Cunningham and scores of others to those avenues, and more, with remarkable in-the-field experiences.

“The high school me … never would have envisioned it,” Cunningham said from his family’s Yorktown home.

Bill Roth had similar opportunities as an undergraduate at Syracuse’s renowned Newhouse School of Public Communications. He brought that approach to Virginia Tech, where in 2016 he became a professor of practice and helped create the Department of Communication’s sports media and analytics concentration as part of the multimedia journalism major.

Roth didn’t need a GPS to find Lane Stadium, Cassell Coliseum or the Moss Arts Center, the headquarters for his classes. He was the radio voice of Hokies football and basketball from 1988 to 2015, earning 11 Virginia sportscaster of the year awards from the National Sports Media Association and 2013 induction into the Virginia Sports Hall of Fame.

“When Bill said he was coming back to teach in our communications program to create this thing, I knew it was the place for me,” Cunningham said. “I was sold on going to Tech anyway, and then Bill just kind of sealed the deal.”

Roth brought gravitas and vision to the SMA program, which then added broadcasters Andrew Allegretta and Robin Reed to the faculty. The 2018 Virginia sportscaster of the year, Allegretta was Tech’s director of broadcasting and digital media for Olympic sports before departing last year to become Tulane’s radio voice; Reed is a Roanoke television news staple.

Learning from such pros is invaluable, and Roth brings other top-shelf journalists into his classes, ESPN’s Rece Davis, the ACC Network’s Wes Durham and The Athletic’s Andy Bitter among them.

Last fall, SMA became a major at Tech, with seven dedicated courses, and this week the Tech Board of Visitors approved the formation of a School of Communications and Digital Media. Pending ratification from the State Council of Higher Education for Virginia, the school will open next fall.

“That’s a really big thing,” Roth said. “We’re the only school in the state with a stand-alone major in sports media. … The opportunities you can get on air, and mostly behind the camera, too, are just enormous at Virginia Tech right now.”

Roth, who works television and radio assignments for ESPN, CBS Sports Network and Westwood One, expects 156 SMA majors in 2020-21. He recruits against more established programs at Syracuse, Northwestern and Arizona State, selling prospective students and their parents on the practical experiences available at Tech.

Unlike Northwestern and Arizona State, Tech isn’t located in a professional sports market that offers partnerships with NFL and Major League Baseball. But the cooperation of the Hokies’ athletic department and the ACC, and the 2019 advent of the ACC Network have ignited Roth’s program.

SMA students write on tight deadline — some assignments must be submitted 30 minutes after a game ends — and broadcast live from myriad Tech sports, their work appearing on 3304 Sports, a multimedia online platform that carries the course number of Roth’s play-by-play class. They interview Hokies coaches, on-camera and in news conferences, after uplifting victories and gutting defeats.

They work on the air and behind the camera for ACC Network telecasts, learning ESPN’s language and standards. In March, Cunningham and several classmates chronicled the ACC men’s and women’s basketball tournaments as writers and broadcasters.

“We sometimes hear that the world is our classroom,” Cunningham said. “Bill’s helped us experience that. … He’s there to give us feedback. He’s there to guide us.”

In the classroom, SMA students explore the analytics behind the Nielsen ratings and how television networks schedule games. To learn interview techniques, they watch video of coaches such as Syracuse basketball’s Jim Boeheim and the San Antonio Spurs’ Gregg Popovich shredding reporters for ill-informed/phrased questions.

And during the remote learning of March and April, Roth had his play-by-play students call the action as they performed mundane household tasks.

Roth revels in the results: Evan Hughes serving as a men’s basketball sideline reporter for the ACC Network and hosting a podcast for TechSideline.com; Liam Sment asking North Carolina coach Roy Williams an astute question after Syracuse routed the Tar Heels in the ACC tournament; Cunningham working from a control room at Lane Stadium as a graphics operator for an ACC Network men’s soccer telecast.

“David can walk into an ESPN production truck where there’s a bank of 40 monitors, and he knows what each one is,” Roth said. “I don’t know what each monitor is.”

Seven SMA students submitted highlight reels for this year’s Jim Nantz Award, presented by the National Sports Media Association to the nation’s top collegiate sports broadcaster. Seven were scheduled to call play-by-play of minor league and summer league baseball around the country, those plans scrapped or delayed by the coronavirus pandemic.

Indeed, the vast majority of SMA students I’ve encountered are sharp, curious and ambitious. Hughes asked insightful questions during a TSL podcast we shared. Cunningham is an excellent Twitter follow, informative and timely.

“We started a career fair,” Roth said. “We have a bunch of kids who have gotten jobs, and at the end of the day, that’s the bottom line, right? … I’m really happy with where we’re heading with this.”