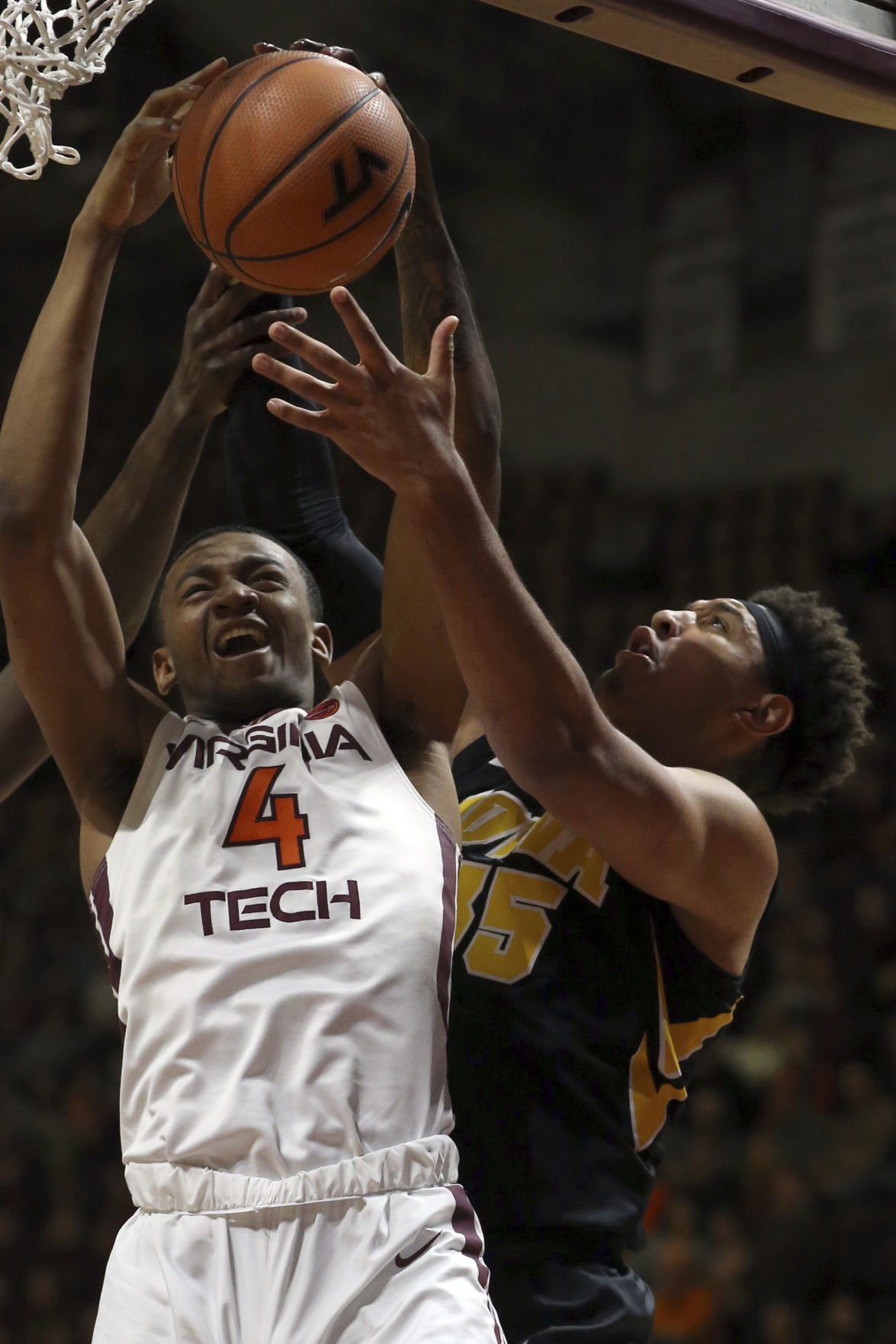 Former Iowa player Cordell Pemsl (right) should help the Hokies on the boards and in getting to the free throw line. 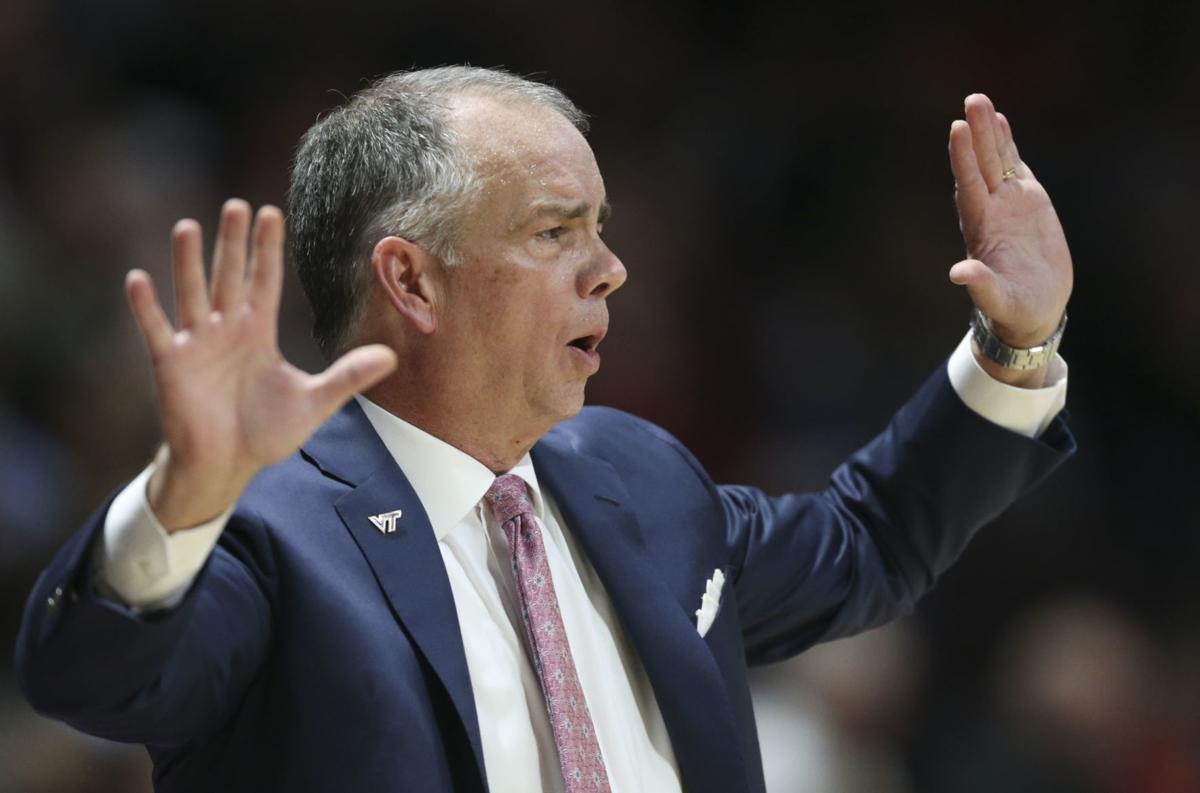 Virginia Tech head coach Mike Young in the first half of the Virginia Tech — University of North Carolina NCAA basketball game in Blacksburg on . Wednesday.

Next season, the Hokies will have five scholarship players 6-7 or taller, only one a rookie. Moreover, three are Division I transfers with intriguing stats from their previous stops.

Start with the Hokies’ latest addition. At 6-7, graduate transfer Justyn Mutts averaged a team-high 8.4 rebounds for Delaware last season. Only one other Blue Hen attempted as many free throws.

Iowa graduate transfer Cordell Pemsl, a rugged 6-9, 248 pounds, led the Hawkeyes in free throw attempts and rebounds per minute as a freshman in 2017. Overall, he averaged 8.9 points, 5.0 boards and 19.8 minutes that year.

To lend some context to Pemsl’s free throw attempts: Landers Nolley led Tech with 109 in 967 minutes last season. Pemsl had 120 in 655 minutes as an Iowa freshman.

Keve Aluma is the Hokies’ third frontcourt transfer. He played two seasons for Young at Wofford and was the No. 2 rebounder (6.8 per game) on the 2019 Terriers team that went 30-5 and humbled Seton Hall in the first round of the NCAA tournament.

The 6-9 Aluma sat out last season at Tech per NCAA transfer rules but made his presence known during practices — and then some.

“I love his game,” Young said during an offseason Zoom session with reporters.

“That makes me sick to my stomach, really and truly, not getting fouled more,” Young said. “We’ve got to do a better job putting pressure on [defenses]. We didn’t really have — Wabissa [Bede] would be the exception — a guy who could get into people, get the ball in the middle of the paint and spray it out.

“Obviously we didn’t have a back-to-the-basket player that we would expect to get four to six foul shots from on a given night. I do think that area will be much improved. It needs to be. You can’t rely on that [3-point] bomb night-in, night-out.”

Interior scoring threats are one way to earn free throws, and Kerry Blackshear’s transfer to Florida prior to last season left Tech’s frontcourt painfully thin. The 6-7 Nolley and 6-10 John Ojiako represented the only size in the Hokies’ rotation, and Nolley was more comfortable on the wing, while Ojiako was too raw and foul-prone.

Nolley transferred to Memphis, but Ojiako, Aluma, Pemsl, Mutts and 6-8 freshman David N’Guessan give the Hokies five scholarship players standing at least 6-7 for the first time in five seasons — that nugget researched and tweeted by David Cunningham, a student in Tech’s sports media and analytics program.

That group also should improve the Hokies’ rebounding. Tech ranked 305th nationally last season in rebounding margin at minus-3.3 per game and 340th in offensive rebounding percentage.

The question becomes: How predictive are rebounding margin and free throw ratio?

Well, only six of the 50 teams ranked below 300th in rebounding margin last season, most notably 19-12 Texas and 20-12 Arkansas, had winning records. Seven of the top 50 had losing records, headlined by North Carolina — national title contenders Gonzaga, Kansas, Michigan State, Duke, Louisville and Auburn also were among the top 50.

Free throw ratio wasn’t nearly as predictive last season. NCAA tournament locks Virginia, Villanova, Wisconsin and Brigham Young, plus 19 other squads with winning records, were among the bottom 50. Sixteen of the top 50 in free throw ratio had losing records, including Chicago State and Houston Baptist, both 4-25.

Virginia Tech appeared destined for a winning season in 2020 before a closing 2-11 slide punctuated by a 78-56 setback against North Carolina in the ACC tournament. But with an influx of talent that also includes guard Cartier Diarra, a Kansas State graduate transfer, Young is rightfully optimistic.

Relying on transfers to sustain a program long-term is difficult, but as Buzz Williams showed with Zach LeDay and Seth Allen early in his Hokies tenure, they can be invaluable cornerstones.

“We’re not there completely,” Young said before Mutts’ arrival, “but I do feel a lot better in a number of areas. We will be deeper [next season]. We will be bigger and stronger. … I like our skill level. I think we’ve made our team better.”

Former Iowa player Cordell Pemsl (right) should help the Hokies on the boards and in getting to the free throw line.

Virginia Tech head coach Mike Young in the first half of the Virginia Tech — University of North Carolina NCAA basketball game in Blacksburg on . Wednesday.