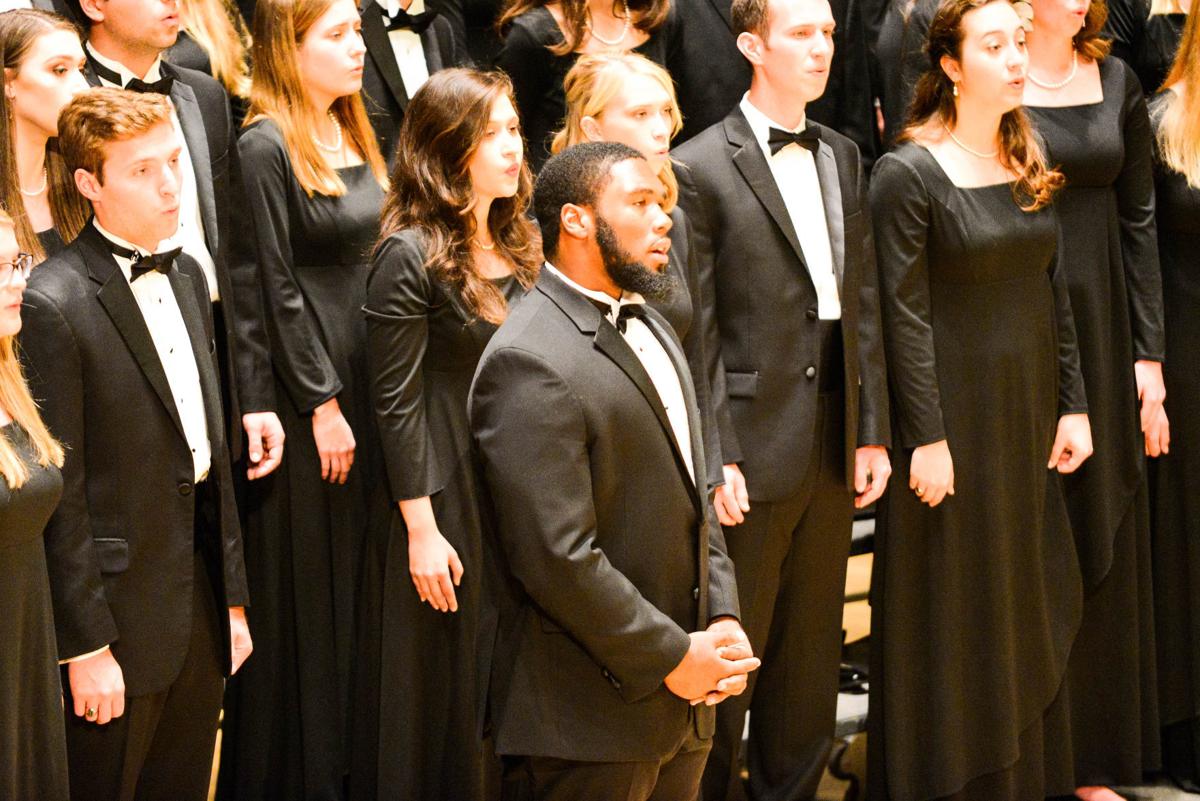 Virginia defensive tackle Jowon Briggs, a rising sophomore, says he loses himself in his music as he performs with the University Singers. 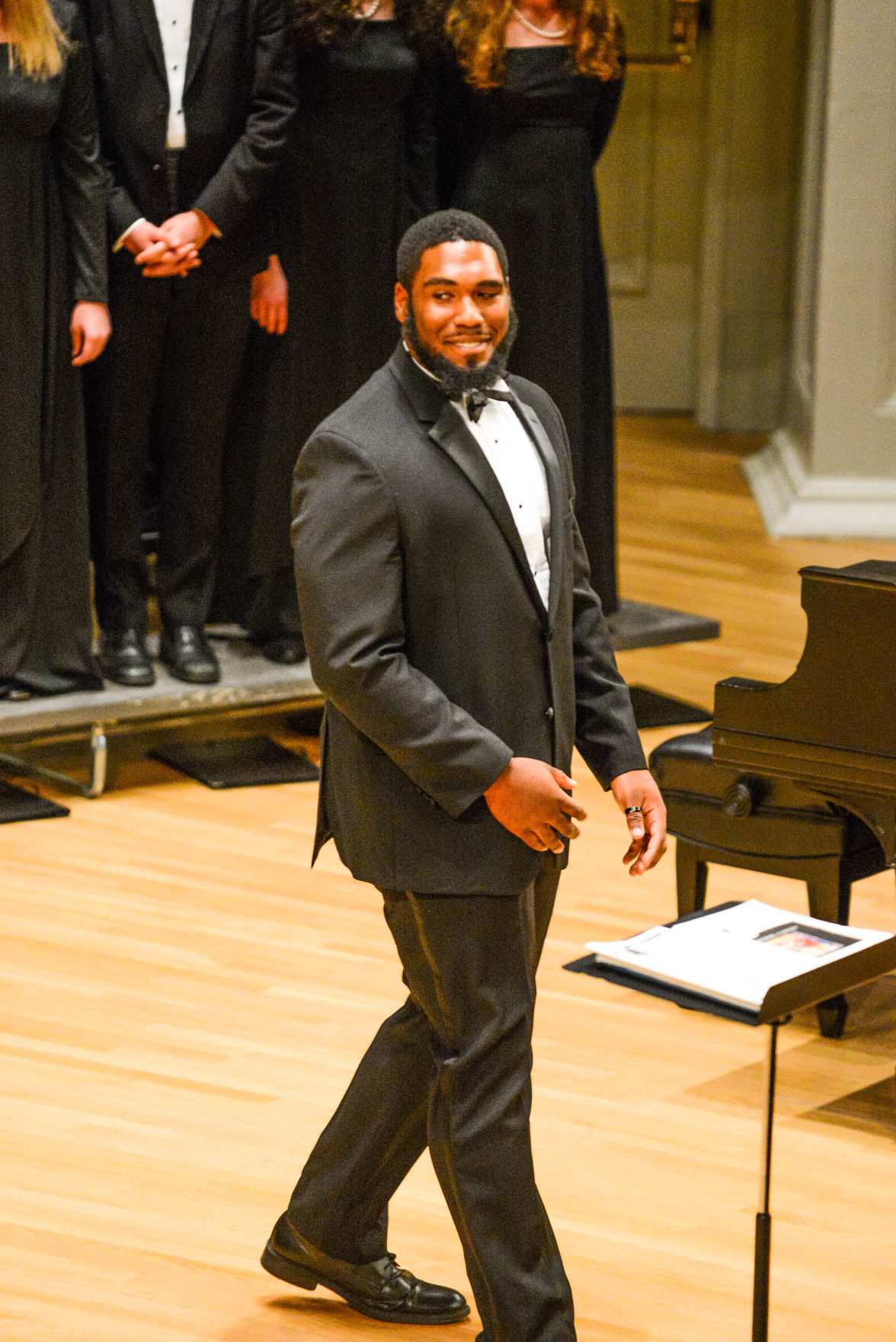 Jowon Briggs takes the stage as a member of the UVA University Singers.

CHARLOTTESVILLE — The shining lights and staring eyes hit Jowon Briggs as soon as he steps out to perform.

Once the Virginia rising sophomore football player begins to belt out the high notes as a tenor for the UVA University Singers ensemble, he blocks out all that and loses himself in the music.

“When I’m singing, especially a solo, when you first walk out on the stage you see all the bright lights. You realize there’s the audience, but you can’t see individual faces,” said Briggs from his family’s Cincinnati home. “As you start to sing, it all melts away. I become enveloped in the sound and enveloped with the people I’m singing with.”

On the football field, Briggs said things work in reverse. He doesn’t take note of the crowd until he’s done something worthy of applause.

“Say I make a tackle or I make a sack, that’s when I really realize everybody’s watching,” the massive defensive tackle said. “So there’s not much of that melting away in football. They’re always there, but when you do something, that’s when you really know they’re there.”

As a freshman, Briggs made his presence known on the field and the stage. He is just the second football player to earn a spot with the UVA University Singers in professor Michael Slon’s nearly 20-year tenure directing the ensemble.

The first was reserve offensive lineman Jeff Schrad, Slon said. Schrad graduated in 2006 after seeing limited playing time. Briggs played in 13 of Virginia’s 14 games this past season as a true freshman, starting seven and helping the Cavaliers go 9-5, win the ACC Coastal Division and earn a spot in the Orange Bowl.

Slon, the university’s director of choral music, praised UVA football coach Bronco Mendenhall’s “‘football and… philosophy’ which encourages players to set their sights beyond the field, to engage in other activities that could be high points of a university education.”

Despite what Slon recognizes as a “highly demanding” football schedule, Briggs proved to be a dependable asset for the Singers. Briggs even caught a break last season when the group’s fall concert series happened to fall during the football team’s open date.

The 19-year-old Briggs finished his rookie season with 19 tackles and a sack.

“He’s got a lot of potential,” said Eli Hanback, a senior defensive tackle on last year’s team. “He’s very, very strong, very athletic. And he’s a real smart kid, too. I think his upside, his ceiling is very, very high. I’m looking forward to seeing what he can do, because even as a true freshman, he was manhandling some dudes in practice and even in games.”

Briggs came to UVA big, one of the reasons he was able to play right away, weighing just under 300 pounds. During this COVID-19-forced time away from campus, he’s worked to get even bigger. Briggs said he wanted to see how much more muscle weight he could add to his 6-foot-1 frame.

Through aggressive caloric intake — eating a lot — and lifting weights, he reached 320 pounds. He says he’s now worked down to 315 pounds of lean muscle. The point, he said, was to get as big and strong as possible without sacrificing his mobility and agility.

He hopes his strength gains coupled with his first season’s worth of experience will help him triple his statistical production this coming year.

Briggs was a four-star prospect coming out of high school after starring at Walnut Hills. He had scholarship offers from everywhere, from Alabama to Wisconsin, and all the Ohio States and Michigans in between.

He picked UVA, in part, because of the relationship he forged with former defensive line coach Vic So’oto. Briggs, who held part-time jobs all through high school, said So’oto would phone him at the end of every night, after Briggs’ shift as a manager at a local soup and sandwich restaurant ended.

Briggs was the highest rated recruit in Virginia’s 2019 signing class.

To Slon, he was an equally impressive prospect musically.

“He is better than just an average-talent singer,” Slon said. “He has a musical gift, perhaps equal to his gifts on the field.”

Briggs’ musical talent isn’t limited to his vocals. He plays about a dozen instruments, from the acoustic guitar to violin. He said he picked up many of the instruments from his four older sisters, all of whom are also musically inclined.

His younger brother has gotten him into electronic, synthesized music, and the two have been recording songs while Briggs is home from school.

Briggs’s most recent addition to his personal instrument collection is an Ibanez five-string bass he bought back in Cincinnati. Next, he hopes to acquire a drum set or learn to play the sitar, a string instrument with Indian and Pakistani roots.

Briggs is also fascinated by computer science and astrophysics. He likes to compare himself to a file cabinet — each drawer holding another part of his eclectic interests.

“I kind of like to collect experiences from doing different things,” Briggs said.

Virginia defensive tackle Jowon Briggs, a rising sophomore, says he loses himself in his music as he performs with the University Singers.

Jowon Briggs takes the stage as a member of the UVA University Singers. 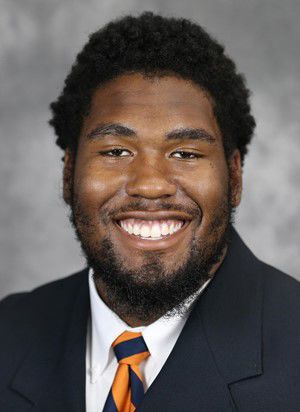 Jowon Briggs has made himself an asset with the UVA University Singers.