Refusing to teach in-person, a Falling Creek Middle teacher's job was in limbo for weeks. Now back virtually, she wants to create a safe space for teachers 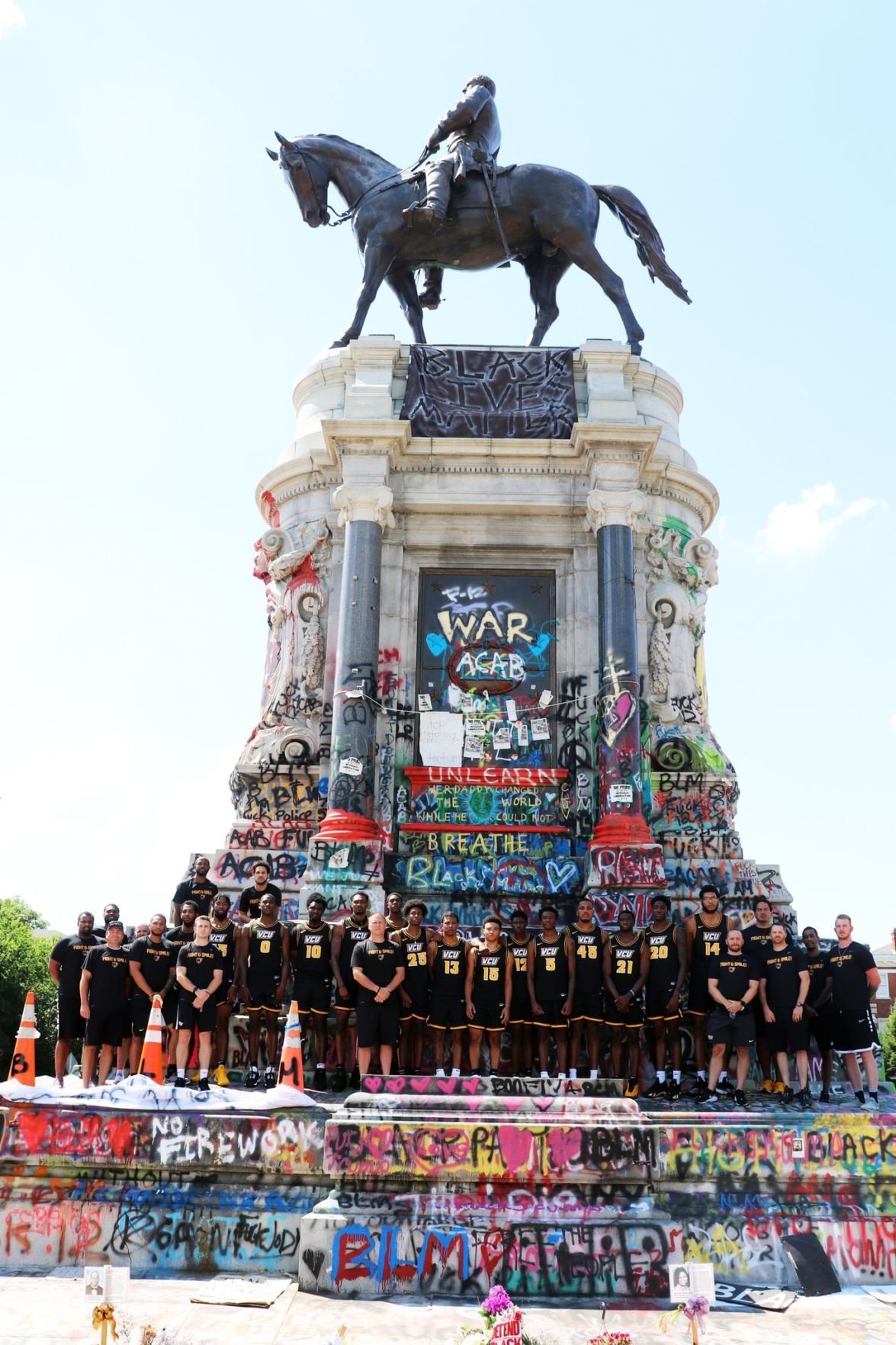 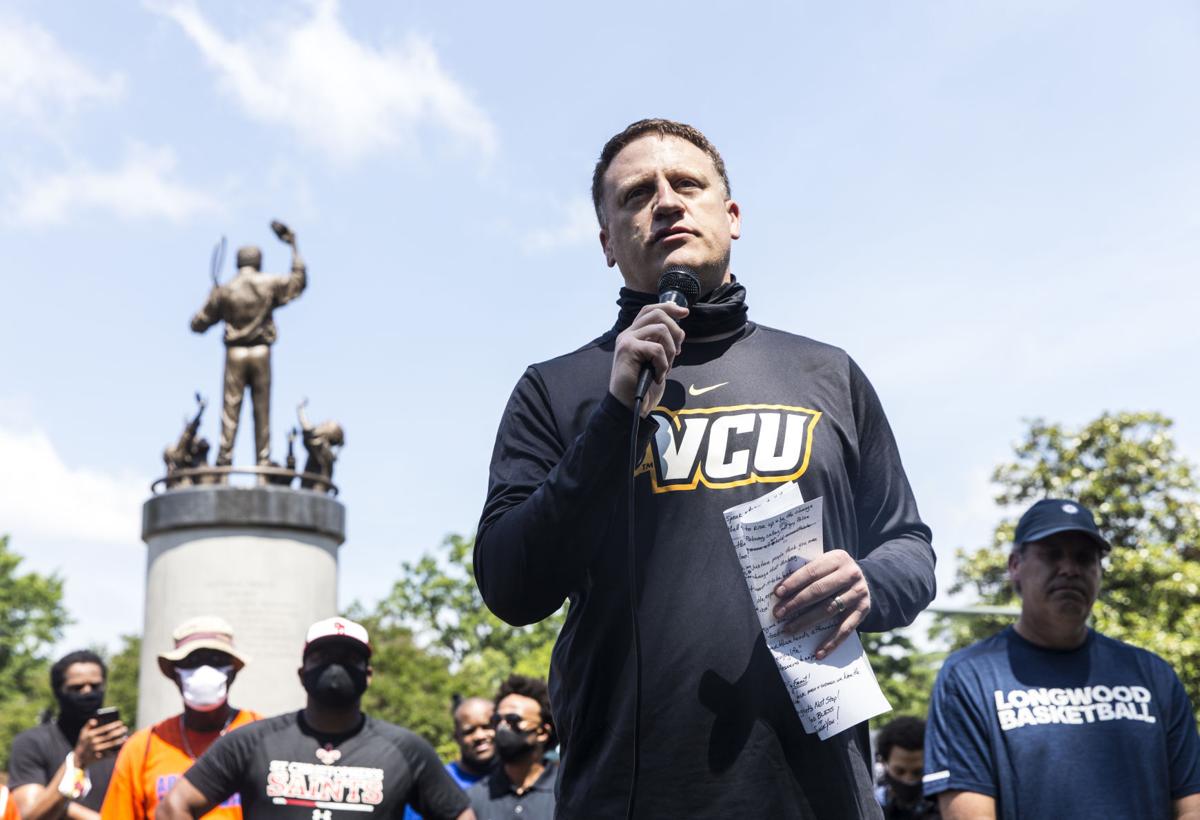 Over the past several weeks, the Robert E. Lee statue on Monument Avenue has taken on new symbolism.

The 130-year-old monument to the Confederate general — since protests broke out against police brutality and racism in the aftermath of the May 25 killing of George Floyd — has been coated by protestors with colorful layers of spray-painted messages. At night, the monument will morph into the surface for projections of a variety of images and messages, from a picture of Floyd to a picture of Harriet Tubman to video of Martin Luther King Jr.’s “I Have a Dream Speech.”

The grassy area that surrounds the monument has been informally named Marcus-David Peters Circle, in reference to the 24-year Essex High School biology teacher and VCU graduate who was shot and killed by Richmond police in the midst of a mental health crisis in 2018.

It’s a patch of land that’s become a small community of sorts, and a gathering spot. One can find a garden sprouting up there, volunteers grilling food and a basketball hoop in place.

VCU’s men’s and women’s basketball programs are headquartered less than a mile away from the statue, at their Basketball Development Center on West Marshall Street. Members of the men’s team began returning to campus for workouts in early June.

Since Floyd’s killing, VCU men’s basketball coach Mike Rhoades has fostered conversation surrounding the social issues that have sparked the current movement, and he’s listened to what his players have to say, including ideas on what they can do as a group.

So when senior forward Corey Douglas came to Rhoades a couple of weeks ago and informed him that the team was interested in visiting Marcus-David Peters Circle, Rhoades was on board. On Tuesday, they stopped by.

From the visit emerged an image of solidarity. The entire program — including VCU vice president and director of athletics Ed McLaughlin, graduate assistants, support staff, coaches and players in game uniforms — gathered on the monument’s graffitied pedestal for a group picture.

The picture was posted to the program’s Twitter account with a quote from former president Barack Obama: “Change will not come if we wait for some other person or some other time. We are the ones we’ve been waiting for. We are the change that we seek.”

The team stayed at Marcus-David Peters Circle for 20-30 minutes Tuesday, taking pictures, interacting with others there and shooting hoops on the basket perched adjacent to the statue.

“They believe that everybody should be treated fairly. And they want to make a change against social injustice and racism. And, me as their coach, I’m going to be arm in arm with them,” Rhoades said of his players, discussing why it was important to him that VCU made Tuesday’s visit as a team.

Rhoades has used his platform and made his own voice heard in recent weeks, too, including at a protest featuring coaches from around the state that was organized by a new area group, 804 Coaches for Change, and held at the Arthur Ashe statue on Monument Avenue on June 6.

There, Rhoades gave a 3-minute address to those gathered.

Rhoades, assistant coach Brent Scott and director of player development Darius Theus attended another coaches rally in Newport News on June 27. And Rhoades and staff participated in a virtual discussion hosted by Washington, D.C.-based AAU club Team Takeover at the end of June and early July, which featured a variety of other coaches.

With the VCU players back on campus, Rhoades — who was a history major in college at Lebanon Valley in Annville, Pa. — put together a curriculum for them on the history of racism and on social injustice.

“I want our guys to be able to express themselves and how they feel, but also learn a lot about this,” Rhoades said. “So, the more knowledge you have of all this and understanding the history of all this, the more power you have.”

The curriculum will include classroom-style informative sessions and guest speakers, and is set to start next week. Among the guests Rhoades wants are elected officials, and candidates for office.

Another piece of it is an action plan. Rhoades said he wants all his players registered to vote and 100% voting participation by everyone in the program.

“Even if it’s an absentee ballot from home. Or here in Richmond. We would love everyone to participate,” said Rhoades, whose late father, James, was a seven-term Pennsylvania state senator. “And we also want to spread that message to everybody on our campus who’s able to vote, and in the RVA, of getting out to vote. And voting makes changes.”

As those plans get put in place, Rhoades said the players have done a good job of attacking workouts and summer school academics since they’ve been back. Teams are still in a period of voluntary work due to the COVID-19 pandemic but, last month, the NCAA approved July 20 as the date teams will be permitted to begin required activity. VCU will start those at 1 p.m. Monday.

On Tuesday, though, the basketball took a backseat for a bit.

“I believe in our guys,” Rhoades said. “And I’m going to be arm in arm with them.”