R-MC in 1975 paused John Thompson's rise with Hoyas. Ejected early, he 'peeked' at upset.
1 comment
Share this
1 of 3 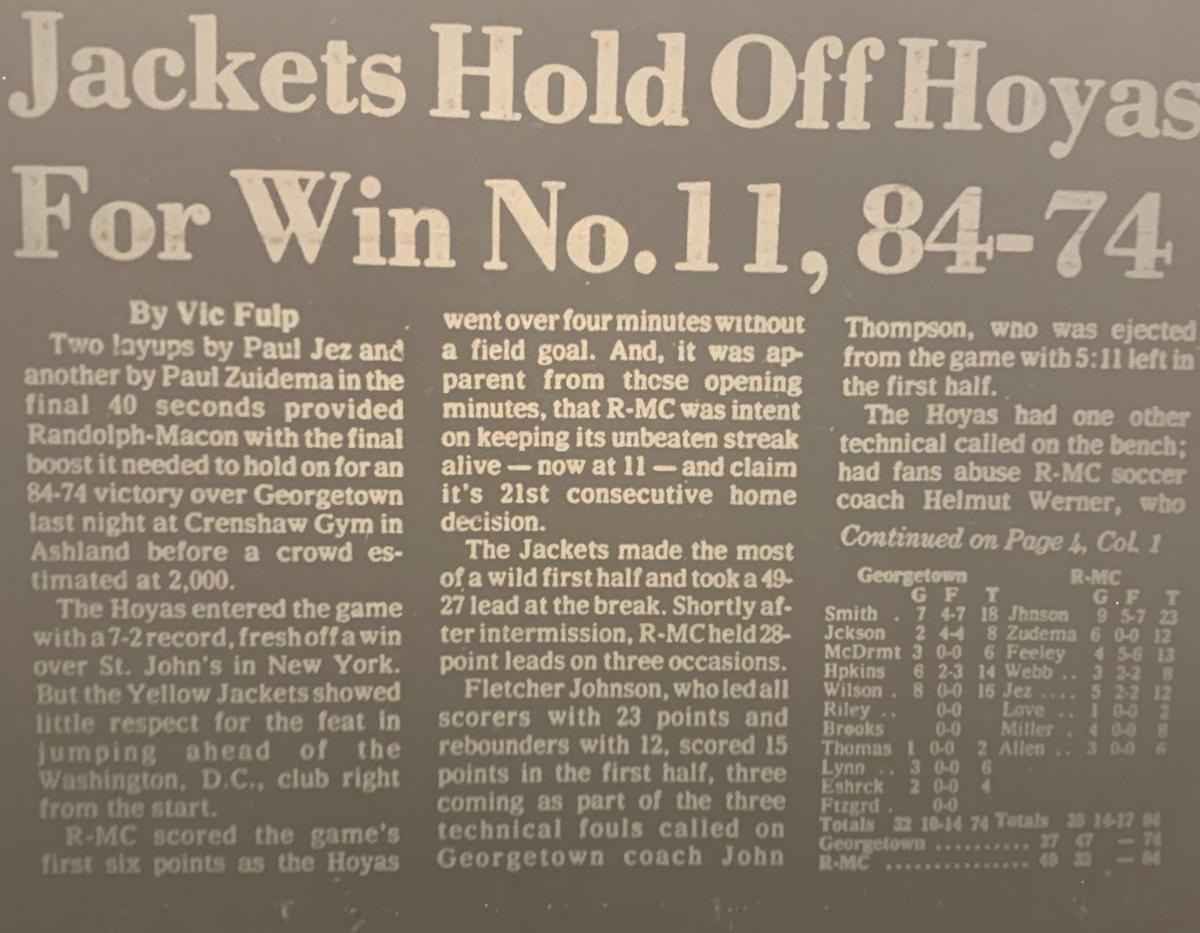 The Richmond Times-Dispatch on Jan. 12, 1975, recognized R-MC's win over Georgetown. 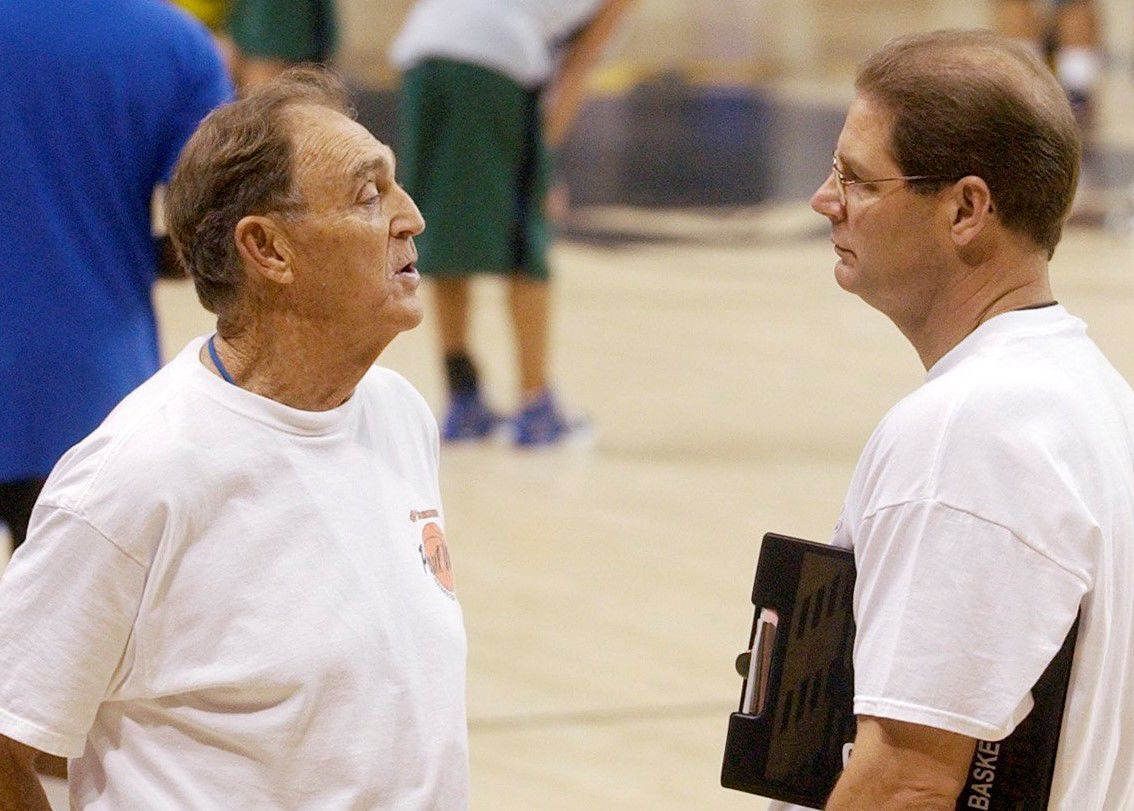 “People today don’t understand how good Division II was back then. Look at the people we were playing, Mount St. Mary’s, Loyola, UMBC, Towson … All those guys went Division I.”

Former R-MC guard Eddie Webb, seen in 2005 with his dad and former coach Paul Webb (left), on the Yellow Jackets beating Georgetown in 1975 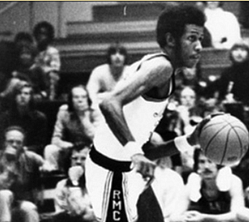 John Marshall High grad Fletcher Johnson starred during the 1974-75 season for Randolph-Macon, and is the program’s all-time leading scorer.

The legacy of coach John Thompson, who died Aug. 30 at 78, is elevation of Georgetown basketball from a national nothing to a national power. That rise was interrupted on Saturday, Jan. 11, 1975, at Randolph-Macon.

The Yellow Jackets, then Division II, upset Thompson’s Division I Hoyas 84-74. Georgetown was 7-2 at the time and beat St. John’s in New York the previous week. Thompson, in his third season as Georgetown’s coach, saw only about 15 minutes of the game in Ashland from the bench area.

He drew three technical fouls in the first half and was ejected 5:11 before intermission. R-MC took a 49-27 halftime lead by shooting 54.1% in front of an overflow crowd of 2,000 at Crenshaw Gymnasium.

Eddie Webb, a guard on that R-MC team coached by his father, Paul Webb, on Wednesday recalled Thompson “stepping out on the court and trying to intimidate those [officials]” after one particular call. The officials responded by tossing Thompson.

“If you’re familiar with [Crenshaw Gymnasium], at the far end, there was a door that led back to the visitors’ locker room,” Eddie Webb said.

“For the rest of the game, [Thompson] stood in that hallway peeking his head through that door crack to watch the game.”

R-MC led by 28 with 15:36 left. The Hoyas applied heavy pressure to reduce Macon’s lead, but the Yellow Jackets stayed strong at the end for one of the most notable wins in program history. It’s up there with the 71-64 win at Richmond in 1977.

The Yellow Jackets “have had some great wins, but when you’re talking about [Georgetown] being an established Division I program that had the name and the star power that they did — and they certainly went on to take it much, much higher than that — I don’t know of anybody else that Macon beat that you would put on the same scale,” Eddie Webb said.

It’s incomprehensible in today’s college basketball landscape that a Division I team would hit the road to play a Division II team. Back in the late 1960s and early 1970s, Randolph-Macon and Georgetown regularly met, on both campuses. The Hoyas at that time played at their McDonough Arena.

“I think coming down here, they didn’t expect too much since we are a small school,” R-MC guard Paul Jez, who scored 12 in the 1975 win, told The Times-Dispatch after the game.

“That was a good team we beat,” said Johnson, a John Marshall High alumnus who went on to become the coach at Armstrong-Kennedy and Kennedy high schools, after the game.

He was right. Though that loss at R-MC started a six-game losing streak for Thompson’s Hoyas, they bounced back to win the ECAC South tournament and advance to the NCAA tournament. Georgetown hadn’t been to the NCAA tournament in 32 years, and finished the season 18-10, with wins over Syracuse, Boston College, and West Virginia.

That was Thompson’s first NCAA tournament team, and it qualified for a field of 32. The Hoyas and Yellow Jackets haven’t played since that game.

“When they came in, it was obviously a packed gym and I don’t think John Thompson had any idea how good we were,” said Eddie Webb, a VCU assistant coach from 1985-95 and the president of the Virginia Sports Hall of Fame for 24 years before his 2019 retirement. “He hadn’t ventured south of the nation’s capital for many games, let’s put it that way.”

Randolph-Macon came into that game 10-0 on the way to one of the top seasons in program history. The Yellow Jackets finished 27-3, with a loss at Virginia State and two to Old Dominion, which eliminated R-MC in the Sweet 16 of the D-II NCAA tournament and won the national championship.

“Look at the people we were playing, Mount St. Mary’s, Loyola, UMBC, Towson … All those guys went Division I.”

In the early 1990s, R-MC basketball shifted to Division III, primarily because of the lack of Division II opponents in the region.

The Richmond Times-Dispatch on Jan. 12, 1975, recognized R-MC's win over Georgetown.

“People today don’t understand how good Division II was back then. Look at the people we were playing, Mount St. Mary’s, Loyola, UMBC, Towson … All those guys went Division I.”

Former R-MC guard Eddie Webb, seen in 2005 with his dad and former coach Paul Webb (left), on the Yellow Jackets beating Georgetown in 1975

John Marshall High grad Fletcher Johnson starred during the 1974-75 season for Randolph-Macon, and is the program’s all-time leading scorer. 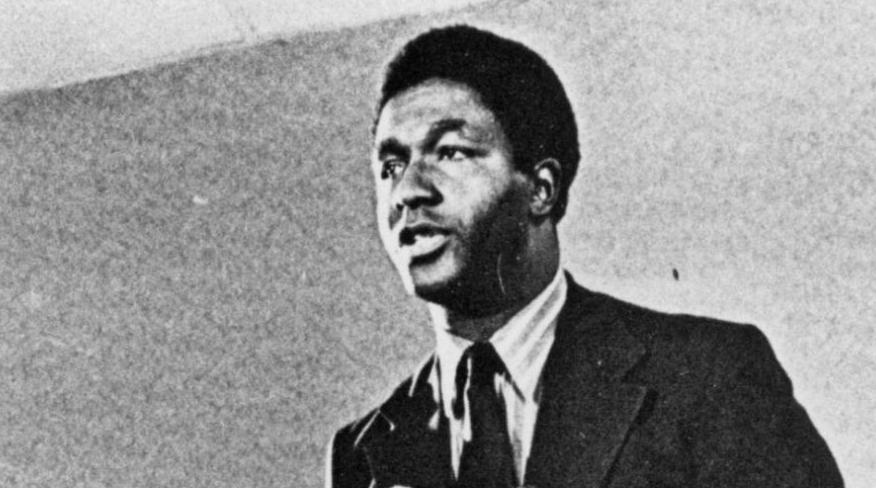 John Thompson was named Georgetown’s coach on March 14, 1972. He was ejected during the Hoyas’ loss to then-Division II R-MC on Jan. 11, 1975, at Crenshaw Gymnasium. 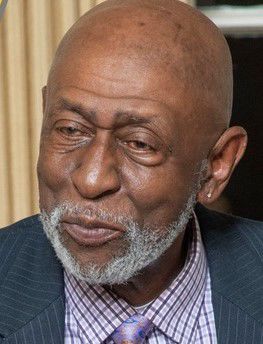 Fletcher Johnson had 23 points and 12 rebounds in R-MC’s victory over Georgetown.