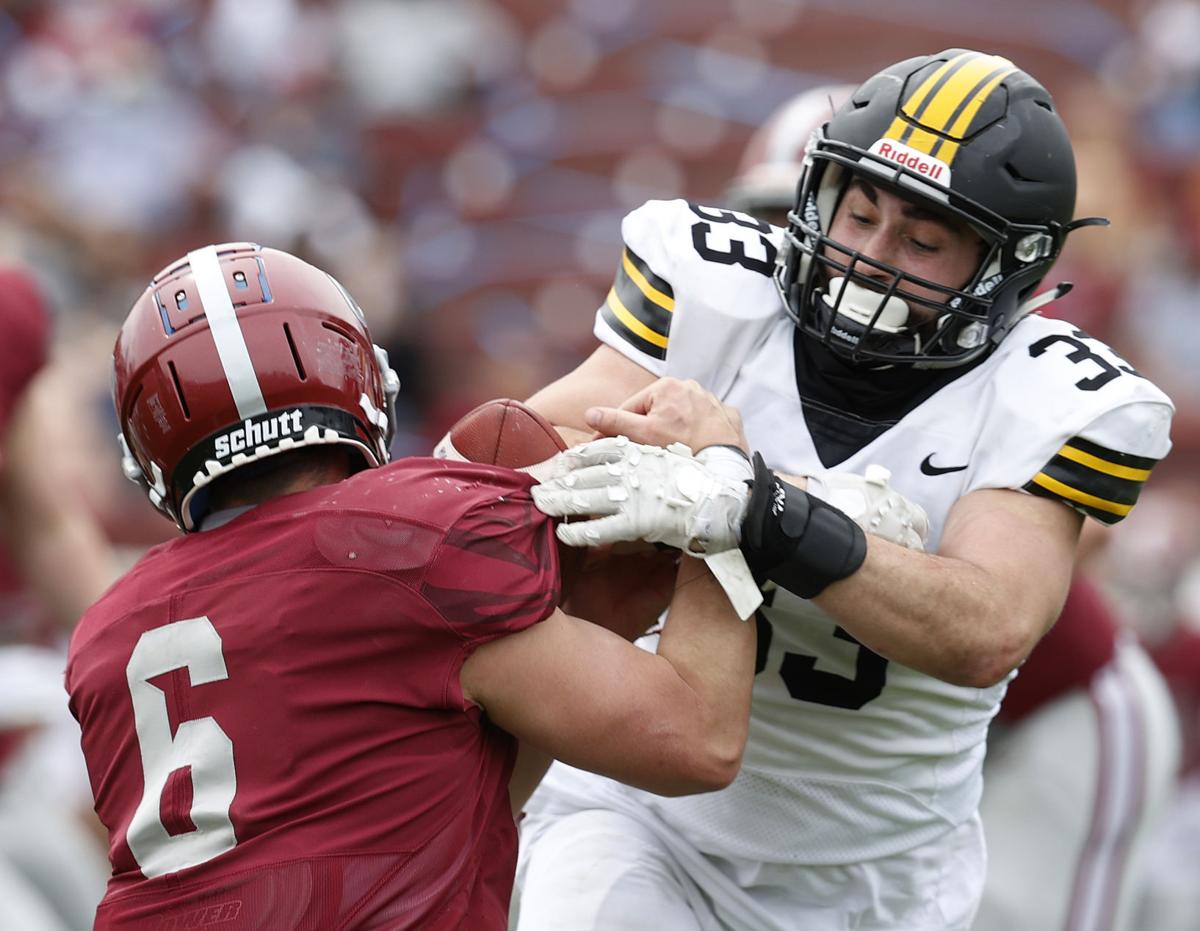 R-MC’s Matt Vergara pressures Hampden-Sydney quarterback Sydney Tanner during their game in Farmville. The Yellow Jackets overwhelmed the Tigers in a battle of unbeaten rivals. 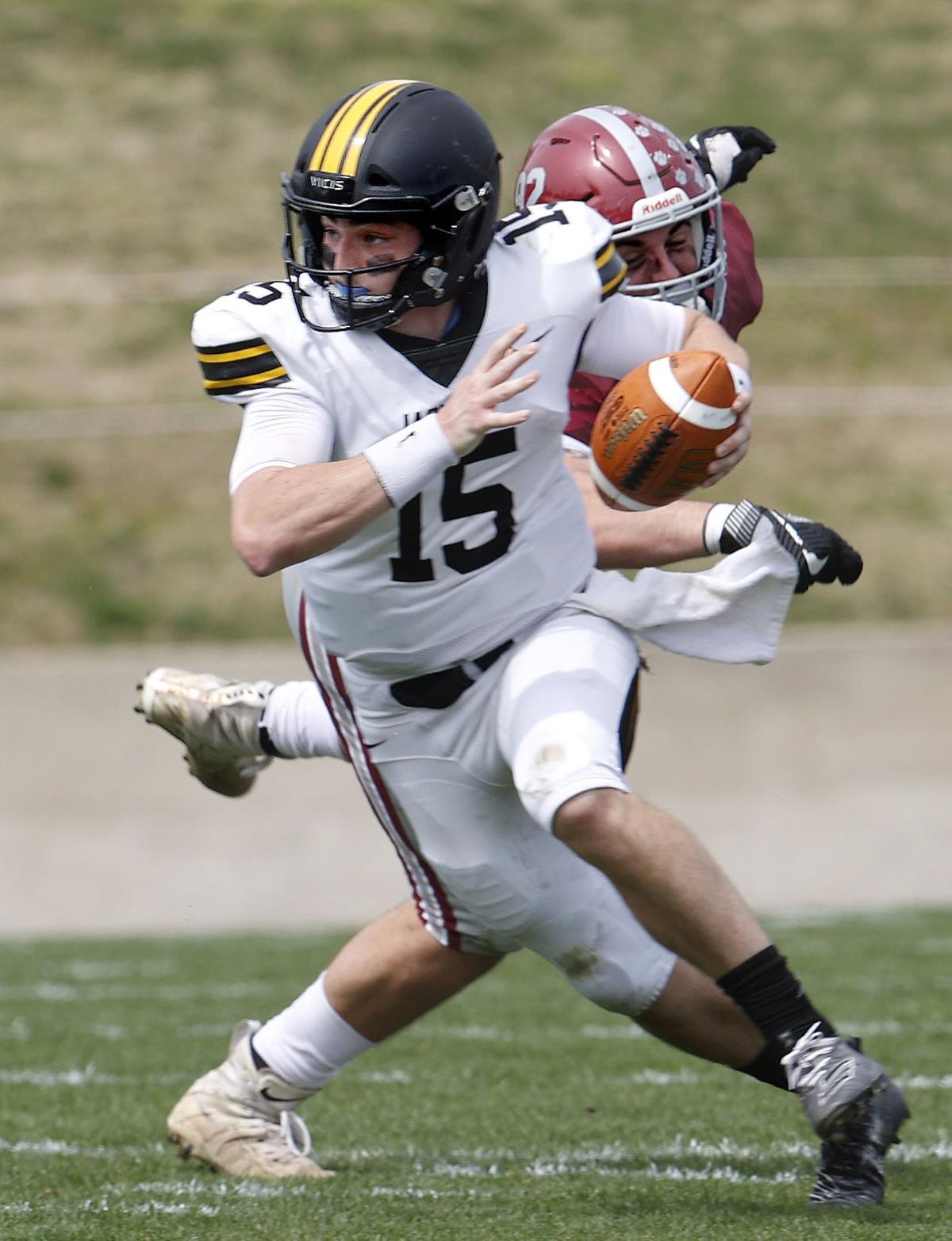 Randolph-Macon’s Presley Egbers dodges a tackle by Hampden-Sydney’s Tyler Lohman. The quarterback was responsible for all four of the Yellow Jackets’ touchdowns — two through the air and two on the ground. 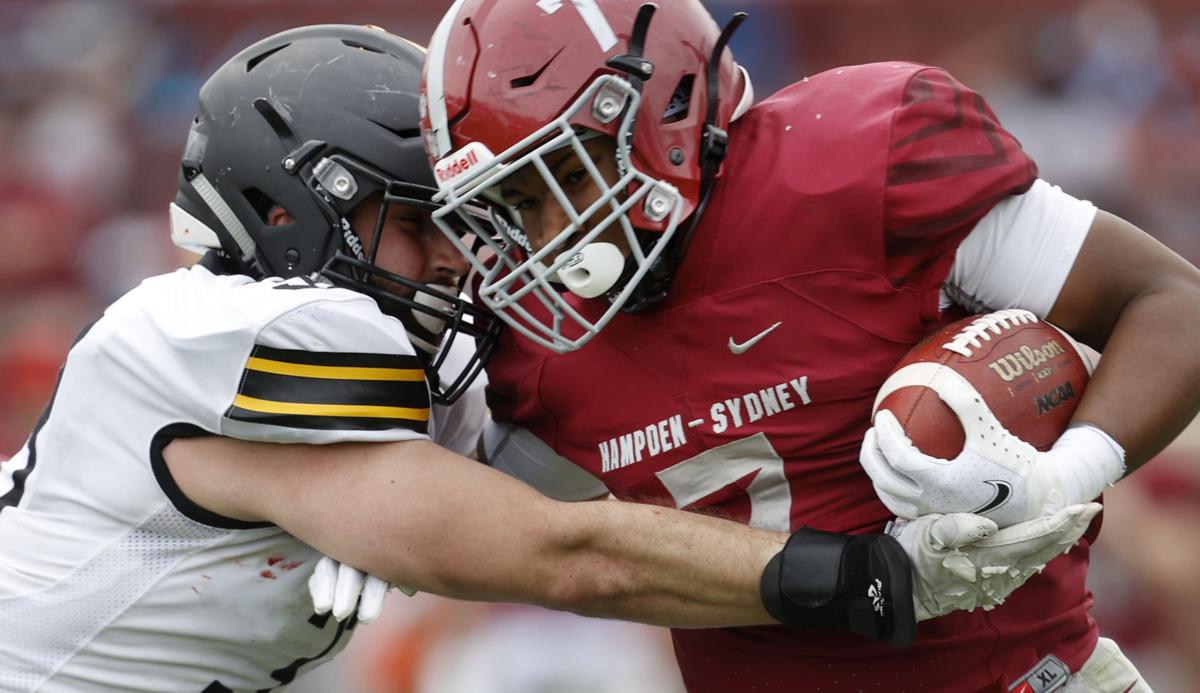 FARMVILLE — Saturday’s faceoff saw effective defenses from both Randolph-Macon and Hampden-Sydney, but early scores propelled Yellow Jackets to a 28-0 win in the 125th edition of The Game at Lewis C. Everett Stadium.

The win extended the Yellow Jackets’ winning streak against their rivals to seven, something R-MC head coach Pedro Arruza said his program takes pride in.

“It’s always a win that feels great to win,” Arruza said. “We put a lot of effort, a lot of sweat and work into this rivalry. It’s a big deal to us.”

R-MC and H-SC entered the game with matching 3-0 records. But, after marching his team down to the Tigers’ 6-yard line, sophomore quarterback Presley Egbers connected with freshman Ricky Mayfield (Goochland) for the first touchdown of the day. He ran for two more before halftime.

With so many young players in skill positions, both Arruza and Egbers commended their team’s defense and senior leaders.

“We’re a young team, but we’ve got a lot of great chemistry and great leadership,” Egbers said. “Joe Glass, our captain, has been doing a great job all year rallying us with everything that’s going on, and that’s why we’re here today with a chance to fight for a championship.”

While the Yellow Jackets rallied for 349 offensive yards, their defense capped the Tigers at 97.

Senior Tyler DeBerry led the team with 10 tackles and an interception. Matthew Vergara and Jacob Hutchinson had five tackles apiece and combined for six tackles for loss, totaling 24 yards.

The Tigers’ defense was kept busy as well. Freshman Will Pickren nearly doubled his full-season output with 14 tackles, and seven of his teammates also made five or more tackles.

The game evened out coming out of intermission. Junior quarterback Tanner Bernard was able to build some momentum for HS-C, and both teams were held close.

Macon’s offense picked up again in the fourth, and despite some decent chances for its opponents, another 19-yard throw from Egbers to Wallis provided the final scoring for the game with a little under seven minutes left on the clock.

Along with bragging rights, the win also secured the Yellow Jackets’ spot at the ODAC championship, where they will play Emory & Henry (3-0) on April 2. The Tigers will play in a runners-up game April 3.

Arruza said, along with the usual high stakes in a rivalry match late in the season and despite some concerns about being worn down for a fall season, that being able to play football at all this spring has been a relief to his team.

“With everything we’ve been dealing with during the pandemic and losing football in the fall, it was crushing to a lot of these guys,” Azzura said. “… At the end of the day, it’s been a tremendous lift to our guys mentally and emotionally.”

R-MC’s Matt Vergara pressures Hampden-Sydney quarterback Sydney Tanner during their game in Farmville. The Yellow Jackets overwhelmed the Tigers in a battle of unbeaten rivals.

Randolph-Macon’s Presley Egbers dodges a tackle by Hampden-Sydney’s Tyler Lohman. The quarterback was responsible for all four of the Yellow Jackets’ touchdowns — two through the air and two on the ground.