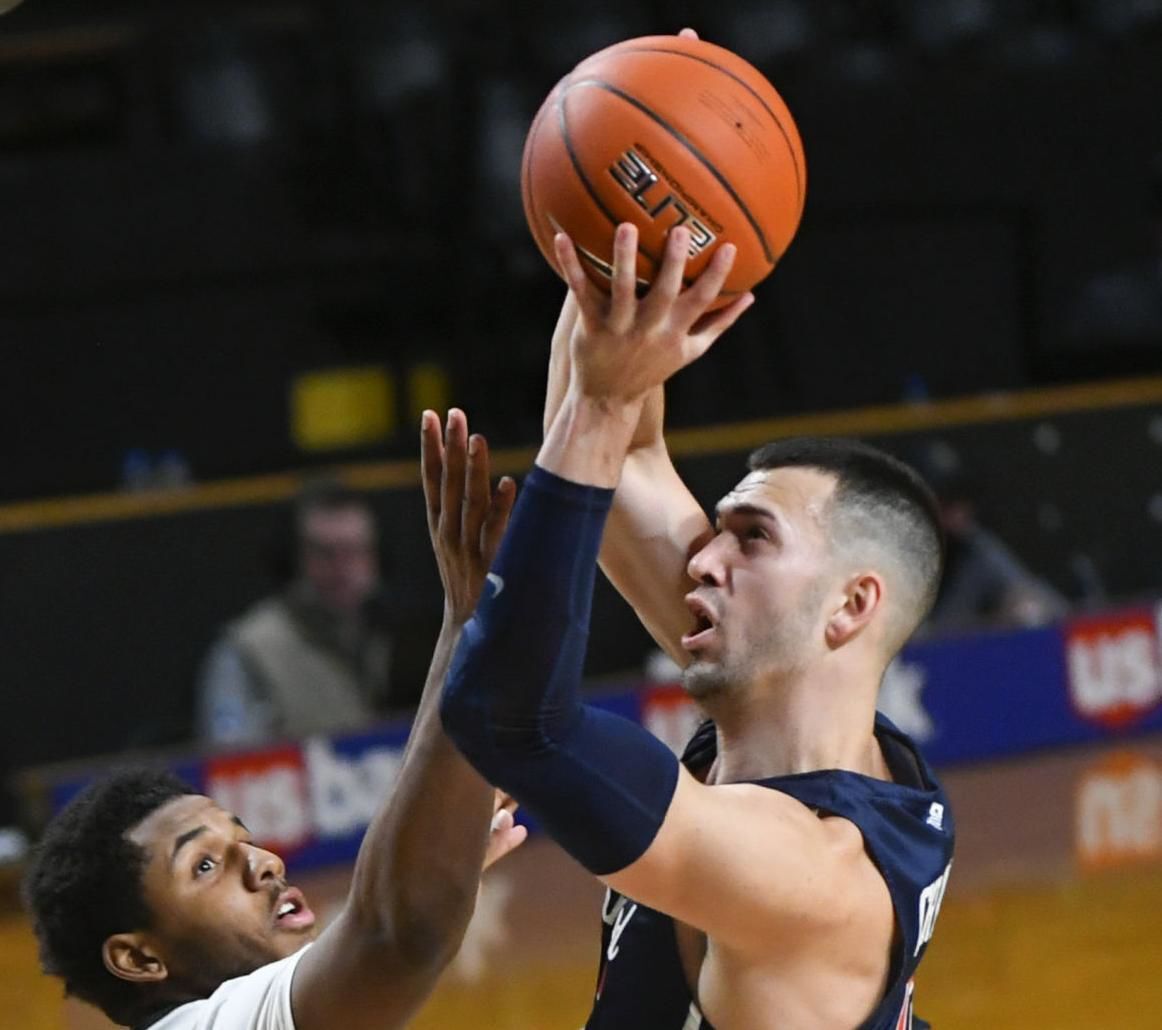 Richmond’s Connor Crabtree, a 6-6 transfer from Tulane, heads into his third year at UR having played in four games. Injuries have repeatedly interrupted his Spiders career. 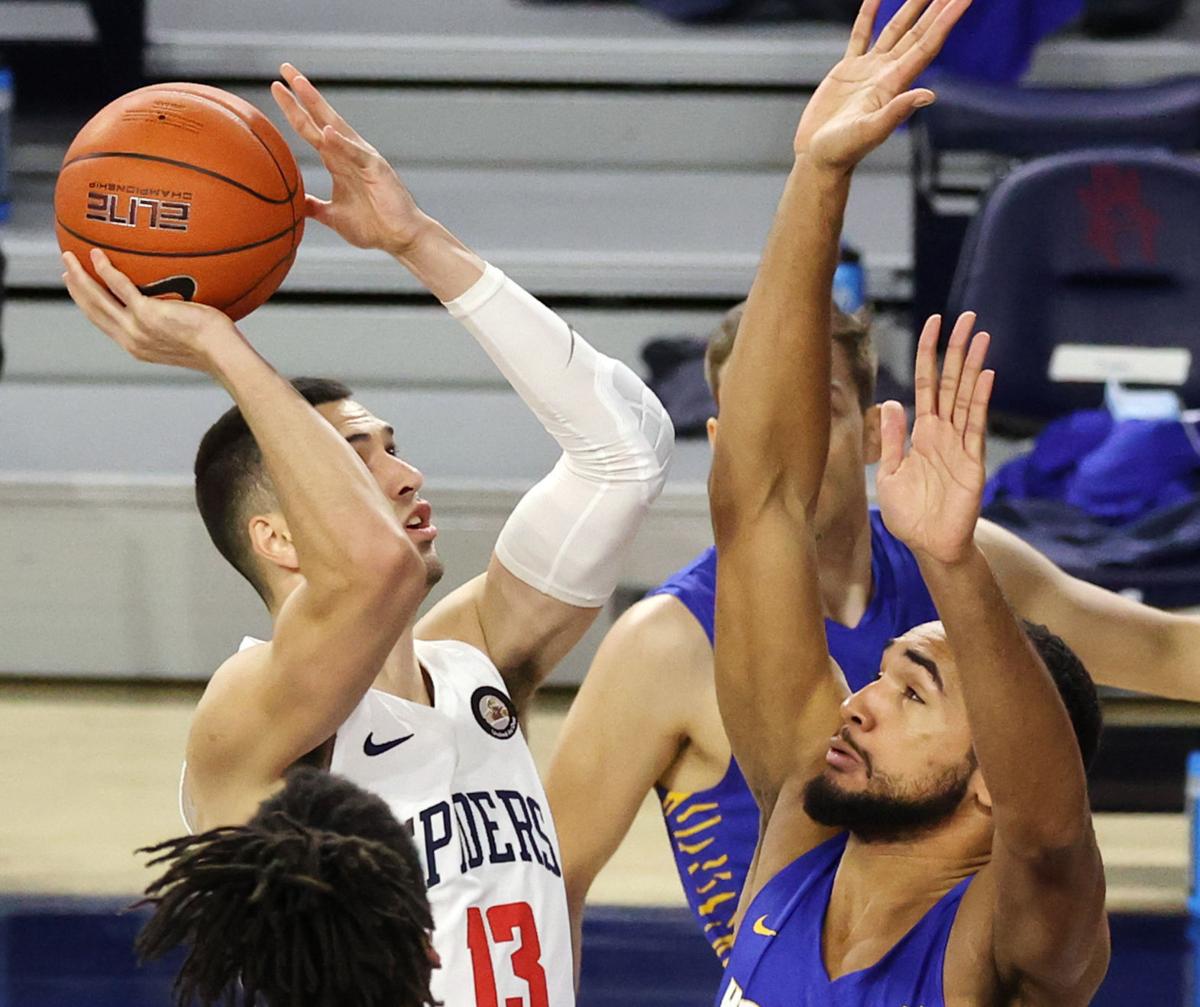 UR’s Connor Crabtree was challenged by Hofstra’s Kevin Schutte at the Robins Center last season. Crabtree missed most of the season with a groin strain and stress fractures in his right foot.

Connor Crabtree kept his number. Triskaidekaphobia, fear or avoidance of No. 13, clearly is not an issue for the University of Richmond guard with a star-crossed past as a Spider.

Crabtree, a 6-foot-6 redshirt junior, dealt with a surgery on each hip soon after transferring from Tulane in May of 2019. While rehabilitating, he sat out his first season at UR. Crabtree missed the first four games of last season with a groin injury, played in four games, and then was diagnosed with stress fractures in his right foot. That ended his year.

“Hasn’t been too smooth sailing,” said Crabtree, a resident of Hillsborough, N.C., who made 15 starts as a Tulane freshman.

Those hip surgeries required the use of crutches for more than a month, and involved a long recuperation process.

“It was stop and go from there,” Crabtree said Monday, his 22nd birthday. “Definitely very frustrating.”

The groin issues and the foot problems in some ways could have been related to Crabtree’s comeback from the hips surgeries, he believes. Maybe he pushed a bit too hard while recovering, and that mixed with some bad luck, Crabtree suggested Monday. With the series of injuries, he wasn’t sure if he would suit up again.

“I’ve got a couple of years left and I’m definitely trying to play it super-smart, since we’ve got a little time here before the season starts,” he said. “This summer, as badly as I really want to jump into those live segments and go hard, I’m really trying to be smart because I know I don’t want something to happen again.”

Richmond’s bench area during last season’s two-game National Invitation Tournament run in Denton, Texas, presented a somber scene, even when the Spiders were effective against Toledo (a UR win), and Mississippi State (a UR loss).

Golden, Nelson and Crabtree are currently involved in full team workouts, without restrictions in most cases. Sherod, who missed two seasons of his college career with knee issues (different knees, same injury), continues to rehabilitate and began shooting last week. There is optimism at Richmond that Sherod, a three-year starter, will be physically cleared for full activity before the season begins.

Crabtree’s goal is to start a season healthy, and remain so.

“I’m thinking pretty positively, and I think the future is going to be pretty bright,” he said. “People should definitely expect to see a lot more from me this year, if I’m really full healthy, fully in shape.”

In the four games he played last season, Crabtree was one of UR’s first substitutes, and brought valuable across-the-board contributions though being “rusty and not in tip-top shape,” in his words.

Notes: The Spiders have two available scholarships for the current recruiting cycle. There are 20 UR players this season, including five walk-ons, with 15 scholarship recipients (two more than the normal limit) allowed because of NCAA policy regarding eligibility associated with the pandemic … Freshman guard Malcolm Dread will miss a few weeks with a knee issue that’s not serious.

Utah State’s first-year coach is Ryan Odom, a Hampden-Sydney graduate (Class of 1996) who was a Virginia Tech assistant coach. He spent the past five years as UMBC coach.

Also, UR assistant Nate Mulberg is a member of Team Israel's coaching staff.

Sports time capsule: What would have gone under The Diamond in 1984?

There is, reportedly, a time capsule underneath the Robert E. Lee statue, placed in 1887. What if this were a sports thing?

Richmond’s Connor Crabtree, a 6-6 transfer from Tulane, heads into his third year at UR having played in four games. Injuries have repeatedly interrupted his Spiders career.

UR’s Connor Crabtree was challenged by Hofstra’s Kevin Schutte at the Robins Center last season. Crabtree missed most of the season with a groin strain and stress fractures in his right foot. 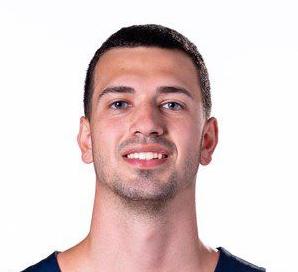