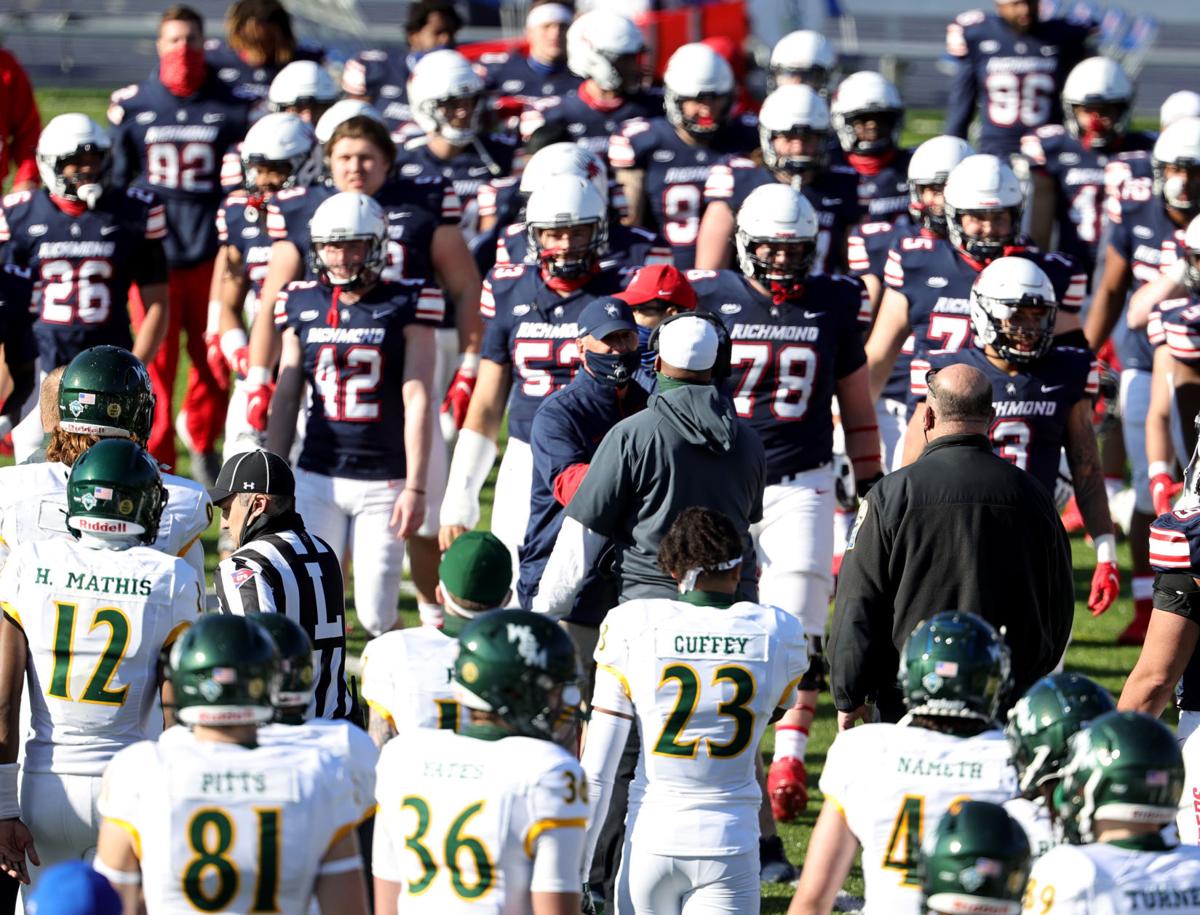 Richmond coach Russ Huesman and William and Mary coach Mike London greeted one another after UR’s 21-14 win on March 6 at UR’s Robins Stadium. 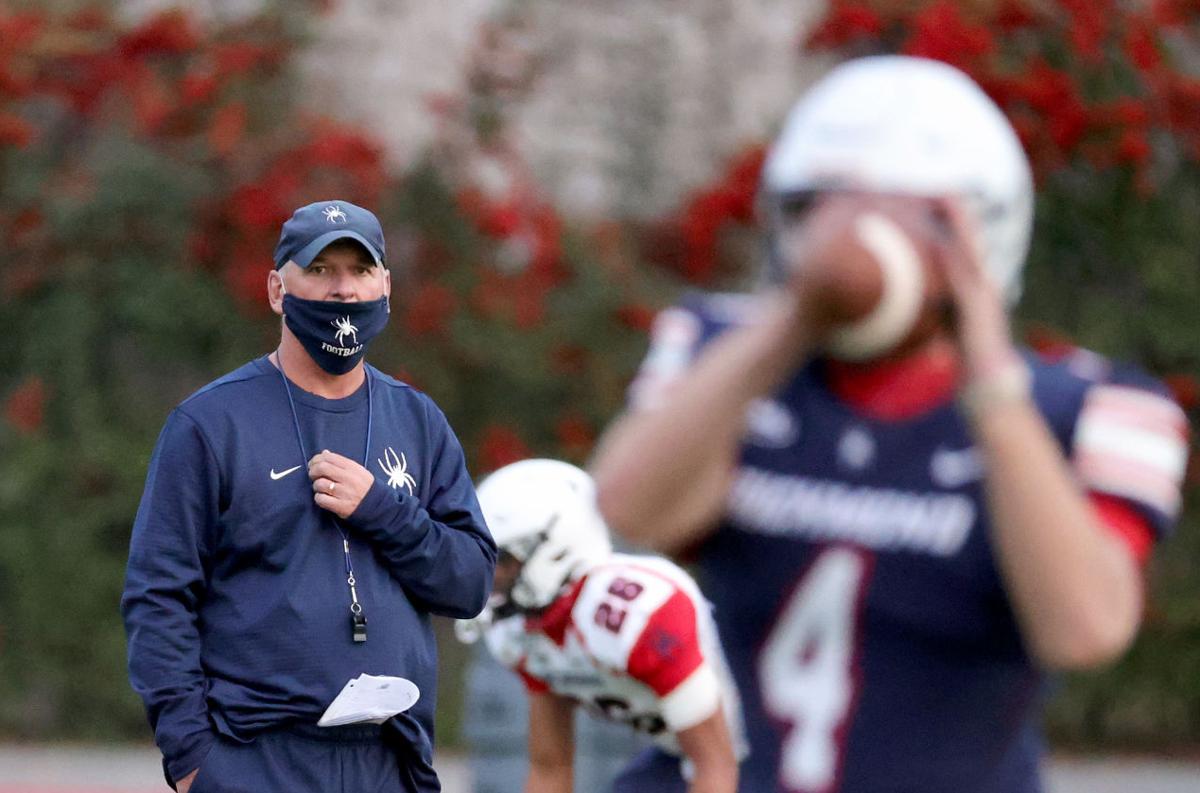 University of Richmond coach Russ Huesman: “We knew that we could get underneath a threshold pretty quickly, just based on our numbers this spring." 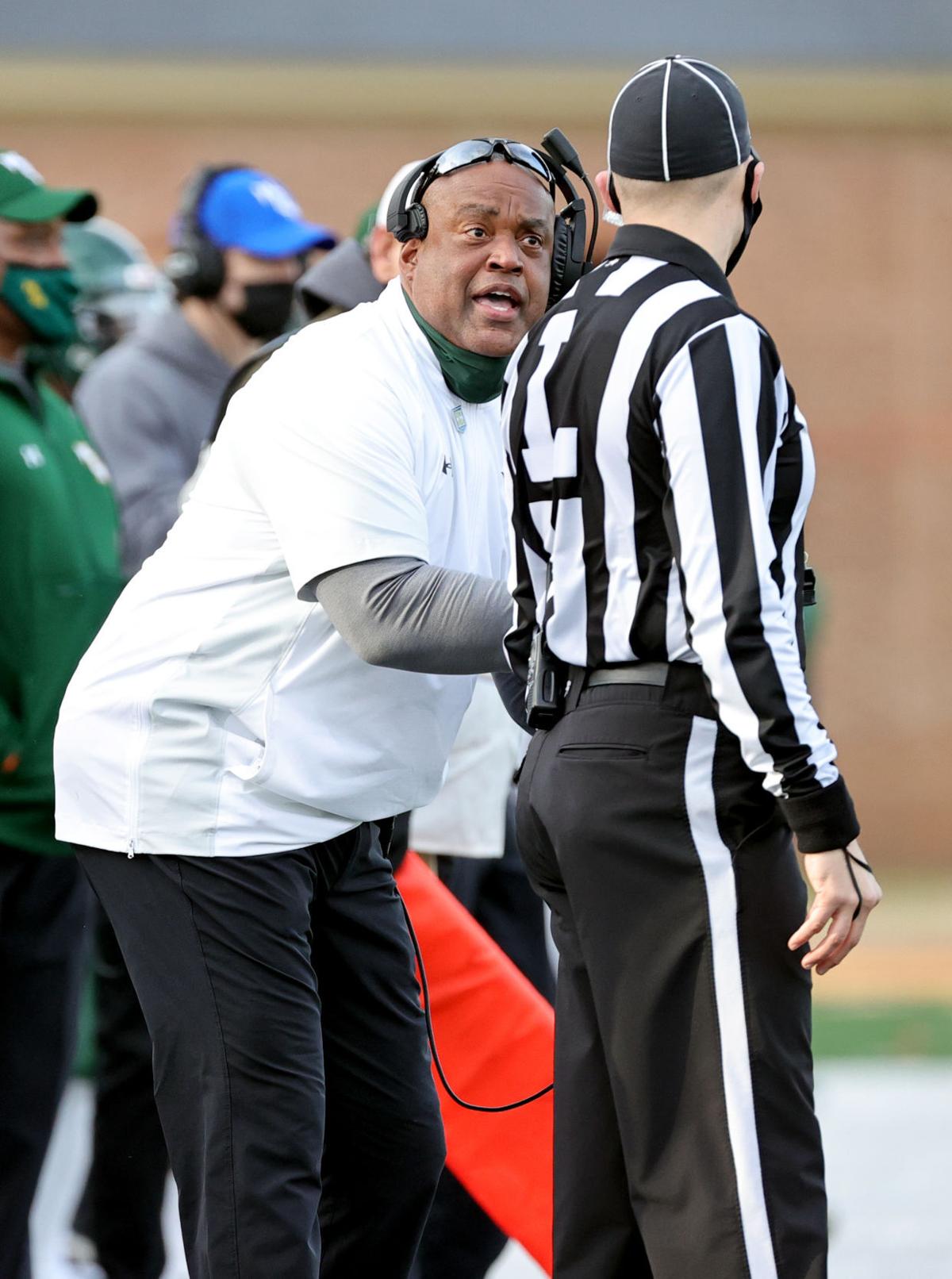 W&M coach Mike London noted that some Tribe players will require surgeries following the spring season and said, “sooner rather than later” is preferable on that front.

Game on, at least for now.

The University of Richmond (3-0, 3-0 CAA) is scheduled to play at William & Mary (1-2, 1-2 CAA) Saturday in the final regular-season game for both teams, as the CAA slate is currently constructed. The Spiders are coming back from a postponement against James Madison, and the Tribe also were idle last weekend because of a postponement at Elon.

The April 17 make-up date for teams in the CAA South — UR, W&M, JMU, Elon — remains vacant at this time, despite multiple postponements for UR, W&M and JMU, and one for Elon. UR coach Russ Huesman and W&M coach Mike London indicated Monday that it’s unlikely their teams will be active in CAA competition that day.

“There’s a lot of conversations going on between the [athletic directors] and the conference office, and I’m sure there’s a lot of juggling going on,” said Huesman. “We’re just listening and trying to figure out what’s best for us and the league, and everybody.”

London noted that some W&M players will require surgeries following the spring season and said “sooner rather than later” is preferable on that front. Also, the physical condition of all players is on London’s mind as he looks toward getting the Tribe ready for offseason conditioning that leads into summer camp for the fall season.

Huesman said the Spiders remain interested in participating in the FCS spring playoffs.

Richmond announced last Thursday that Saturday’s scheduled game between the No. 12 Spiders and visiting JMU (4-0, 2-0 CAA), the top-ranked team in the FCS, was postponed “due to COVID-19 protocols at Richmond.” Essentially, the game was called off because UR did not have a sufficient number of players at all positions to safely compete.

The Spiders’ number of available players fluctuates, as is the case for all football teams at all times. Richmond’s situation is different than most, however, because this relatively small private school doesn’t draw many walk-ons. Before any other applied roster-reducers, UR starts with fewer players.

In the spring-semester opener on March 6 between Richmond and William & Mary, the Spiders’ roster included 75 players, while the Tribe had 93. JMU has 100 players on its roster. The FCS scholarship limit is 63.

“We knew that we could get underneath a threshold pretty quickly, just based on our numbers this spring,” Huesman said.

In this spring-semester season, there are players who are being held out of practices and game competition because of injuries from past seasons. Some of those injuries required surgeries and medical staffs want longer healing periods so those players are fully fit for the fall season.

“We’ve got a lot of players at some positions,” said Huesman. “Other positions …”

Then, factor in Spiders who are disqualified from practice and competition because of recent COVID testing results or contact tracing. JMU and other CAA football programs experienced comparable shutdowns earlier in this spring season.

Some injured players returning to competition are “touch and go,” Huesman said Monday, and their status could determine whether Saturday’s game at W&M is played. Huesman said there could be Spiders at positions different than they are accustomed to playing as UR tries to provide sufficient numbers at each spot.

“A lot of [teams] are doing the same thing we’re doing,” he said. “There may be some scenarios where we are extremely outside the box on Saturday.”

In the spring-semester opener for W&M and UR on March 6, the Spiders won 21-14 at Robins Stadium.

UR-W&M Saturday game canceled: No. 12 Spiders will visit No. 1 JMU next Saturday

Among University of Richmond football players, there was no fight to secure the No. 99 jersey. This pleased Aidan Murray, who wanted those dou…

Some back-to-the-future action has driven the University of Richmond to a 3-0 record and a No. 12 ranking in the FCS poll heading into Saturda…

One of the five seniors in the University of Richmond men’s basketball program, guard Jacob Gilyard, announced Sunday that he would return to …

From UVA and Tommy John surgery to UR, catcher Drew Blakely returning to 'full stride'

It turned out to be an easy decision. Jacob Gilyard will return for fifth year as a Spider.

University of Richmond senior Jacob Gilyard began the season with the sense that four years of college basketball would be enough.

He developed a spring habit of watching video of games soon after they're completed.

Richmond coach Russ Huesman and William and Mary coach Mike London greeted one another after UR’s 21-14 win on March 6 at UR’s Robins Stadium.

University of Richmond coach Russ Huesman: “We knew that we could get underneath a threshold pretty quickly, just based on our numbers this spring."

W&M coach Mike London noted that some Tribe players will require surgeries following the spring season and said, “sooner rather than later” is preferable on that front.