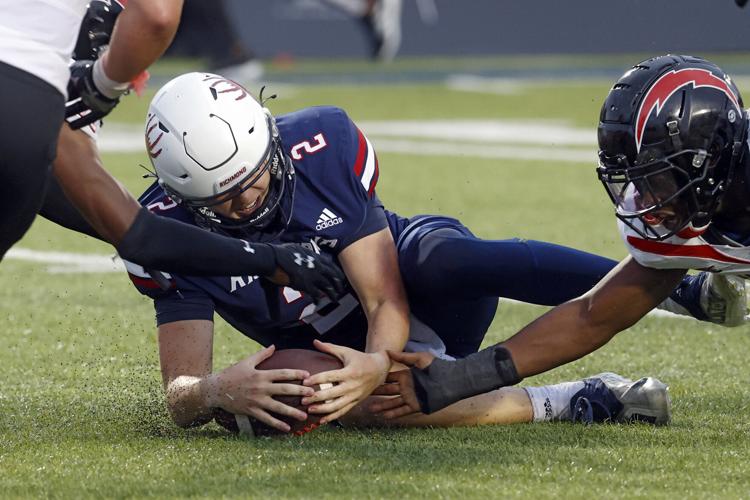 Though in position to recover, University of Richmond quarterback Reece Udinski lost a fumble at the Saint Francis two late in the first half Saturday night at Robins Stadium. 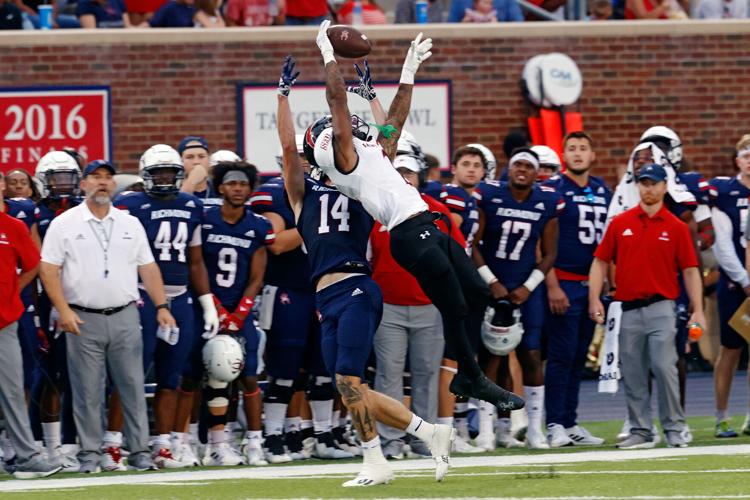 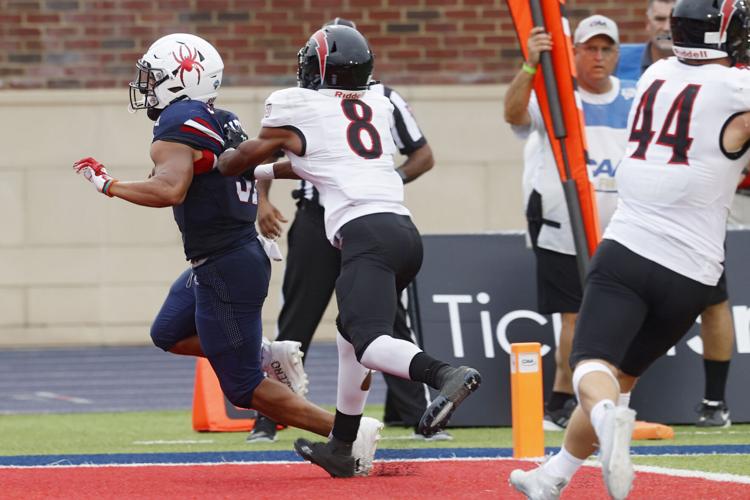 UR tailback Savon Smith scores on a 5-yard reception Saturday during the first half of the Spiders' win over Saint Francis (Pa.) at Robins Stadium. 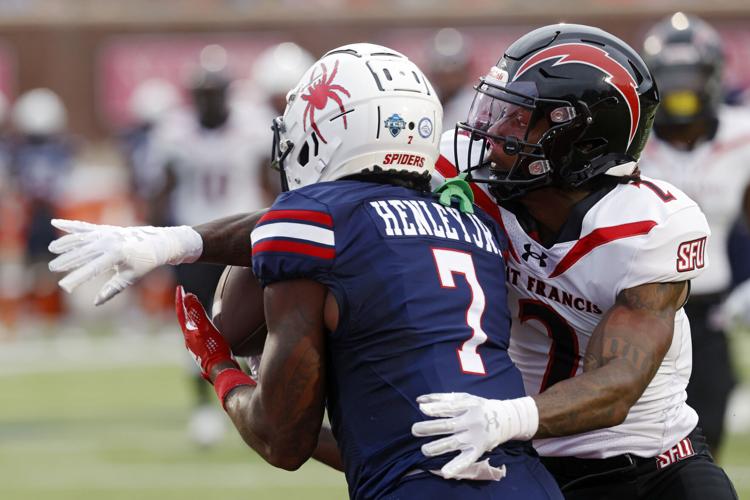 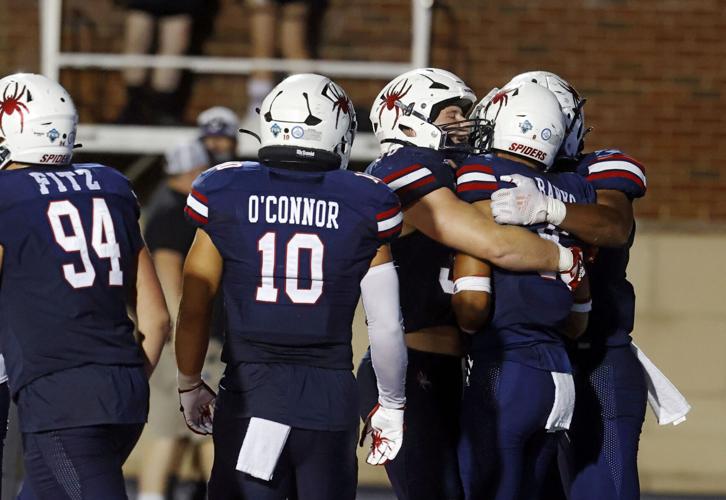 UR’s Aaron Banks is congratulated by a number of teammates Saturday after scoring a touchdown on an interception late in the game to seal the Spiders’ victory over Saint Francis (Pa.).

The transfers brought in by the University of Richmond to provide an offensive spark this season did that Saturday night at Robins Stadium. The Spiders needed their thrust to get past Saint Francis 31-21.

So this was perhaps not as dominating an evening as Spiders’ supporters might have liked to see, but it didn’t turn out badly for UR after falling behind 6-0 and losing a fumble at the SFU 2 late in the first half.

The Spiders closed with a defensive highlight: an interception and 35-yard scoring return by Aaron Banks with 1:22 left. The Red Flash had possession around UR’s 15, and trailed 24-21, when Banks made his play on an overthrow.

“I think we got pressure on [the QB] ... and he just threw it up and nobody was there but me,” said Banks. “So I think that was probably credit to the linebackers and the D-line.”

Tailback Savon Smith rushed for a career-high 123 yards on 21 carries for UR as the Spiders picked up 487 yards.

“Probably should have had way more points, I think,” said Richmond coach Russ Huesman. “We moved the ball right down the field. We execute on offense. ... Defensively, we’re not very good. We’ve got to get better, no question.”

Richmond (1-1), facing the 6-0 deficit, began moving behind completions of 18 and 12 yards involving VMI graduates, quarterback Reece Udinski and receiver Jakob Herres. Those drove UR to its first touchdown. A 25-yard reception by Nick DeGennaro, a transfer from Maryland, got the Spiders out of a field-position hole and on their way to their second TD in the first half.

“We didn’t come out the way we wanted to,” said Banks.

Udinski completed 29 of 38 attempts for 263 yards and three short touchdowns. Herres had six receptions for 79 yards, and DeGennaro added three catches for 49 yards.

The Spiders opened last weekend with a 34-17 loss at Virginia, and mostly encouraging signs came from that game (no turnovers, no offensive penalties). UR’s home opener did not start in an encouraging way. Richmond drove to SFU 35 but failed on third-and-1 and fourth-and-1.

That was a theme repeated. UR gained 294 first-half yards (to SFU’s 181) but did not fully take advantage of advantageous field position. The Spiders settled for a 30-yard field goal from Jake Larson to lead 17-13 in the third quarter.

Richmond led 14-13 at halftime, though it appeared the difference would be larger. Udinski lost a fumble at the end of a scramble at the SFU 2 with 16 seconds left in the second quarter.

UR in the first half scored on Udinski completions to Smith (5 yards) and Aaron Dykes (16 yards), who was sharing tailback rotations with Smith. Dykes left in the third quarter with what appeared to be a right shoulder injury.

“It’s never easy. Somehow, we gutted it out,” said Huesman. “Our offense got some first downs and obviously our defense stepped up the last two [SFU possessions] with picks by Aaron Banks and got it done.”

The Red Flash (0-2) are in the midst of a schedule that begins with four road games.

The Spiders visit Bethlehem, Pa., and Lehigh Saturday in their final game outside of CAA Football competition. Lehigh’s Mountain Hawks, picked to finish fifth in the seven-team Patriot League, began their season with a 45-17 loss at Villanova, the CAA Football favorite.

UR’s 45th hall of fame class will be inducted Friday, Nov. 4, and introduced during the football homecoming game on Nov. 5.

Spiders' weekly word: 'Up front, we take pride in not letting No. 2 get hit'

Quarterback Reece Udinski has started the season like an FCS All-American. Keeping him upright leads the Spiders' to-do list.

“Whenever we know that somebody’s going to come and try to beat us, we’ve got to make sure we set the tone and we make them realize who the best team really is.”

The University of Richmond has all three basketball levels covered with its Class of 2023 recruiting: point guard, wing, and now big man.

"I think we just did well executing whatever (the Mountain Hawks) gave us."

“Offensively, way ahead (of defense). And that’s probably the way it should be. We’ve got a lot of older guys on the offensive side of the ball, a lot of guys that have played a lot of football."

Though in position to recover, University of Richmond quarterback Reece Udinski lost a fumble at the Saint Francis two late in the first half Saturday night at Robins Stadium.

UR tailback Savon Smith scores on a 5-yard reception Saturday during the first half of the Spiders' win over Saint Francis (Pa.) at Robins Stadium.

UR’s Aaron Banks is congratulated by a number of teammates Saturday after scoring a touchdown on an interception late in the game to seal the Spiders’ victory over Saint Francis (Pa.).