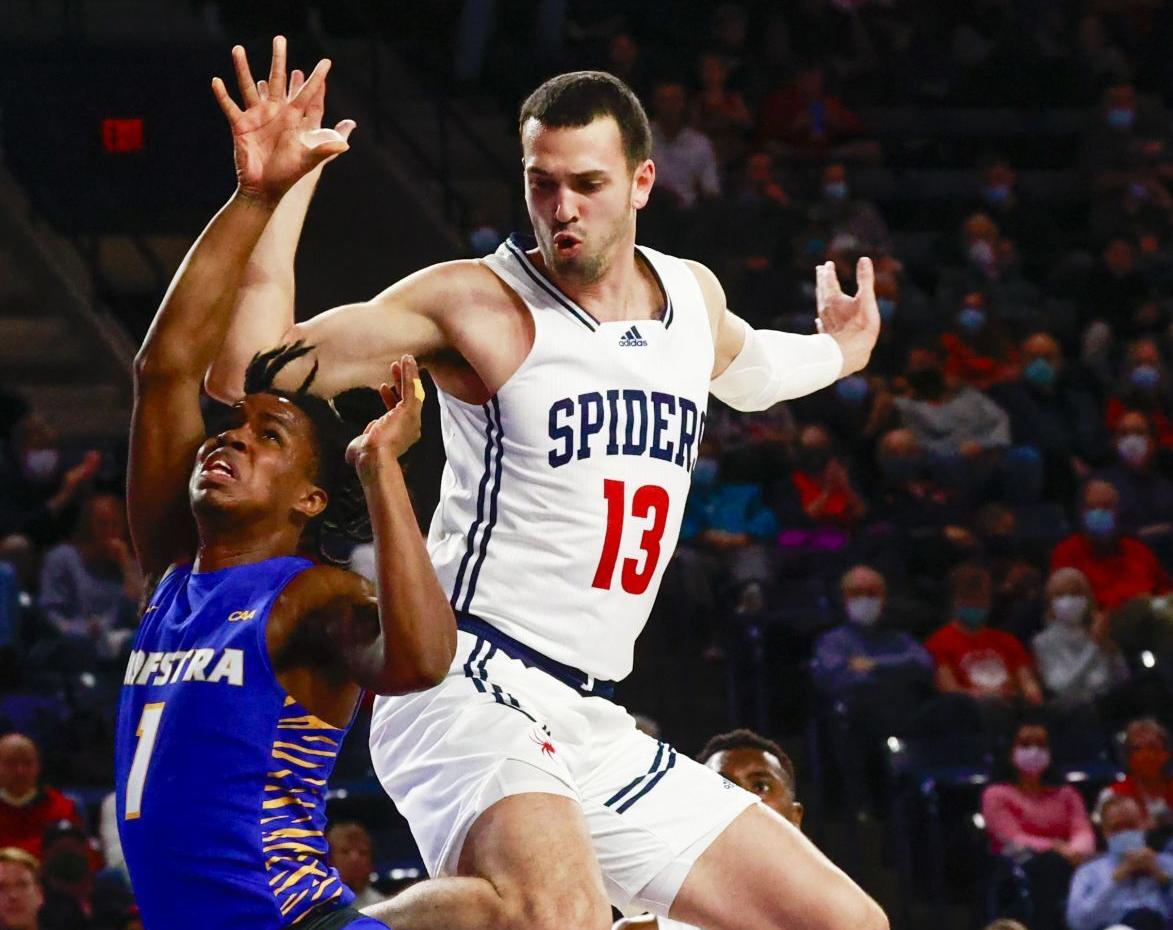 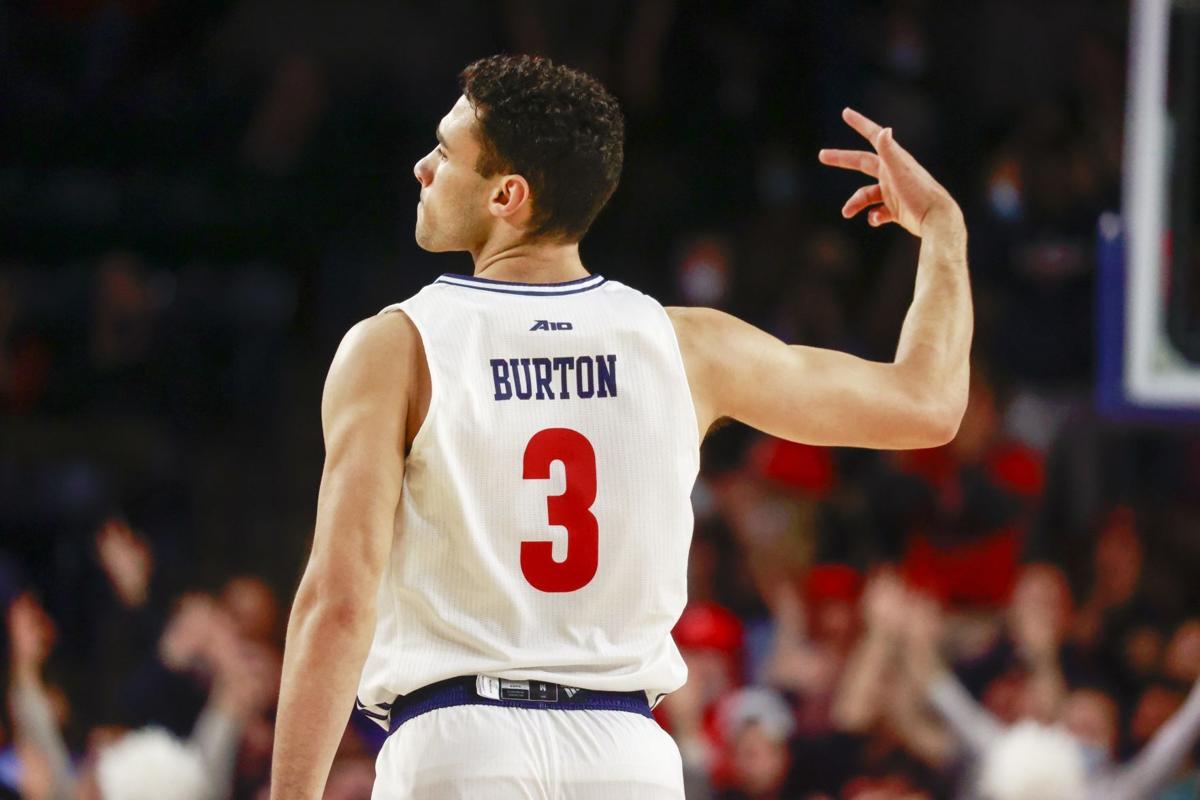 Richmond forward Tyler Burton (3) celebrates his three points during a NCAA basketball game between Hofstra and Richmond on Monday, November 22, 2021 at Robins Center in Richmond, Virginia. 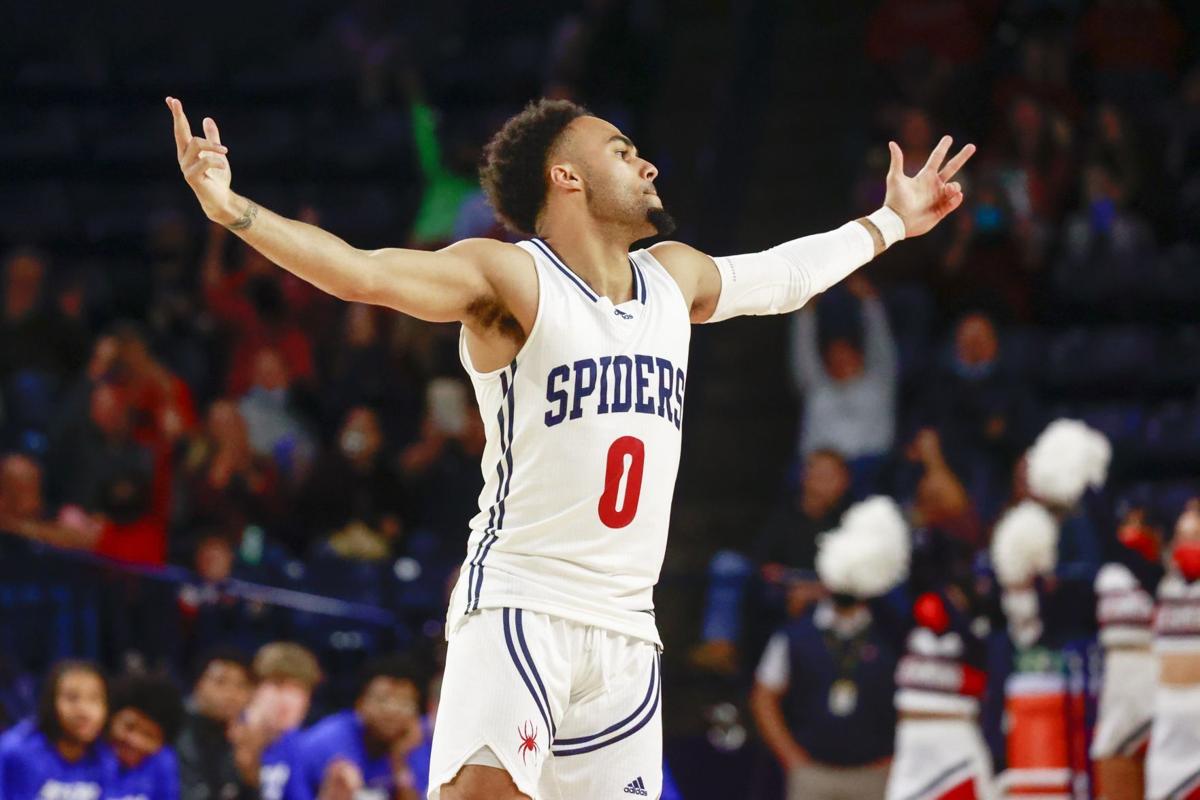 Richmond guard Jacob Gilyard (0) celebrates his three pointer during a NCAA basketball game between Hofstra and Richmond on Monday, November 22, 2021 at Robins Center in Richmond, Virginia.

Chris Mooney broke out the whiteboard during a break late in the first half. Mooney, in his 17th year as the University of Richmond’s coach, hardly ever draws up stuff during games, especially with a veteran team. This season, he’s guiding his most experienced group.

But Hofstra baffled the Spiders for quite a while Monday night. Freewheeling on offense and funky on defense, the Pride brought a devilish style to the Robins Center. Richmond shot 58% and hit 13 3-pointers to win 81-68 after trailing by 14 in the first half.

“We imposed our will on the game, even though they imposed theirs to start,” Mooney said.

Hofstra, shortish and feisty, worked the perimeter for 3-point openings, and zipped inside when the Spiders spread too wide. On defense, the Pride double-teamed the low post — usually 6-foot-10 Grant Golden (13 points on 6-of-7 shooting — and dared Richmond to hit a bunch of 3s.

Then Mooney asked for the whiteboard. Almost immediately, the Spiders operated with some high-low action that set the table for power buckets from Golden and 6-7 Nathan Cayo (18 points on 9-of-11 shooting). And then when the Hofstra coaches yelled for ball pressure, Golden hit Cayo on a back-cut for an easy 2.

“In the first half, we were trying to get it inside to [Golden], or get it inside to myself, and it really wasn’t working,” Cayo said. “Once we started going high-low in the middle, it opened it up for us.”

“I really anticipated they would have a run like they had to start the game, but hoped it wasn’t at the beginning of the game,” Mooney said. “They’re so good on the ball screen, they’re so calm, they’re so capable of making hard shots, and they started the game on fire.”

Hofstra (1-4), which beat Richmond 76-71 at the Robins Center last December, played its fifth consecutive road game to begin the season. Leading the Pride are the backcourt duo of 5-foot-11 graduate student Zach Cooks (19.9 ppg) and 6-2 graduate student Jalen Ray (19 ppg), a Hampton High graduate who scored 23 against the Spiders in last season’s meeting.

Hofstra, picked to finish fifth in the CAA, came in averaging 11 3-pointers. Knowing the Pride like to shoot 3s and stopping them from doing so? Different deals.

Hofstra made four in the first four minutes to lead 16-6 and the Spiders were forced into chase mode. Richmond had to hit six 3s to keep up in the first half, after which the Pride led 44-40.

Burton, a junior forward, went for a career-high 30 Saturday when the Spiders lost 73-70 at Drake. He kept it going with 14 first-half points Monday.

Next: The Spiders play Thursday and Saturday in the Baha Mar Hoops Bahamas Championship in Nassau, Bahamas. The tournament is being held at the 4,000-seat Baha Mar Convention Center and Thursday, UR meets Maryland (4-1), which has faced a pair of A-10 teams, winning 71-64 over George Washington and losing 71-66 to George Mason.

The Terps have not played outside College Park, Md. The UR-UM game will be televised by the CBS Sports Network.

The tournament continues Saturday with the championship game at 10 a.m. (CBS Sports Network) and consolation game at 12:30 p.m. (FloSports), with Louisville and Mississippi State the other two teams involved.

Richmond forward Tyler Burton (3) celebrates his three points during a NCAA basketball game between Hofstra and Richmond on Monday, November 22, 2021 at Robins Center in Richmond, Virginia.

Richmond guard Jacob Gilyard (0) celebrates his three pointer during a NCAA basketball game between Hofstra and Richmond on Monday, November 22, 2021 at Robins Center in Richmond, Virginia.